I Joined a Waitlist to Try $25 Vegan Yogurt. Here’s What It’s Really Like.

Is The Coconut Cult worth the price tag? 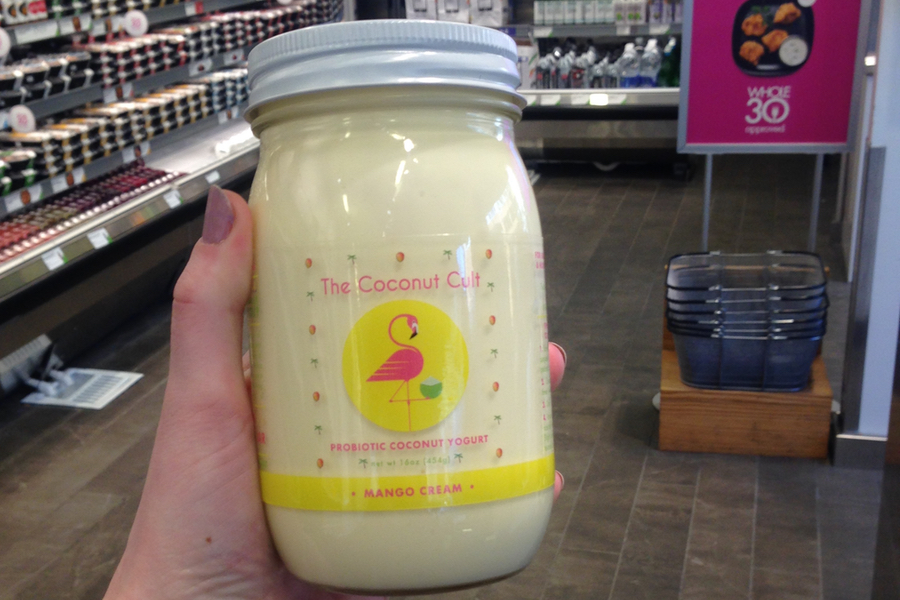 Cult-followed, probiotic-filled The Coconut Cult yogurt is currently only available at one spot here in Philly — Snap Kitchen’s Rittenhouse location (1901 Chestnut Street). And even though a mason jar of the stuff rings in at a whopping $25, it’s flying off the shelves.

As a vegan, I’m always up for trying non-dairy dairy products. My favorite yogurt currently is Kite Hill Greek-style. It packs ten grams of protein, with very little sugar, and it tastes great. I even use the plain unsweetened version in savory dishes as a substitute for sour cream.

So, of course, when The Coconut Cult hit shelves in Philadelphia, I had to try it. As the Be Well Philly HQ is out of range for delivery from that location, I stopped by Snap’s Rittenhouse location one morning. However, I was met with barren shelves where The Coconut Cult should be. Even worse, I had to join a waitlist if I wanted to get my hands on a jar of my own. But because I’m a card-carrying millennial, I promptly gave my name and number and awaited my opportunity to spend $25 on 16 ounces of breakfast goop.

A week later, I got the call. The shelves had been replenished, and Snap had set aside a jar just for me. Though others on the waitlist had reserved multiple jars, one container of the Mango Cream flavor was good enough for me. Somehow, I restrained myself from grabbing a spoon and cracking into that bad boy right outside of Snap Kitchen.

When I finally did open the jar, I was surprised by the texture. I was expecting it to be a pretty thick, but it’s actually a fairly runny yogurt — more Ranch dressing than sour cream. As for the taste, it isn’t overly sweet. Though it’s made with organic mangos and some organic orange juice, there’s only one gram of sugar in a serving. Overall, the mango influence is pretty light. Rather, the coconut-based mix packs a pungent yogurt-y flavor — a similar sharpness you’d get from unsweetened Greek yogurt.

Since I got my jar, I’ve enjoyed a tablespoon or two every day, either on its own or drizzled over a vegan scone or with some fruit and hemp seeds — all of which were super tasty. Of course, one of the big selling points of the yogurt is the probiotic-rich recipe. Though I can’t pretend to see inside my gut, I’ve got to say: I don’t feel any different. Granted,  I started off with a light “dose” as not to freak out my insides.

Now, let’s get down to what I’m sure you’re all wondering: Is it actually worth the price tag? Well, not really. This isn’t to say I don’t like it or wouldn’t buy it again in the future, but it definitely isn’t going to be my weekly vegan yogurt purchase.

While nutritionally, I will say The Coconut Cult ranks above some other vegan yogurts I’ve tried — like Almond Dream Yogurt, which is sugary and low in protein — by a long shot. For my daily yogurt needs, though, I’ll be sticking with Kite Hill. Because, really, $25 is a ridiculous price for yogurt, even by my millennial standards — and especially if it’s runny.

The Coconut Cult is once again sold out today at Snap Kitchen, but if you’re desperate to try it, hit up the waitlist like I did. Got recommendation of your favorite vegan yogurt? Share with us on Facebook (we’re always open to suggestions!)