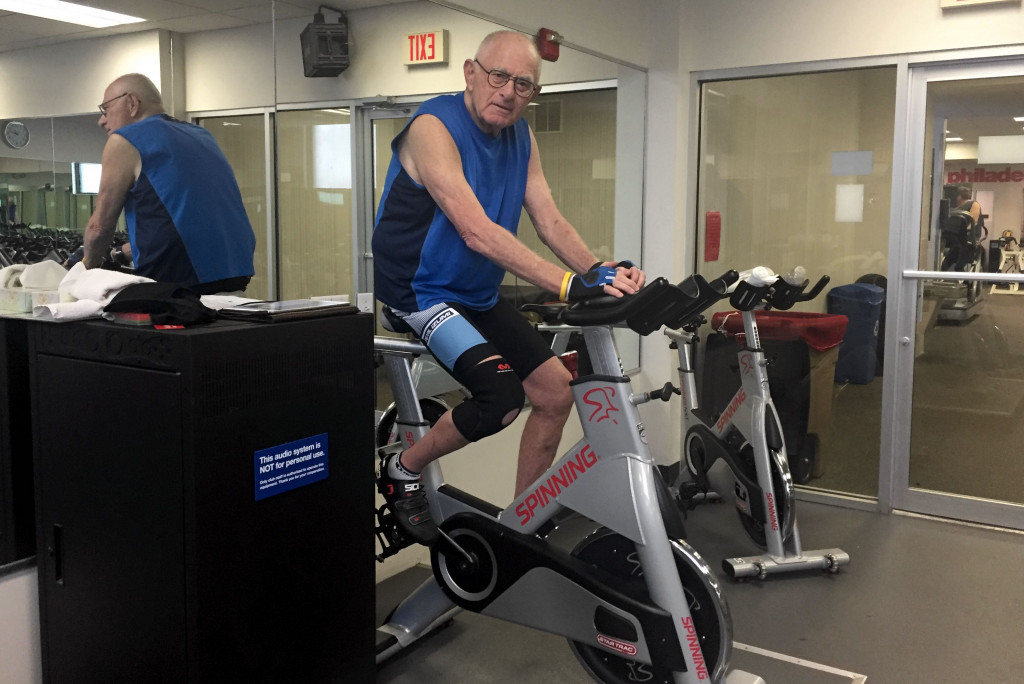 I asked him to smile. He said he’d rather look tough. Photograph by Caroline Cunningham

These days, it’d be easy to think indoor cycling is only for skinny women with an affinity for Lululemon leggings. Steve Kane is the proof that that isn’t the case.

Kane, a Society Hill resident, has been teaching spin classes at Philadelphia Sports Club for 18 years. Nowadays he typically teaches three classes a week — sometimes more if he’s subbing for someone else.

“The max that I’ll do now is four classes a week, although over Thanksgiving I did five,” he says. “I don’t want to brag, but I just turned 79.”

But Kane isn’t just some guy who’s been doing this a long time. He’s, quite possibly, Philadelphia’s most passionate resident when it comes to indoor cycling. He calls himself a “recruiter” and his class attendees a “cult.” He writes out his workout playlists by hand in a notebook before every class. He’s kept a diary of every single ride he’s led since 2005, including his thoughts on how well the ride went. He’s meticulous, and he loves every minute of it.

So what can we learn from this almost-octogenarian, who could probably wipe the floor with us in a spin class? To start, you don’t have to already be in amazing shape to take up indoor cycling.

“When [Philadelphia Sports Club] opened, I only lived three blocks away. I had never belonged to a gym,” says Kane. “I was 30 pounds overweight and I started spinning. It killed me. I lasted seven minutes in my first class.”

A year into it, he’d lost the excess weight. According to Kane, he got his start at the front of the classroom one day when the instructor couldn’t make it, and he volunteered to fill in. A longtime high school sports coach, Kane saw teaching as something of a calling.

Another important aspect of teaching? Making sure you’ve got a full classroom.

“They call me the ‘Great Recruiter’ here because I see people working out, and I say, ‘You’re not getting a bang for your buck! You’ve got to try spin.’ So I invite them in — now it’s my job to keep them,” says Kane.

Part of keeping people in the classroom, according to Kane, is having good music. For Kane, that could mean everything from Marvin Gaye to Maroon 5 to reggae (“Nobody uses reggae!”) to EDM. Having lame music in class is a good way lose students.

“The music is so key,” says Kane. “I know people that are great instructors, and their music is so bad that people won’t go to their class, and yet they give as great a ride as you can get.”

But keeping people in class doesn’t mean going easy on them. Kane likes to tell participants he wants them to sweat “waterfalls” — because mere beads of sweat are “not good enough.”

Probably the biggest lesson we can learn from Kane is that staying in shape is for every body — no matter your age, sex, color, shape, or size. Kane says he has people in his class who are in their 50s, 60s, and 70s, and that with spinning, they have the freedom to go at their own pace. While Kane himself has had five leg surgeries — which he blames on years of running and playing basketball — he’s currently pain-free, and he hasn’t seen any new injuries since he started spinning. He says he’s been told he’ll need knee replacements “down the line” (“I’m 79 now! How far down the line do you think I’m going?”), but he plans on continuing to teach for as long as he feels he’s doing a good job. He loves it too much to stop any sooner.

“My whole life is in the spin room,” says Kane. “I don’t hang with people my age too much. It’s the young ones — they all want to go out to lunch, to brunch, and we have a breakfast club. We just have a real good time with it, and everybody cares about everybody else. We’re like a community. We’re a cult.”

Steve Kane is hosting a free spin class at Philadelphia Sports Club as a part of Dr. Vicki Bralow’s Beginner-cise series on December 15. Sign up to join here.