"I'm hanging up my racing flats, at least for a while." 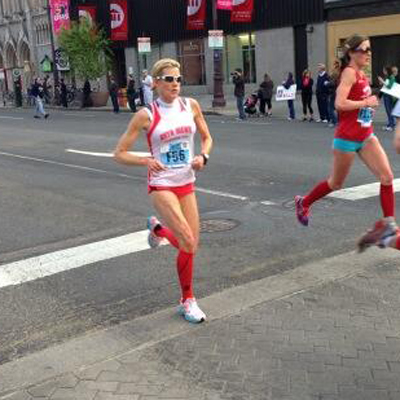 Along with being a beloved Philly meteorologist for 6 ABC, Cecily Tynan is also a much-loved member of the Philly running and fitness community. Her Facebook page features a mix of work stuff (weather forecasts and the like) and workout stuff. (Remember that time she rescued a baby owl during a trail run and documented the whole thing on Facebook?) She’s also known for her super-detailed Broad Street Run weather forecasts, which is why it’s kind of a bummer to hear that this year, she won’t actually be running the Broad Street Run alongside the other 40,000 folks who’ll take to the streets on Sunday, May 7th.

Yesterday, Tynan — who ran last year’s Broad Street Run in a very impressive 66 minutes, and has won her division in the past — posted her award from last year’s race on Facebook, saying, “This is my last Blue Cross Broad Street Run award. I’m hanging up my racing flats, at least for a while … A lot of people have been asking me if I’ll be running Broad Street, and my usual spring road races, and are surprised when I say ‘no.’”

She went on to explain that, while running and racing have been a huge part of her life (seriously — read the full post. The woman has done a LOT of racing.), her kids come first these days. She says, “My priorities have changed. Both my children are on travel soccer games. And, when I race, I often miss cheering on my kids from the sidelines. Even on days with later games, sneaking out at the crack of dawn means missing some quality lazy breakfast time with my kids. As I see them growing up at warp speed before my eyes, I realize those lazy breakfasts are quality, fleeting moments. Races will still be around long after my children are grown.”

But don’t get it twisted: Tynan isn’t done running — just racing, for now. She says in the post that she still runs five to six days a week, and she looks forward to continuing to pass along training advice to fellow runners. And of course we can all still count on Tynan for solid what-to-wear advice on race days. She was spot-on about those trash bags last year.