Your Guide to Philadelphia’s Fairmount Park 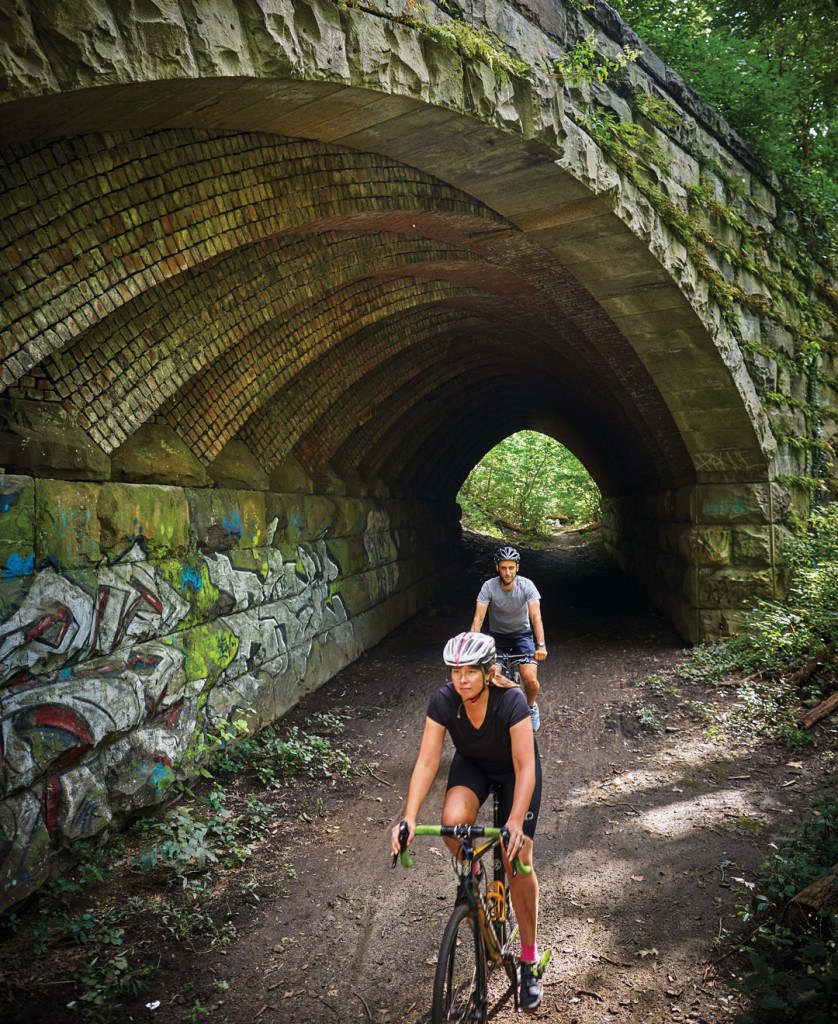 Here’s how to make the most out of Fairmount Park.

Get away from the crowds. 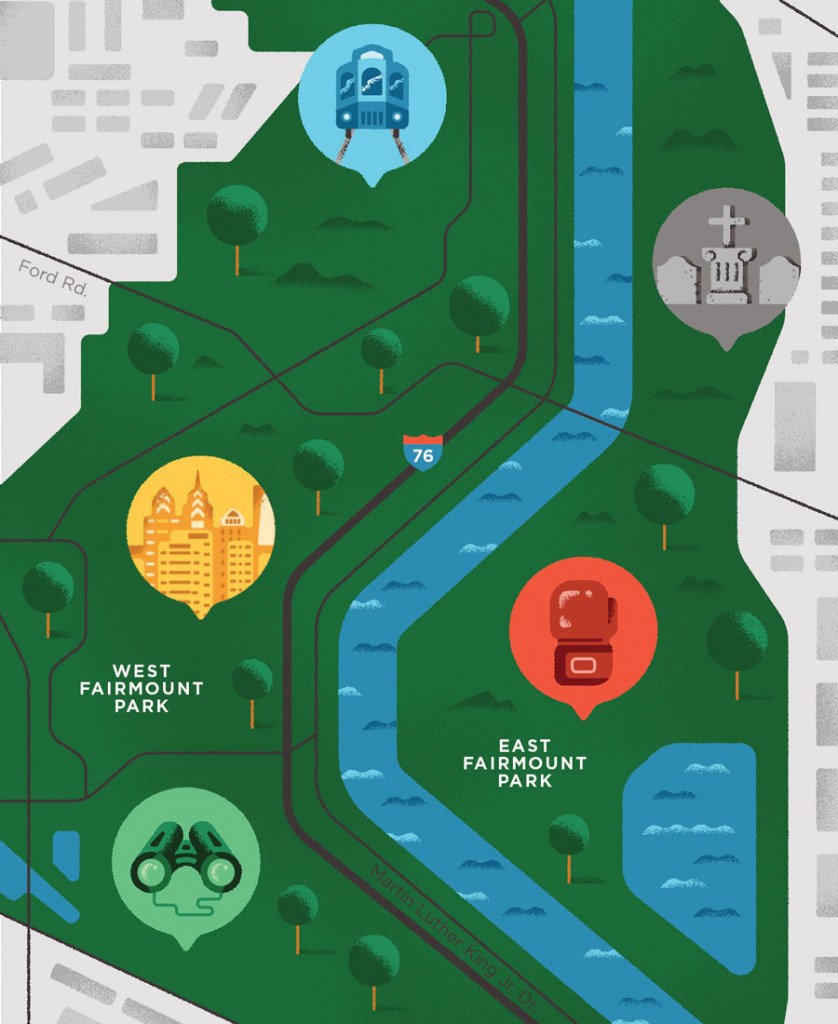 Boxers’ Trail
This trail got its name because Philly fighter “Smokin” Joe Frazier used to train here. Today, it’s a 3.8-mile gravel-and-dirt path that winds you past historic mansions and the reservoir and high above Kelly Drive. How to get there: Pick up the trail off Mount Pleasant Drive on the east side of the park.

Laurel Hill Cemetery
This 78-acre plot (get it?) isn’t technically in the park, but it might as well be. Ramble along the paved paths on your own, or grab an entertaining audio tour. And don’t dismiss the sweat opp: You can easily fit in three miles, and there are plenty of hills to work those legs. How to get there: Enter through the gatehouse on Ridge Avenue; there’s an overflow lot across the street.

Trolley Trail
Trolleys ran through Fairmount Park until 1946 (one of the stops: an amusement park!), and now the tracks are being converted into a paved trail. One and a half miles of the 4.5-mile path are currently complete. Expect to go through tunnels (some date back to the 19th century), over old bricks, and under a canopy of trees. How to get there: Pick up the trail behind Chamounix Mansion hostel, which is just off MLK Drive; parking is free.

Belmont Plateau Trails
This open swath of elevated land is best known for its incredible skyline views. But it’s also home to many a cross-country meet, so it’s got great running trails, too. Take the one that goes around the baseball fields and into the woods for a three-mile loop, and don’t worry about jumping on a side trail; they all eventually wind back to the main path. How to get there: Use the parking lots for the baseball fields, just off Montgomery Drive.

Sightseeing Trail
There’s a path that takes you from the Horticulture Center around the reflecting pool, over to Shofuso Japanese House and the Pavilion in the Trees. Some of it is along a road, but it’s a nice 25-minute-ish stroll, especially when the leaves change in the fall and the cherry blossoms do their thing in the spring. How to get there: There’s a free lot across from the Horticulture Center, which is off Belmont Avenue.

Think this glasshouse is only for weddings? Here are three Horticulture Center Events that will warm up your season.

Glow in the Park 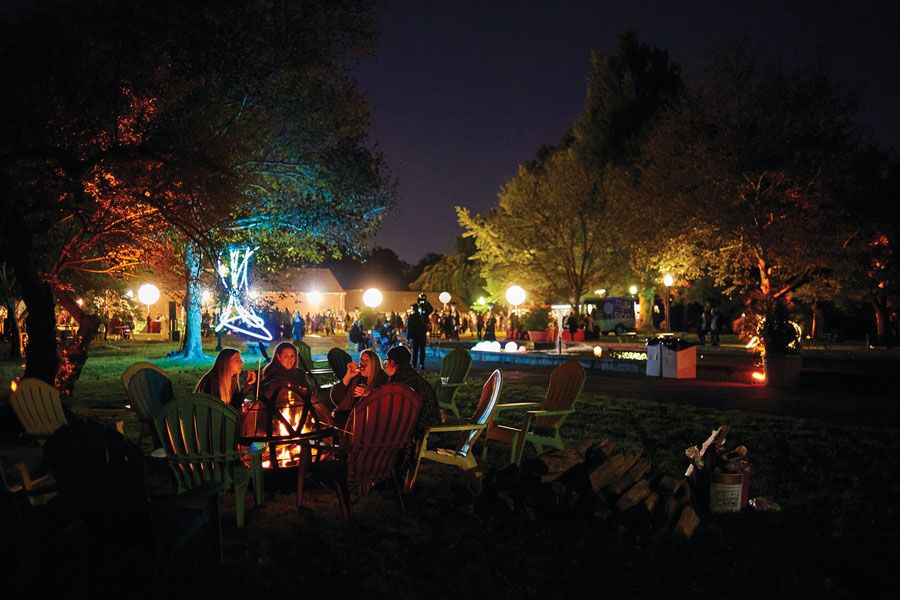 Glow in the Park. Photograph by Albert Yee/Fairmount Park Conservancy

This annual park fund-raiser takes advantage of Philly’s unbeatable fall weather with live music, food and drinks outdoors. But the best part is that it’s in the evening, so expect fire pits and maybe illuminated art. October 17th.

Getaway at the Greenhouse 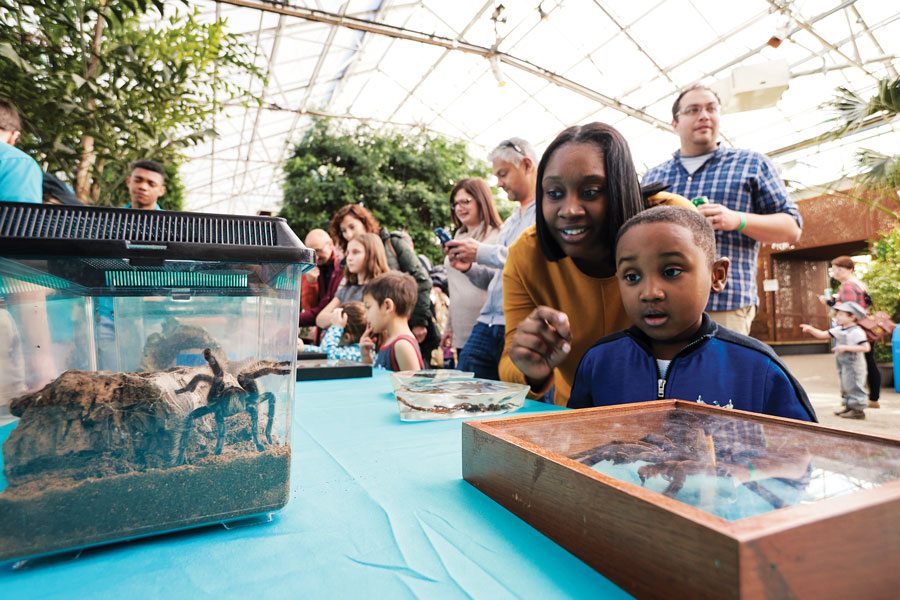 Getaway at the Greenhouse. Photograph by Albert Yee/Fairmount Park Conservancy

Last winter, the Hort staff turned the conservatory summery in the dead of winter. (Think: heat, greenery, live music, a giant sandbox and food trucks.) It was so popular, they’re doing it again. February 1st through 16th.

Familiarize yourself with all the big projects on the horizon. 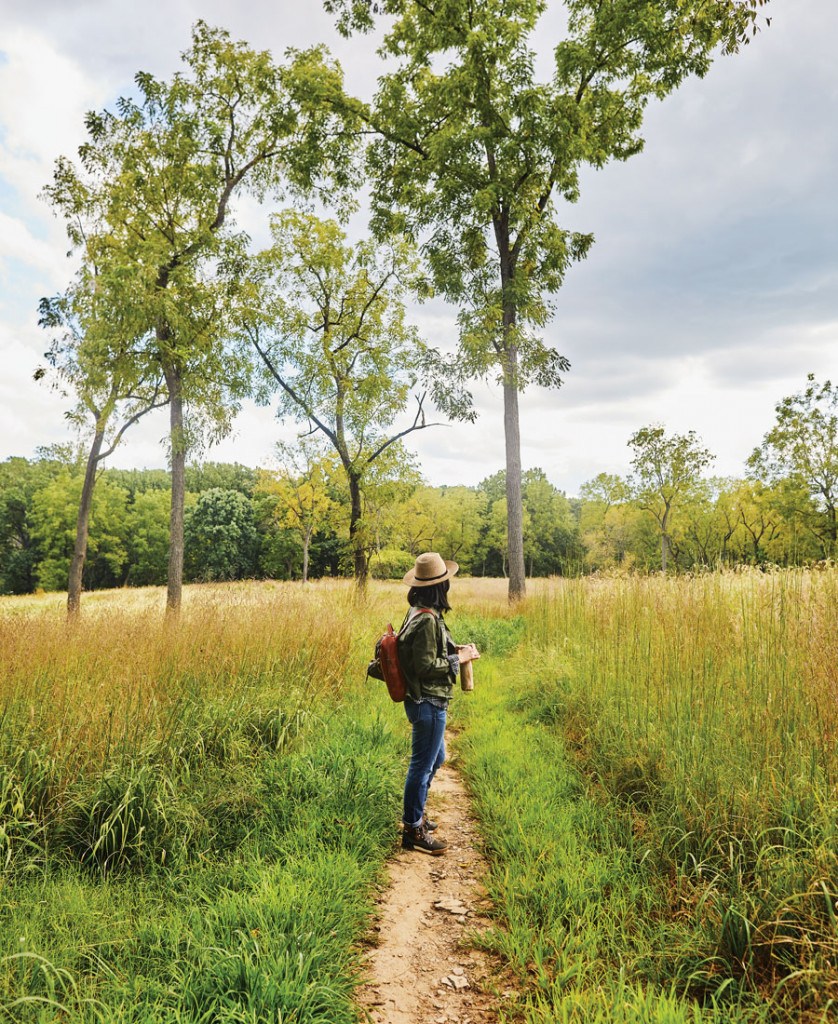 The Trolley Trail will get longer.
Once complete, the 4.5-mile loop will link up with other trails and park hot spots. It will also keep hikers and bikers from going off-trail and messing with the ecosystem.

The Horticulture Center will get lots of new trees.
If the surrounding forest looks a little bare, don’t panic: There’s a restoration project under way to remove non-native and invasive species and plant new indigenous trees (hickory, oak, beech, etc.) to create a high-quality forest that’s a nicer home for wildlife.

There will be more programming.
The Oval pop-up in front of the Art Museum is like “our test kitchen,” says Patrick Morgan, first deputy commissioner at Philadelphia Parks & Recreation. Meaning: They’ve had a lot of success with different activities there (games, events, food) and are applying what they’ve learned to other areas of the park. “We want to staff the neighborhoods and not just the facilities.”

Existing spaces will be reused smartly.
The city is considering how it uses its current resources. Would that rec center that sits empty be better as an artists’ studio? It hopes to encourage kids and community members to create these sorts of initiatives.

Centennial Commons will get more new stuff.
This new park-within-the-park (in front of the Please Touch Museum along Parkside Avenue) has fresh walking paths, giant porch swings, and lots of new trees. But that’s just the beginning: Expect a play area for kids in the future.

Fairmount Park by the Numbers

It’s not always easy to tell, but Fairmount Park is pretty damn impressive.

6,910
Miles that artisans from Nara, Japan, travel when the roof at Shofuso Japanese House needs to be repaired. (It’s made from a type of Japanese cypress that only those guys know how to fix.)

19
Number of zip lines at the year-old Treetop Quest adventure.

4,572
Pounds of food grown at the Carousel House’s farm in 2018. (And all of it was distributed to the nearby Parkside neighborhood and through the CSA.)

50
Average number of couples tying the knot at the Horticulture Center per year. (That’s almost one a week!)

152
Number of sculptures in the park. Night, a bronze near the Hort, was the park’s first purchase, in 1872.

16
Creeks that run through the park. (Not super-interesting; it’s just funny to make Philadelphians say “cricks.”)

Published as “Take a Walk On the Wild Side” in the October 2019 issue of Philadelphia magazine.