Whether you want to stay within city limits or journey five hours to a 600-foot-tall suspended walkway for panoramic views, we’ve got you covered with the best places to find fall foliage in Pennsylvania. 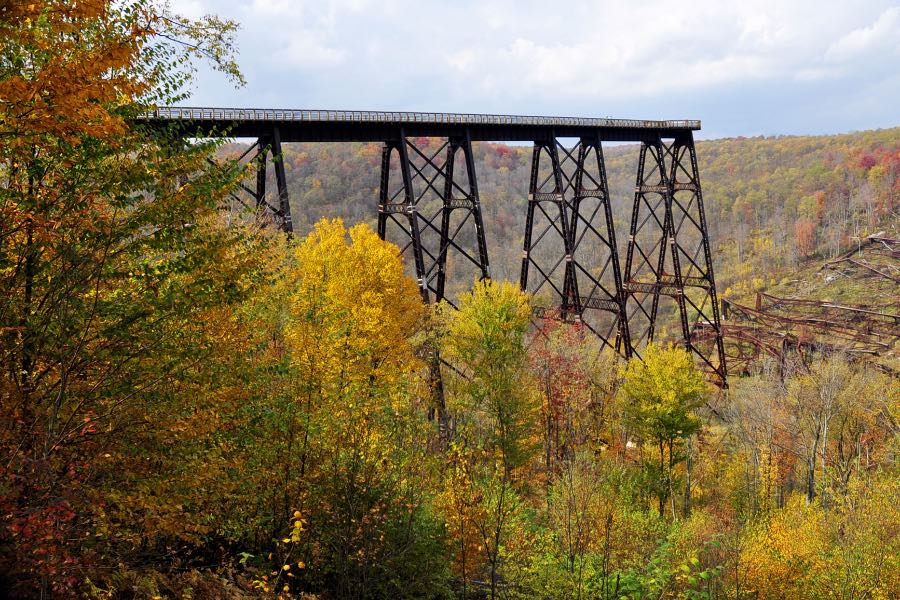 It’s back, baby! Fall foliage season, the most colorful, leafy, Instagram-y time of the year. And where better to celebrate than Pennsylvania (you know that name means “Penn’s woods,” don’t you?), land of more than 100 different species of deciduous trees?

Those deciduous trees are extremely diverse, ranging from northern hardwoods (your maples, birches and cherries, known for their vibrant red and burgundy colors) to southern oak-hickory forests (your … oaks and hickories, known for their yellowish-orange hues). In a typical season, the northern hardwoods change color first, followed by the southern oak-hickories. And because much of the state contains a mix of both kinds of trees, explains Ryan Reed, the author of the state Department of Natural Resources’ weekly fall foliage reports, “You get that beautiful early peak with the northern hardwoods, and then you get the secondary show with the oak-hickory forests.”

Northern states like Vermont and Maine, Reed hastens to add, may be more associated with spectacular foliage, but because they’re dominated by northern hardwoods, their (admittedly phenomenal) period of peak color only lasts two or three weeks. “Then it’s over,” Reed says.

Not in Pennsylvania, though! Last year, Reed published his first foliage report on September 24th and didn’t stop until late October. We’ve got it really good is what we’re saying. After all, 60 percent of Pennsylvania consists of forest. “It all adds up to a really long fall foliage season and a really diverse fall foliage season,” says Reed.

What to Know Before Setting Off

In general, October is the prime month for fall foliage. You can expect a lot of people out and about. According to Michael Chapaloney, head of the state tourism office, hotel occupancy across Pennsylvania is as high in October as it is in August.

To help facilitate productive foliage excursions — because there’s nothing worse than a foliage trip where all the leaves are still green or no leaves are left at all — allow us to recommend some reading. Reed’s reports are the bible of Pennsylvania foliage, outlining week by week and county by county the current stages of coloration and the anticipated date of peak foliage. Not only that; Reed’s summaries include up-to-date photos taken by forest officials across the state, so you can really see for yourself what the leaves look like on the ground (or, rather, on the trees before they end up on the ground).

Now that that’s settled, it’s time to bust out your chunky sweaters, practice your camera skills, and start exploring these destinations, broken down by distance from Philly. If you plan to venture far afield, you’d best go soon: As of mid-October, Reed’s latest report noted that many of the northern counties were either at or near peak foliage. Closer to Philly, though, there’s no need to rush, as recent warm weather has put the brakes on the changing of the colors. For now.

Drive: 30 minutes from Center City; also accessible by bus and Regional Rail (Manayunk/Norristown Line)
Without a doubt, the optimal hiking spot in Philadelphia proper and the ideal location for autumnal photos. (Bonus info: Want a great shot above the trees? Head to the Walnut Lane bridge.) 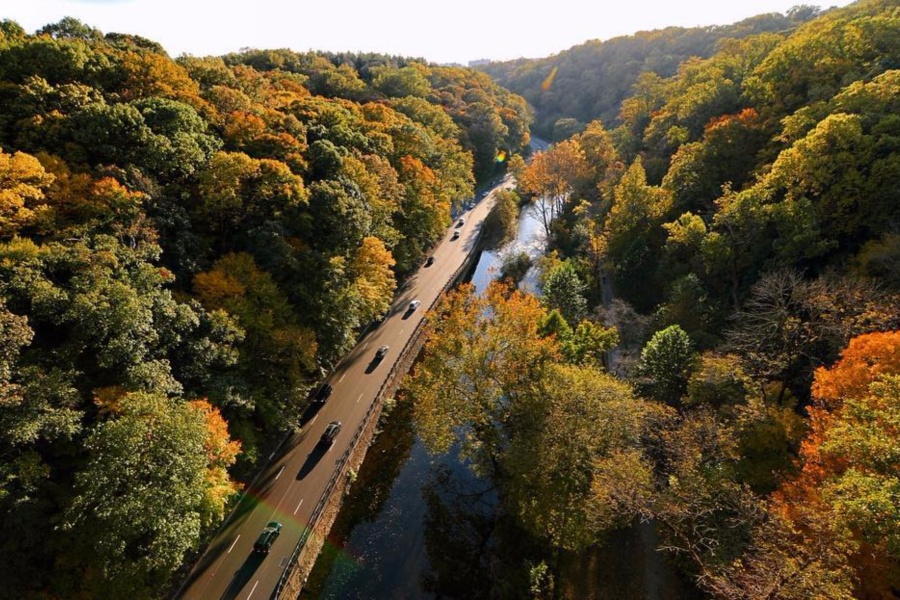 Drive: 30 minutes from Center City; also accessible by bus and Regional Rail (Airport Line)
Waves of warm amber tones surround expansive marsh views at John Heinz this time of year. Take a three-mile walk around the water, or opt for a shorter, more casual stroll. Bring binoculars if you want to spot the resident eagles. 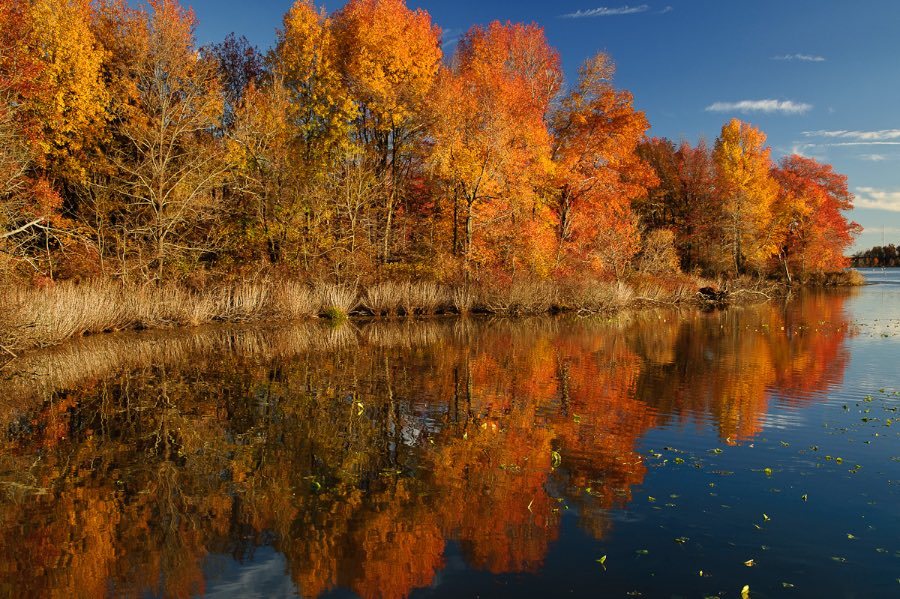 Drive: 30 minutes to an hour from Center City; also accessible by bus
If you’re looking for views of rolling meadows, open skies and fall-toned trees — as well as a bit of history — you can’t beat this destination. 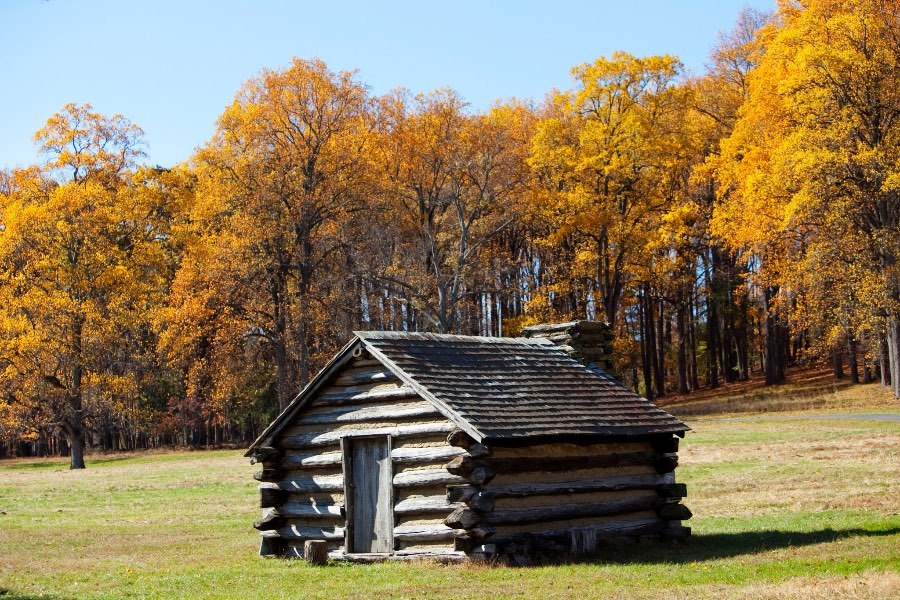 As you can see, Valley Forge is at its most photogenic in the fall. Photo by Jonathan Kolbe

Drive: 30 to 50 minutes from Center City; also accessible by bus
Ridley Creek is home to more than 2,600 acres of woodlands and meadows — and it’s located just 16 miles from Center City. Go for photos. Stay to hike, picnic, camp, fish, bird-watch, bike and more. 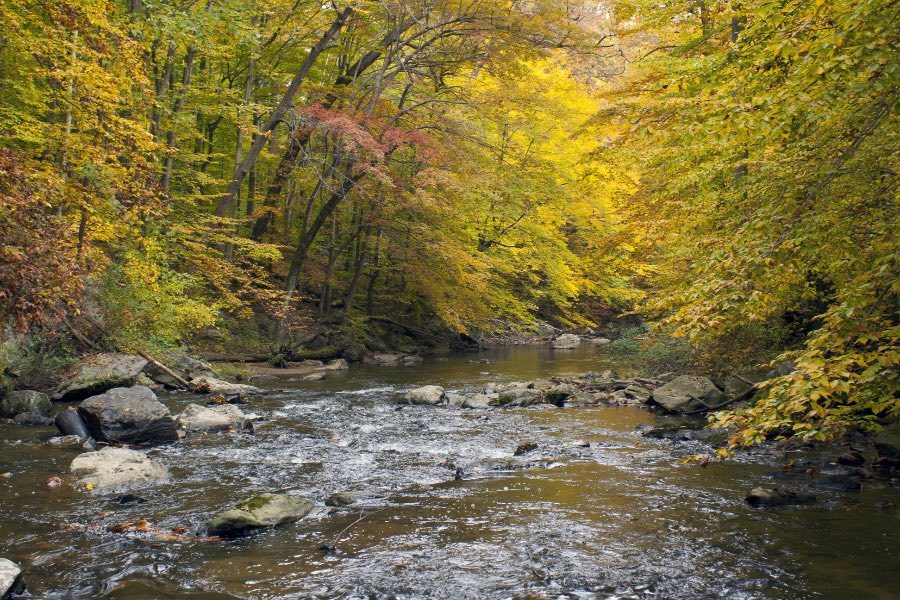 Drive: 30 to 50 minutes from Center City; also accessible by bus
Hiking trails, historic trees, a replica of David Thoreau’s Walden cabin — what more could you want? (Know before you go, though: Admission costs $15 for adults, $13 for seniors, and $9 for youth, military and students.) 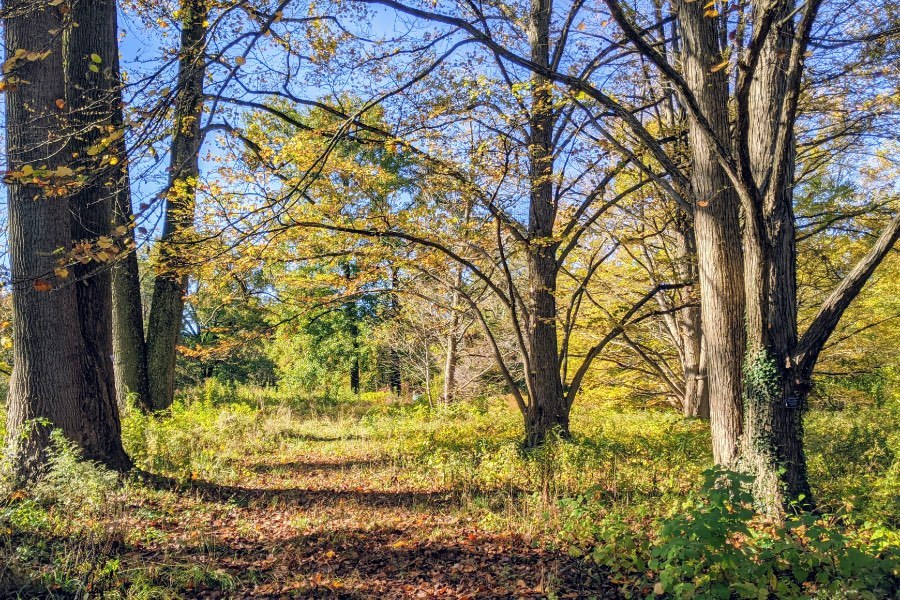 Drive: 45 minutes to an hour and 20 minutes
Like Pennsylvania, New Jersey has its own fall foliage report. Also like Pennsylvania, New Jersey has plenty of woodland, including this state forest in the Pine Barrens containing acres of sandy trails, cedars and swamplands. (The “Barrens” part of the name has nothing to do with the amount of eye-popping foliage, as you can see from the photo below.) 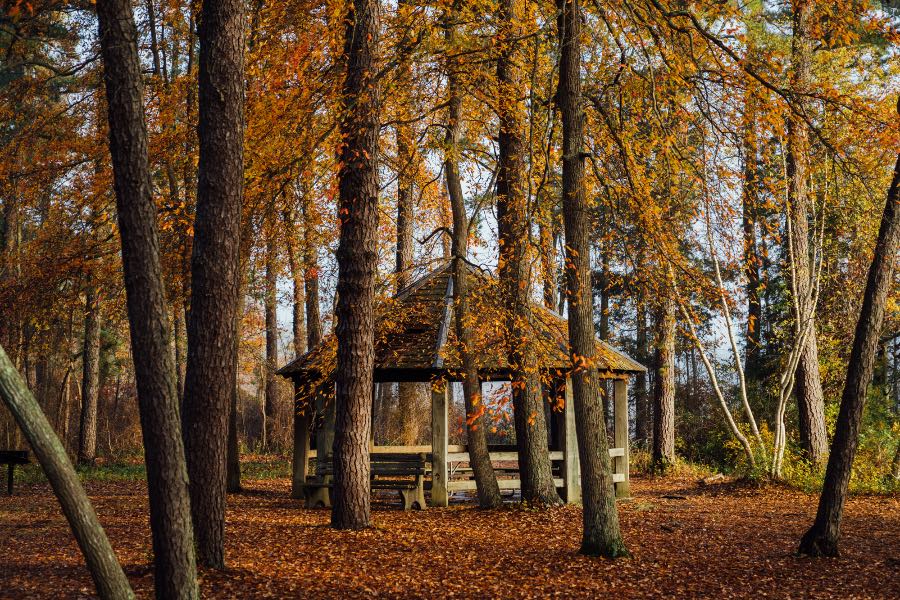 Drive: One hour and 10 minutes from Center City
Here’s a fun fact about French Creek: It’s the single largest section of contiguous forest between Washington, D.C., and New York City. Translation: Lots of fall foliage, or as they say in French, beaucoup de jolies feuilles. 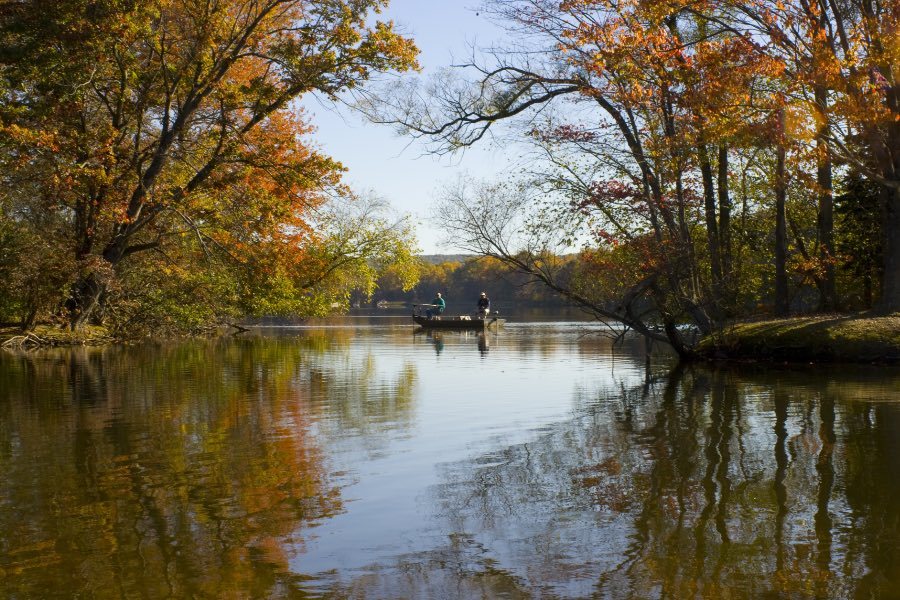 Drive: An hour and a half
As head of the state tourism board, Chapaloney knows a thing or two about taking trips around Pennsylvania. According to him, fall is the best time to travel in the state; thanks to the beautiful leaves everywhere you look, you hardly have to plan a thing. “You just get in the car and it’s Let’s see where we end up,” he says. “You’re not going to have a bad time.”

Of course, if you want a slightly more curated destination than “anywhere your car can take you,” Chapaloney can help out. Route 30, which winds its way around Lancaster, offers a mix of experiences, from leaves (the inedible kind) to fresh produce (the edible kind). “You’re going to see beautiful foliage and harvest, and then the roadside stands are going to be numerous,” he says. Once you’re in the area, take a detour to nearby Ephrata, where you can visit the 18th-century cloister seen below. 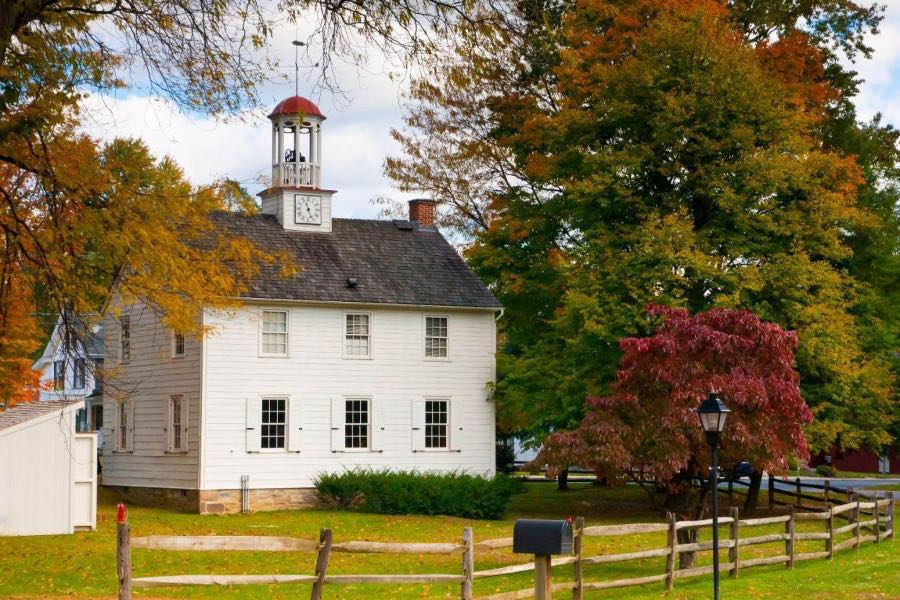 Drive: An hour and a half
Without a doubt, the most picturesque town in the Poconos is Jim Thorpe (formerly known as Mauch Chunk), which sits just an hour and a half outside Philly. It’s one of several towns in Pennsylvania that host dedicated fall foliage festivals, if “festival” is the right word to describe an event that takes place literally every single weekend through the month of October. If the hubbub of foliage fest in town isn’t quite your speed, other gorgeous destinations abound near the Poconos. Reed recommends the Pinchot State Forest or Lackawanna Lake, a bit further north. “You couldn’t ask for a better backdrop,” he says. 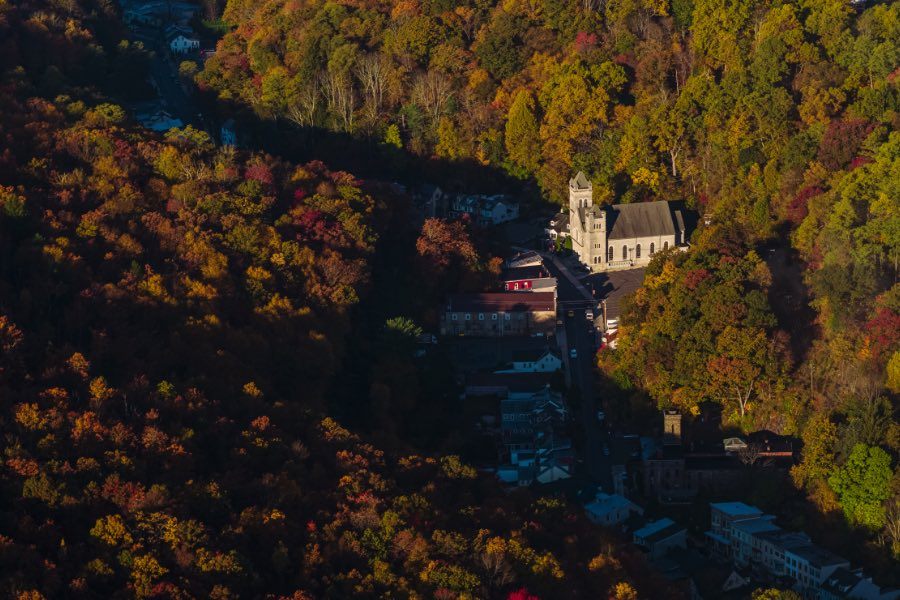 Jim Thorpe, as seen from above. We’re told the leaves look just as good at ground level. Photo Alex Potemkin/Getty/iStock

Drive: An hour and 40 minutes to two hours
Hawk Mountain is, as you might expect, a famed bird-watching destination. But consider … what would birds be without trees? Here, those trees form a fall foliage vista that would surely would have left Monet, had he seen it, wishing he’d spent his life near Hamburg — Hamburg, Pennsylvania, that is — instead of Giverny. There’s also a significant raptor migration right around this time of year, which is great, although not without its existential questions … don’t they know it’s called Hawk Mountain? 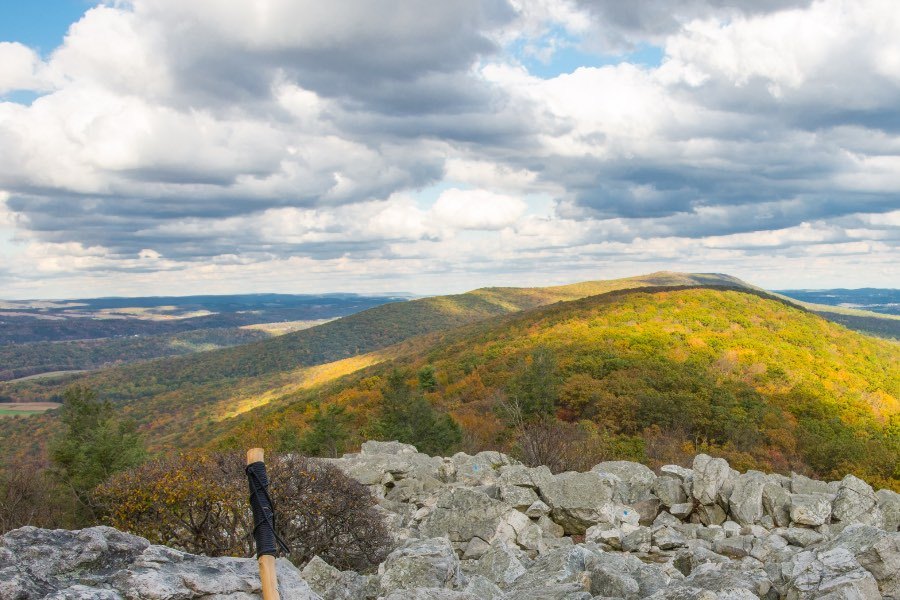 Drive: Two and a half hours
“One of things makes Pennsylvania so great is the number of experiences that overlap,” Chapaloney says. At Gettysburg, you get your history. Then you can go apple-picking or taste local ciders. And of course, the leaves are going to be phenomenal everywhere you look. Even the vistas from the Turnpike are glorious. 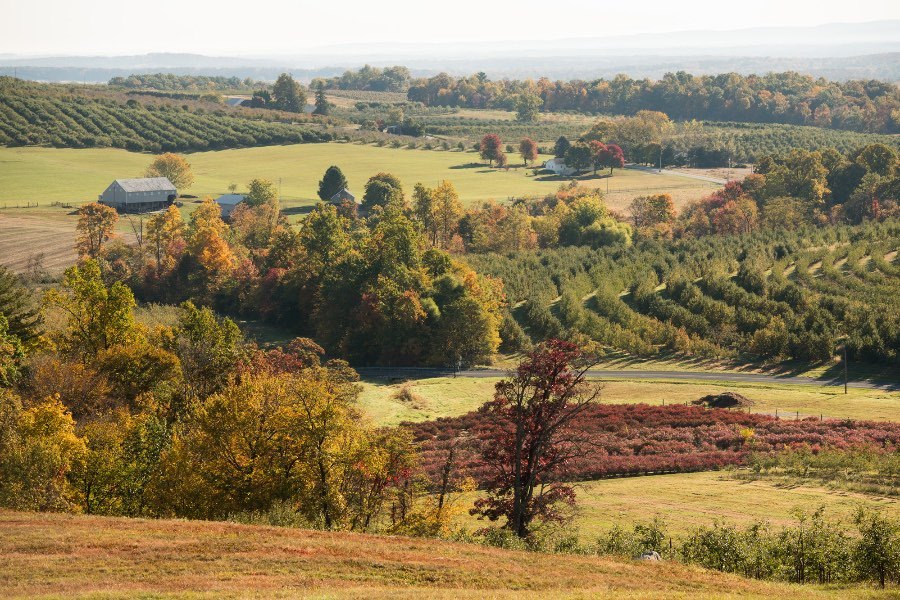 Like Valley Forge, Gettysburg offers an unbeatable combination of foliage and history. Photo by Jeremy Hess for Visit Gettysburg

Drive: Three hours and 20 minutes
Suggesting a fall trip to State College — yes, we know what that sounds like. But pick a weekend when the football team is playing an away game, Chapaloney says, and you just might stumble on some beautiful surroundings. He recommends the Inn at Bald Eagle State Park, “a beautiful lakeside inn that offers tremendous views” along with ample opportunities for hiking and biking. And the name of that state park is no misnomer. “I have seen bald eagles there,” Chapaloney says. 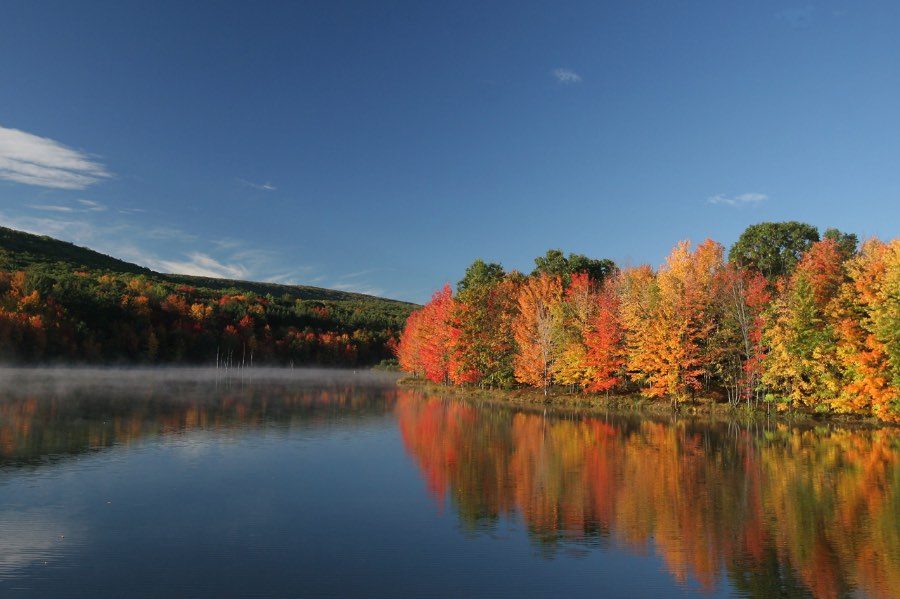 Drive: Three hours and 20 minutes
Another town that hosts an annual fall foliage festival, Bedford is conveniently located right off the Turnpike, and its Omni Bedford Springs Resort claims to have hosted 13 different U.S. presidents over its 200-year history. Nearby Buchanan State Forest is stunning, and if you want to experience an unusual, upscale glamping experience, River Mountain, host to zero U.S. presidents but still plenty appealing, is just 15 miles from downtown. 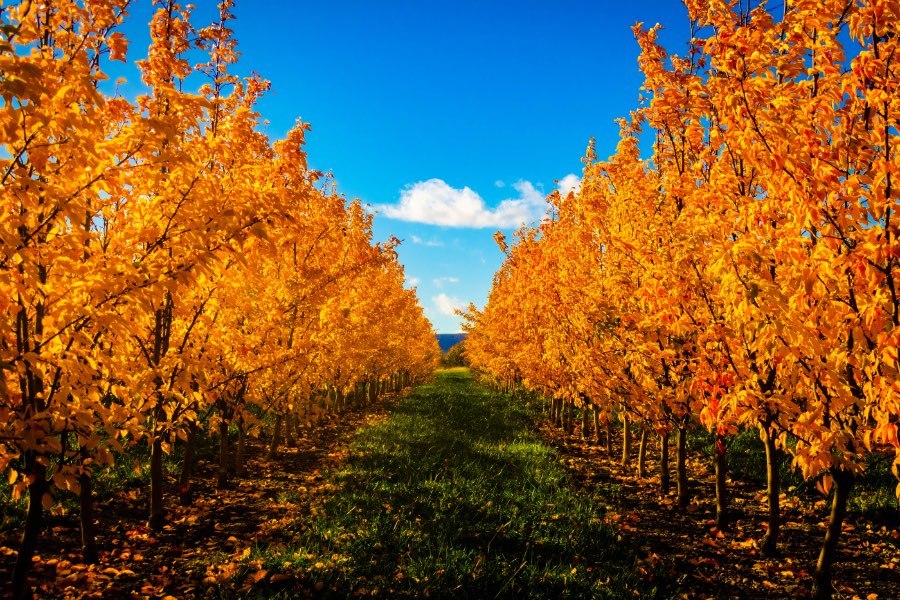 An orchard in Bedford, Pennsylvania. Photo by Denelle Diehl, courtesy of Visit Bedford

Drive: Three and a half hours
Tioga is one of the top counties for fall foliage, in large part, Reed says, thanks to its high number of northern hardwoods, those maples and other species that produce lush red colors in the fall. “There’s an abundance of public land there, and accessibility is fantastic,” Reed says. He recommends the Pine Creek Trail, which runs through the Pine Creek Gorge — known to some as the Grand Canyon of Pennsylvania (seriously!) — and will leave no leaf connoisseur unsatisfied. 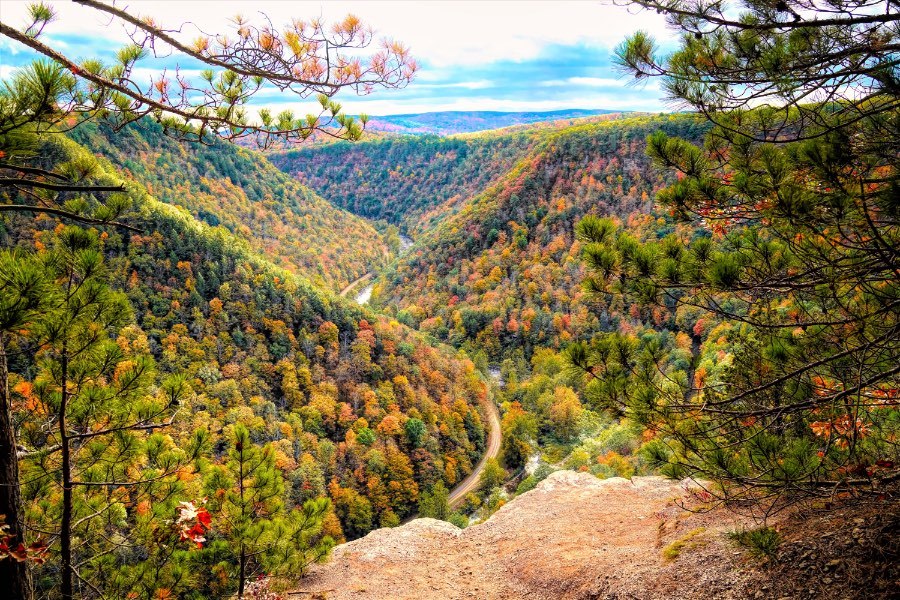 Drive: Five hours and 45 minutes
Granted, this part of McKean County, situated right next door to the Allegheny National Forest, is practically in Canada. But if you want to understand why we included it on this list, all you have to do is look at the photo below. Oh, and did we mention the Kinzua Bridge State Park is home to a “skywalk,” essentially a 600-foot-tall runway, built on repurposed railroad tracks, that offers panoramic views, as well as that jittery feeling of being suspended in midair? Yeah, they’ve got that, too. 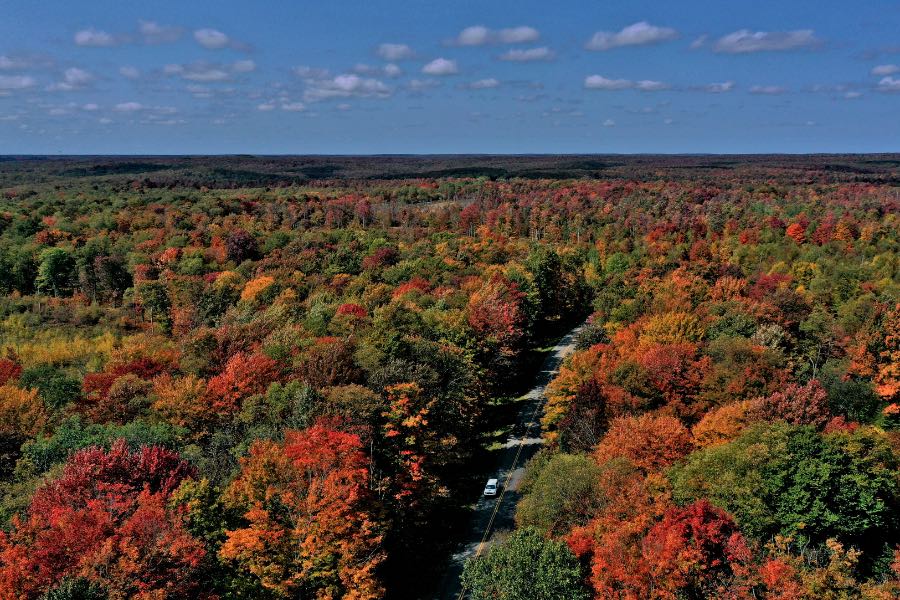 The Kinzua Bridge Scenic Byway, as seen from above. Photo courtesy of Allegheny National Forest

This post was updated to correct the location of the Kinzua Gorge.