Say Goodbye to Eastern State Penitentiary’s Terror Behind the Walls

The wildly popular haunted house has been replaced by a beer garden, a drastically smaller "haunted" section, and some “not scary” attractions. 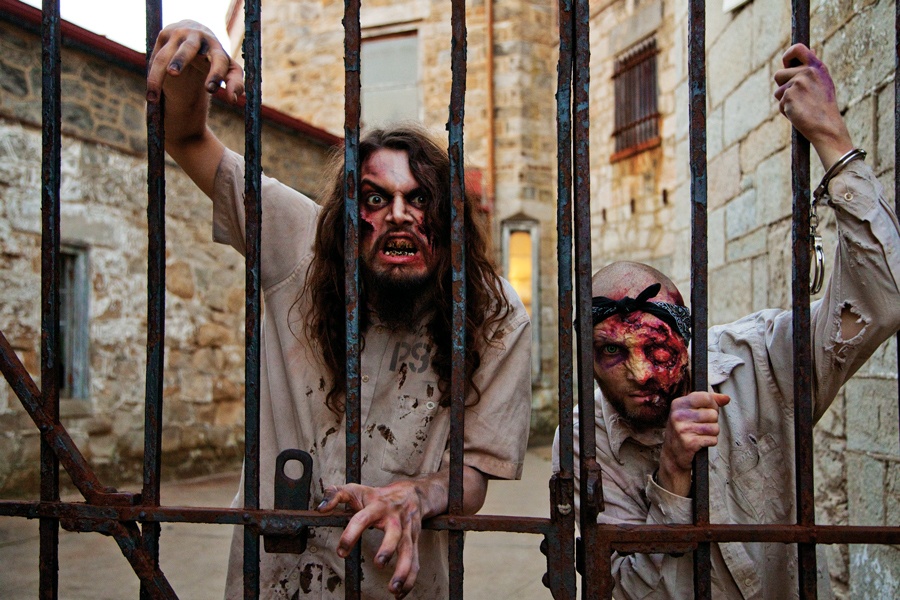 Terror Behind the Walls at Eastern State Penitentiary. M. Edlow for Visit Philadelphia

Most people who live in the Greater Philadelphia area probably know of Eastern State Penitentiary’s existence thanks to the 19th-century prison’s highly publicized and highly successful Terror Behind the Walls annual haunted house. So frightening that workers kept a running list of how many visitors literally peed themselves inside the horrific display of monsters and mayhem, it attracted scare-seekers from all over the region for many years.

When Terror Behind the Walls didn’t return last season, absolutely no one was surprised. Like Broadway and sweaty dance clubs, haunted houses weren’t really a thing thanks to COVID. But it turns out the penitentiary has decided it’s done with the organization’s biggest moneymaker once and for all.

“Terror Behind the Walls was built to be a haunted house that was as scary as possible,” says Brett Bertolino, Eastern State’s director of operations. “But many, many people told us it was too scary.”

Bertolino says that trends in attractions change; witness escape rooms and zombie mud runs. Ten years ago, plenty of people wanted to be scared so much that they involuntarily emptied their bladders, or at least skipped a few heartbeats. But these days, he notes, they want to grab a drink with their friends, maybe hear some live music or see a performance. And some of those same people who screamed their heads off 10 years ago now live in the neighborhood with small children and new priorities. Terror Behind the Walls misses the mark for that set.

So Eastern State has replaced Terror Behind the Walls with Halloween Nights, a combination of a beer garden, live performances, some “non-scary” exhibits and attractions, as Bertolino describes them, and a much smaller “haunted” component than before. (Opening date for Halloween Nights: Friday, September 24th.) Those in search of what Terror Behind the Walls offered will have to look to other options for terror-induced palpitations.

Will the gentle-sounding Halloween Nights be as much of a revenue-generator as Terror Behind the Walls? Likely not. But to make up the difference and, well, evolve as an organization, the penitentiary has bolstered its other events, including more than 100 nights of new programming this year, concluding in November and December with winter-holiday-themed festivals. These may not have the sex appeal of “one of the best haunted houses in America,” but they’ve got broader appeal, for sure.

Bertolino says if not for COVID, everything would probably be the same as it was in 2019. But he sees the changes as major improvements and not as a corner he was forced into by a virus. “Our programming initiatives have never been more robust, and it’s because we were forced to rethink what we could do,” he says. “It’s exciting.”

Exciting, yes. Blood-curdling, no. But maybe that’s all right.

Published as “So Much for Terror” in the October 2021 issue of Philadelphia magazine.