Quirky, irascible Henry Chapman Mercer sought to keep alive the handicrafts of the past. A trio of Bucks County buildings preserve his art and his work — and make a perfect day trip. 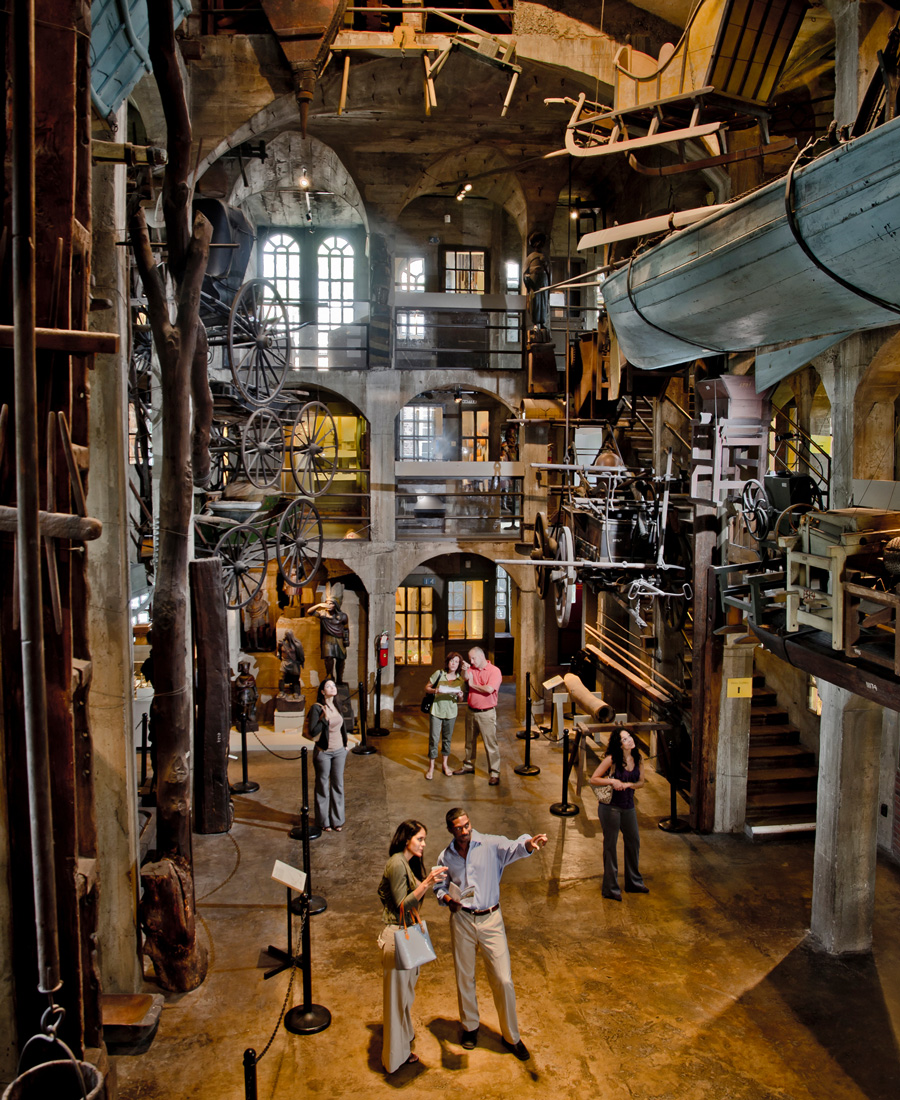 Henry Mercer is the mind behind the hall of wonders known as the Mercer Museum. Photograph by B. Krist for GPTMC

It’s a rare Bucks County schoolkid who hasn’t gawked at the interior of the Mercer Museum in amazement. Who on earth assembled all this stuff? Plowshares, spinning wheels, stagecoaches, baskets, hats, wallpaper, pottery … it’s not so much a museum as a hall of wonders. There’s even a real live (dead?) gallows, for hangings, up on the top floor. The building houses Henry Chapman Mercer’s astounding collection of some 40,000 items used in early American handcrafts and trades. Mercer, a graduate of Harvard and a never-practicing lawyer, became a self-taught archeologist and joined Penn Museum as curator of American and prehistoric archeology for a whole three years before his, um, “curmudgeonly personality” got him canned.

He also dabbled in architecture, erecting three remarkable buildings in Bucks County — the museum; his home, Fonthill; and the Tileworks of Bucks County, formerly known as the Moravian Pottery & Tile Works — that still stand today and offer insights into Mercer’s approach to his work, which he described as “archeology turned upside down.” He was fascinated by the everyday tools and implements that had been used to build America but were, at the turn of the 20th century, quickly being discarded as industrialization made them obsolete. (He picked up many of the items on display at the museum for mere pennies at country thrift sales.)

Here are brief descriptions of the three buildings, along with a fourth day-trip destination: Aldie Mansion, which Henry’s brother William built on the site of a house constructed by their parents. The first three are close enough to one another to make up what’s called the “Mercer Mile.” 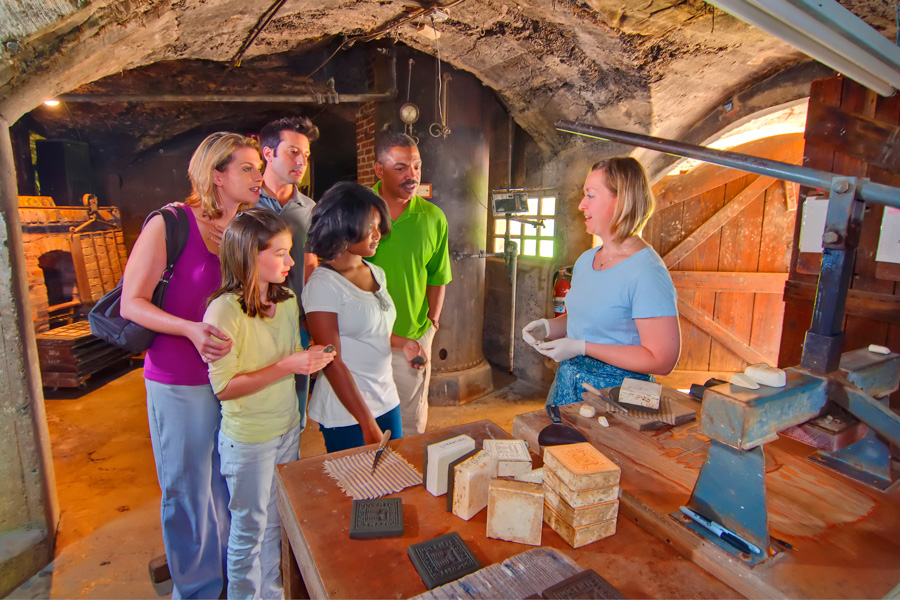 Moravian Pottery & Tile Works. Photograph by B. Krist for GPTMC

The Tileworks of Bucks County

Henry, known as “Harry,” was born in 1856 in Bucks County, the grandson of a county judge and the son of well-to-do, well-connected parents. After graduating from Harvard in 1879, he became one of the founders of the Bucks County Historical Society. After archeological adventures in the Yucatan Peninsula and the Ohio, Delaware and Tennessee River valleys and his brief stint at Penn, Harry began collecting artifacts from pre-industrial America. This work led him to become interested in tile-making, and he learned the craft from some of the last practitioners of redware pottery-making, focusing on tiles because they were easier than thrown pots or bowls.

He would become world-famous for his decorative Arts & Crafts tiles and in 1898 built the Moravian Pottery & Tile Works to produce them. Mercer used the tiles, handmade in unusual shapes, glazed in earthy colors, and decorated with scenes from everyday life, to adorn his home; they also make up the mosaic floor of the state capitol in Harrisburg (built in 1906), where they depict scenes from the Commonwealth’s history. Mercer described one of these mosaics as “the equivalent of a large, Oriental rug” with a “luminous interweaving of tinted shadows.” Today, the Tileworks still teaches tile-making and produces and sells examples of the craft. 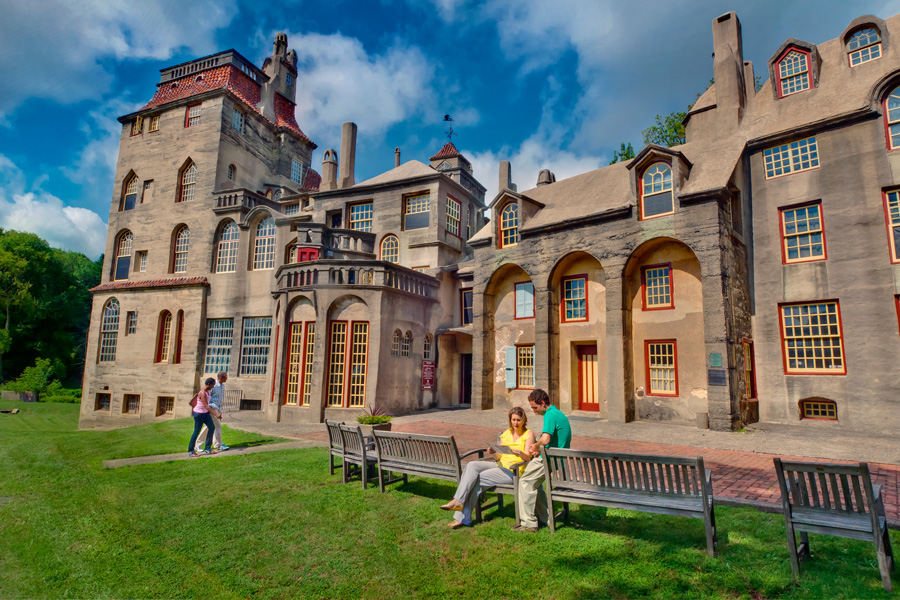 Fonthill Castle. Photograph by B. Krist for GPTMC

In 1910, fire trucks raced to the 44-room mansion that Mercer, a lifelong bachelor, was in the midst of constructing for himself a stone’s throw from the Tile Works after a report that its roof was ablaze. There was a fire on the roof: a bonfire, built by Harry to celebrate his birthday and to demonstrate the poured-concrete structure’s “fireproof qualities.”

The building, intended to look like an ancient fortress, nonetheless included the latest amenities — plumbing, electricity, an intercom, an elevator, central heating — making it, in Harry’s words, “a Castle for the New World.” He designed the place room by room, crafted each room in miniature in clay, then piled them atop and around one another until he had the structure he wanted. This was then replicated at full size with wooden forms, or molds, that could be filled with a poured mixture of Portland cement, yellow sand and crushed stone.

The end result was studded with tiles, including a “credit label” listing “the names of the men who planned this house, directed its plan, executed its construction, adorned its walls, embellished its pavements, built it with their labor, and the horse who uplifted it with its strength.” Whether you find the place glorious or way over the top depends on your taste, but either way, it’s fascinating. Should you want to get married in a castle but can’t afford to fly all your friends to Europe, this is an excellent option.

Mercer in 1916 constructed a vast six-story poured-concrete building to house his growing collection of tools, etc., in the fashion he saw as logical. A stagecoach, a whaling vessel and a Conestoga wagon, along with other large items, hang in the central atrium, surrounded by a warren of staircases, landings, and smaller rooms that contain artifacts divided by Mercer’s own system into classifications like Clock and Watchmaking, Needlework and Laundry, Basket and Broom Making and Tobacco Culture.

Among the items on display is the Lenape Stone, a four-inch piece of slate turned up by a farmer near Lahaska in 1872 and later declared by Mercer to be a prehistoric pendant depicting Native Americans hunting woolly mammoths (which, of course, had died out by the time humans arrived on Earth’s scene. That didn’t stop Mercer, who wrote a book about how the find was proof of a vanished race. Most experts today agree the stone is a forgery, but hey, who knows?).

Upon completing the museum, Mercer donated it to the Historical Society. By the way, right across the street, on the site of what used to be the county prison, is the headquarters of the Bucks County Free Library.

Harry’s brother, William, with his wife, Martha Dana Mercer, built this Tudor tribute in 1927 on the site where the brothers’ parents’ home once stood — which apparently occasioned a falling-out between the two men. William was a sculptor of some renown, and the mansion and grounds are replete with examples of his work in the form of gargoyles and architectural details. (There are tiles, too.) Funds for the project were provided by their mother’s sister, Lela, who married into the wealthy Lawrence family of Boston. (Harry and William’s sister, Lela, was her namesake.) Lela Lawrence, who was childless, often took her nephews and niece on tours of Europe, on one of which Lela the younger fell head over heels for an Austrian baron she later married in the Aldie gardens. You can still get married there today!

William and Martha enjoyed entertaining the likes of Groucho Marx and the von Trappe family at their lovely home, which today is the headquarters of the Heritage Conservancy, “a community-based organization dedicated to the preservation and protection of significant open spaces, natural resources, and our historic heritage.”