Questlove Talks the Troc, Cheesesteaks, and His Greatest Fear

In honor of the 12th annual Roots Picnic, happening Saturday at the Mann, we pulled our fun 2011 interview with Questlove out of the archives. 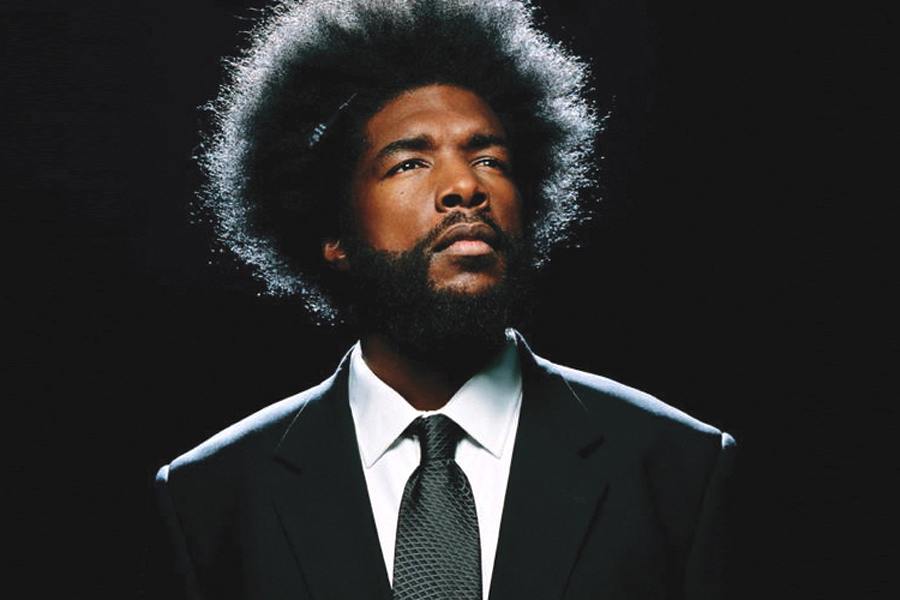 It’s good to be Questlove. He’s got his vegan cheesesteaks at Citizens Bank Park. He and the Roots are now in their tenth year playing for Jimmy Fallon on NBC. And the Roots Picnic has moved from Festival Pier to the Mann Center — a million times better a location.

Way back in 2011, we sat down with Questlove, and it remains one of our favorite interviews with him to date. Enjoy!

I am … actually attempting to be witty at 2:36 a.m. in Philly, despite the fact I have to cram seven Itzhak Perlman songs before 2 p.m. tomorrow in New York.

I was born … in Children’s Hospital.

I’ve lived in Philadelphia … for all of my life. Fifty-second Street runs through these veins.

The thing I like most about myself is … I just recently found out via therapy that it’s okay to say I actually like myself.

The thing I would change about myself is … my resistance to saying “no.”

My greatest extravagance … Well, what y’all call “extravagance,” I just call everyday stuff. But I love vicariously living through other people’s excitement and happiness when I share it.

The place I’d most like to live someday is … Well. You really have to understand that the Roots have traveled like no other act in recent memory. We don’t “visit” places. You live there. And it’s been so frequent that we pretty much know ’em by heart. That said, I will give my five favorite places on Earth, and why:

Performing or producing? Grass is always greener on the other side. Pre-Fallon, I dreaded leaving the States to go perform. Now that I have all the states one can handle with a steady gig, I would do anything to go to Austria or even Italy again. (Those that follow my Web history know those two places were my least favorite when globe-trotting.)

My fictional hero is … Charlie Brown. He took all types of abuse and never complained. He wasn’t even the star of his own Halloween special.

My real-life hero is … This question is worse that doing liner notes and “thank yous” for Roots albums, ’cause everyone is searching for their name. I look up to and learn from everyone. (Mama didn’t raise no fool, stop laughin’.)

Drumming … is an overdone art. Cats overdo it. I respect cats who draw the least amount of attention to themselves. Keep it simple, stupid. You are the metronome cop. Not the center of attention.

The best thing I own is … Let’s put it this way: I own at least one priceless personal item from most of my music idols. If I were to list them, the estates of said artists would hunt me down.

The first time I met Prince … I immediately noticed the Macy’s Day Parade size of his head to his body.

My favorite person to follow on Twitter is … I’m always gonna have a crush on Kerry Washington. And she, me. She just don’t know it yet.

Playing music on TV every night … can be revolutionary. I want this show to be as powerful as “Yo! MTV Raps,” “Arsenio,” “Soul Train” and the ’80s period of MTV.

One thing Philly doesn’t have that it really needs is … anything remotely brotherly.

My greatest fear is … not working. Not from a poverty angle, but simply because the silence ’round here would be deafening.

The best place to vacation is … My only vacation I ever took: Summer of ’09, New York to L.A., Amtrak sleeper car. Alone. Great view. Amazing!

If I could do anything else for an occupation, I’d be … a “Soul Train” archivist.

My secret hobby is … counting paces. Always making secret bets with myself, like “I can get to this elevator in 50 steps” or “I can count to 1,000 before this train stops at Penn Station.” It’s a longtime obsession.

The best book I ever read is … Outliers, by Malcolm Gladwell. The 10,000-hour rule is everything to me.

The thing that people generally don’t know about me is … I’m human. Not in that “waah waah, cry me a river” way, but in that you don’t have to yell “Questlove!!!!!” while standing four inches away from me. You get better results talking to me like you would your cousin or coworker. All the screaming stuff freaks me out.

The best thing on TV is … I’m really glad you didn’t ask what my guilty pleasure show is. I won’t answer that. I’m a comedy sucker: “30 Rock.” “Community.” “Modern Family.” “Perfect Couples.” “The Office.” “It’s Always Sunny in Philadelphia.” “The League.” “How I Met Your Mother.” “The Soup.”

I think Philadelphians are … misunderstood.

I get inspired by … listening to the session reels of [Michael Jackson’s] Off the Wall (a 40th birthday gift from someone), ’specially take two of “She’s Out of My Life,” in which M.J. breaks down harder than the version we know, which was take six. The whole album is a revelation in genius. It’s all the college you need as a producer.

My pet … peeve is when I’m interrupted while DJ’ing. I want the same courtesy you’d give me if I were drumming.

The person I most envy is … Hmmm. I can’t answer that. For all of my “under-dog-ness”, my life is pretty damn charmed.

I spend most of my time … doing questionnaires like this.

The skill I most wish I had is … Kinda gotta admit. Most hip-hop experts acknowledge my partner Black Thought as the standard for awesome emceeing. But his real gift is that he’s as amazing a chef as he is a wordsmith. (Like, of the Stephen Starr variety.)

My greatest achievement … The downfall of any artist is to pull a “Lot’s wife” and start reflecting and basking in their career achievements. That is the true secret to my success — I never bask in the glory. I do a job, and the next day I’m onto the next challenge with the energy of a freshman with something to prove.

I’m just so sick of … Fox News. I dream sometimes that Murdoch gets brought up on charges.

If I could switch places with one person for a day, it’d be … Well, as of this writing (and I know if this periodical is read 10 years from now it won’t make sense), Charlie Sheen is going HAM on TV right now. Just for 20 minutes I wanna know what his life is like. Okay, okay … 25 minutes.

My favorite spot in Philly is … I love driving up and down Broad Street. Sometimes if I’m bored around 2 a.m. — ’specially if I’m working on a record and I wanna give it a test drive in the car — I’ll hop in the car and do the complete stretch of Broad Street.

The thing I’m most excited about right now is … our Roots picnic and our newly bestowed Philadelphia Fourth of July celebration.

Being famous … Famous is when your lifestyle overtakes your talent. No one is rummaging through my trash looking for which Kardashian I’m dating. I’m just a well-respected musician.

I found the love of my life … Not.

My career … is a charmed textbook tortoise-and-“hair” example. This is sacrifice and perseverance of the highest order.

The best venue to play … In Philadelphia? Man, that’s so hard to answer. The Troc gave us our start. My offices are right above the Electric Factory, so it’s nothing to come downstairs when I please to see shows and whatnot. Kimmel, of course, was magic. But my dream is the Wells Fargo.

My parents … were the best record collectors ever, but two opposite extremes. He was into the yacht rock of the ’60s: easy-listening stuff like Nat King Cole. Beatles. Pet Sounds. And easy-listening ’70s stuff. He and my sister constantly kept the dial on Magic 103 WMGK back in the day. My mom shows my adventurous side. She copped albums like beat-makers today get albums in used-record stores: basing it on how crazy a cover looks. (If Mati Klarwein did the artwork, it was good as sold to her. I mean it could’ve been the Bay City Rollers doing the dreidel song for an entire album, but if the artwork looked like Santana or ’70s Miles? That was an instant sell.

My Grammy … was broken in two pieces and always a fixture on my toilet, simply because I was self-defeating and thought it would never happen in this lifetime again. Now that I have an additional three, I’ve invested in some Krazy Glue and a relocation to the living room.