PREVIEW: This Is The Week That Is Laughs at Our Crazy World

The 1812 Productions’ team on how and why they make funny in the Age of Trump. 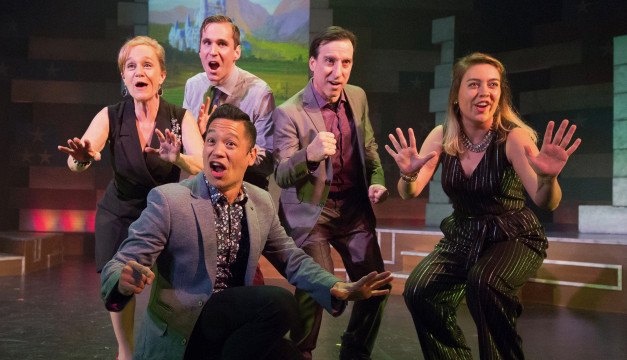 Jennifer Childs, Sean Close, Dave Jadico, Tanaquil Márquez, and Justin Jane in This Is The Week That Is at 1812 Productions. (Photo by Mark Garvin)

If the state of the union has you not knowing whether to giggle insanely or sob uncontrollably, you’re not alone. Imagine the challenges faced by a team of comic performers, writers and directors who look to lighten hearts and bring joy to audiences during the so-called festive season.

No one in Philly know this like the good folks at 1812 Productions, whose yearly holiday shows have been a veritable USO, gaining admirers far and wide. Their current format, This Is The Week That Is, turns 13 in 2018. Each year, this topical revue focuses on politics and culture of the moment. It’s revised to address current issues right up to curtain time.

So I put it to four members of the team—how and why do we make funny in (gulp) the Age of Trump?

Tanaquil Márquez (performer and writer—this year is her Week debut)
Comedy is a positive weapon. When you have a president who is so powerful and controversial, the country needs to let off steam. Comedy is that. It’s a great way to critique all the chaos, and at the same time entertain people. It’s a distraction where a person with less power than the president can challenge authority and even the playing field.

Justin Jain (performer and writer—three-time Week veteran)
Despite the angst, confusion, and frustration of America’s political climate, it is an incredible (and maybe lucky) time to be an American. This summer, I spent 45 days abroad collaborating with artists from Greece, France, Scotland, Catalan, Spain, Turkey, Colombia, Taiwan, and Australia, to name a few. And repeatedly, I was reminded how much we take our basic freedoms for granted. Theatre artists around the world are getting arrested, putting their family and friends in danger, for the kind of work we are creating with our show. The fact that we have the privilege to get on a stage and make jokes and statements about our government not only provides us a release from the tension of various issues, but is also a reminder that we are lucky enough to have the freedom to do so.

Sean Close (performer and writer—four-time Week veteran)
It feels more important than ever to seek out joy, connection and community right now. And I think comedy is a means to those ends. This moment in our country has many of us hiding away and withdrawing out of fear—a totally understandable response. I just think comedy offers a pivot from that default response—a glimpse of hope in a seemingly hopeless time, a respite for us, and a way to recognize and relax into the humanity of those around us.

Jennifer Childs (director, performer and writer—13-time Week veteran)
Answering the “why” is easier than the how.  I feel like Trump stokes anger and promotes hatred, and it’s important to counter that by promoting joy. At a time when we feel so divided, being in a room with a couple hundred people who are all laughing together, regardless of political affiliation…that’s what it’s about.

“How” to be funny is trickier.  Parody and satire are about pushing the norm to extremes. How can you parody someone who is already a parody of themselves?

So, we made a conscious decision not to have Trump as a character in the show. He takes up so much space in our world already and we didn’t want to give him another platform. So although the show certainly takes aim at politics, skewering both the right and the left, it is less about Trump himself and more about what it feels like to be alive in the Trump era.

I’m not going to lie—this year has been filled with events that make it hard to find the funny.  Every once in a while, during a musical number, even while dressed in a ridiculous costume, I will find myself suddenly on the verge of tears as the seriousness underneath the satire rises up and meets me.

But that is also the joy of this show—we start from a place of “what is true right now?” And the truth is we are exhausted and angry and sad. Owning that allows us to make comedy that is honest and meets the audience where they are.  We’re not up on stage saying, we’re going to make you forget your worries.”  We’re saying, “We’re just as confused as you are, but we’re in it together.”

This Is The Week That Is will play through January 5. For more information, visit the 1812 Productions website.