REVIEW: An Abundance of Riches in Arden Theatre’s Once

In this enchanting show, the second act is the charm. 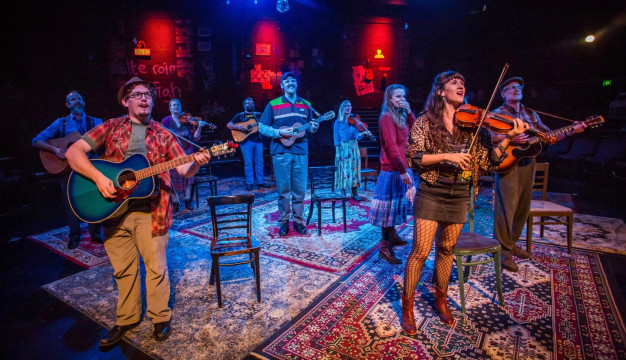 “You only live once… but if you do it right, once is enough.”

Thus spake Mae West, who was of course really talking about sex. The musical Once, a bittersweet boy-meets-girl story with a winningly folksy indie score by Glen Hansard and Markéta Irglová, emphasizes instead the more emotional side of romance.

But surely West would approve. Once is done right at the Arden. More than right: it’s marvelous. And that isn’t merely enough—it’s an abundance of riches.

Frankly, at first I wasn’t sure. Oh, don’t get me wrong. The evening was off to a terrific start with a musical jam session featuring a terrific ensemble of beloved Arden veterans (Scott Greer, Greg Wood, Charlie DelMarcelle, Justin Yoder, and the adorable Alex Bechtel, who shines particularly bright here) and some welcome newcomers (Kendal Hartse, Mary Fishburne, and delightful fiddler/actor/singer Emily Mikesell). These gifted artist bring both musical and theatrical skills to the table.

But as Once began in earnest, its plot (Irish guy meets Czech woman in Dublin; sparks fly, but both have baggage) seemed gossamer thin, and the book simultaneously too long and not deep enough. The score was pleasing, not memorable.

By the end of first act, I was ready to conclude that the show depended utterly on the charm of its cast. Fortunately, here that’s considerable, including most centrally charismatic leading actor Ken Allen Neely playing the generically-named “Guy,” and the revelatory Katherine Fried, radiant and quirky as the “Girl.”

Still, 90 minutes seemed like the limit of this idea. We were there already, yet there was still another act to go. And musicals, as you’ve probably heard, are notorious for second act trouble.

But Once has the opposite of second act trouble. Instead, everything comes together gloriously. The storytelling goes up several notches (I understood why celebrated playwright Enda Walsh’s book won a Tony). The characters achieve a sense of real dimensionality. Musically, things also feel richer, especially in a lump-in-your-throat ensemble moment that in itself is worth the price of admission.

By the way, the Arden’s flexible Haas Stage space here is used in the round, as it was for last year’s Fun Home, and I’m coming to think that not only is this the best configuration for the space, but it also brings out the best in director Terry Nolen, whose work here is fluid, elegant, thrillingly immersive, and benefits immeasurably from David P. Gordon’s deliciously comfortable set and Thom Weaver’s moody lighting.

Don’t just take my word for it. Discover Once for yourselves. The show has already been extended likely will be a sellout. As it should be: Once is more than enough to send an audience home happy.

Once plays through October 28. For more information, visit the Arden Theatre website.