But whether this earnest, winning piece is a successful play is an open question. 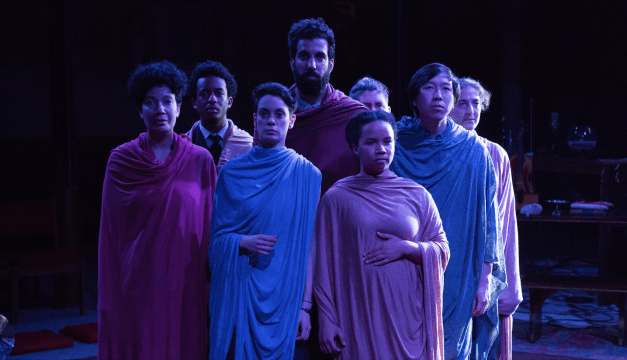 In the beginning, the people shall be greeted by a delightful pair of vaudeville-comedy rabbis, calling the audience to order with a shofar.

Well, you know what they say: shofar, show good. (Badum-pum.)

Lest you think I’m inappropriately drawing humor from a serious, indeed sacred, theme, let me assure you that L M Feldman’s A People—which offers kaleidoscopic perspectives on issues confronting the Jewish people today and throughout an epochal struggle—is refreshingly un-preachy, often light-hearted, and always warmly welcoming.

A notably diverse cast of eight appealing actors (I particularly liked Leah Walton and Aaron Bell, but you’ll have your own favorites) assume multiples roles, changing costumes and personas in view of the audience, as they introduce fragmentary but often compelling stories. Some sequences go on longer than others; some feel like solo pieces, while others are done in counterpoint, often across of historical periods and cultures. What emerges most strongly here, though, is the challenge of feeling like an outsider—in one particularly poignant piece, a lesbian (well-delivered by Bianca Sanchez) struggles to define both her sexuality and her Judaism.

Press materials for A People aptly evoke the metaphor of a mosaic. Individual pieces don’t always seem complete in and of themselves, and the placement of two or three together can be initially mystifying. But the totality of the picture that comes into focus has a sense of cohesiveness, and is often charming and touching.

Rebecca Wright’s fluid production emphasizes the loose construction of Feldman’s writing, even providing a feeling of improvisation to this scripted piece. The group sometimes reminded me of Pippin’s troupe of strolling players.

I found the earnestness and positivity of A People very winning, though the piece feels overlong. Whether it’s a successful play is, I think, a personal matter. Some will give themselves over completely to its episodic style. Others will want more grounding and structure—not to mention a clearer sense of purpose. The emerging message of A People is unclear—on the one hand, the diverse group of performers and the clever idea of staging this particular piece in an Episcopal church imply that the Jewish experience should be understood as universal and inclusive. But segment-by-segment, what we see feels very specific.

Then again, I always favor theater that attempts to raise questions rather than provide easy answers. A  People brings Philadelphia’s noble Orbiter 3 project to an end. Along the way, it introduced us to many artists—writers, directors, actors, designers—with highly individual voices and talents… and indeed, left us with innumerable questions. Our city and its cultural life are richer for their contributions.

A People runs through June 2. For more information, visit the Orbiter 3 website.