REVIEW: Stones in his Pockets Skims Elegantly Over the Surface 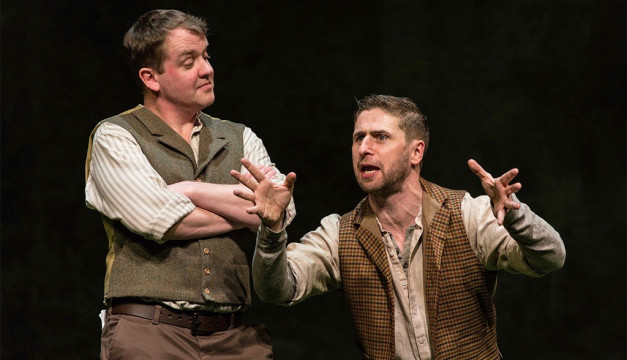 Garrett Lombard and Aaron Monaghan in Stones in his Pockets at McCarter Theatre Center. (Photo by T. Charles Erickson)

Marie Jones’ Stones in His Pockets was a genuine international hit when it was first produced two decades ago in Ireland, London, and on Broadway. Since then, it’s had successful regional productions as well, but this revival at McCarter—in the capable hands of director Lindsay Posner, and elegantly designed by Beowulf Boritt—is more lavish and polished than most.

Stones takes place on film location shoot, where a big-budget American movie set in an Irish village offers a welcome infusion of work to a town and a population that can use the money. Jones’ script is a two-hander, with a pair of actors (Garrett Lombard and Aaron Monaghan) taking on dozens of different characters. It’s a familiar strategy—Mystery of Irma Vep and Greater Tuna are two shows that come to mind—and similarly here, a lot of the success relies on the range and energy of the performers.

But Jones’ script is more ambitious. First, the quick changes in Stones happen with astonishing frequency, sometimes literally in mid-sentence. Then too, the plot matters more—in addition to the comedy you expect in a piece like this, there is a serious, even tragic, turn to the plot.

As seen here, Stones is enjoyable but doesn’t fully realize its ambitions. Lombard and Monaghan are good actors but lack the astonishing turn-on-a-dime ability to change characters that’s called for. Jones’ script has good moments, but the quick-change format really doesn’t suit the deeper levels she wants to explore.

The audience clearly had a good time. For me, I wanted more—more laughs, more tears, more sheer virtuosity.

Stones in his Pockets plays through Feb. 11 . For more information, visit the McCarter Theatre Center website.