A Q&A with Chick Tract expert Kurt Kuersteiner, who brings his collection to PhilaMOCA on Saturday. 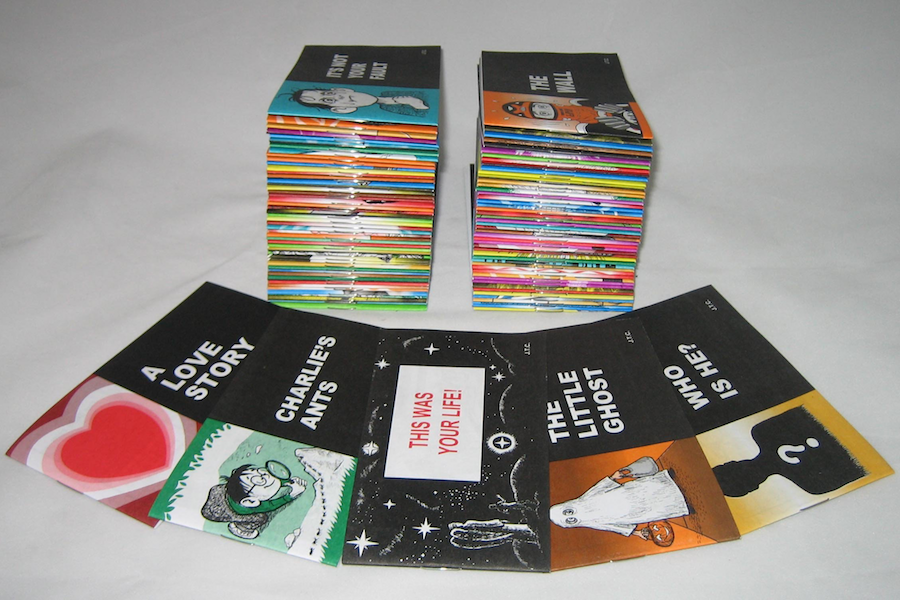 I found this bundle of Chick Tracts for sale on Amazon.

You know what Chick Tracts are, right? They’re those little, 24-page Christian fundamentalist comics you sometimes see laying around on subway seats, though not as much anymore. They’re the handiwork of writer/illustrator Jack T. Chick (1924-2016). If it helps: One popped on Rick & Morty not long ago.

The first time I read a Chick Tract, it terrified me. I was 15 or so, maybe older. I assumed it would push the usual kid-friendly version of the Christian god. Be kind. Share. Golden Rule type stuff.

This was about a dude who hemmed and hawed about whether he should accept Jesus into his heart. Finally, he’s like, okay, know what, I’m in. I’m tuckered out right now, but I will officially accept Jesus into my heart first thing in the morning. Then the guy dies in his sleep and is transported right to hell to spend eternity in torment.

WTF? That is one strict stickler of a god.

The lesson: God doesn’t mess around and neither does Jack Chick.

This Saturday, PhilaMOCA is hosting “Merry Chick-Mas — A Jack T. Chick Celebration,” featuring comics for sale, art on the wall, and a multimedia talk led Chick magnate Kurt Kuersteiner, author of The Unofficial Guide to The Art of Jack T. Chick. I did a quick interview with Kuersteiner via email recently about the mysterious comics, the man behind them and their enduring legacy.

Tell me a little bit about Jack Chick.

Jack Chick is the most published writer and illustrator who is publishing new stories — even a year after his death! Chick writes and draws Chick Tracts, the 24-page Gospel comic booklets that people find in bus stations, bathrooms, and any public place. He has published over 900 million of them in over 100 different languages since 1961, and he did all without the help of corporate money or mainstream publishing houses.

Although he died in October of 2016, he drew future new tracts, which his company has continued to publish, along with other tracts now written by his assistant (David Daniels) and drawn by Chick’s co-artist (Fred Carter).

Chick tracts are famous for delivering fire and brimstone fundamentalist sermons with cartoon pictures. They are also controversial for being politically incorrect, warning Jews, Muslims, Catholics, Buddhists, homosexuals, role-playing gamers, witches and Social Justice Warriors, (and many others) that they are doomed to hell unless they confess their sins and accept Jesus as their personal savior. Some of the tracts are also condemned for promoting various conspiracy theories, most of which involve Satan infiltrating respected organizations (like the Vatican or the Masons) and using them to corrupt others.

The controversies and resulting personal threats made Chick fear for his life, and until his death, he was famously reclusive and avoided the press. In fact, the only confirmed photos of him were from the 1940s. With over 265 titles (and countless variations), many of his tracts have become treasured collectibles. Although most of them originally sold for only a nickel, his rare titles fetch many hundreds of dollars in auction.

That one about the guy who goes to hell even though he was going to convert in the morning really rattled me.

Yes, Chick is well known for his fundamentalist belief that God doesn’t throw punches when it comes to salvation. You either confess your sins and believe in Jesus, or you burn. Good works and good intentions won’t prevent your all expense paid journey to Lava Lake! (Move over Mother Teresa. Get ready for another Pope lover, Billy Graham, to splash down soon.)

Likewise, readers are often disturbed when murderers and child molesters enjoy a life of care-free crime, only to confess and convert at the last minute and spend eternity in Heaven. (So don’t be surprised if you’re greeted in Heaven by serial killer/rapist Jeffery Dahmer — who became a born-again Christian just before getting murdered in prison.)

What are some of your favorites?

Nearly everyone has a favorite Chick Tract. It’s usually one they found in some unusual circumstance, when they were still unaware of what Chick Tracts are. The second Chick Tract I ever stumbled across was “Holocaust.” It’s a tract that tells the story of how a Holocaust survivor used to blame the Nazis for the millions killed during WW2, until a wise Christian explained to him that it was really an Inquisition carried out by Roman Catholic Hitler for the Vatican.

The tracts that feature the witchcraft conspiracies of John Todd (co-starring the Illuminati) are personal also favorites, as are the spiritual warfare tracts inspired by Dr. Rebecca Brown (where Satan can be conjured up to dispatch enemies, but gets beaten-up when the targets are “true Christians”).

Do you think Chick’s books were effective in their purpose? Do you think he thought he’d won hearts and minds with his comics?

With over 900 million Chick tracts distributed throughout the world in over 100 different languages, if only 1 in a thousand had the desired effect, Chick tracts would have “saved” nearly a million people. We know that they have affected thousands because Chick Publications continues to receive hundreds of letters every year from grateful converts. They often publish segments of these letters to their readers of Battlecry, a self-published newspaper that Chick started publishing every other month since 1984, in response to Catholic pressure to close down his business. (Obviously, the Vatican failed in that conspiracy, haw-haw-haw!)

I have no doubt that Chick sincerely felt his tracts helped many people. He was also painfully aware of the hatred and contempt they inspired in most of his critics, many of whom were also self-professed Christians (but not fundamentalists). Chick ignored both adversaries because he felt he was fulfilling God’s will, not only based on his reading of the scriptures, but also in his personal relationship with Jesus, whom he communed with through regular prayer. Although this might seem ridiculous to the secular world, Chick followed the advice he received in those prayers to guide him through many tough decisions. It made him the king of independent comics, a highly competitive field. It may have been fool’s luck, or else God may have had his finger on the scale to help Chick.