The pop legend plays the Wells Fargo Center with Mariah Carey this week. 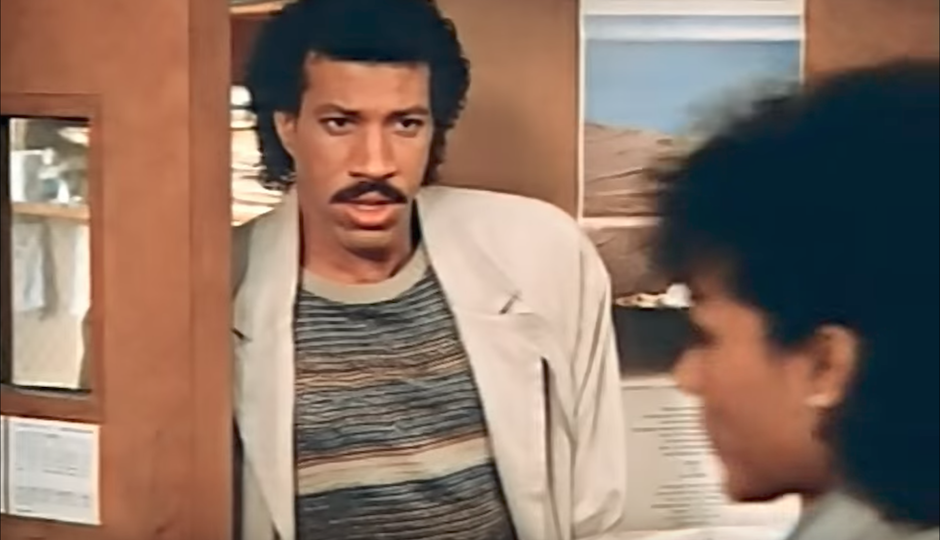 Maybe stop asking the blind lady if she’s looking for you.

Pop megastar Lionel Richie is currently on the road with his All The Hits Tour — and looking back, it’s an impressive number of hits. Solo and with The Commodores, Richie’s list of memorable songs includes: “Easy,” “Three Times a Lady,” “All Night Long (All Night,)” “Say You, Say Me,” “Dancing on the Ceiling,” and on and on. The tour touches down in Philly on Wednesday.

Which brings us to one of the most important music videos of the MTV era. Released in 1984, “Hello” is a gorgeous, wondering love song but it’s the video, placed in heavy rotation, that made “Hello” an inescapable part of the pop landscape.

The premise is a strange one: Lionel Richie plays Mr. Reynolds, a high school acting coach who has the hots for one of his students. First, let’s watch:

[0:00-0:59]
Decked out in a blazer as smooth and creamy as a pint of vanilla bean Frusen Glädjé, Mr. Reynolds describes the scene his students will be performing. It’s about recently released convict Tony Billy Boy asking out Amanda, a woman who’s never been in jail. What a surprise, Mr. Reynolds casts his favorite student Laura for the female lead. He doesn’t seem to notice that she pronounces “Paramount” incorrectly.

[1:00-1:20]
Mr. Reynolds is so smitten with Laura and her enormous picnic tablecloth shirt that he breaks into song. Nobody notices because Mr. Reynolds is a wraith, able to step outside of the physical realm. “In my dreams I’ve kissed your lips a thousand times” he sings while staring and shaking his head in an “I’m going to jail for this” kind of way.

Please note that in the ’80s, it was considered a plot twist to withhold something basic about a character only to reveal it a little later to make you feel bad for making assumptions. For instance, there were dozens of commercials, shows and movies in which a welder pulls off his mask to reveal he was not a he at all but in fact a she aka a woman! A woman welder!

So yeah, Laura’s flute class is ending and somebody hands her a cane. (Even though, unless the blindness is a recent development, she probably knows where her cane is.) Mr. Reynolds, still singing, watches her from the hallway. As she passes, he directs his words at her but she doesn’t react. This is because:
a) she’s also deaf
b) he has again assumed his ethereal form
c) that’s how good she is at acting

[2:00-2:02]
Here we go. Mr. Reynolds, now wearing a Colorado Avalanche throwback sweater, just dropped the L bomb. I’m correct in saying this is high school, right? The students have lockers. Nobody is called “professor.” I mean, sure, she looks like she’s 25, but there are rules.

[2:03-2:15]
Laura is led to her desk at sculpture class. We see only bits and pieces of what she’s working on. Its it a lion? A tribble? Whatever it is, it’s enormous. Somewhere in the back of the class is a mean girl complaining that Laura used up all the clay but no one will say anything because she’s blind.

P.S. Is nobody studying math or science? These kids are in for a rude awakening after graduation. 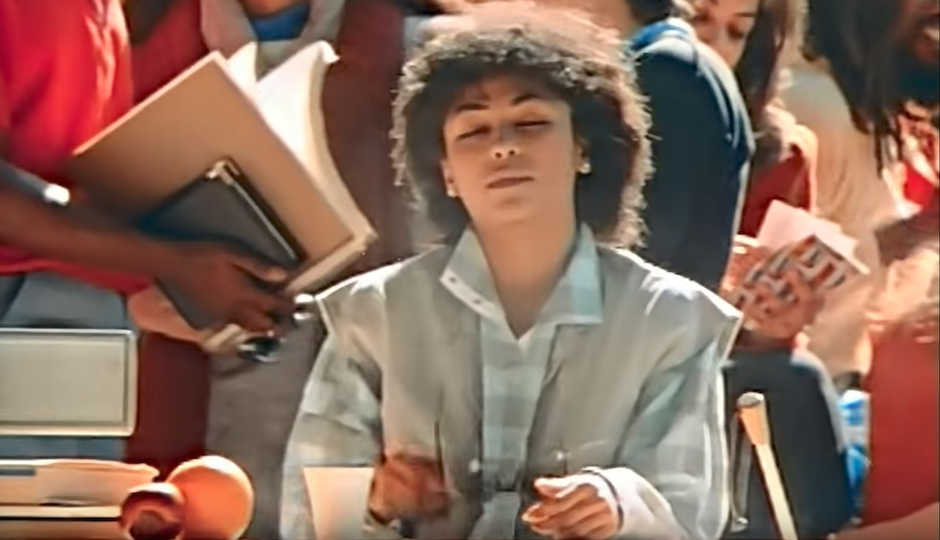 A ruse is afoot.

[2:18-2:30]
She prays before eating a miserable lunch consisting of a Styrofoam cup of coffee, a single apple and a single orange. She smiles when her friends join her. All the while the Mr. Reynolds Wraith circles the room, pining and creeping.

[2:30-3:11]
Mr. Reynolds pulls open the doors to a dance class, indicating he is once again able to interact with the material realm. “Girls, please pretend that Mr. Reynolds has not just walked in on a dance class for young women. There’s nothing we can do. He’s a being from another plane of existence and we are powerless to stop him. Also, I heard he’s the principal’s nephew.”

It’s worth noting that the lyrics here in no way match the action, which is sort of a vindication for Lionel Richie. This was a regular love-from-afar kind of song. The pervy teacher stuff was somebody else’s idea.

[3:12-3:18]
Back in acting class, Laura (as Amanda), tells Tony Billy Boy there are “too many memories, too many ghosts” — the most overt clue that she knows something otherworldly is going on.

[3:19-4:33]
Laura’s wearing silk pajamas and reading Braille on a giant bed. The phone rings, and what do you know, the creature stuck between worlds who makes her school life a living hell is now calling her at home.

Without introducing himself, Mr. Reynolds — now sleeveless and sporting a collar so popped he can barely turn his head — says one of the cruelest things he can say to a blind person: “Hello, is it me you’re looking for?” Then he hangs up.

She smiles through the pain. She smiles because she has a plan. 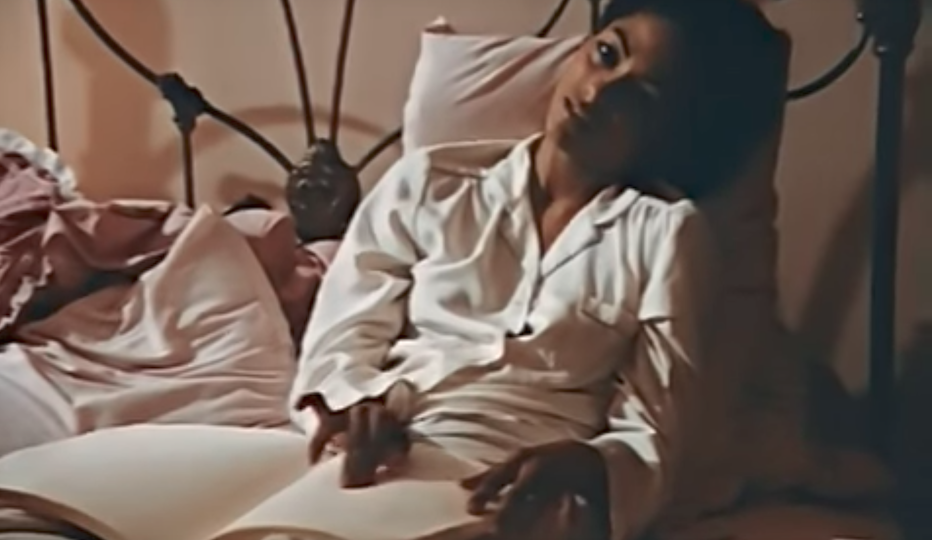 “With this book of spells I will get my revenge.”

[4:34-4:47]
Having returned to his physical form, Mr. Reynolds is doing a Phantom of the Opera type thing in the theater. A dude walks in and says, “Mr. Reynolds, excuse me but there’s something going on in the sculpture class. I think you oughtta check it out.”

Normally a line like that would warrant several follow-up questions. But this is the Haunted School of Arts and Perverts, so Mr. Reynolds just shrugs his nerf shoulders and walks over to find Laura thumbing a massive clay sphere.

[4:48]
Mr. Reynolds lets the door slam behind him. He does it to show Laura know there is no escape, but in fact this noise signals that a shift in the balance of power. The tables are turning.

Only then do we see what she’s been sculpting. It’s a vicious satire, a hateful likeness of Mr. Reynolds so exaggerated and cruel she can’t help but let slip a smug smile. The hair is a cascade of moss and coral. The chin is thick, grim, ogre-like. The brow resembles that of an oxen, or some other dim beast capable of only stupid thoughts.

The implication is obvious. She’s not blind after all. She saw him perving on her the whole time.

Crestfallen, Mr. Reynolds says nothing. Laura reaches out and smears clay all over the face of her stalker.

In a final act of defiance, he yanks her hands away and tries to deliver his “is it me you’re looking for” taunt, but it no longer holds power over her.

In the last shot, the witch smiles. The screen goes dark and we are left to imagine the many ways in which she will exact her revenge. 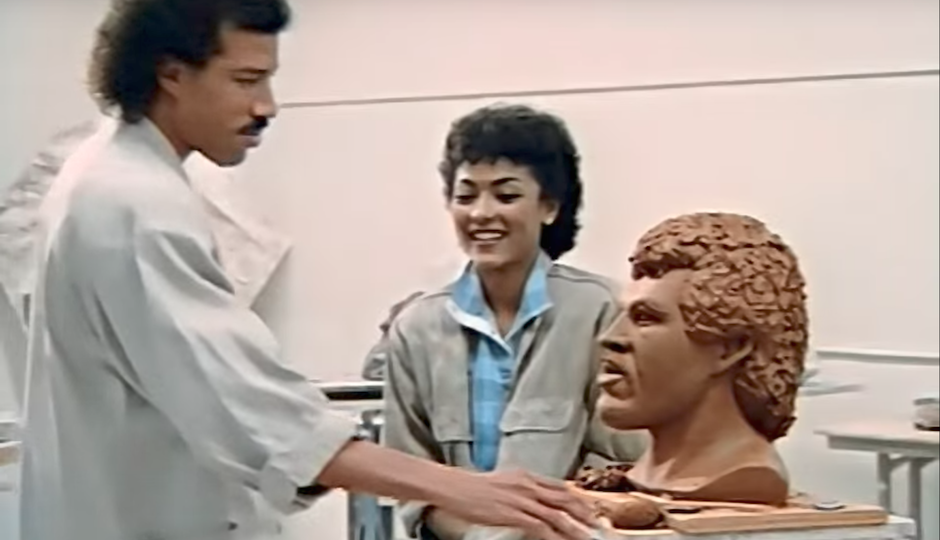 “Look upon the hideousness of your true self.”