THEATER REVIEW: In How to Use a Knife, Life in the Kitchen from Simmer to Boil

This rolling premiere production shows InterAct at the top of their game. 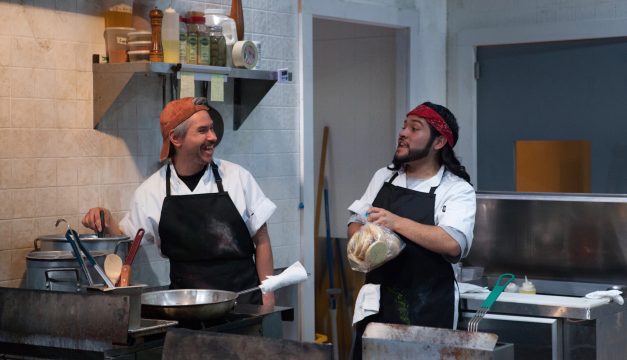 J Hernandez and Angel Sigala in How to Use a Knife at InterAct Theatre. (Photo by Kate Raines)

God is in the details, as they say. Watching InterAct’s marvelous production of Will Snider’s How to Use a Knife, I was struck again and again by how much theatrical realism depends on getting all the little things just right. You see it here from the start—a rare kind of authenticity, evident immediately in Colin McIlvaine’s set and Robin Stamey’s lighting. We could be looking in on an actual working diner kitchen.

But it’s only the beginning. These actors disappear fully into their characters, especially J Hernandez and Angel Sigala, who (often speaking in Spanish) bring the kitchen cooks brilliantly to life. Prepping and cooking the food, squabbling to get the orders out on time, their interpersonal relationships captured in even in the tiniest looks—yes, we think: this is real life.

Instantly, I remembered a landmark work of realistic theater from the 1950s, Arnold Wesker’s The Kitchen. The resemblance is deliberate, I think. Wesker similarly put a fully-equipped restaurant kitchen on the stage; more importantly, he saw the staff and their conflicts as a political metaphor. For Wesker, the focus was capitalist oppression. That’s still an issue, of course—but 60 years later, race and immigration now occupy (so to speak) the front burners.

The themes play out here in the growing friendship between George (Scott Greer), a newly-hired chef, whose job is to raise the standards, and Steve (Lindsay Smiling), a quiet, self-possessed dishwasher, born in Uganda. George is a white American; Steve a black African. But their similarities are more striking. Both are fighting to overcome crippling pasts. George’s drug and alcohol addiction ruined a promising career in Michelin-level restaurants. Steve is less forthcoming about his early life, but it clearly involved a close-up view of war and its horrors. 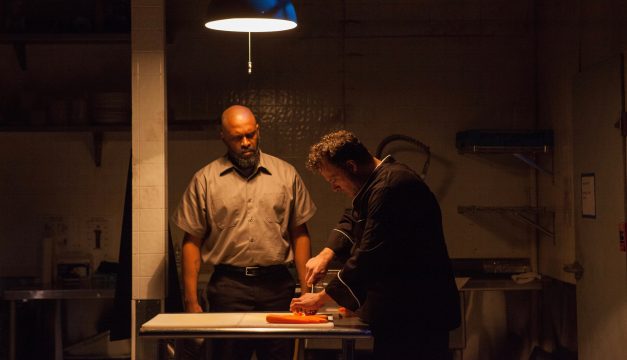 Lindsay Smiling and Scott Greer in How to Use a Knife at InterAct Theatre. (Photo by Kate Raines)

Through Snider’s provocative script, George and Steve grow closer, and we understand more about them—but we also have more questions. In the 100-minute running time of How to Use a Knife, the tension mounts and never subsides—enhanced by Seth Rozin’s terrifically-paced direction, full of staccato rhythms and sharp transitions; also, Larry Fowler’s fine sound design. (Check out the fantastic effect when George teaches Steve how to use a knife—the overheard light goes on, and presto: we are, in every sense, plunged into film noir.)

InterAct’s production of How to Use a Knife is part of the National New Play Network Rolling Premiere initiative, and it is, frankly, a gift to Snider’s play—it’s hard to imagine it done better. The mix of humor and darkness in George is exactly what Scott Greer does best; Lindsay Smiling’s dignified yet also opaque and disquieting presence is riveting. Individually and together, they’re superb.

And How to Use a Knife deserves it. This is no work in progress, but a fully-formed, richly textured, provocative play. Only one supporting character—the restaurant owner, who is given a motor-mouthed, Neil Simon-esque delivery—strikes a falsely performative note.

Next year, InterAct turns 30 years old. What a joy to see the company, newly invigorated in their home at the Drake—at the top of their game.

How to Use a Knife plays through June 18. For more information, visit the InterAct website.