The Weekly Five: How the Eagles Can Still Win the NFC East. Plus: Which QB Is a Lock for MVP? 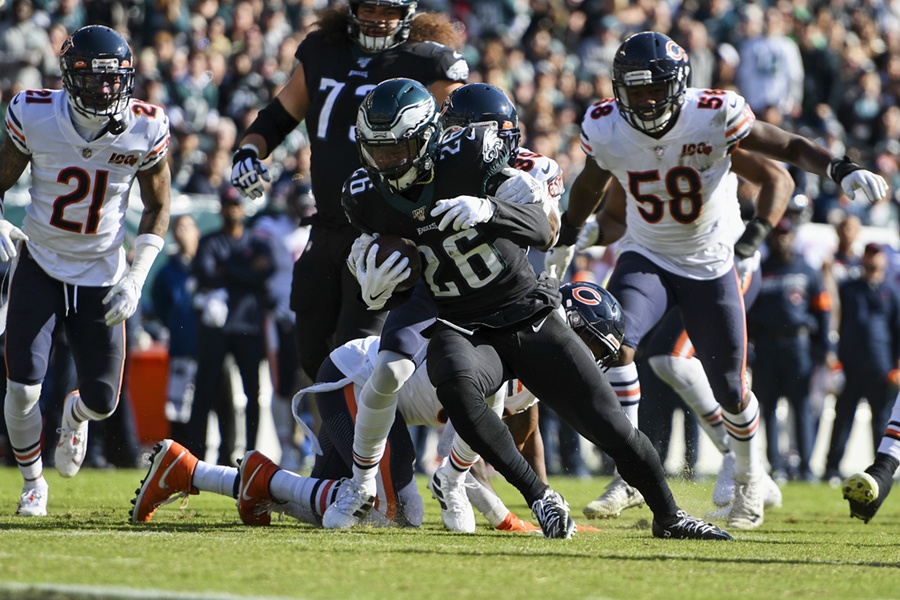 Katie Kohler is an award-winning journalist with more than two decades of experience covering suburban Philadelphia. She still has Super Bowl LII, the Action News post-game and the Super Bowl parade on her DVR and watches them at least twice a month. She angry-tweets during games and will also be contributing insight and NFL betting trends throughout the season.

What good news do you have for Eagles fans right now?

The Eagles are tied for first place! For all the injuries and the awful losses (Atlanta, Dallas, Lions) this is the best-case scenario. While the Eagles like to say “We are focused on going 1-0 this week,” it doesn’t mean the fans have to possess the same mentality. The NFC East is the Eagles’ to lose. Look at the Eagles’ remaining schedule and the Cowboys’ remaining schedule:

Dallas: AT Lions, AT Patriots, Bills, AT Bears, Rams, AT Eagles, Redskins

The Eagles have the easier path. Yes, the next two games are tough. A split should be considered survival. But the Birds should and will be favored in the final five games. So, continue to cheer for Dallas to lose because it brings joy, but it’s really up to the Eagles to take care of business.

Who can fill DeSean Jackson’s spot?

With DeSean Jackson out for the season, the Eagles need to move on from him. Enough time has been wasted on waiting for Jackson. It’s time to focus on who is here. Carson Wentz is the leader and fuel of this offense. He’s kept them in games and maintained his cool amid adversity.

With Jackson out, the Eagles should embrace the run more with Jordan Howard and Miles Sanders. Sanders looks like he can be special. Doug Pederson needs to get the ball in his hands in more creative ways.

The best receivers are tight ends Zach Ertz and Dallas Goeddert. Use the 12 personnel (one running back, two tight ends, two receivers) until a defense shows they can stop it.

Seattle. Their Monday night overtime road win against the 49ers was worth staying up for. How can you not be impressed when you ruin a division rival’s perfect season? Russell Wilson deserves the MVP hype. But after this crazy game, I came away with strong feelings about their defense that turned in their best performance of the year. Of course, from the Eagles slant, I am super-bitter they didn’t fork over the third-round pick for Javedeon Clowney. He had a monster game.

That question varies by sportsbook. After a win against San Francisco, Seattle quarterback Russell Wilson is the favorite at FanDuel Sportsbook at +160.

The answer to who is the most electrifying quarterback in football comes down to Patrick Mahomes (+1200) and Lamar Jackson (+260), both of whom are in the MVP discussion.

The Ravens handed the Patriots their only loss of the season, and Jackson followed it up with a perfect passer rating against the Bengals. Jackson also averages 78 rushing yards per game. The Ravens will put their five-game winning streak on the line when they host the Texans on Sunday.

Sidelined with a dislocated kneecap since October 17, Mahomes threw for 446 yards and three touchdowns in Week 10. But the Chiefs lost to the Titans and have lost four of their last six games. Now Mahomes faces the Chargers on Monday night.

What will be the closest game for NFL Week 11?

Jacksonville vs. Indianapolis (-3) is a toss-up, even if Jacoby Brisset plays. However, it is Saint Nick season. Nick Foles returns to the lineup after suffering a broken collarbone in Week 1. Minshew-magic has faded. Foles will be eager to reclaim his starting job, prove he is worth the hefty contract, and show that his swagger can survive outside of Philly.