The Weekly Five: The Most Critical Eagles Injuries, Ranked. Plus, the New Super Bowl Favorite (Hint: It’s Not the Patriots). 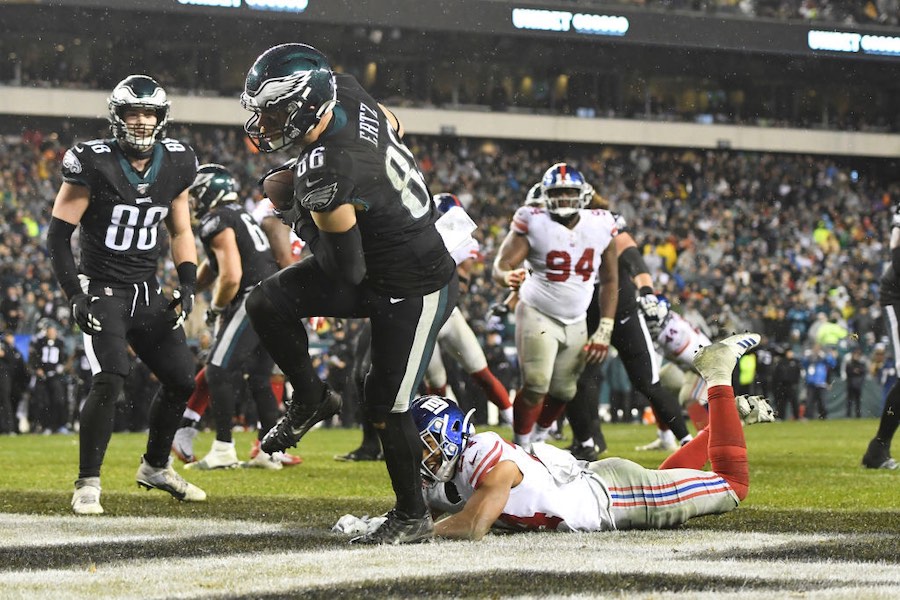 Katie Kohler is an award-winning journalist with more than two decades of experience covering suburban Philadelphia. She still has Super Bowl LII, the Action News post-game, and the Super Bowl parade on her DVR, and watches them at least twice a month. When not busy sending angry tweets during games, the lifelong Eagles fan will contribute insight and NFL betting trends throughout the season.

How are the Eagles’ playoff odds looking this week?

The Eagles control their playoff destiny. After a listless first half against the New York Giants, the Eagles took flight with a 20-point second half. Can the Eagles carry that momentum into Week 15’s matchup against the Washington Redskins? A second straight victory would set the table for a season-defining showdown with the Dallas Cowboys.

What’s the most important consideration for the Eagles heading into the next game?

The team’s health will be a critical factor down the stretch. The only thing the MNF crew talked about more than “The Book of Eli” was the Eagles’ decimated wide receiving corps. In order of importance, watch to see if these players are able to suit up against Washington: Lane Johnson, Jordan Howard, Derek Barnett and Alshon Jeffery. Week 15 could provide an opportunity to recuperate before facing the Cowboys.

Even if the Eagles make the playoffs, they still need to make a change. What do they need to focus on?

If the Eagles win out, they will win the NFC East and host a wild-card game. Making the playoffs shouldn’t mask the major challenges they face, however. The Eagles are the third-oldest team in the NFL. Their receiving depth and secondary needs a major overhaul. And some members of the coaching staff—namely, Mike Groh—should be on the hot seat.

The Kansas City Chiefs. Most Pennsylvania sportsbooks have them at +800 with four teams ahead of them on the board.

Patrick Mahomes has thrown for 21 touchdowns with only three picks. He’s averaging nearly 300 passing yards per game. While the hype train has moved on to MVP candidate Lamar Jackson and the Baltimore Ravens, this creates betting value for Kansas City. The Chiefs are legit Super Bowl contenders, with a defense good enough to beat New England.

The Tennessee Titans. Since taking the starting quarterback job from Marcus Mariota, Ryan Tannehill has led the Titans to a 6-1 run. The former Miami Dolphin has completed 15 touchdowns with four interceptions in that span.

Running back Derrick Henry is tied for the league’s rushing lead in touchdowns (13), and places second in rushing yards (1,243). Buoyed by a four-game winning streak, the 8-5 Titans are tied for the lead in the AFC South.

SPONSOR CONTENT Your Pre-Game Guide to the Eagles-Cowboys Showdown