A builder with an eye for design steps out from his brother's shadow and shows off his distinctive sense of style with his first solo project. 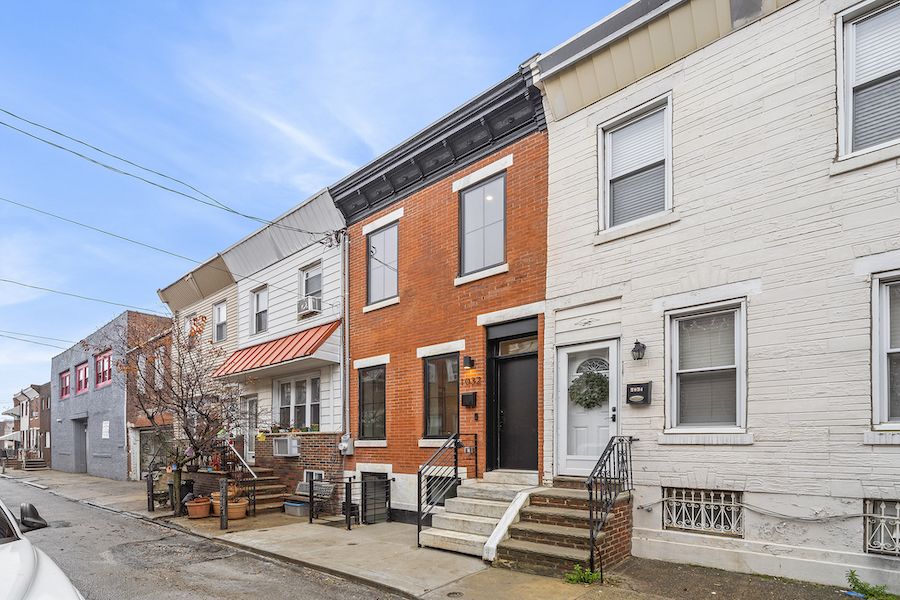 Another day, another rehabbed workingman’s rowhouse. But wait — look at the windows. Those signal that this rebuilt house at 1032 Mercy St., Philadelphia, PA 19148 is far from run-of-the mill, and the details — like those mullioned windows — make the difference. / Photography by Shaun May Photography via Giappo Design+Build

Stop me if you’ve seen this before.

On second thought, don’t, because you haven’t.

Sure, on the outside, this rebuilt East Passyunk workingman’s rowhouse for sale looks like scores of renovations of this classic Philadelphia house type found in neighborhoods all over.

And even once you step inside, it has many of the hallmarks of what might be called the standard workingman’s rowhouse renovation, including the open metal staircase and exposed brick wall. 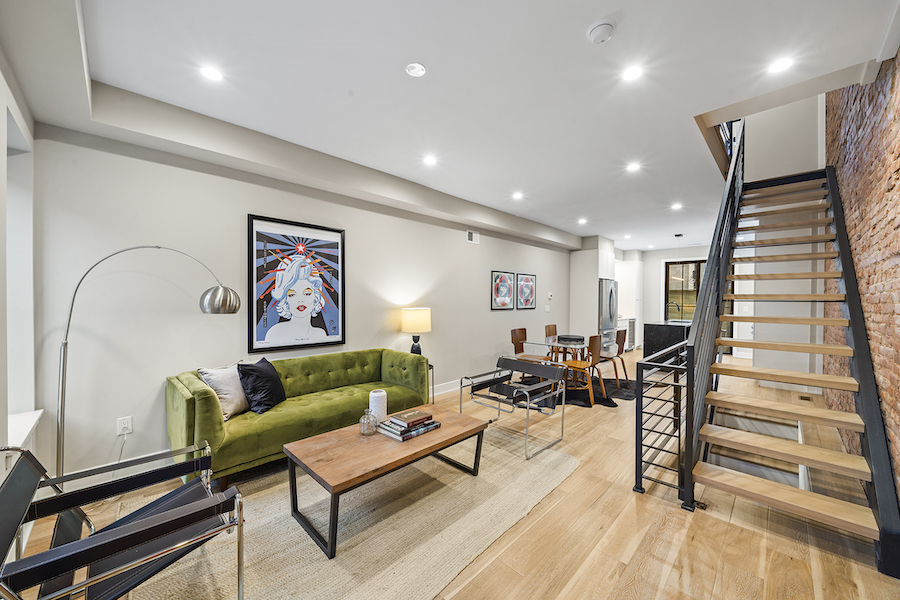 This makes some sense, because when you’re working with a space that measures only 17.5 feet from side to side, there’s not much room for variety.

But what distinguishes a creative rebuilder from a run-of-the-mill one, and a creative rehab from a garden-variety one, is what happens where there is room.

And that’s where Jeff Frederick’s reworking of this house stands out.

Frederick has been rehabbing houses for six years in conjunction with his brother. His heart, however, has been in their design from the start. “I studied art my entire life,” he says. “I went to art college. So I’ve always had an eye for design. And it just came naturally when I started doing these houses.

“But me and my brother had different ideas” — a more conservative, formulaic design sensibility, if you will. “And I never had complete creative control” over the design of the projects.

As any performing artist will tell you, creative control is a big deal. So it is with this particular form of performance art. It was big enough for Frederick to strike out on his own, forming his own firm, Giappo Design+Build. (Frederick is Italian-American, and “Giappo” was his family nickname.)

The house you see here is Frederick’s maiden voyage as a solo builder-designer. 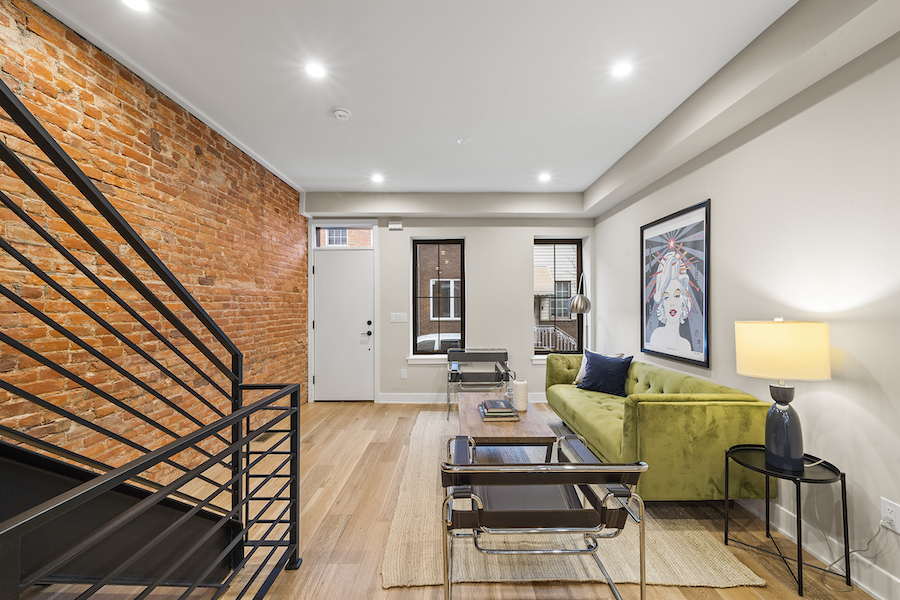 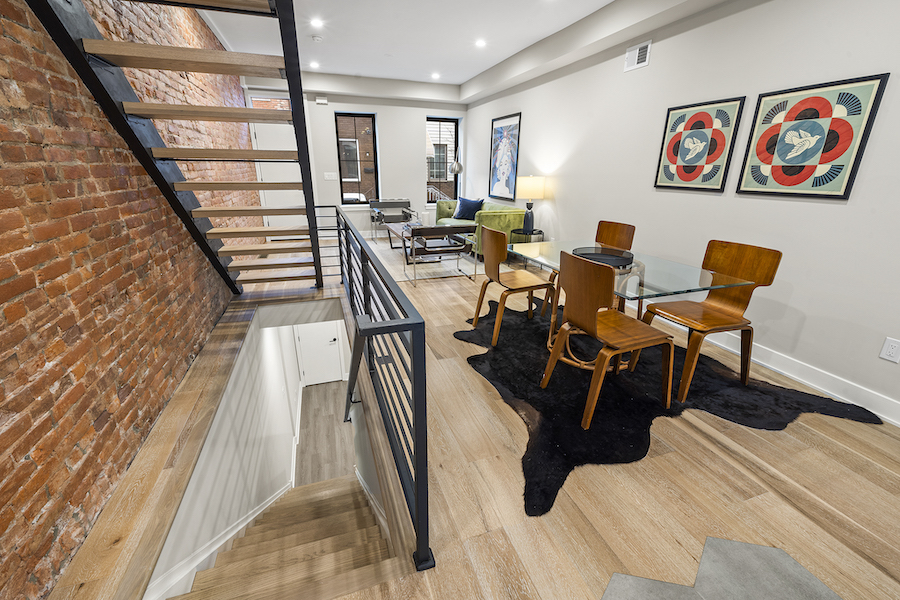 And there are loads of places where his flair for design comes to the fore. Take his choice of furniture for staging the living and dining rooms, for instance. 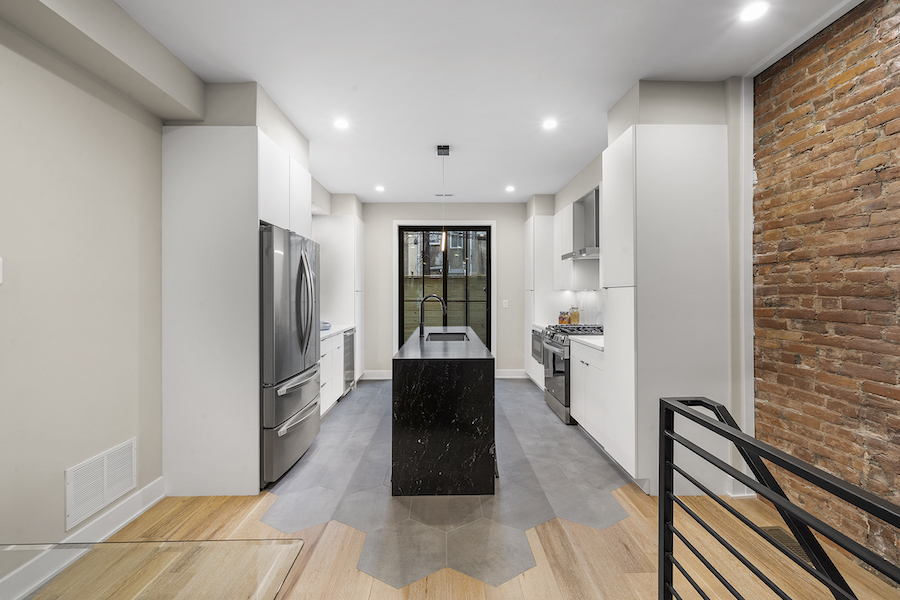 But the real showstopper is the kitchen at the back of the main floor.

Typically, rowhouse kitchens get shoved off to one side of the floor, so to speak. The kitchen here commands the back of the floor with Eurostyle cabinets flanking a central island with built-in seating for two. And the floor, which consists of large hexagonal gray tiles, also sets it off from the rest of the totally open main living space. 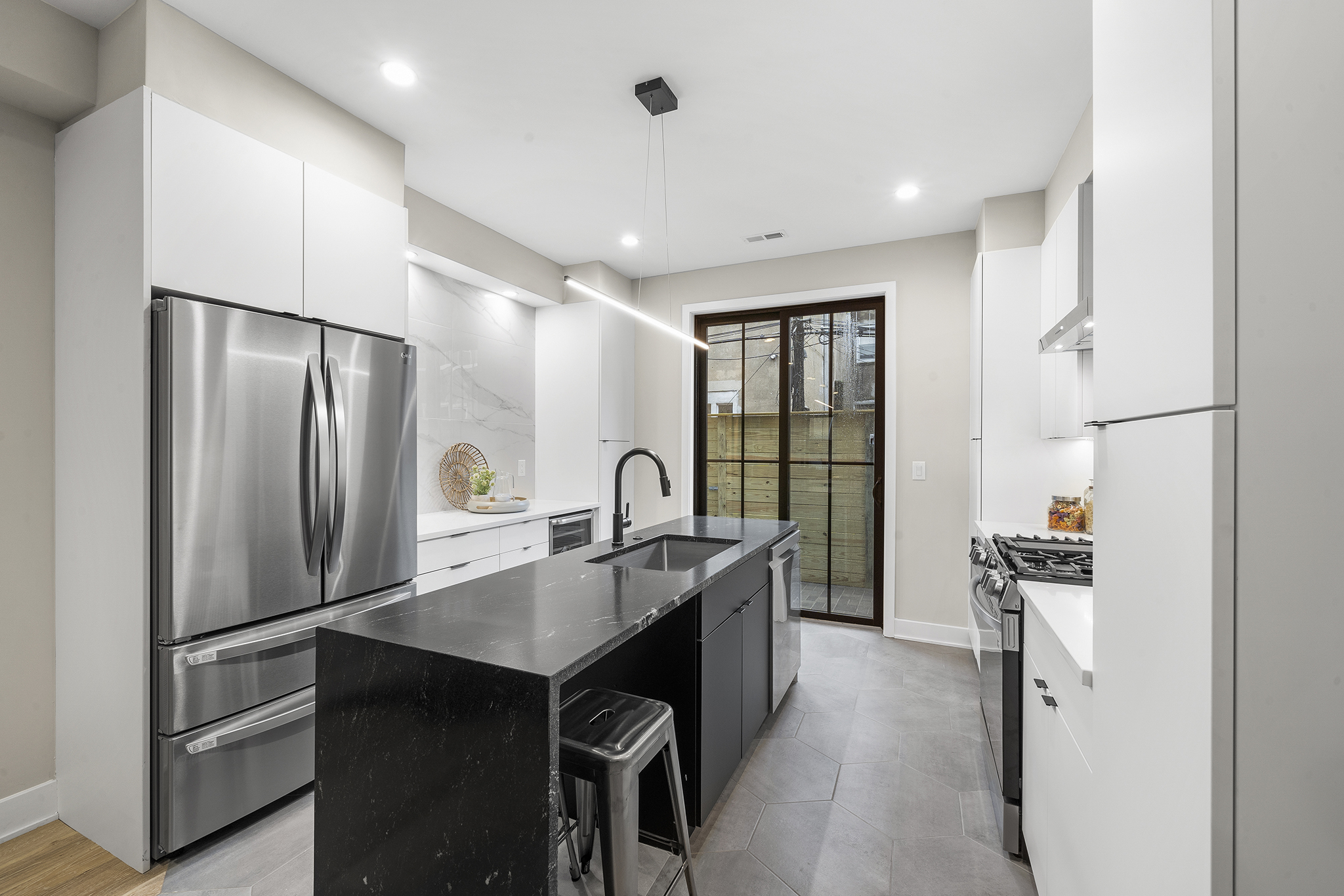 The side counters are topped with white quartz and have porcelain tile backsplashes. “In a perfect world, I’d have Carrara marble, but this isn’t an $800,000 house,” Frederick says. 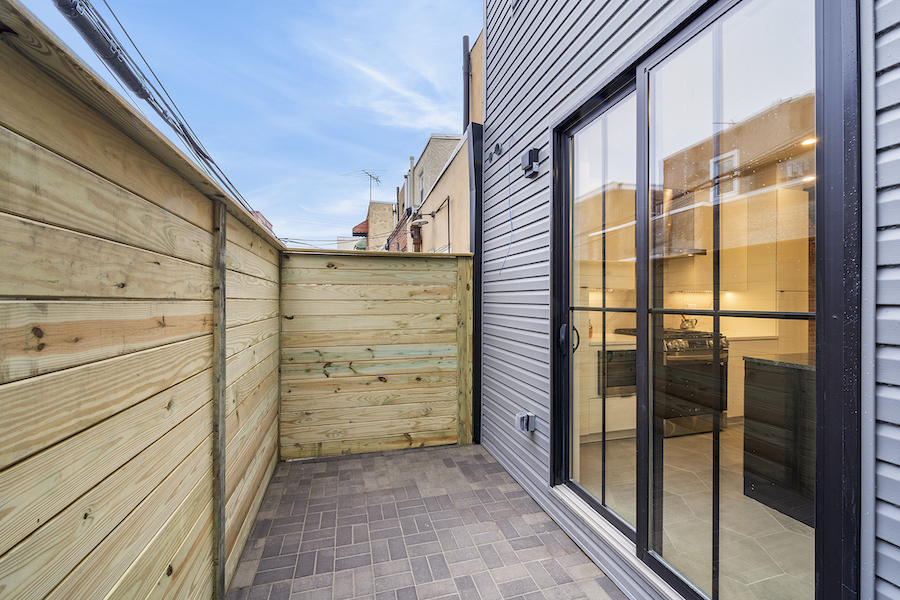 Large mullioned sliding doors lead from the kitchen to a rear brick patio ringed by a wood fence.

The open stringer staircase, whose treads are made of the same white oak as the floors, takes you to a second floor where Frederick got the most out of the constrained space. 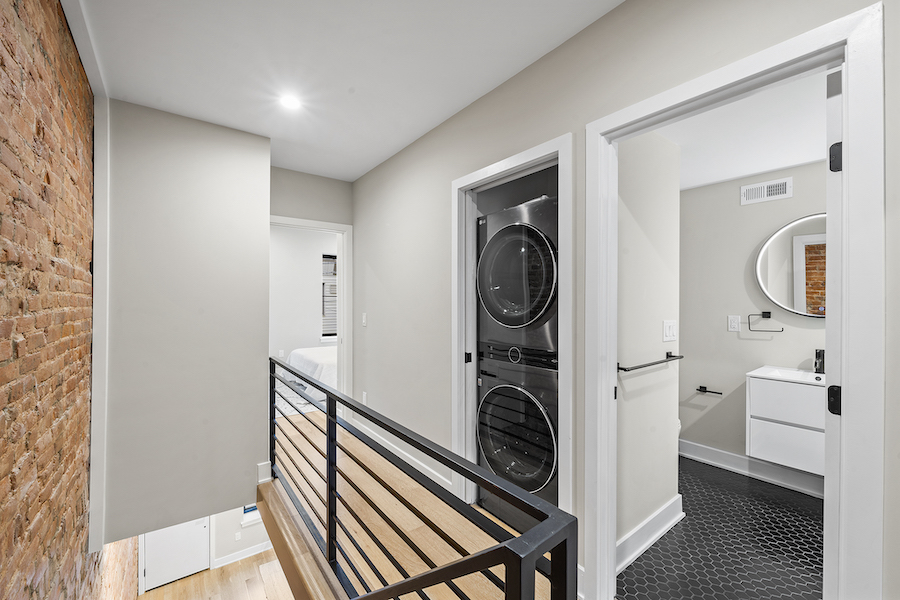 In total, it contains two bedrooms, two bathrooms and the laundry. For the laundry closet, he opted for a black LG Washtower stacked washer and dryer, which, he says, is the smallest stacked unit available. “I maximized every available inch of space so I could get the laundry in,” he says. “I didn’t want to cram the basement.” 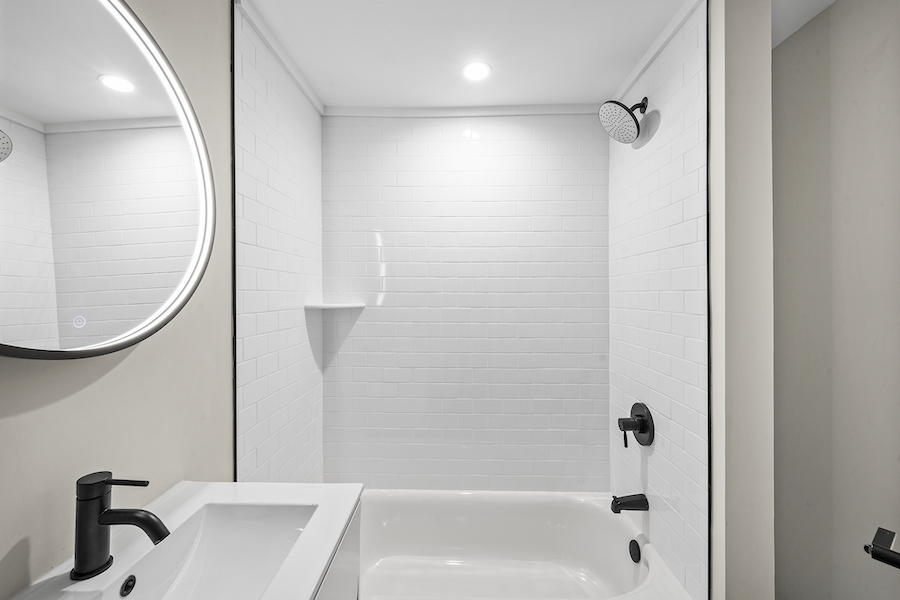 Not only did he get the laundry in, he also fit two bathrooms in the middle of this floor. The one serving the guest bedroom is another contrast in white and black, with a white vanity, toilet and tile in its tub/shower and black fixtures, hardware and trim. “I even replaced the flush button on the toilet, because they come in chrome.” 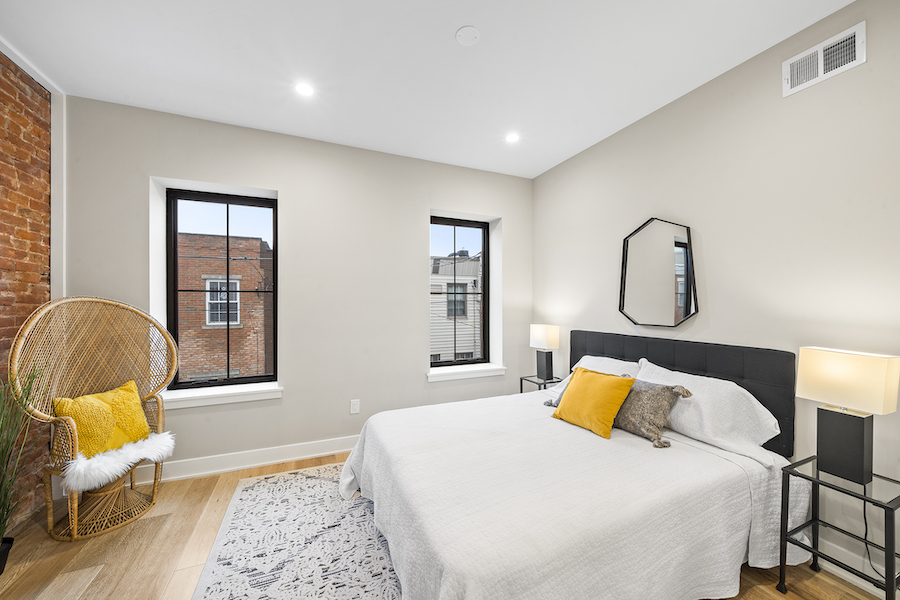 The black mullioned windows throughout also give this house a more classic look than many modern rebuilds. And he used the same quality Pella windows in the back and the front. The exposed brick wall that extends most of the length of the main floor also extends into the primary bedroom. 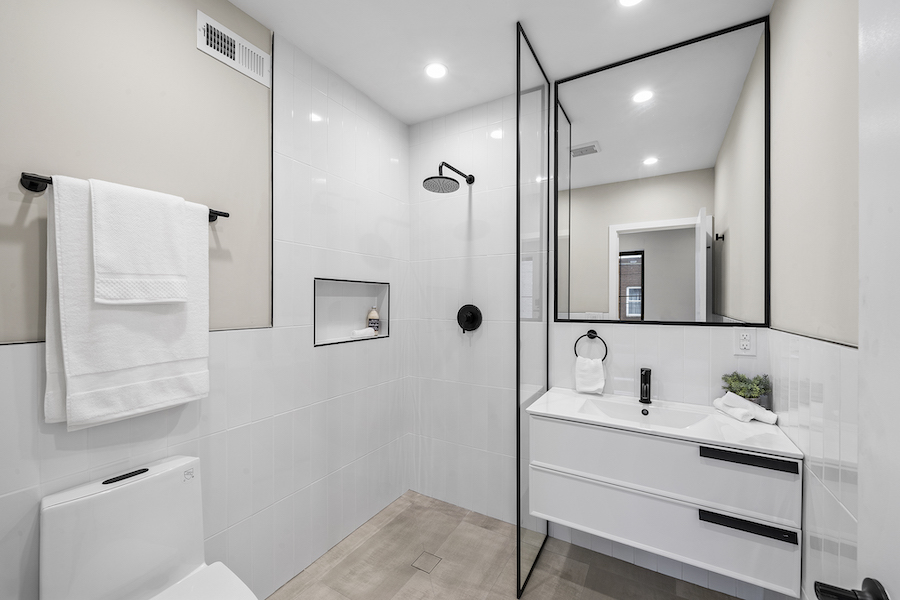 The last study in black and white comes in the primary bathroom. It also has a curbless shower, a feature Frederick says he had long wanted to incorporate into a rebuilt bath.

Several other things stand out about this rebuild, which added nine feet to its rear and excavated its basement to allow for a ceiling height of eight-and-a-half feet. One is the presence of the guest half bath in the basement. “One of the things me and my brother agreed on was no first-floor powder room,” he says. ”We don’t like powder rooms next to the kitchen.”

Another is the attention to detail. Where he couldn’t obtain fittings, fixtures or trim in the black that he wanted, he painted them. And, he said, he ignored his real estate agent’s recommendation to skip the drawer microwave in the kitchen: “He was like, ‘I wouldn’t spend the money,’ and I was like, ‘I can’t build this beautiful house and have an above-the-range microwave.’”

Speaking of spending the money, though, the asking price on this house will surprise you as well given the attention that went into its reconstruction. And that’s because Frederick didn’t spend money he didn’t have to. Porcelain in place of marble, or a $250 toilet that looks like an $800 Toto can go a long way in keeping costs down.

And not only is this East Passyunk workingman’s rowhouse for sale a real looker, it’s also in a really great location. The East Passyunk Avenue shopping and dining district is about four blocks to the north, and the Broad Street Line about four to the west.

It’s also close to the Snyder Plaza shopping center, where you will find a Target and an Acme supermarket. You can also get to Columbus Commons’ big-box stores, including Ikea, and the Pier 70 shopping center on SEPTA’s Route 79 bus, which runs along Snyder Avenue just steps to the south.

Between what’s in it and what’s around it, then, this house is a fabulous buy — a designer rowhouse without the designer price. (And if you aren’t in the market to buy but would love to give your own kitchen or bathroom some pizzazz, just give Frederick a call or visit his website — he can do it all for you.)

OTHER STUFF: There’s an open house this Saturday, January 7th.