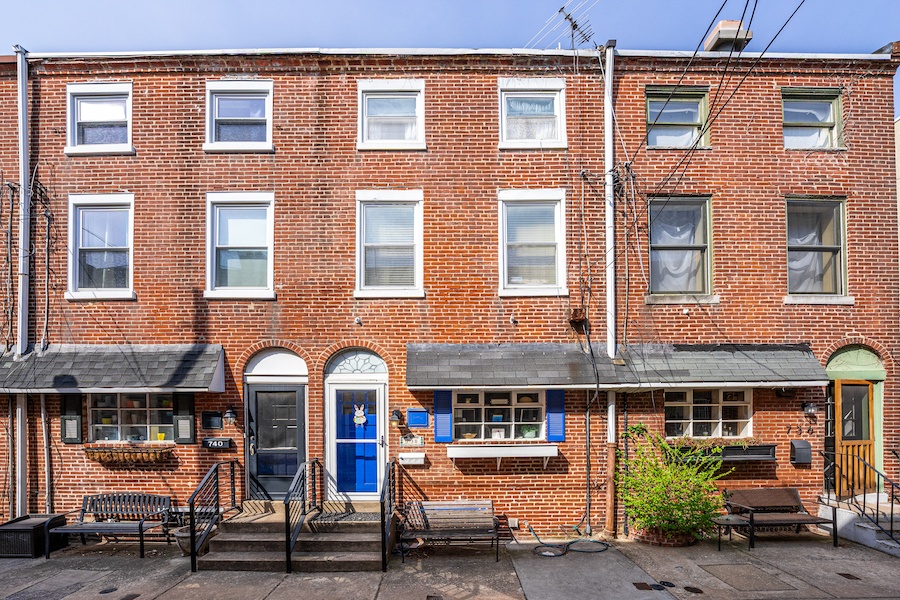 Is this cute trinity in South Philly or Center City? Its altered first floor says the former while its inside says the latter. These days, given its address of 738 S. Mildred St., Philadelphia, PA 19147, the answer could well be, Both. | Photos: Steve Edwards via Compass

The Central Philadelphia Development Corporation calls Bella Vista and the neighborhoods to its east, west and south part of “Greater Center City” — the bands of neighborhoods north of Vine Street and south of South that experienced the first spillover effects from the resurgence of the city center.

Even so, those neighborhoods retain several of their distinctive features that made them part of North or South Philadehphia before that happened. This Bella Vista renovated expanded trinity house for sale, for instance, shows the effects of two waves of renovation: It got the South Philadelphia update on the outside and the Center City one on the inside.

The giveaway to the facade update is the shingled canopy and wide nine-light window on the first floor of it and its immediate neighbors. This treatment was quite popular in the years immediately following the Second World War and mimics the facades of ranch houses popular in the suburbs at the time. 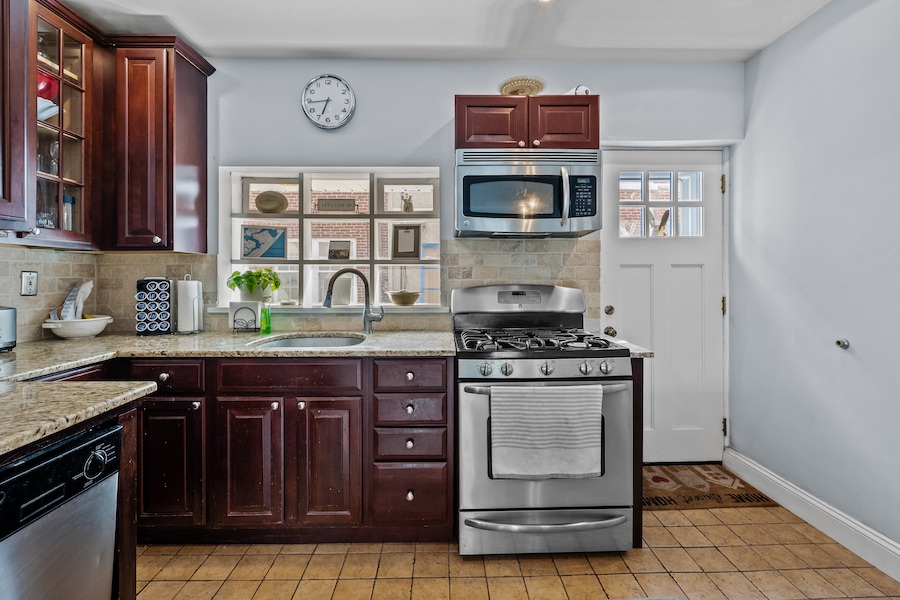 On the other hand, there’s nothing midcentury about the update this house got on the inside. That much should be clear the moment you step through the front door and enter its kitchen.

Said kitchen may have traditional cabinetry and a retro-classic subway-tile backsplash, but its origins are clearly very recent. The island with bar seating, granite countertops and stainless-steel appliances give the game away. 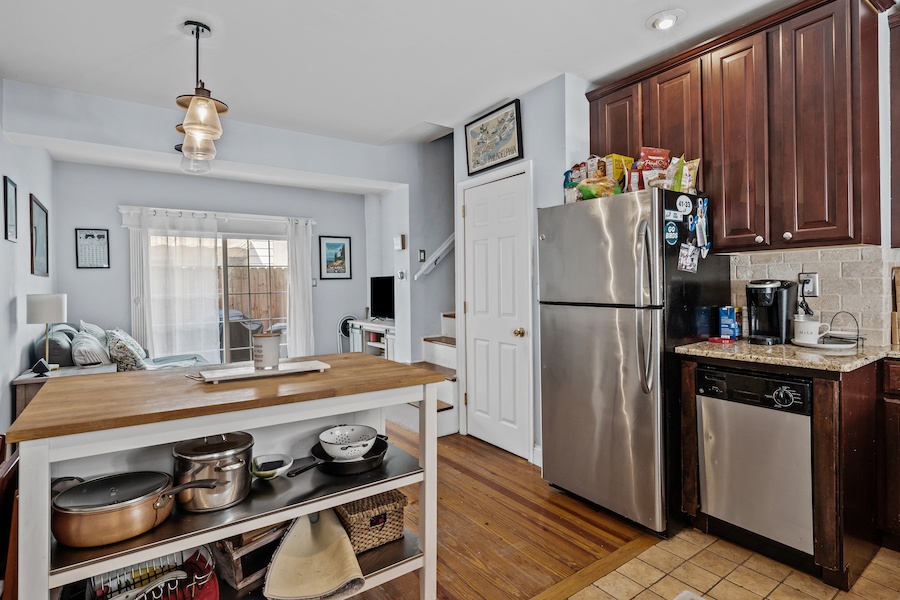 View of main floor from kitchen

The kitchen is one with the living room in the back of the main floor. You could conceivably swap the butcher-block island with bar seating for a dining table for four under the neotraditional lights in the middle, but then you’d give up storage space for your kitchen gadgets. 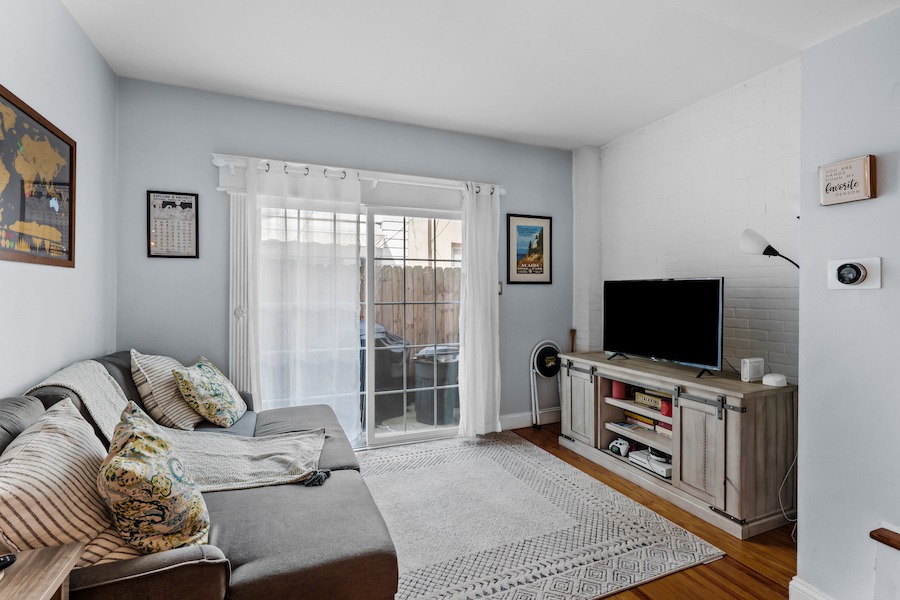 The open main floor gives this trinity an exceptionally spacious feel, and the French doors from the living room to the patio give it an exceptional amount of natural light. Note also how the owners have respected this house’s traditional roots while they modernized it. 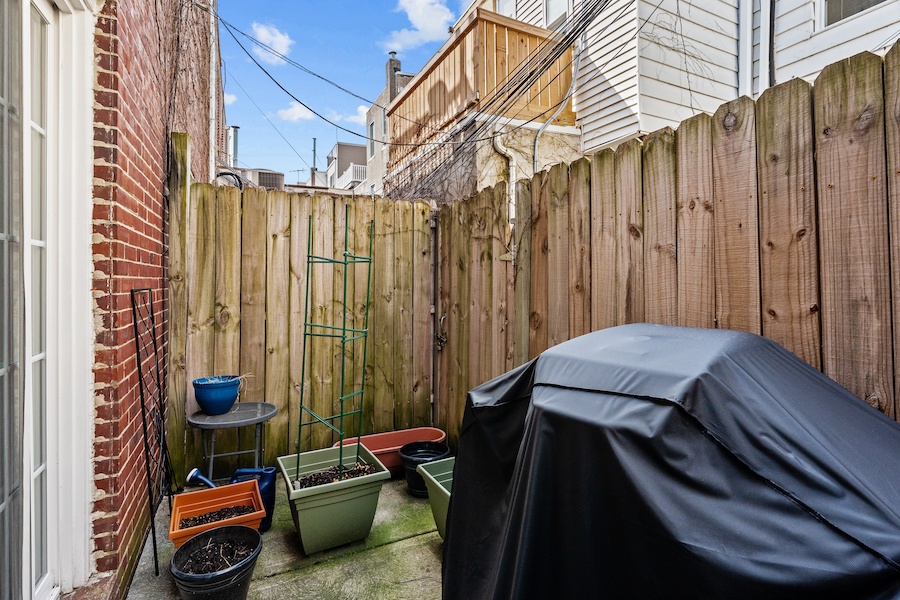 The rear patio, one of two outdoor spaces in this house, is your standard South Philly postage-stamp model, but it has enough room for a grill, lounge furniture and/or some plants. You might note that the tenant currently living here has added some planters for a touch of green; you could do that tenant one better by replacing the concrete pavement with a planter bed and permeable pavers. The city Water Department’s Rain Check program will help you pay for the improvements because they help reduce stormwater runoff. 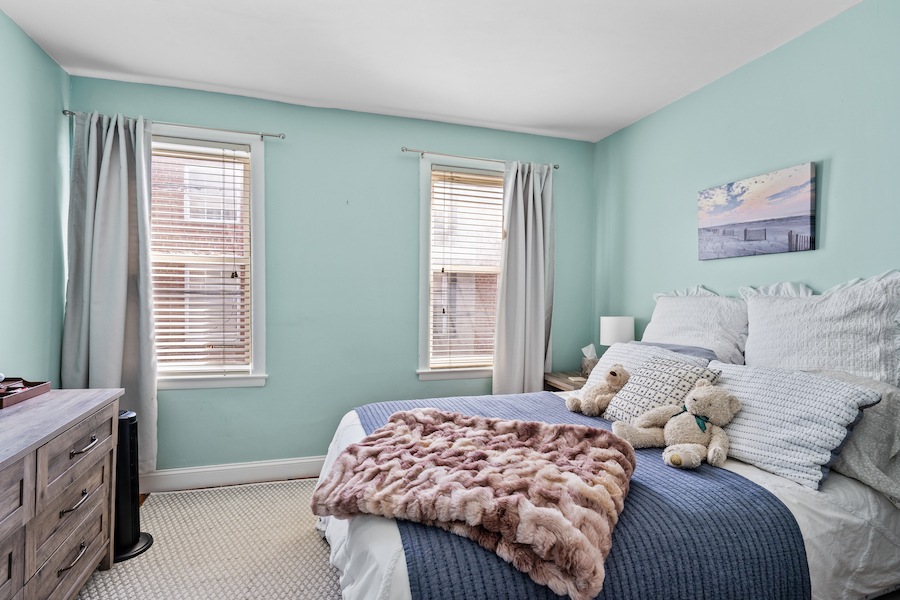 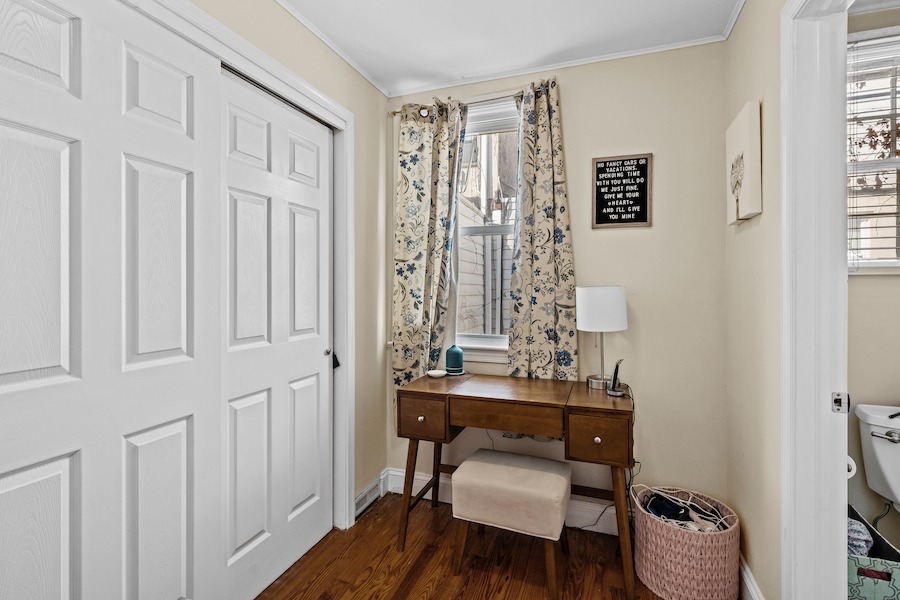 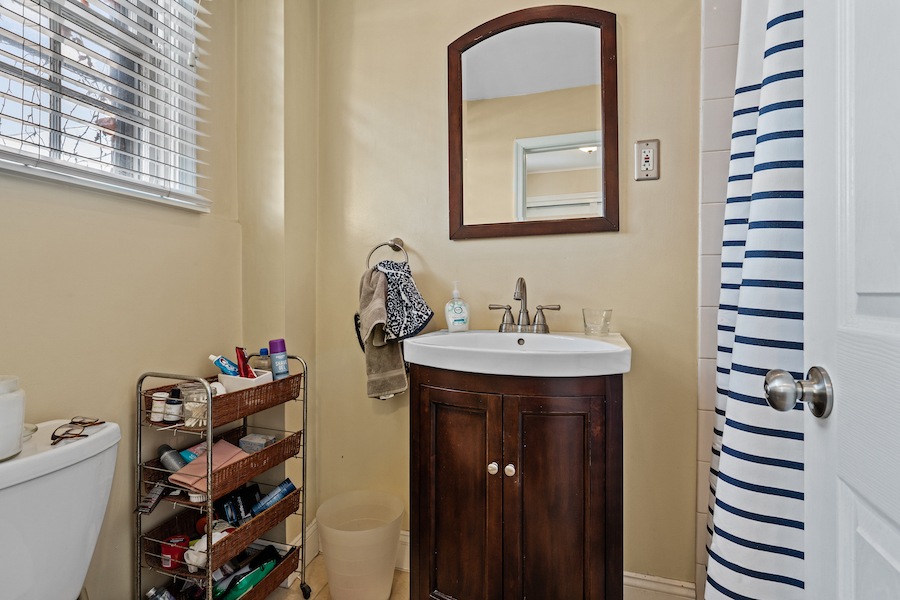 The second floor contains an attractive bedroom, the house’s bathroom and an equally attractive anteroom with closet space next to that bathroom. 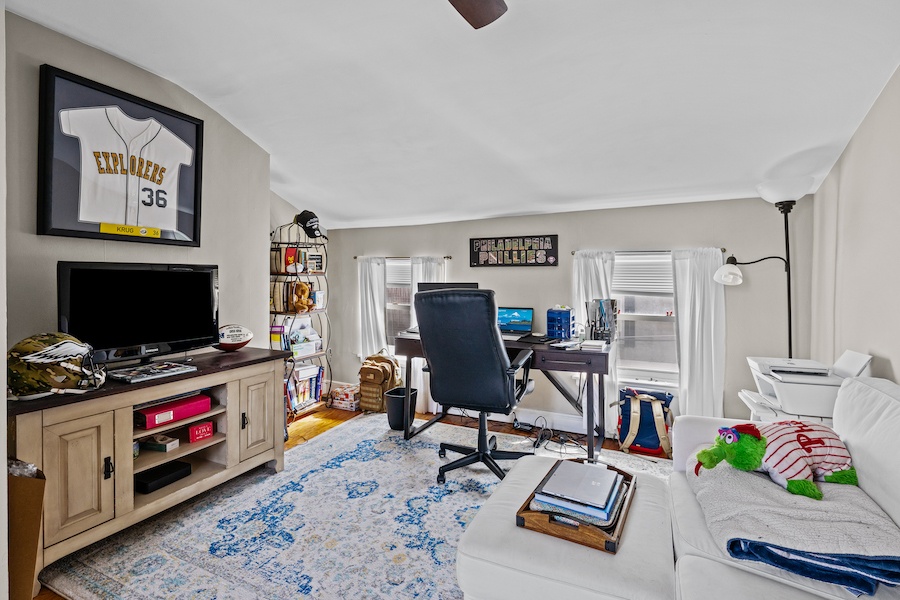 The primary bedroom one floor up currently functions as a home office; the owners, however, used it as their bedroom when they lived there. 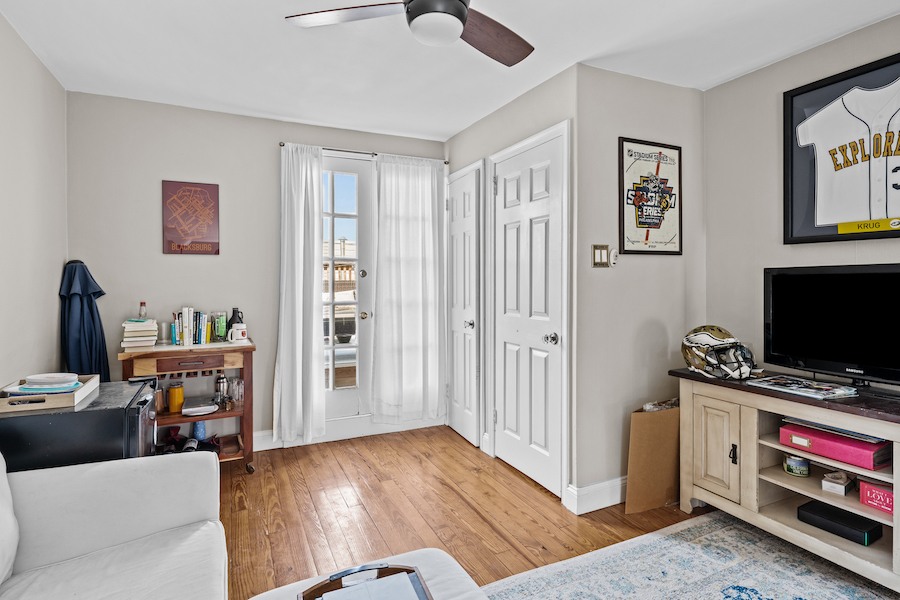 The listing agent also notes that this space has functioned in the past as a second living room and a yoga studio, so clearly, this top-floor room will be whatever you make of it. 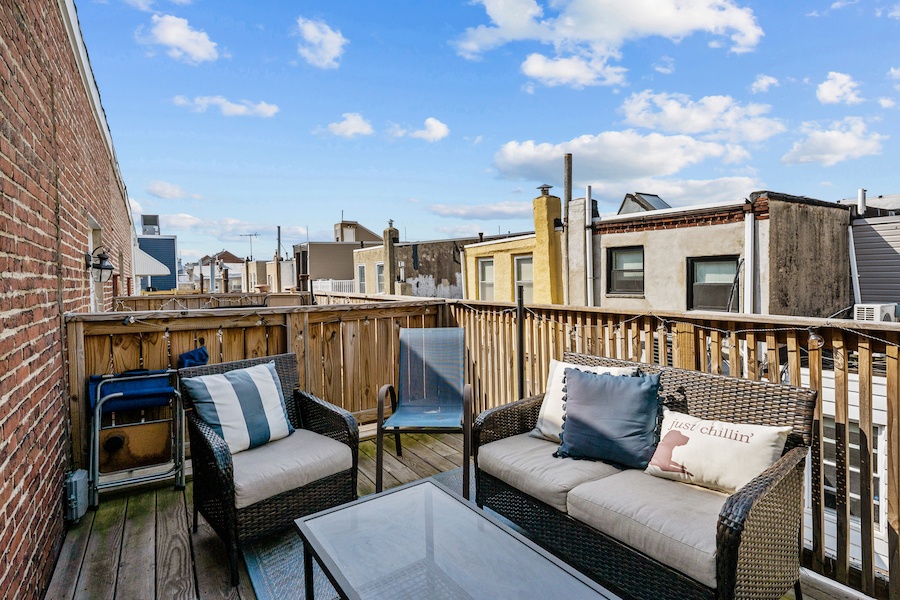 French doors at its rear open onto an attractive private deck, the second outdoor space. Below all this, the basement contains the laundry and storage space.

And when you want to get out of the house, you will find plenty of places to go and things to do around you. Cianfrani Park, Palumbo Playground, the Italian Market and South Street (where you will find two supermarkets at 10th Street) are all just a few blocks away, and you can also walk from here to Washington Square West, the Gayborhood and the Avenue of the Arts.  SEPTA bus routes on Seventh, Eighth, Ninth, Lombard and South streets can take you to those places beyond walking distance, as can the Broad Street Line at Lombard-South station, a little more than seven blocks away.