This mid-17th-century trinity has a bodyguard of two 19th-century trinities flanking it. Its owner since the 1970s has turned the trio into one truly singular residence. 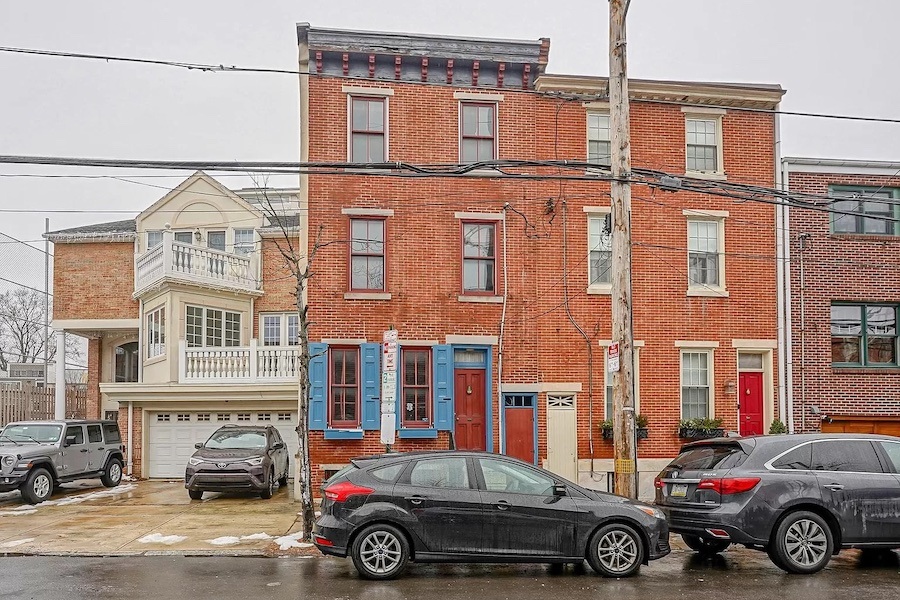 Behind this 1890 facade on Front Street in Queen Village lies a house that’s a trinity sandwich: two 1890 trinities for the bread and a mid-1600s one — old enough to date to the days of New Sweden — as the meat in the middle. You’ll find it at 910 S. Front St., Philadelphia, PA 19147 | Bright MLS images via Rosedale Real Estate LLC

We do have a glimpse into the 18th century that survives intact: Elfreth’s Alley in Old City, the nation’s oldest continuously occupied residential street.

But I must confess that I wonder what 17th-century Philadelphia might have looked like. Granted, the town existed for only 18 years in that century, but that was long enough for it to be laid out according to Thomas Holme’s plan for it and a bunch of houses to be built.

Wait, I’m forgetting something. Before William Penn, there were the Swedes, who settled this area as part of the colony of New Sweden starting at Upland, now Chester, in the 1640s.

New Sweden stretched up the Delaware River as far as present-day Society Hill and included the area the Lenape called Wicaco (now Weccacoe). The most prominent remnant of the Swedish colony in the city is Gloria Dei (Old Swedes’) Church at Queen Village’s southeast corner. Its current home, however, dates to 1701, after New Sweden, which had passed into the hands of the Dutch, became part of William Penn’s new British colony in 1682.

Even though Wicaco, later Southwark, got renamed for the Swedes’ queen at the time, Christina, no physical evidence of the Swedish settlement remains standing.  Except maybe the middle of this Queen Village triple trinity house for sale.

According to the listing agent’s copy, the middle section of this three-part trinity dates to “the mid-1600s.” If true, that would mean that it was quite likely built by the Swedish colonists. That trinity, however, got flanked by two more on either side of it around 1890.

The three structures sit on an unusually deep lot, which allowed the owners who bought the trio in the 1970s to add a wing to their rear in 1990.

In the course of their stewardship, they turned the trio into a singular Colonial sensation, filled with fireplaces, built-in cabinets, built-in shelves and all sorts of nooks and crannies. 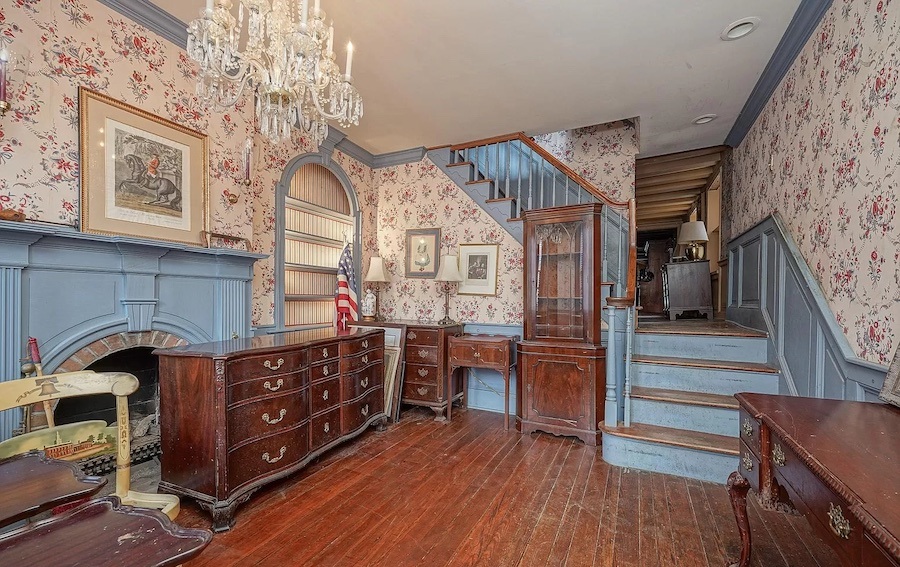 The living room sets the tone for the house. At its rear you find the first of this house’s three staircases. (Should disaster strike, one thing you won’t have to worry about is finding a way out of the house.) 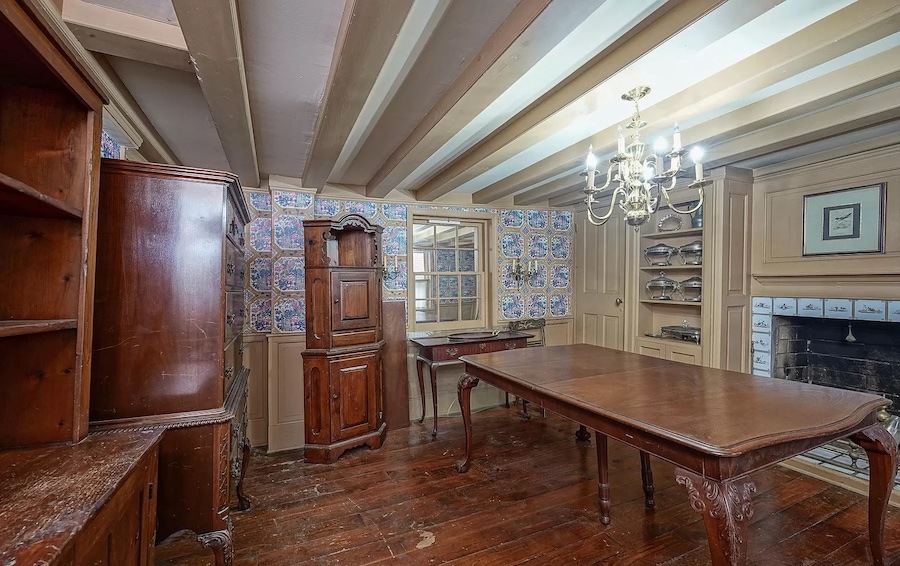 The first four steps of that staircase take you to the level of the rest of the main floor. A doorway leads from those stairs to the dining room, which is part of that mid-1600s trinity. All of the rooms in this section of the house have beamed ceilings. This room’s fireplace looks too small to have served as its kitchen, however; perhaps there was a kitchen ell in the back. Behind the door next to the built-in shelves next to the fireplace is the original trinity staircase. 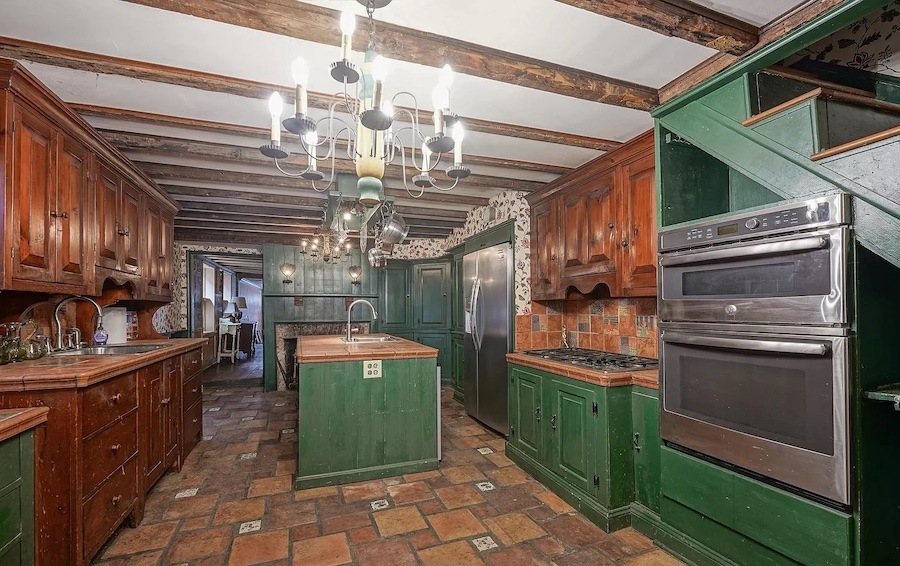 If there was a kitchen ell, it would have occupied the site of the present-day kitchen, the main floor of the other 1890 trinity. You will note that it, too, has a fireplace and stairs leading to the upper floors. It also has a beamed ceiling, cabinets that were built to last, and a full complement of modern stainless-steel appliances. 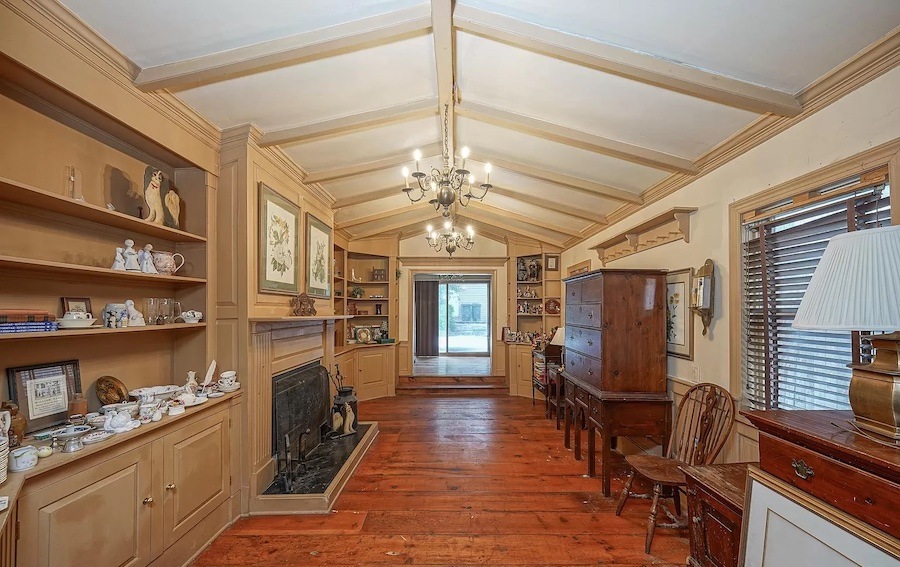 Behind the kitchen is the family room, added in 1990. 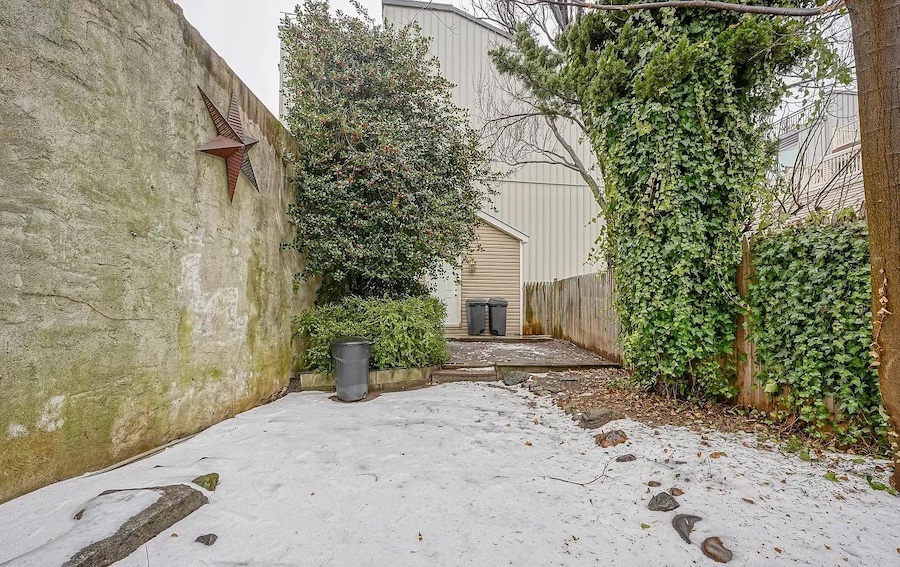 It also has a fireplace as well as a vaulted ceiling and a sliding glass door at the back leading to the ample backyard. The listing agent notes that this yard is “the size of most South Philly homes.” That may be a slight exaggeration, but it’s certainly large enough to hold yet one more trinity at least. It has a storage shed in back, and a passageway along the side of the house connects it to a doorway leading to the street that offers emergency egress.

The original middle trinity serves as a sitting area or stair hall for the trinities that flank it, but the front structure also has its own stair hall on the second floor. 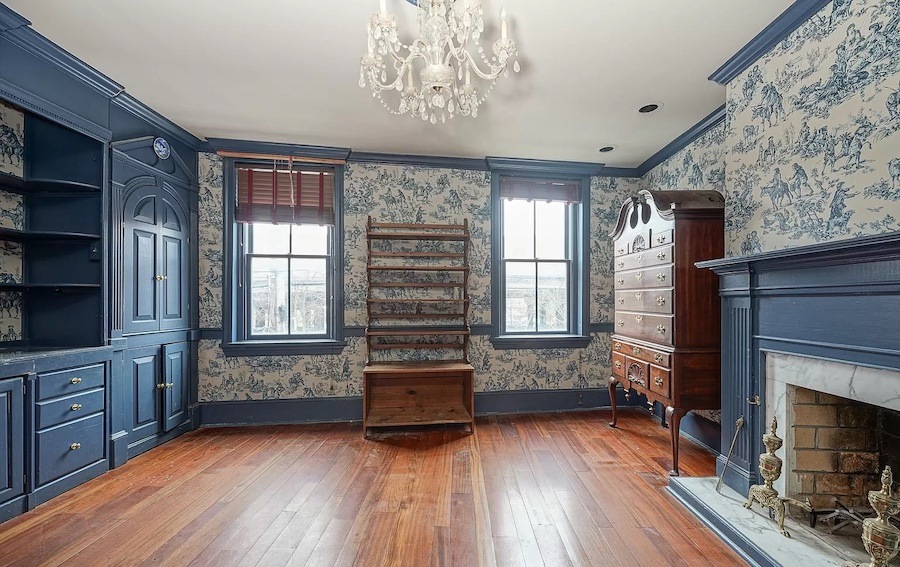 Each of the two upper floors contains a bedroom in front and back. One problem if you plan to have guests over is that all four of this house’s bathrooms are en-suite with the bedrooms. You could solve this problem by using this second-floor front bedroom as a den. It certainly has the style to serve as one. 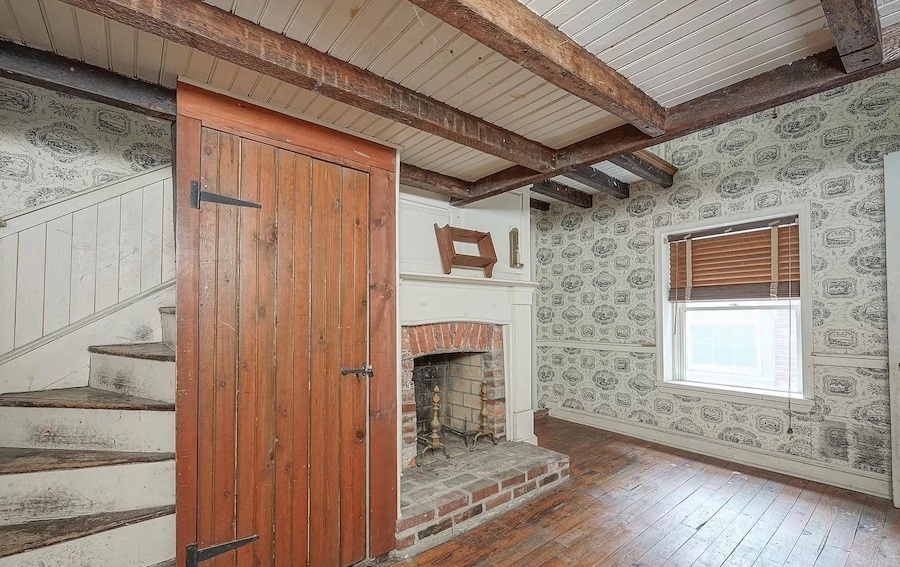 The second floor of the middle trinity can function as a sitting room. It has a fireplace and a light well open to the third floor. 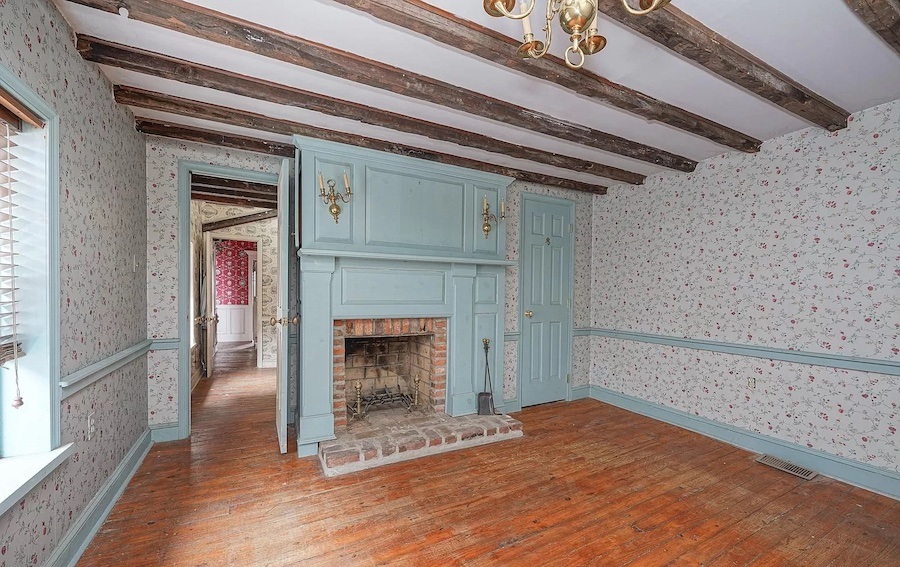 Another beamed ceiling and fireplace grace the second-floor rear bedroom. 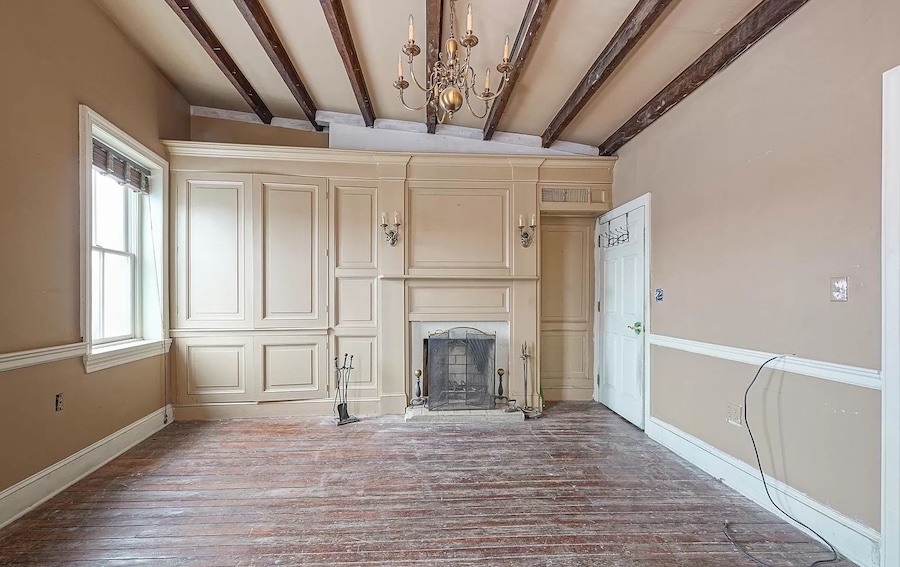 Ditto the top-floor front bedroom, which also has built-ins, a vaulted beamed ceiling and a large walk-in closet. That may well make this one the primary bedroom. 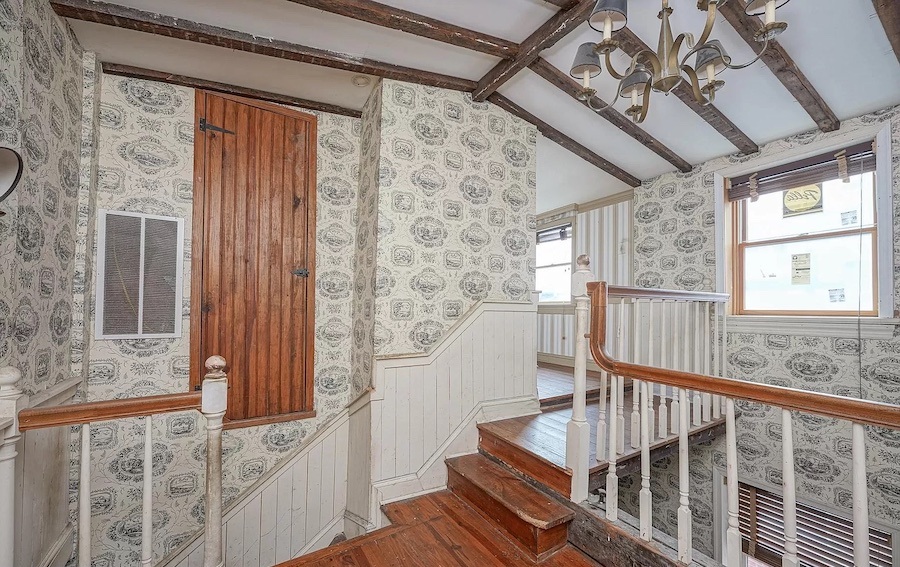 And this is what the original trinity’s top floor looks like. Given the presence of a large intake vent to the left of that door above the stairwell, I’m going to guess that the door leads to a mechanical closet that houses the climate control system. 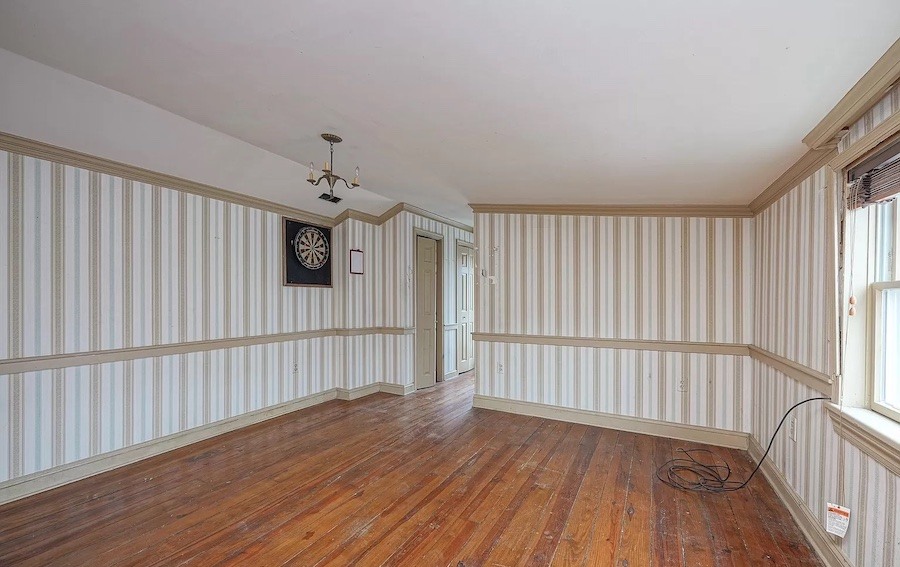 The rear third-floor bedroom is the plainest, but it also looks like it’s the largest. 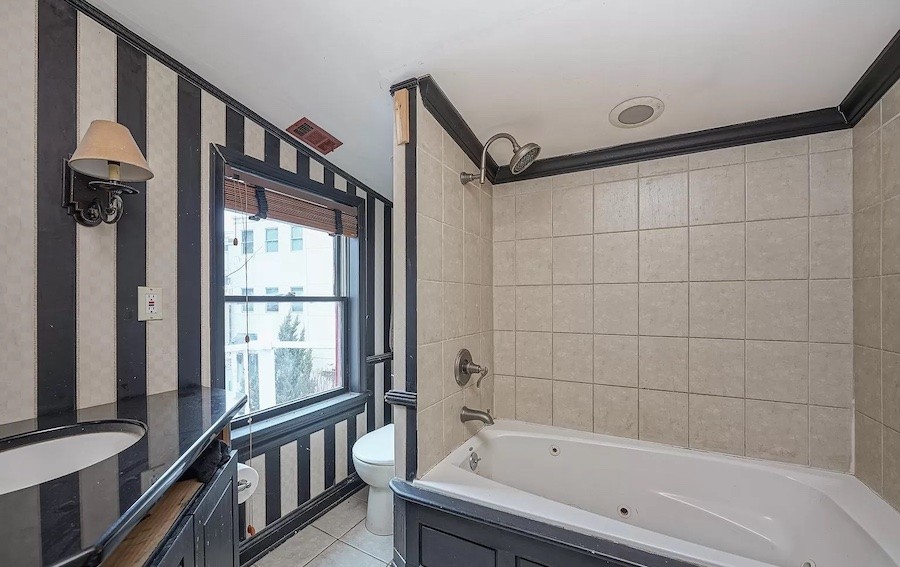 In addition to a vaulted ceiling and an en-suite bath, it also has its own private balcony, so even though it lacks a fireplace, you might want to use it as the primary bedroom instead.

Something else that suggests that the heart of this Queen Village triple trinity house for sale is a Swedish remnant: its location. Old Swedes’ Church sits one block to its east, and Shot Tower Playground takes up the south end of its block, just past the more-money-than-taste newer rowhouse immediately to this one’s south. This means you also have easy access to South Street, the Delaware waterfront, and (via the Route 25 bus on Columbus Boulevard) a more recent Swedish import to America: Ikea.

I doubt, however, that you will be frequenting Ikea in order to furnish this house. Its style, after all, points 180 degrees away from Ikea’s Scandinavian modern. However, you will probably want to stop by the Home Depot at Pier 70, just up Columbus Boulevard from that Ikea, to buy things like sandpaper, paint and varnish to refinish its hardwood floors and touch up some of the painted banisters.

The owners hope that whoever buys this house will show it the same love they did in turning it into a Colonial showpiece. I don’t think that will be much of a problem at all.

OTHER STUFF: This house’s sale price was reduced by $26,000 on March 3rd. And finally, a warning for the listing agent: Your agency needs to do some repair work on its website’s back end. Clicking on the listing thumbnail returns a critical error message and a link to this page about debugging in WordPress.