On the Market: Big House on Small(ish) Lot Outside Pottstown

Want to live in a grand estate but don’t have what it takes to afford one of those? Try this extra-large house on a not-so-large lot on for (super)size. 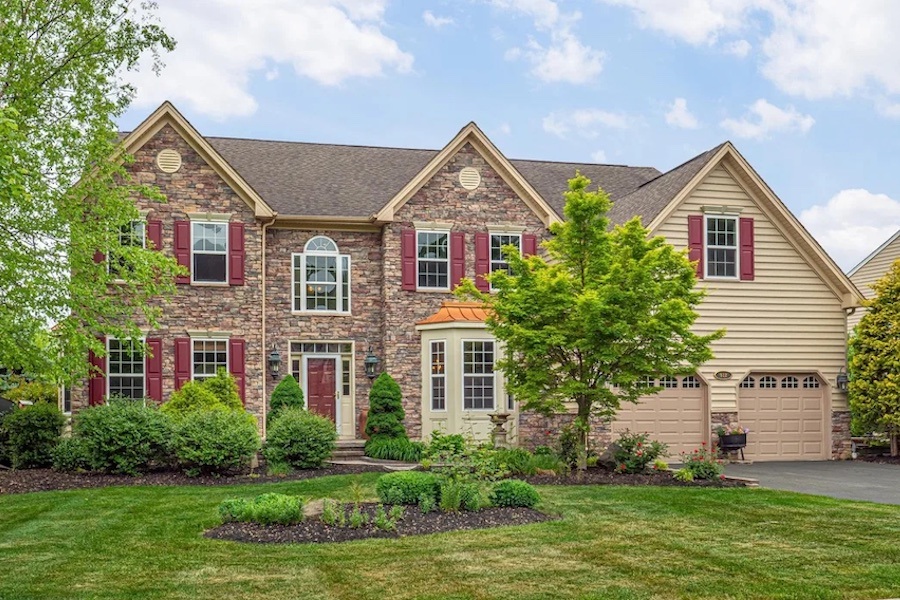 Behind this relatively compact facade you will find a house that’s big as all indoors inside. On the outside, that’s not the case, but the lake behind your house makes up somewhat for the modest lot at 912 Nottingham Rd., Pottstown, Pa. 19465 | Bright MLS images via Keller Williams Greater West Chester

The neotraditional house you see above is located in a subdivision that surrounds a lake in North Coventry Township, Chester County, just across the Schuylkill River from Pottstown.

Its location within the subdivision is marked with a pin in the photo below. The photo itself depicts the worst nightmare of just about every resident of Brandywine country. 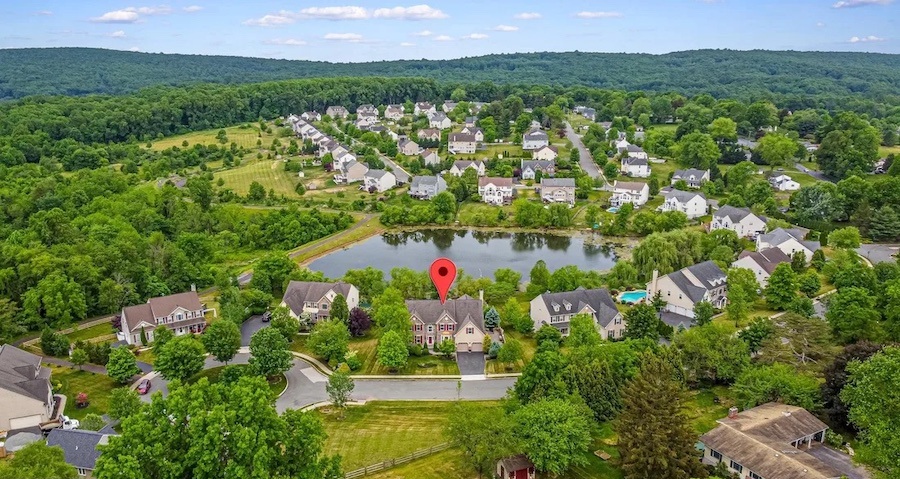 Those residents should perhaps be thankful someone built something like this up in Chester County’s northern reaches, well away from them. For if they want to preserve the open fields across which George Washington’s troops marched, and as long as there are people who still want to live in large “country estates” in places like Brandywine country, someone is going to have to build subdivisions like this one somewhere and pack those estate houses in cheek-by-jowl in order to save that open space.

This article is not the place to debate the wisdom of all this. Its main concern is showing off this North Coventry neotraditional house for sale.

As both that aerial photo and this one of the house and its backyard should make clear, the tradeoff one makes to put houses like this one within the reach of those with relatively modest budgets is to either shrink the house or shrink the lot.

Here, the builder chose to shrink the lot — it’s less than half an acre. And as compensation, the builder put tons of space into the house. 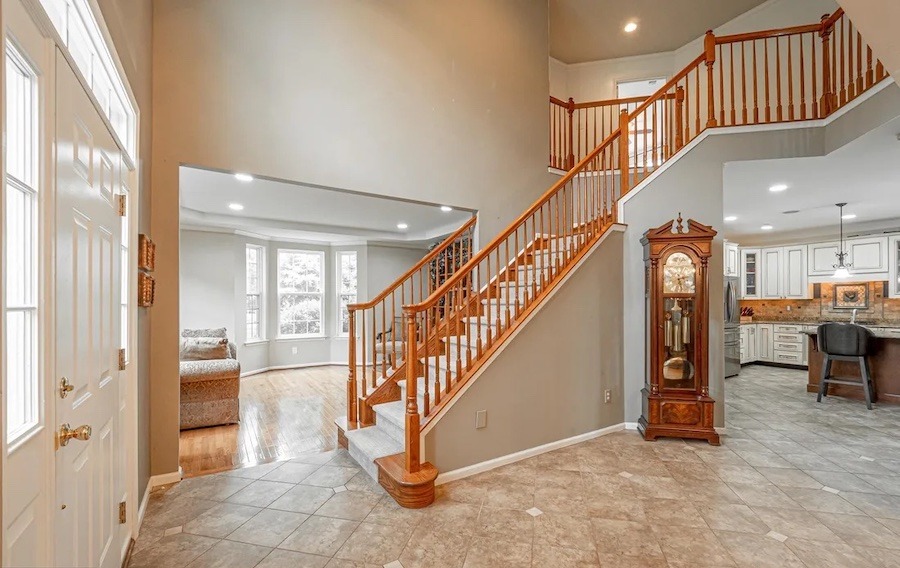 The front of the main floor has the spatial arrangement of the modern center-hall Colonial: A two-story foyer flanked by a living room on one side and a formal dining room on the other. 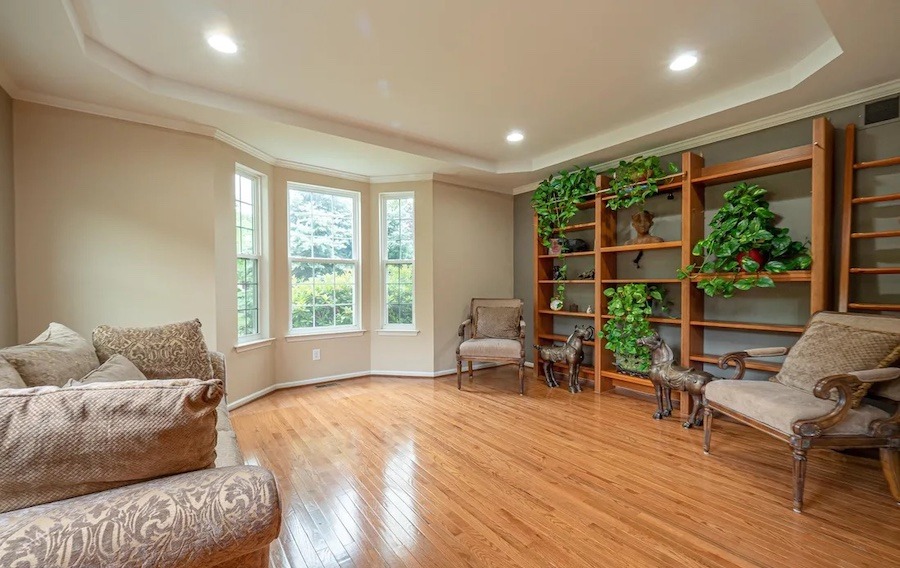 The living room has built-in bookshelves with room for a big-screen TV. And if, like the owner of this house, you’re neither bookish nor inclined to want to watch TV in the formal living room, then you could do far worse than to decorate this room as you see it here. 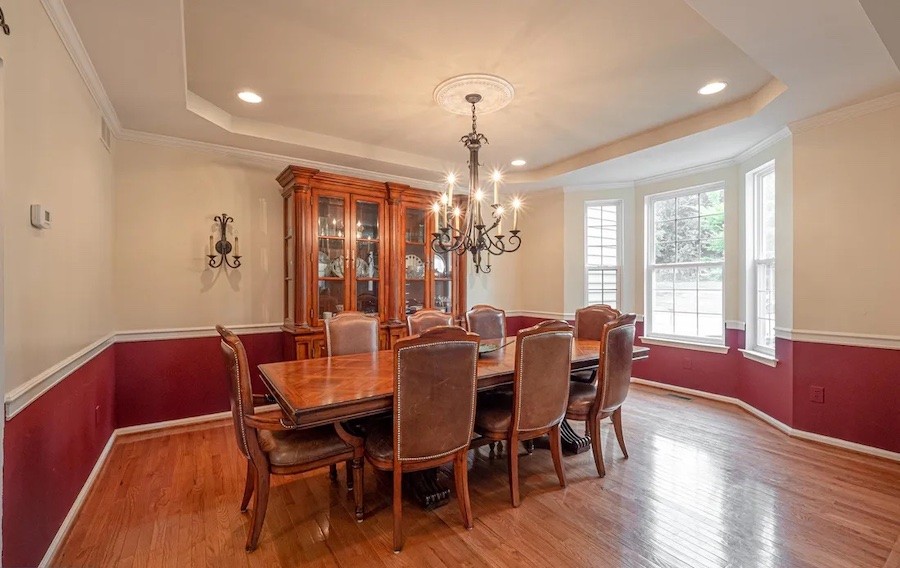 The dining room has such Colonial staples as a chair rail, medallion-mounted chandelier and two-tone paint scheme. It also has a tray ceiling, a more modern invention. 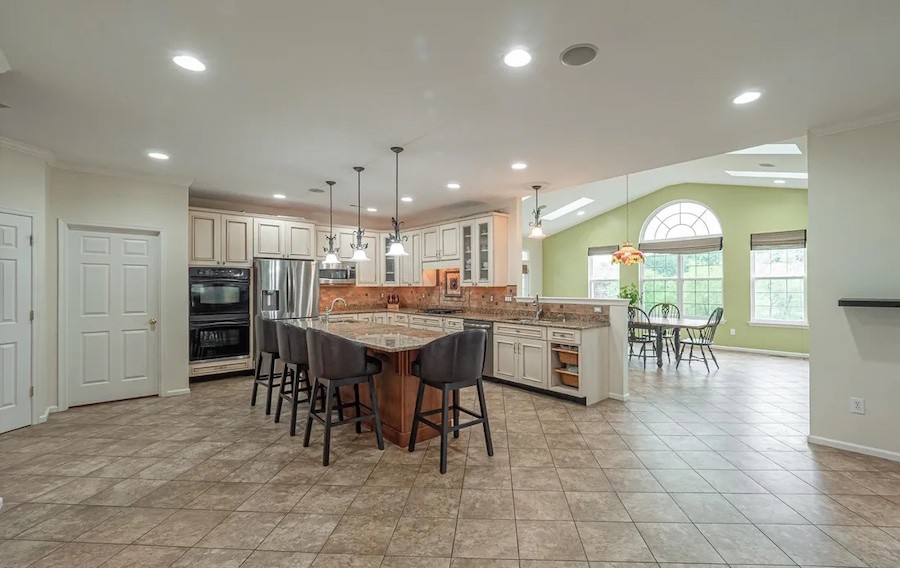 A butler’s pantry connects the formal dining room to the kitchen and morning room. This photo should give you a sense of the ways this house is swimming in space. 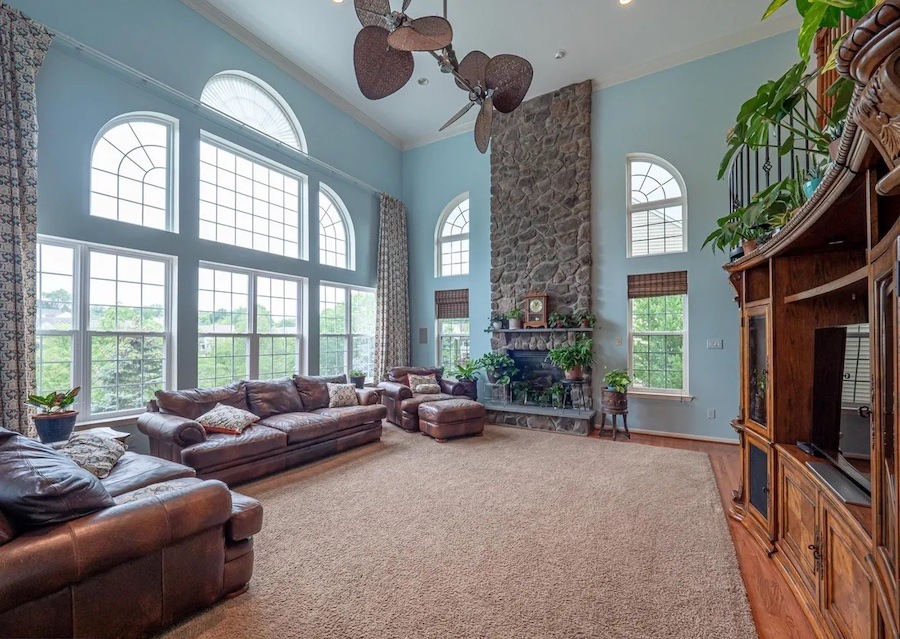 Between the kitchen, the formal dining room, the skylit morning room behind the kitchen, and the two-story-high family room adjacent to the kitchen, one could entertain and feed a sizable crowd. It’s a shame, then, that some of that space in the kitchen wasn’t given over to, say, a bigger cooktop, an additional oven, a second dishwasher, or perhaps all three. At least it has plenty of counter space, two sinks, and top-quality appliances.

The main floor also has an in-law suite with an en-suite bath and access to the deck off the morning room. 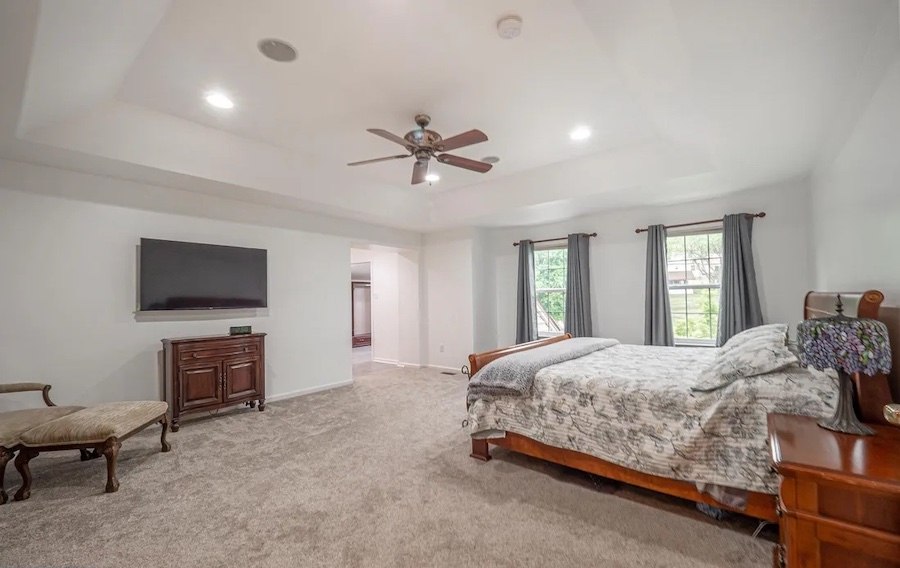 The second-floor primary suite is also as big as all indoors. Its bedroom has a tray ceiling, and it has a walk-in closet as large as some bedrooms. 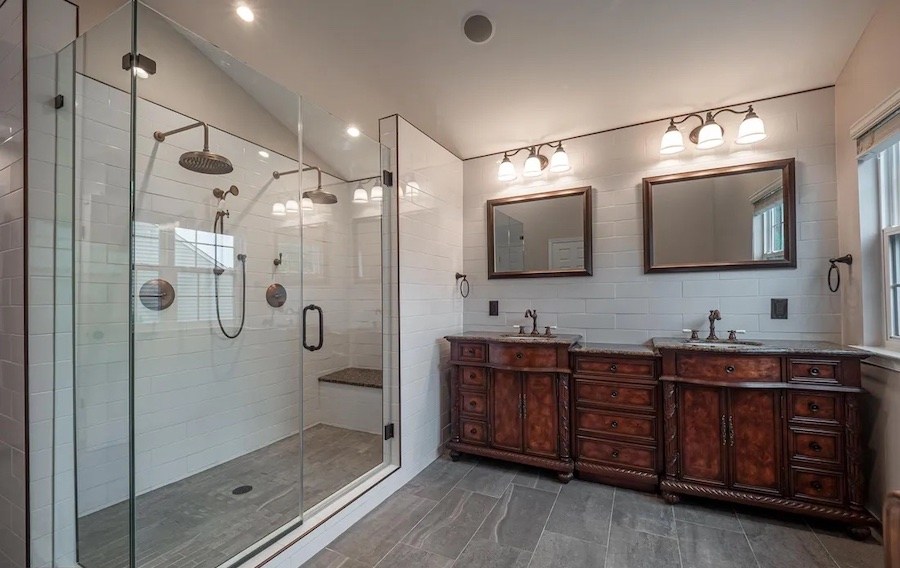 Its bathroom has not only a vaulted ceiling and dual vanities but also a shower stall large enough to accommodate two people at the same time. And it has a clawfoot soaking tub, too. Two of the other three bedrooms on this floor share a Jack and Jill bath, and a hall bath accommodates whoever sleeps in bedroom number five. 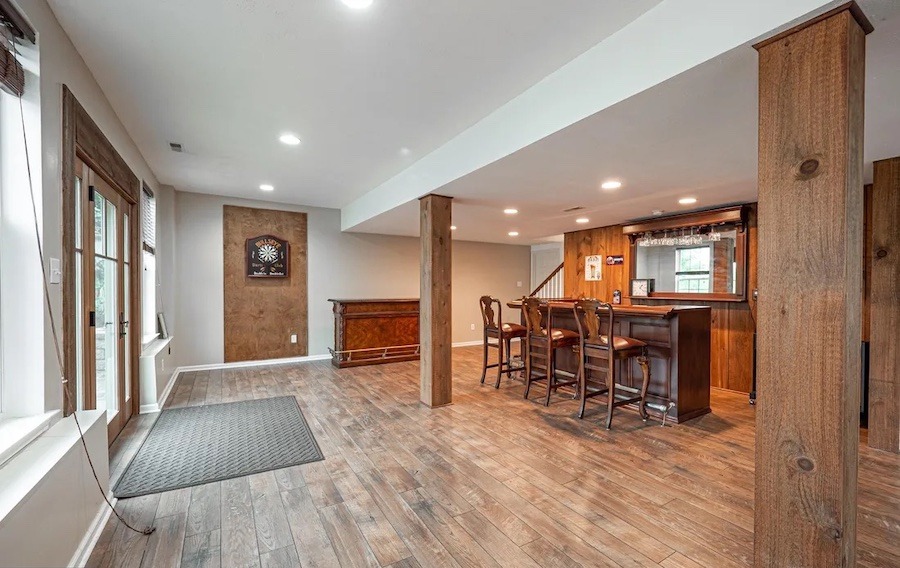 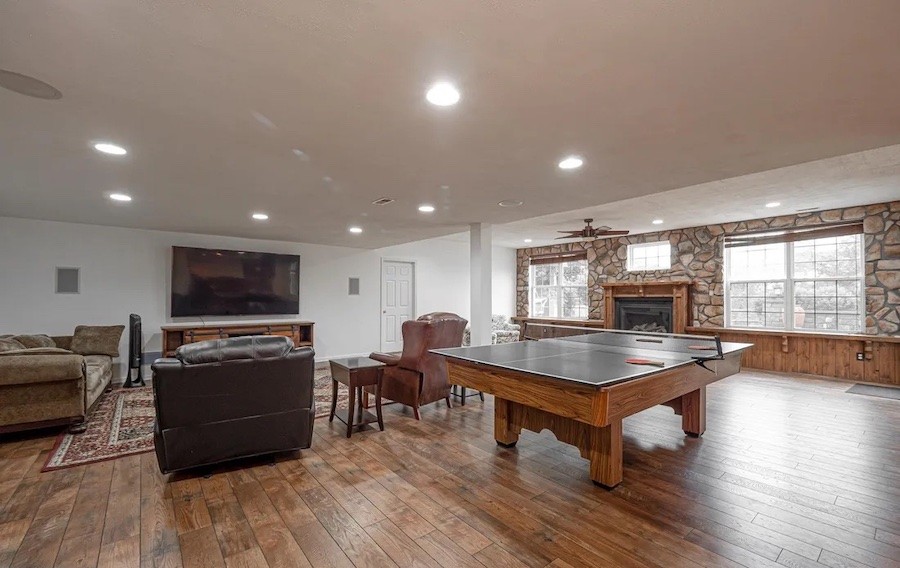 And there’s even more space in the walkout basement. Down below you will find a large open space with a bar, a game area, a fireplace and a media lounge. The basement also houses a gym and a guest suite.

Again, a catering kitchen might have been a good idea here, but the bar does open onto the expansive rear patio, which includes a dining area with room for a grill, a large central terrace and a fire pit. 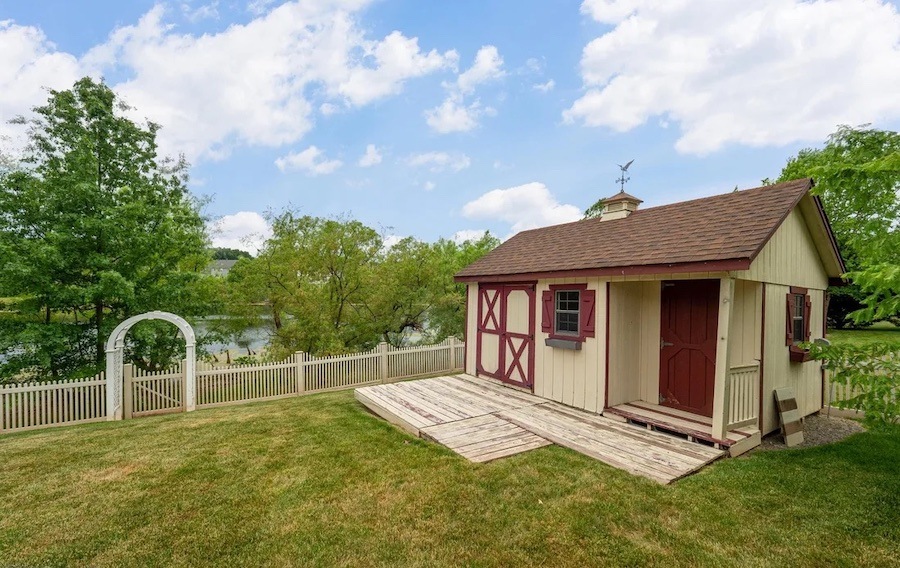 Storage shed; Coventry Lake visible through trees beyond back fence and gate

A storage shed sits near the back of the backyard. It’s big enough to store a kayak or paddle boat that you can take out onto Coventry Lake, which lies just beyond your lot’s back fence. You can also go hiking on the Coventry Lake Trail, whose head sits at the end of Nottingham Road, just down from this house.

The Coventry Lake subdivision lies a short drive away from Pottstown Pike (Route 100), which offers quick access to  Pottstown and Route 422. That latter highway will get you to Valley Forge and King of Prussia, and Route 100 also connects with Route 202 for access to West Chester jobs in Brandywine country. Shopping and dining can be found both in downtown Pottstown and in Exton around the Pennsylvania Turnpike interchange about a 20-minute drive south from here.

And you may be pleased to know that there’s protected open space close to this North Coventry neotraditional house for sale as well. You may even be able to see some of that open space beyond the houses of your subdivision. At least some of this countryside, then, will remain countryside unmolested by developers building big houses on modest lots.