Like just about all of its neighbors, this brand-new house replaced a more modest one. This one has more room to accommodate guests and more room for each guest — and yourself as well. 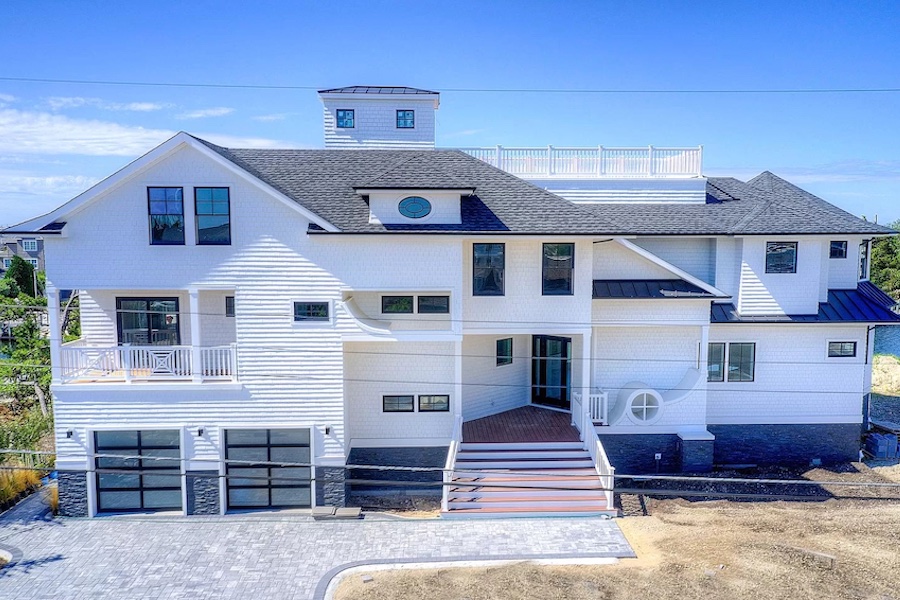 Most of the Jersey Shore houses we feature are located in the shore’s southern reaches: Absecon, Ludlum and Seven Mile islands, Ocean City, the Wildwoods and Cape May.

But some Philadelphians march to the beat of a different drummer and head to Long Beach Island instead. This barrier island in Ocean County is the overlap zone between the New York and Philadelphia parts of the Shore.

The narrow island, which tends to get whacked when major storms hit the Jersey coast, consists of a string of communities stretching from Barnegat Light in the north to Surf City in the south, with land access consisting of a single causeway that lands in the island’s middle. The communities on LBI tend to be quieter and more laid back than those on the islands to its north and south, and those qualities make them popular with a certain rather affluent segment of the area populace.

As this magazine put it in a 1970s feature on the island, “The haves turn right and the have-mores turn left” once off the causeway. To the right is the more densely built part of the island, including most of its business districts. This brand-new house is located in Loveladies, a waterside community that lies almost as far as you can go up the island once you turn left.

Apparently, there’s plenty of money to burn among the have-mores who summer on LBI’s northern reaches, for this lagoonside Loveladies new construction house for sale is one of at least three that have replaced older houses at the end of its street.

Here’s what the tip of Nautilus Drive looked like about two years ago: 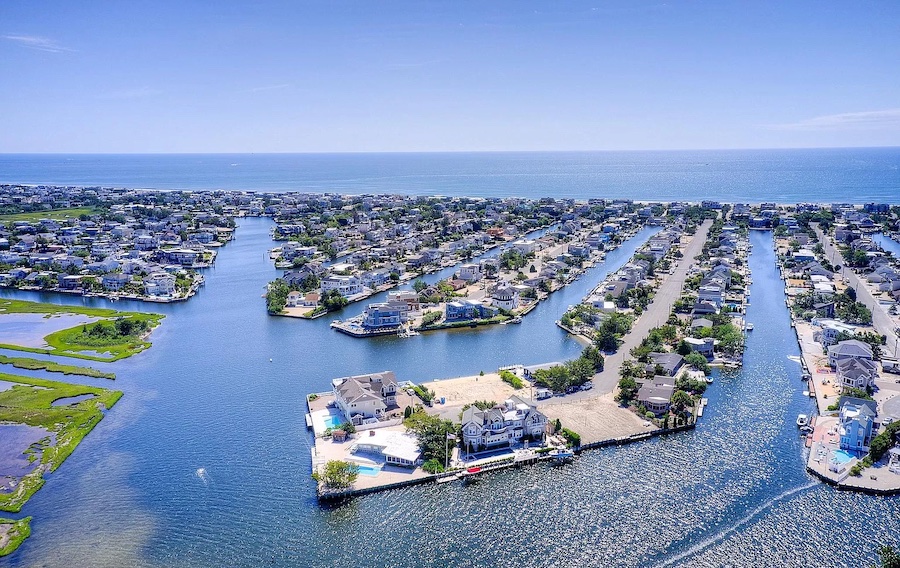 And here it is now, with this house identified by a red arrow. 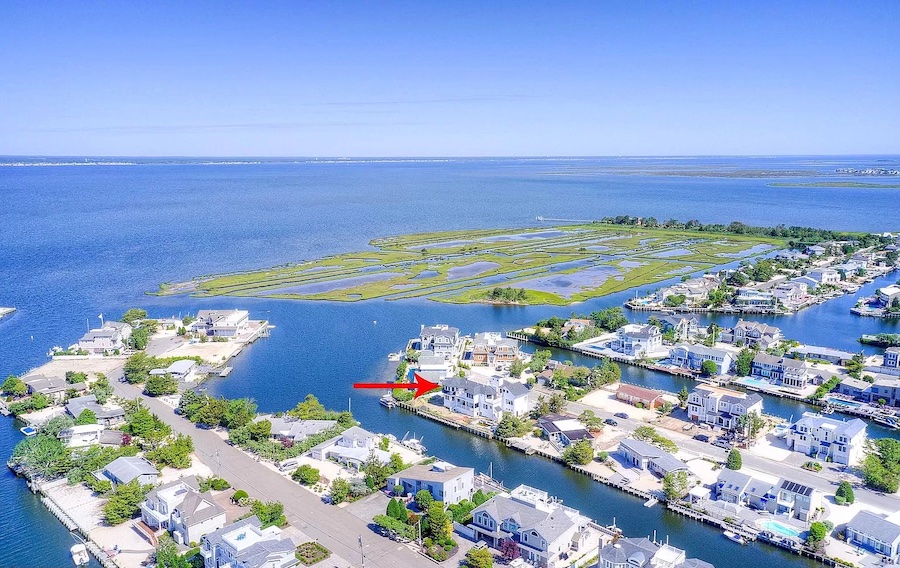 Nautilus Drive in 2021, with new houses on all three lots

The two empty lots next to and across from it now sprout houses, and this house replaces a more modest contemporary house on this site.

Clearly, there’s a space race going on in Loveladies, for just from the looks of it, this neotraditional house has almost twice as much space as the contemporary house it replaced.

Designed by Studio Tagland, this house channels the traditional Jersey Shore vernacular house style, but does so in a rather postmodern way. It also puts it on steroids, as most neotraditional Shore houses do now. It’s built to accommodate a sizable crowd, with six spacious bedrooms and even larger common spaces.

Both the open main-floor living area and the primary bedroom are located in a circular turret that looks out on the entrance to this lagoon. 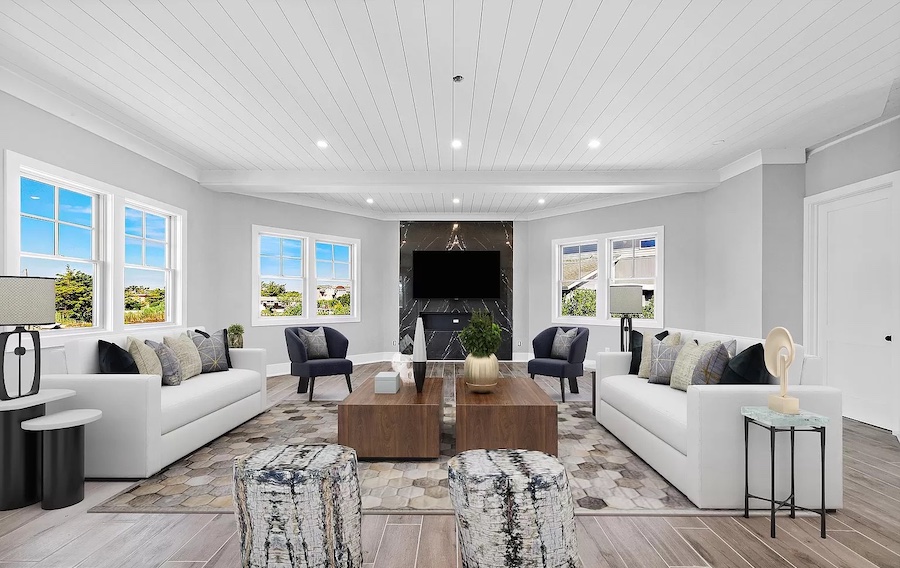 Both have plenty of windows that look out on the water and let in lots of light. 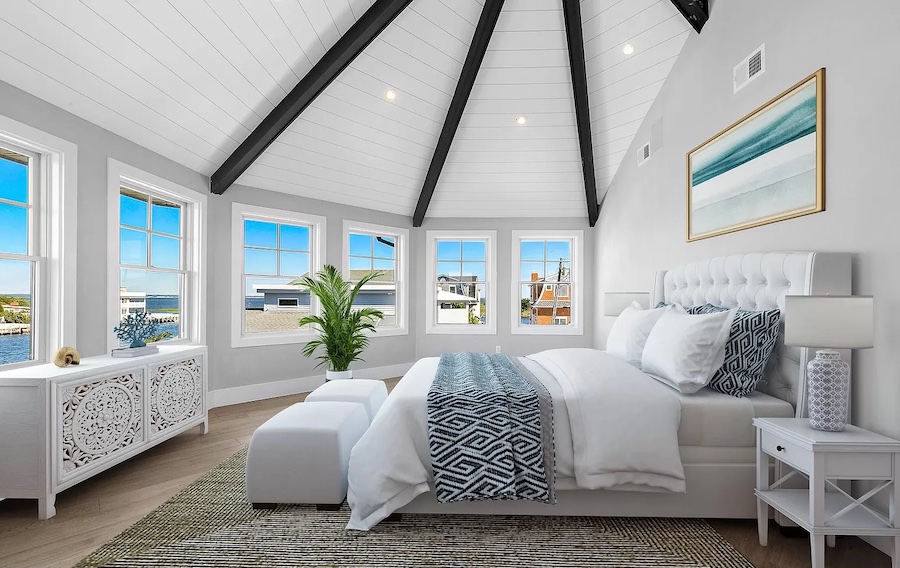 And both have their share of bling: there’s a marble fireplace in the living room and a beamed vaulted ceiling in the primary bedroom. 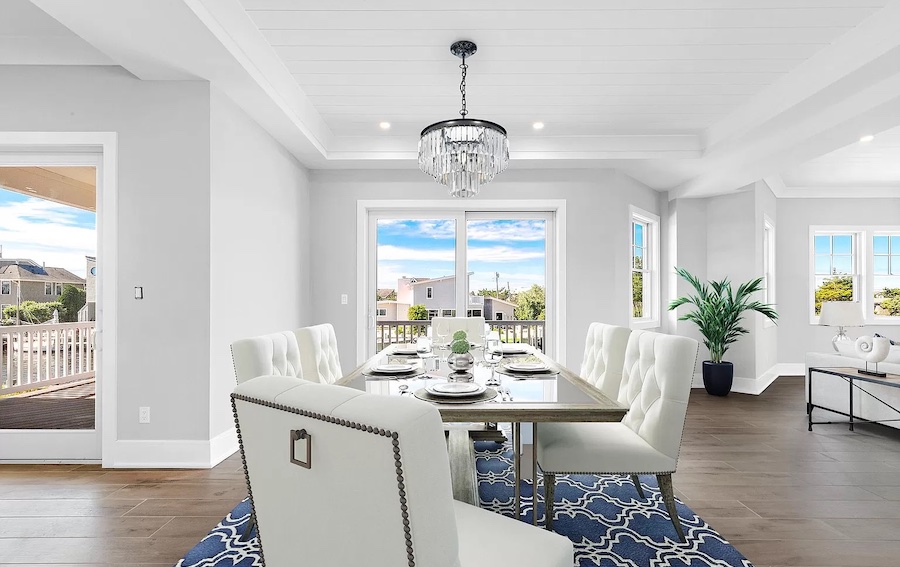 Sliding doors from the dining area lead onto a deck next to the lagoon. You’ll also find a saltwater gunite pool and outdoor kitchen once you step outside. 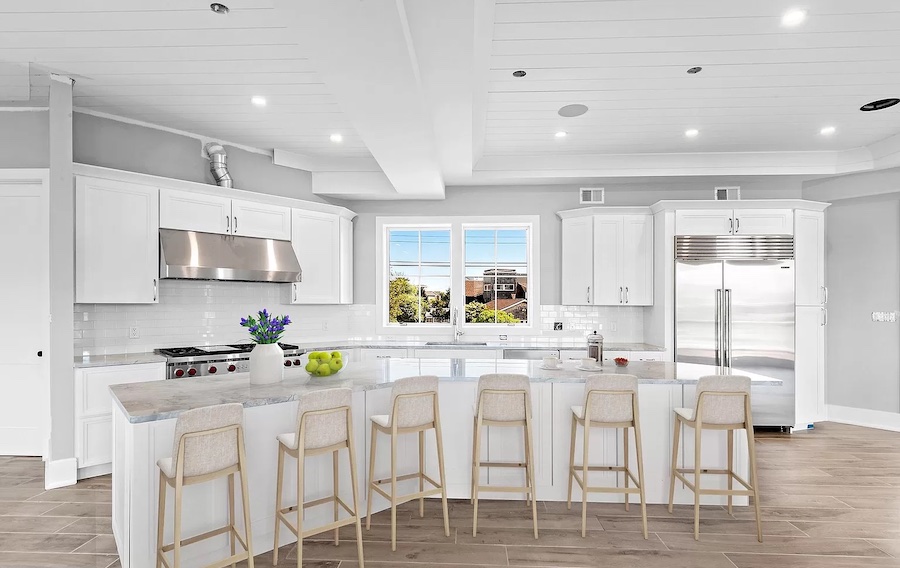 The kitchen, next to the dining area, boasts a full complement of top-drawer appliances, plenty of marble-topped counter space, and ample bar seating at its island. 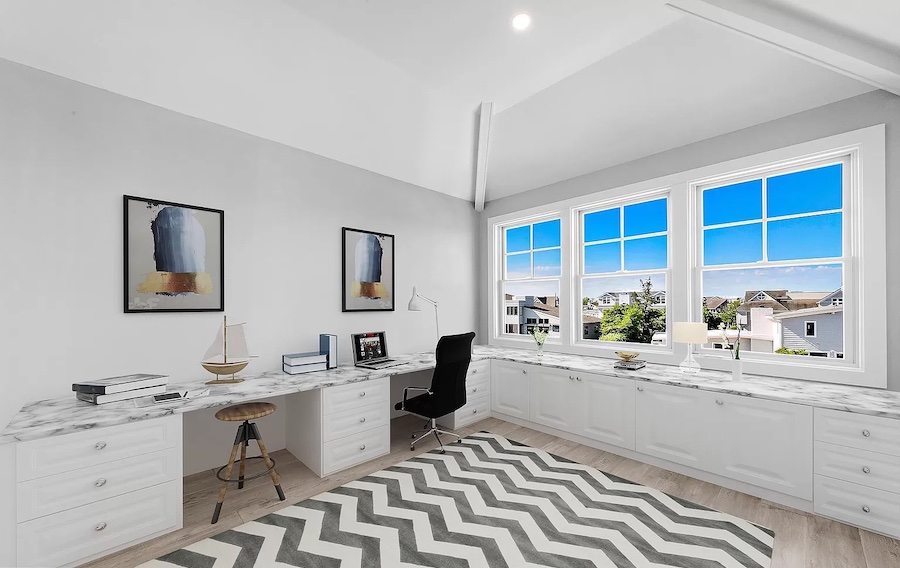 And speaking of workspace, of course it has lots of home-office space for working from home. 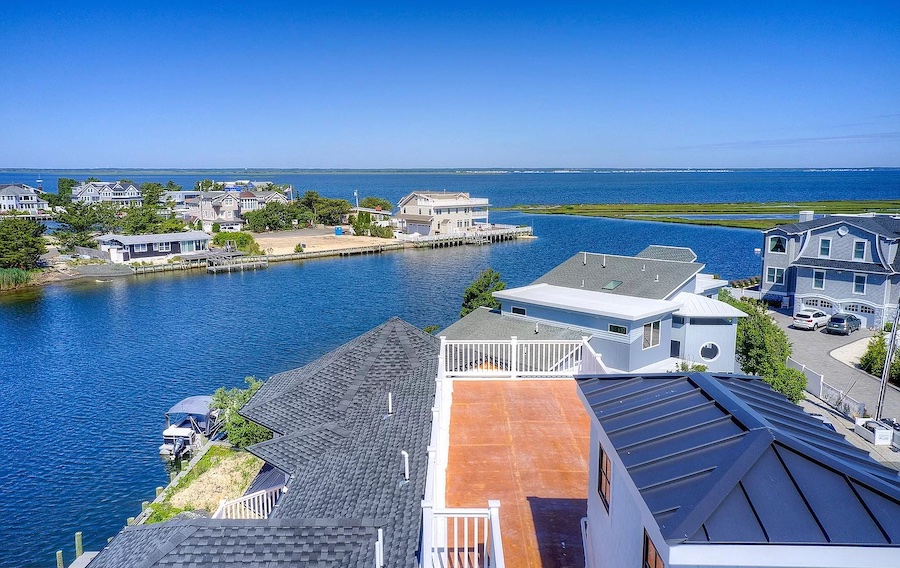 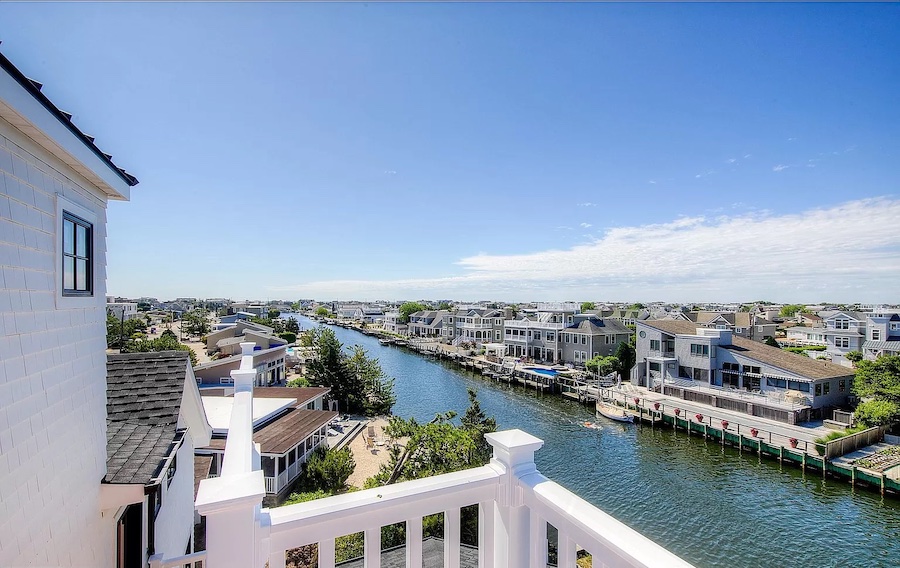 View of lagoon from roof deck

It also has a roof deck with a panoramic view of the surrounding development, lagoons, marshes and bay.

If you have lots of relatives and friends, they will all welcome invitations to spend time at the Shore with you if you buy this lagoonside Loveladies new construction house for sale. And if they all enjoy boating, they will appreciate its 141-foot bulkhead along the lagoon, the biggest frontage on this block.

Just remember to take pictures when you come down to visit so you can keep track of the houses that come and go around you.