If it weren’t for its exterior and a concealed staircase, you would have no idea that this house is one of the oldest trinities in Philadelphia. 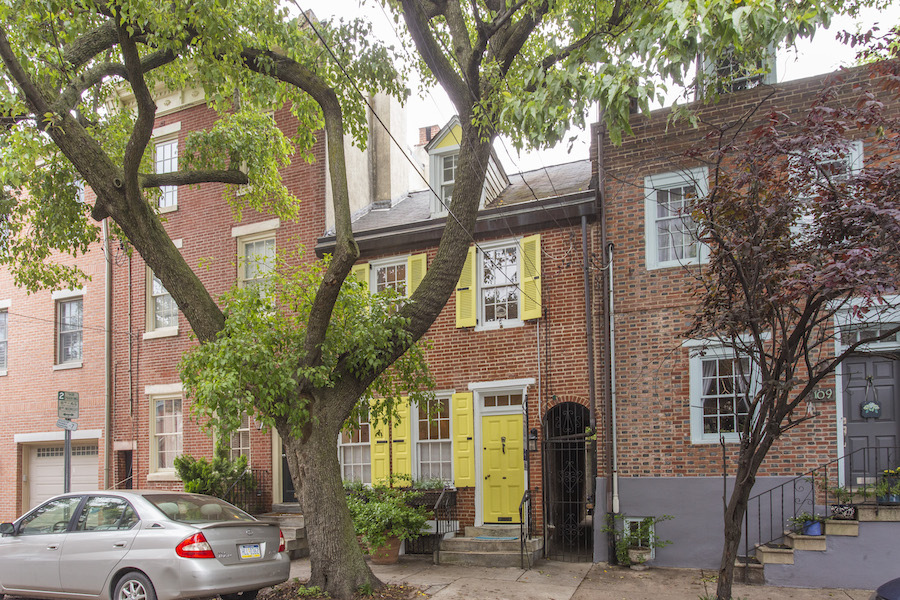 Property records trace the origins of this cute Colonial house at 111 Catharine Street, Philadelphia, Pa. 19147, to 1768. Step inside, however, and you will be forgiven for thinking that you’re about as far away from a Colonial trinity as it’s possible to get. But the clues to its origin are there if you know where to look for them. | Photos: Kiersten Ladzinski, Alcove Media, via Jesse Barnes, RE/MAX Associates

The oldest trinities in Philadelphia can be found mainly in three places:

And of those three neighborhoods, Queen Village probably has the largest number. That’s because Elfreth’s Alley is just one block and Society Hill’s easternmost blocks all got rebuilt with newer houses.

Meanwhile, the 100 blocks of the streets in Queen Village were left largely undisturbed, even as I-95 wiped out the blocks just to their east. And because they got spared, many of the small brick and wood-frame houses that lined them still stand.

Almost none of them, however, still retain their original trinity configuration. Just about all of them, like this Queen Village historic trinity house for sale, had rear wings added to them.

But many of those others still retain their Colonial-era character. Not so this house, which is probably one of the oldest such houses still standing in Queen Village.

The data in the public records state that this house was built in 1915. The Philadelphia Historical Commission and documentation in the listing agent’s possession say otherwise.

Even though it lacks the metal plaque usually found on the earliest houses placed on the city historic register, this house on Catharine Street is one of them, as it was designated historic on June 24, 1958, along with its neighbors to the east and west.

And the house itself has been around since the 1700s. The transaction history for this house stretches back to April of 1768, when baker Daniel Jones leased the lot at what is now 111 Catharine Street to carpenter Henry Butler for the annual sum of £5.

Being a carpenter, Butler did what carpenters do: He built a “two-and-a-half-story messuage” on the lot. (A “messuage” is a legalese term that refers to a house and its outbuildings on a lot.)

Butler then sold the house to a gentleman named Zacharias Nieman in October of 1768 for £39. The history from this point shows that the house changed hands on six separate occasions between then and June of 1949.

What happened to the house between then and 2002 is filed away in some leather-bound volume in the bowels of City Hall. But after a nominal transfer of title in 2002, the house changed hands twice, most recently in 2015.

And what the couple who bought it in that year did with it is nothing short of spectacular. And it also removed almost all evidence of the house’s history from the inside, with only a very few clues to its past left in place. 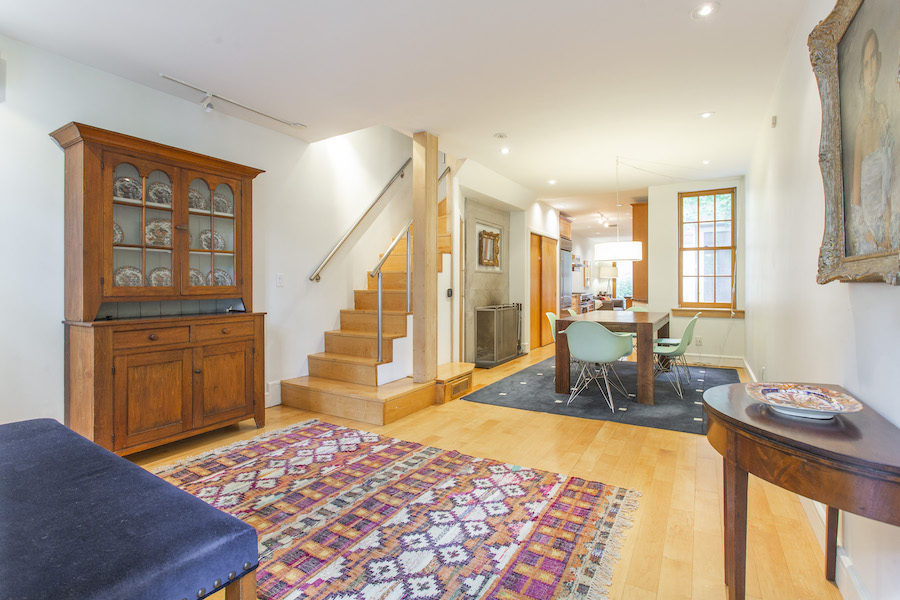 As it began life as a trinity, however, it already had one of the key elements of a modern house, namely, an open main floor. The original door and hardware, mullioned windows and fireplace remain where they were on this floor, with the fireplace getting a modern polished concrete surround. 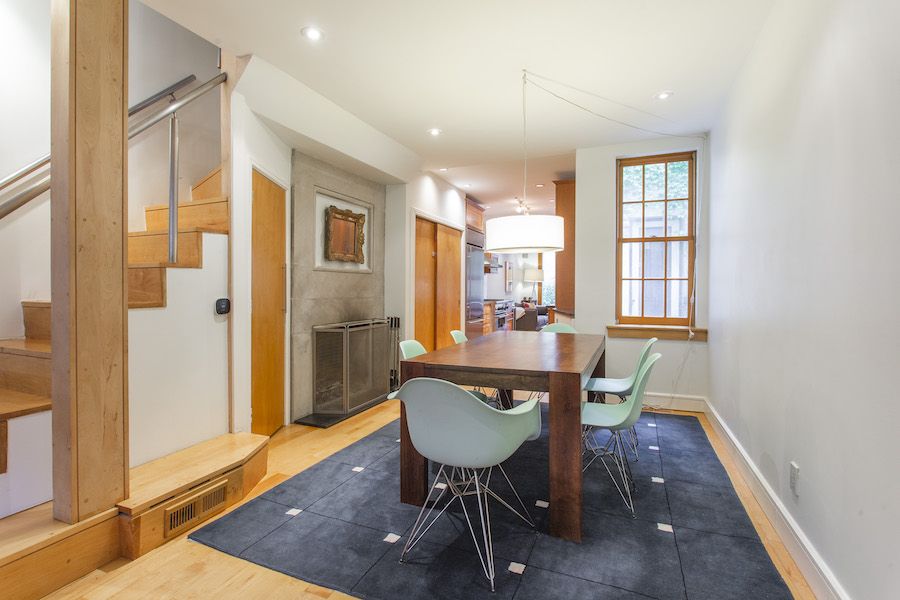 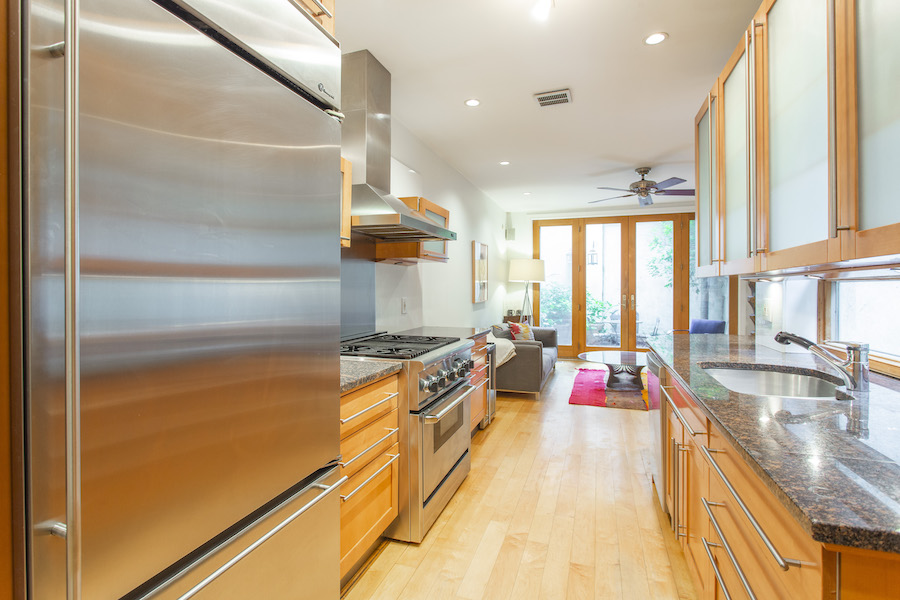 Beyond it lies the galley kitchen, a stylish affair with granite countertops and modern stainless-steel appliances. The choice of Shaker-style cabinetry makes it a bridge between past and present, while the use of frosted glass inset panels on the china cabinets give it added modern flair. 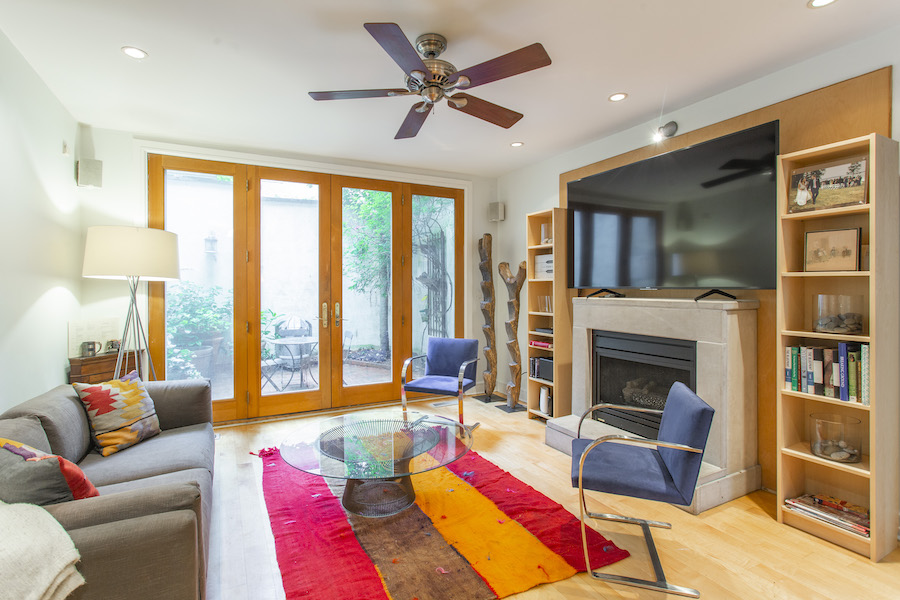 A modern glass door leads to the small side court next to the kitchen. You reach it from the living room at the rear of the main floor. It too has a fireplace, this one a modern electric one. 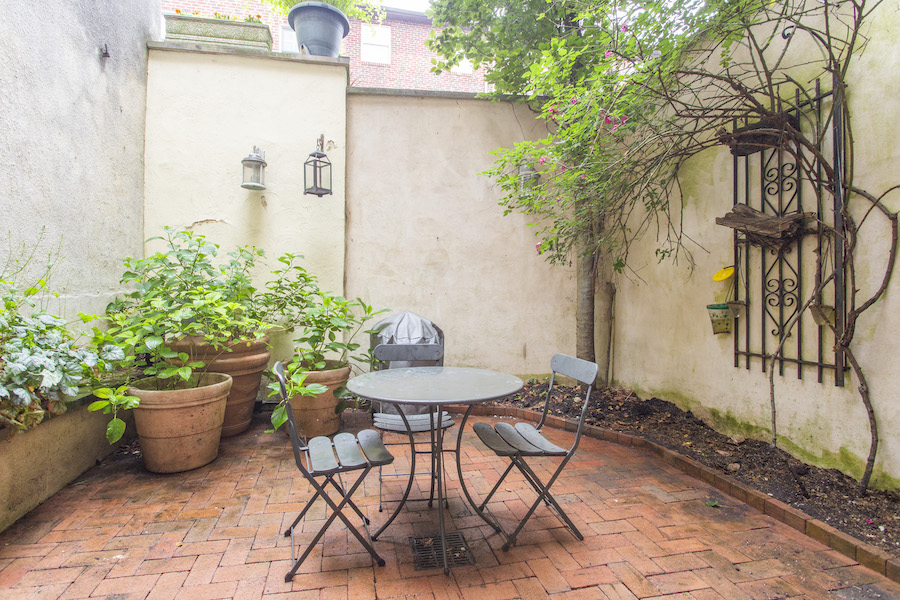 And at its rear, contemporary French doors lead to the rear patio, the second of this house’s three outdoor spaces.

The second floor contains two more fireplaces and two even bigger clues to this house’s age and origin. 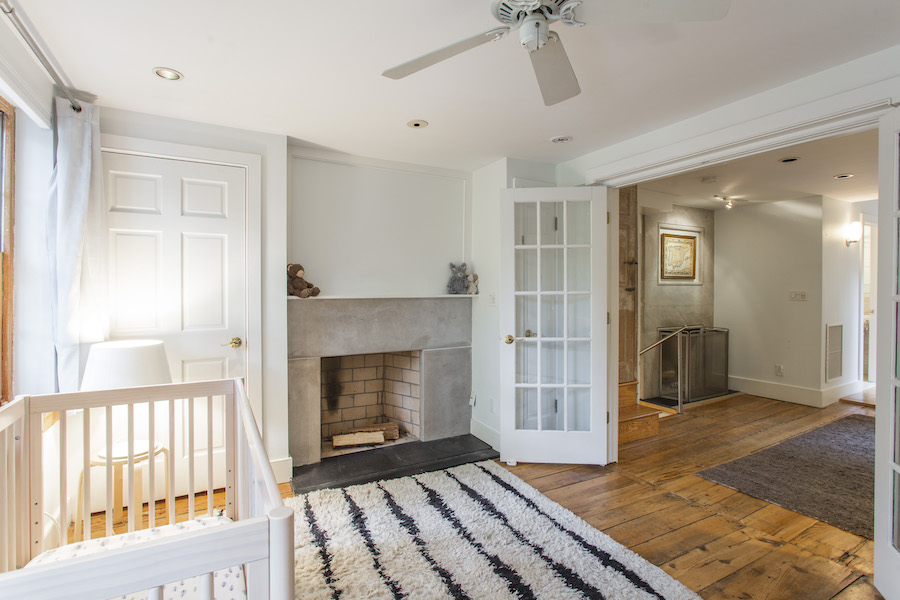 The fireplaces are located in the front bedroom and the den and library in the middle of the floor. Both of these rooms retain the original wide-plank pine floors of the trinity. 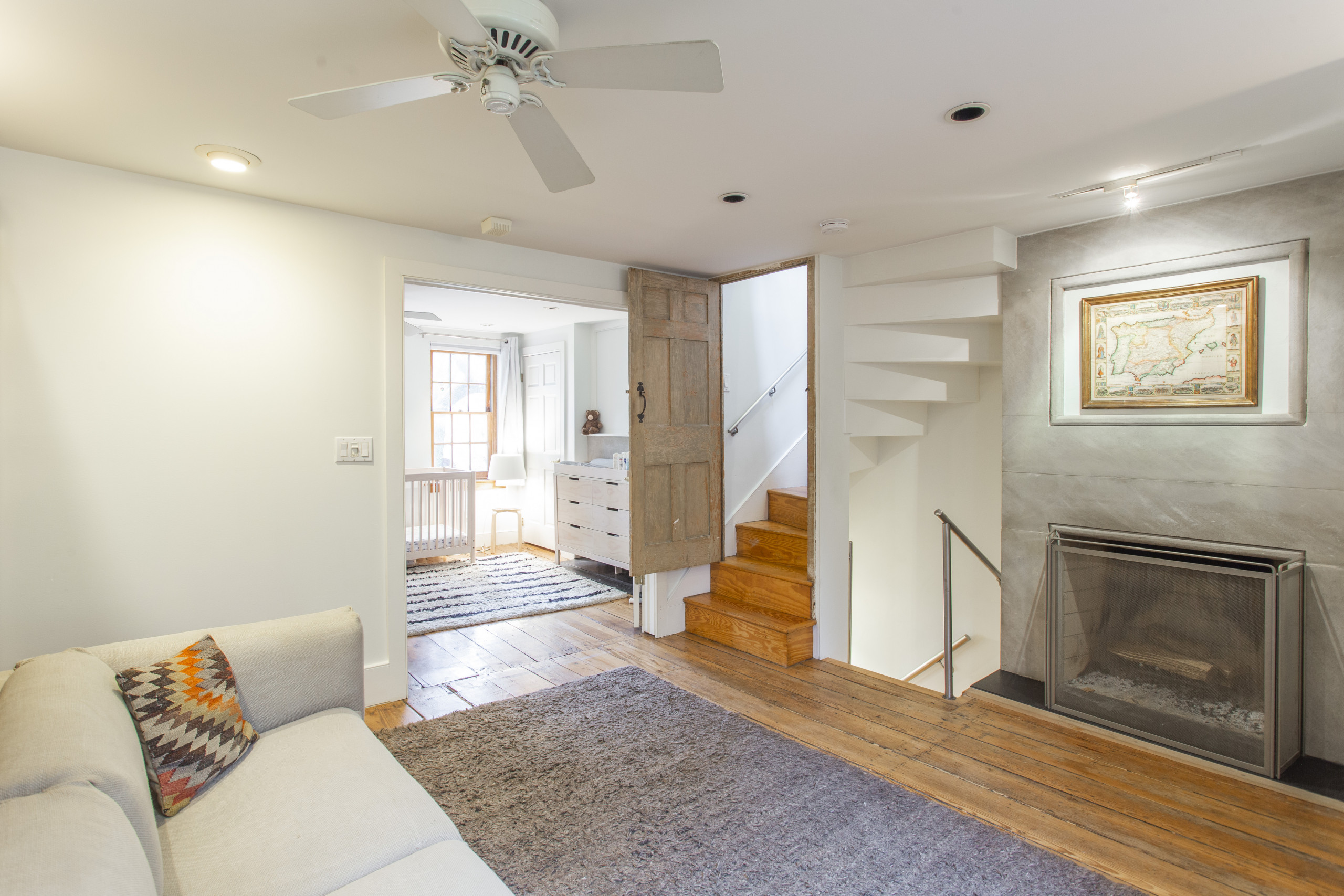 The other clue is the reason we know this house was a trinity. To the left of the fireplace in the den, an original door opens to reveal the trademark spiral box staircase, which leads to the top-floor master suite. (Note, though, that the center grab rail usually found in these staircases has been replaced by a modern railing on the wall.) 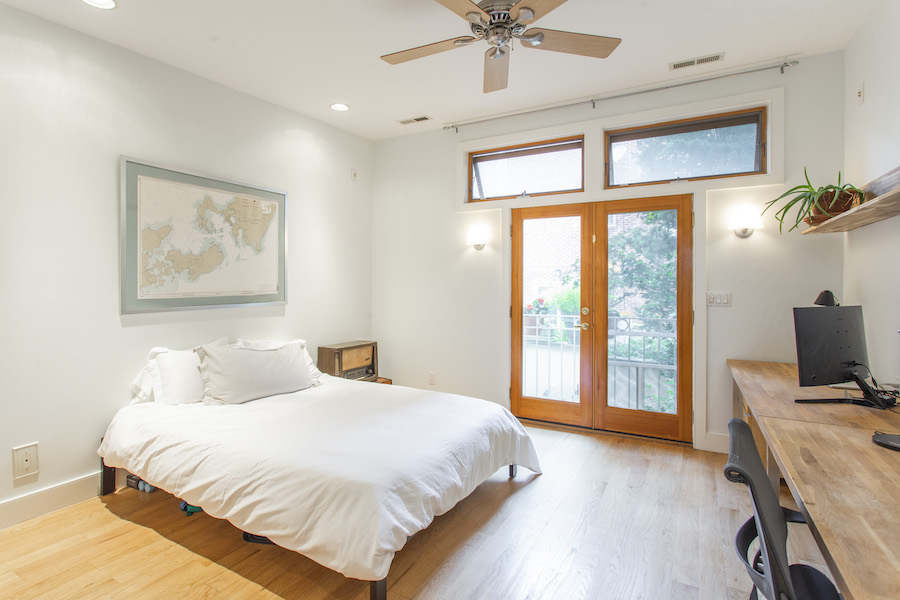 But before heading upstairs, we should note that the rear bedroom on this floor has an en-suite bath, a work desk that can accommodate two people and a Juliet balcony overlooking the courtyard. 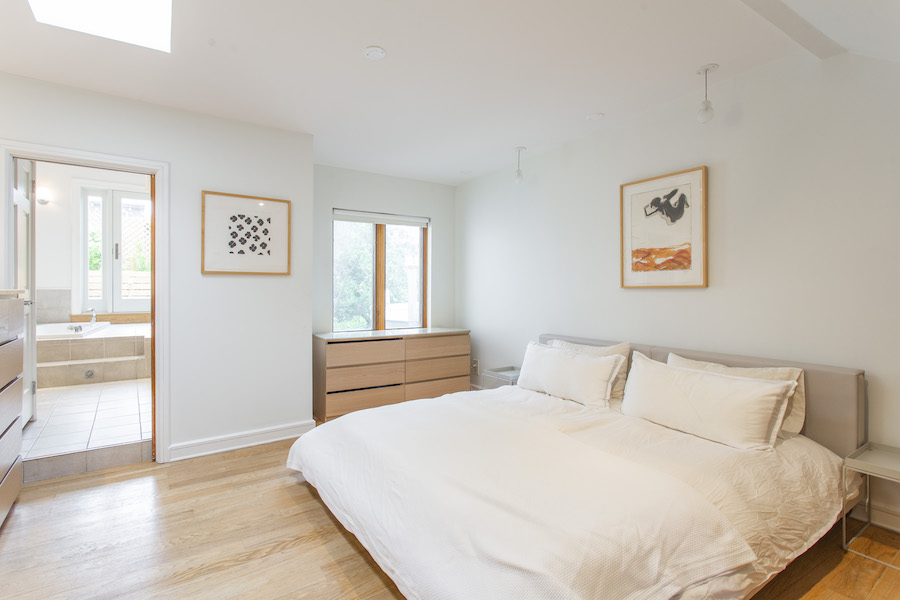 The primary suite on top is a private retreat all your own, with several luxurious amenities. The original dormer front remains in place in the bedroom, but the back half of the original house’s roof was removed and replaced with a higher skylit one to make a connection to the primary bathroom possible. (This room would have been the half-story of the original house.) 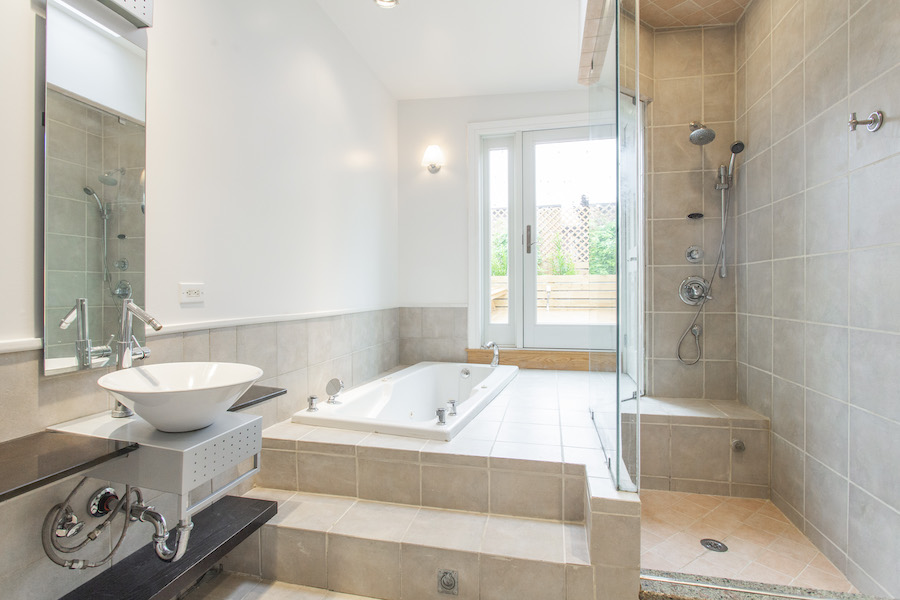 That bathroom features a separate toilet closet, a full-tile stall shower, a floating vessel vanity and a sunken soaking tub. It also contains the laundry. 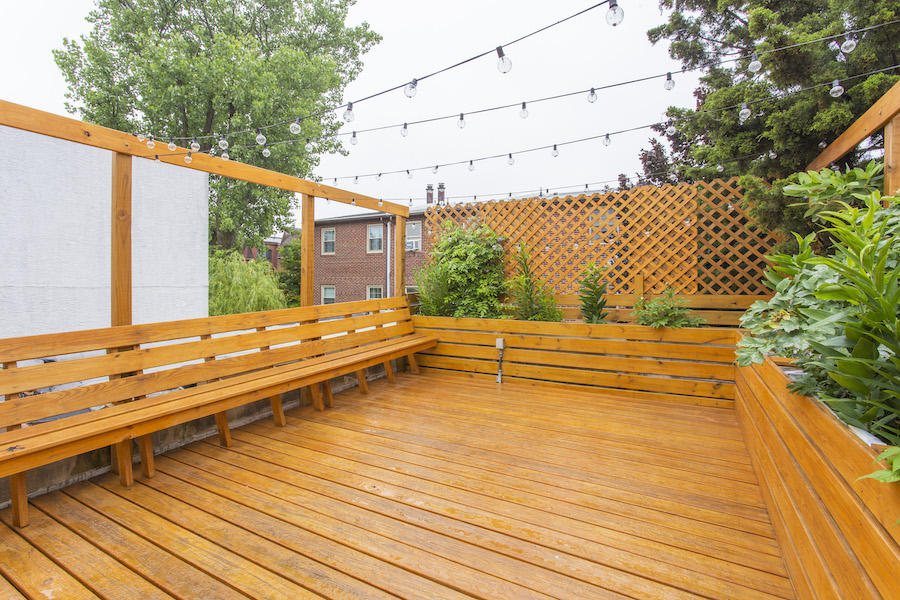 Walk up the stairs, past the tub and through the door at the rear of the bathroom to reach your own private roof deck. You could conceivably stick a beverage fridge and coffeemaker in one of the bedroom’s roomy closets and turn this floor into a totally relaxing place to start and end your day.

How were the owners able to do all this when the house is historically certified? Here’s how: City historic certification does not extend to a building’s interior unless that interior is itself also designated historic. Most domestic interiors are not certified in this fashion, which means that if one wanted to, they could recreate the bridge of the Starship Enterprise in one of these historic trinities if its interior is not designated historic.

Fortunately for you, the owners of this house had the good sense not to take things that far. Instead, they are bequeathing to you a Queen Village historic trinity house for sale with a great layout, nice amenities and loads of contemporary flair in an attractive location. This tree-lined block is convenient to the Delaware waterfront, South Street and Head House Square, Shot Tower Playground, Mario Lanza Park, Fabric Row and Washington Avenue. The big-box Valhalla along South Columbus Boulevard is also a short SEPTA bus ride away, and several nearby routes can take you there.

Thus you get to have your history and your modern style and convenience all wrapped up in an unusually spacious package that began life in 1768 as a simple trinity — or a “messuage” if you prefer.

OTHER STUFF: The sellers will include a year of prepaid parking with an acceptable offer. Showings begin Thursday, June 10th.