On the Market: Modern Townhouse in Northern Liberties

Built by one of the city’s best speculative builders, this four-years-young townhouse offers plenty of space, style and comfort in a very convenient location. 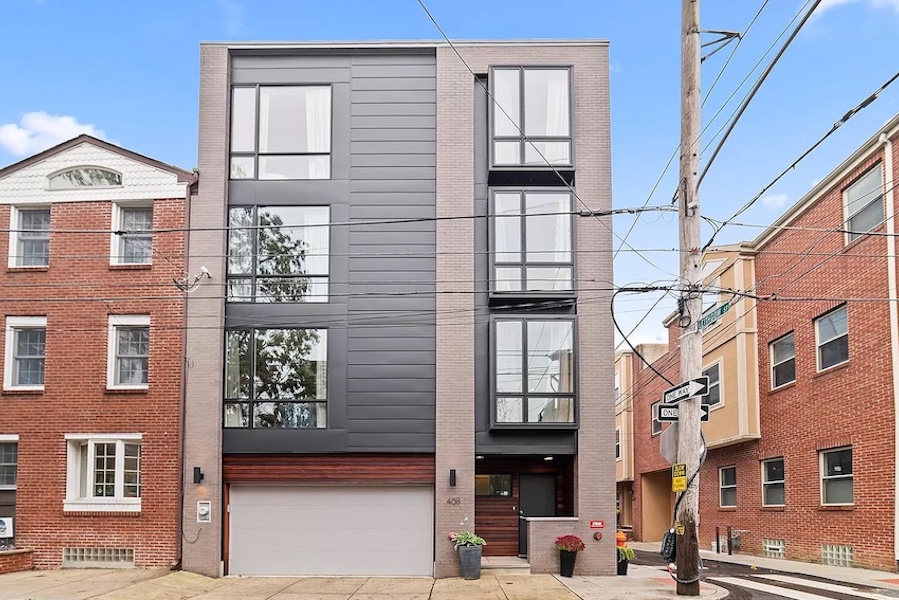 My path to this job runs right through Northern Liberties: it was the neighborhood I chose to focus on when realtor-developer Noah Ostroff kicked me out of the office and told me to go blog back in the mid-2000s. Several attributes made Northern Liberties a good neighborhood to blog about: It had an active civic group with unusually knowledgeable (and colorful) residents serving on its zoning committee. And after playing the role of “Philadelphia’s next hot neighborhood” for more than 20 years, it finally had grown into that role as developers and builders poured into the community with proposals.

This made for often-entertaining Northern Liberties Neighbors Association Zoning Committee meetings. Often enough, the Zoning Committee members could see when a developer was trying to pull a fast one on them. But there were some developers whose proposals always got a respectful hearing from the panel.

One of those was Callahan Ward. The development firm headed by general partners Nino Cutrufello and Marcus Toconita produced projects of consistently high quality that respected the fabric of the neighborhood where they were situated. And they listened to constructive criticism.

The Northern Liberties modern townhouse for sale you see above is one of Callahan Ward’s many projects in the neighborhood. I’d long since moved from the NoLibs beat by the time it was completed four years ago, but it displays all of the hallmarks of a Callahan Ward house.

One is a handsome but restrained modern style. This is one of those structures that wasn’t meant to be a showstopper on the outside. Instead, it was designed to complement rather than clash with its surroundings. (Which, come to think of it, may explain why so much of our modern domestic architecture in Philly comes off as uninspiring.) 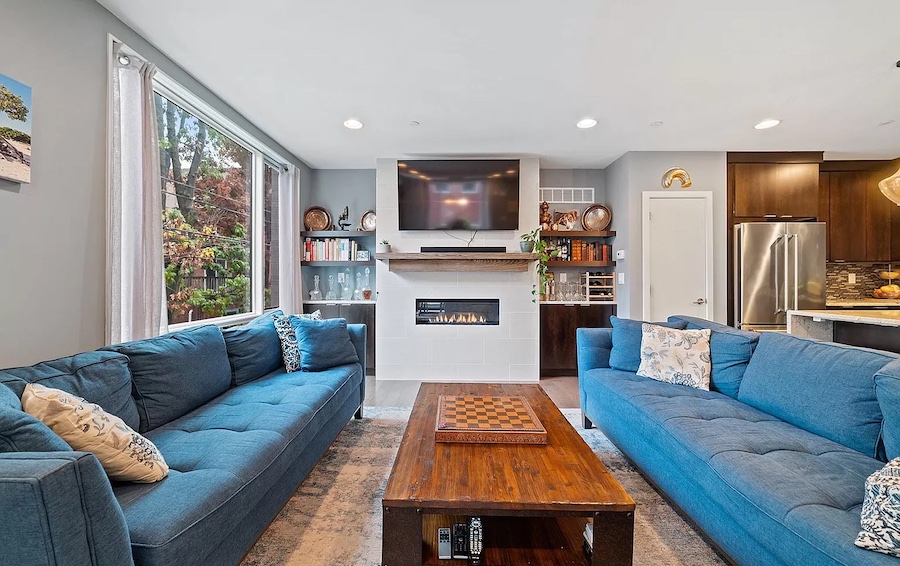 Another is plenty of room on a totally open main floor. Huge full-height windows let light flood the space, and its layout is designed to allow easy flow while establishing distinct spaces for relaxing, dining and cooking. 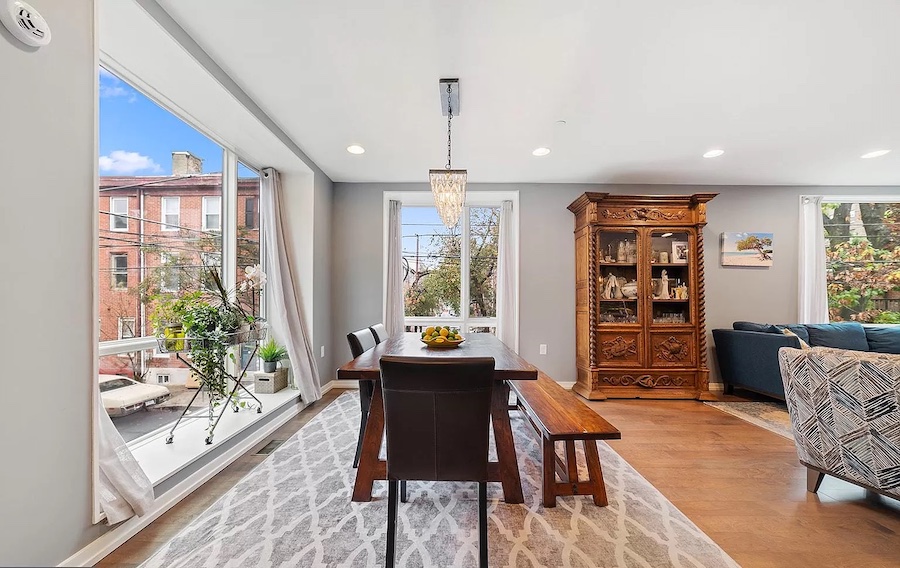 The gas fireplace defines the living area, while the crystal chandelier sets the dining area apart. 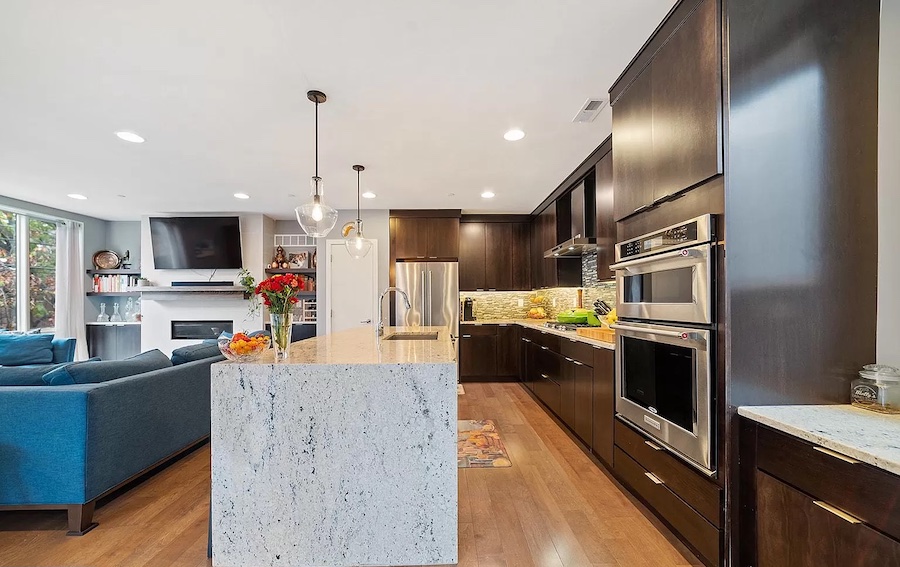 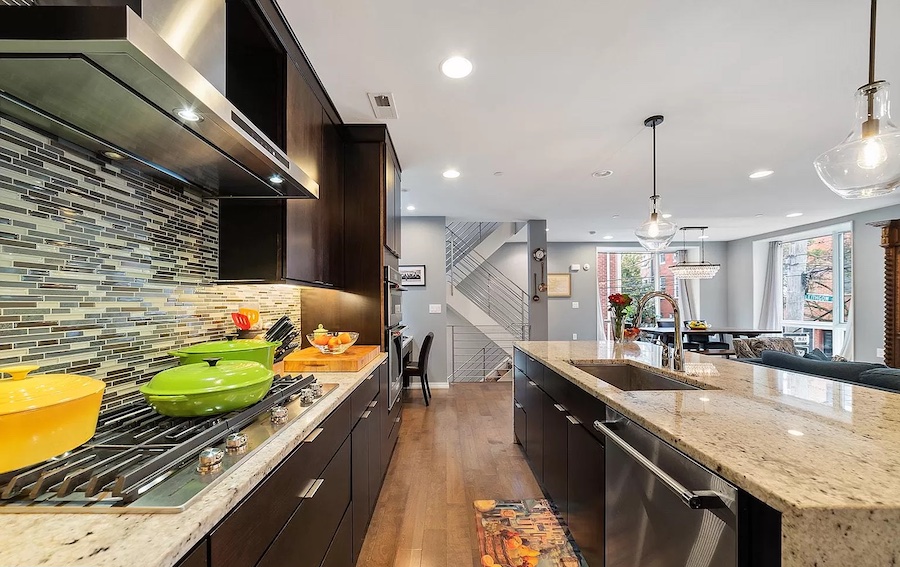 The kitchen, of course, always sets itself off — it has to. This one is nicely equipped, smartly styled and includes a home office space. 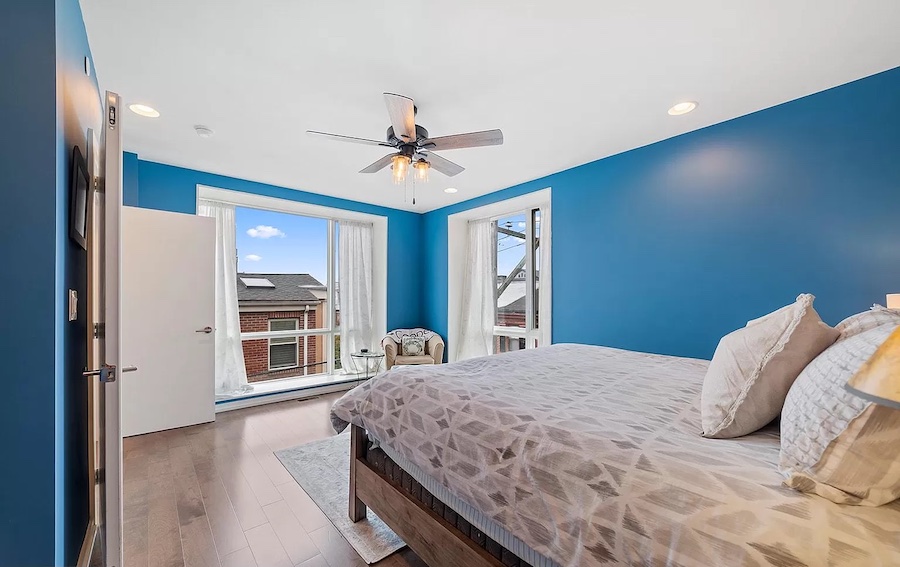 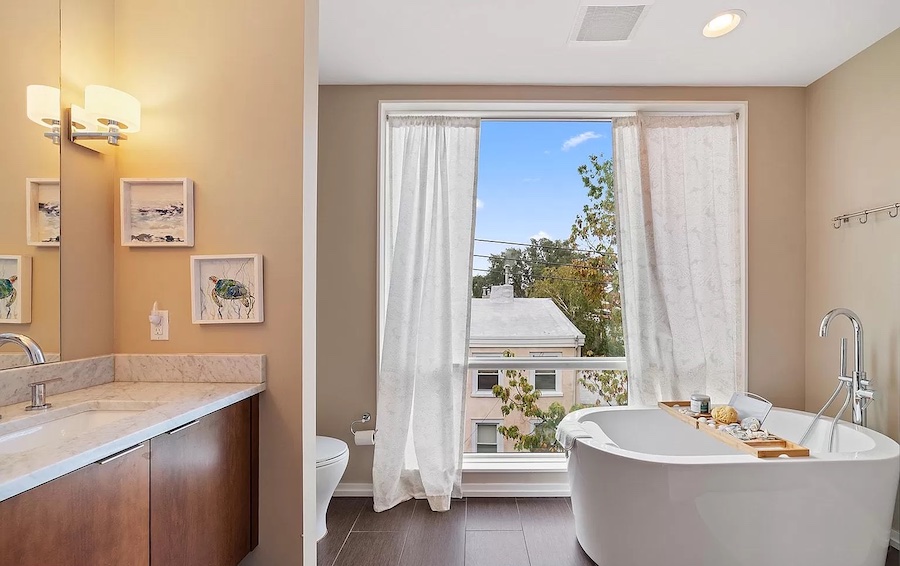 Above the two equally well-lit bedrooms on the third floor, the fourth-floor primary suite combines a spacious bedroom, a well-organized and equally spacious closet, and a light-filled bathroom with dual vanity, soaking tub and frameless glass-enclosed shower. 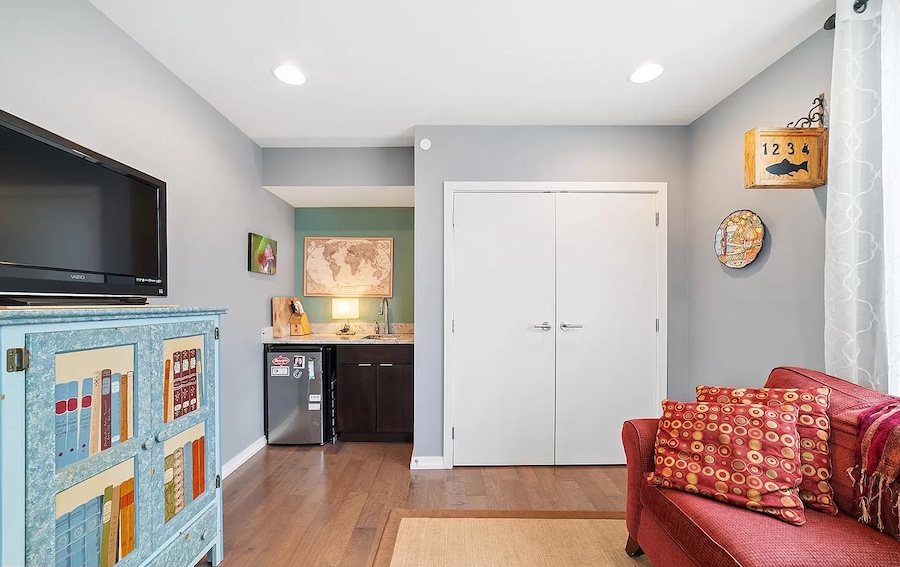 A den outside the suite contains a wet bar and the laundry facilities; it serves as the gateway to the full-floor roof deck on top. 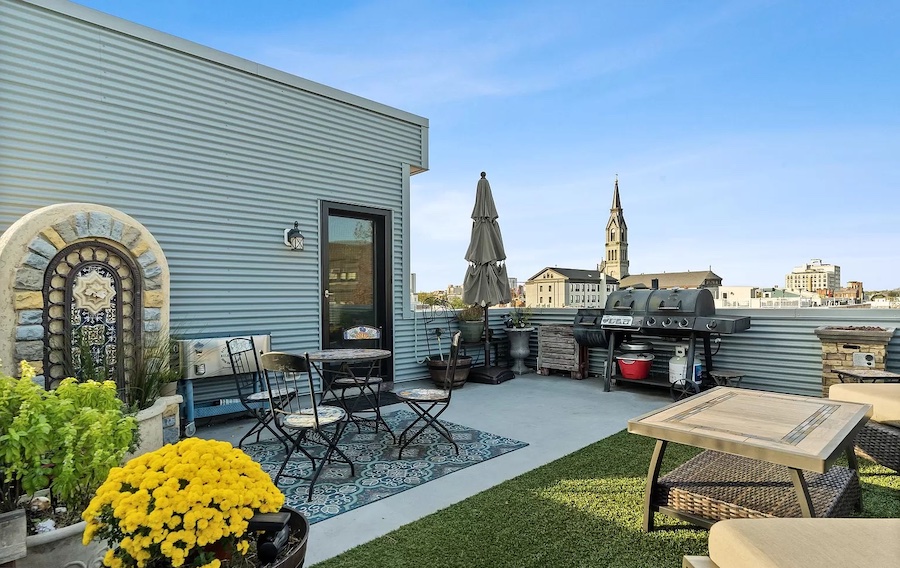 The building’s wide street frontage means the roof deck is extra spacious and offers unobstructed 360-degree views of the city. 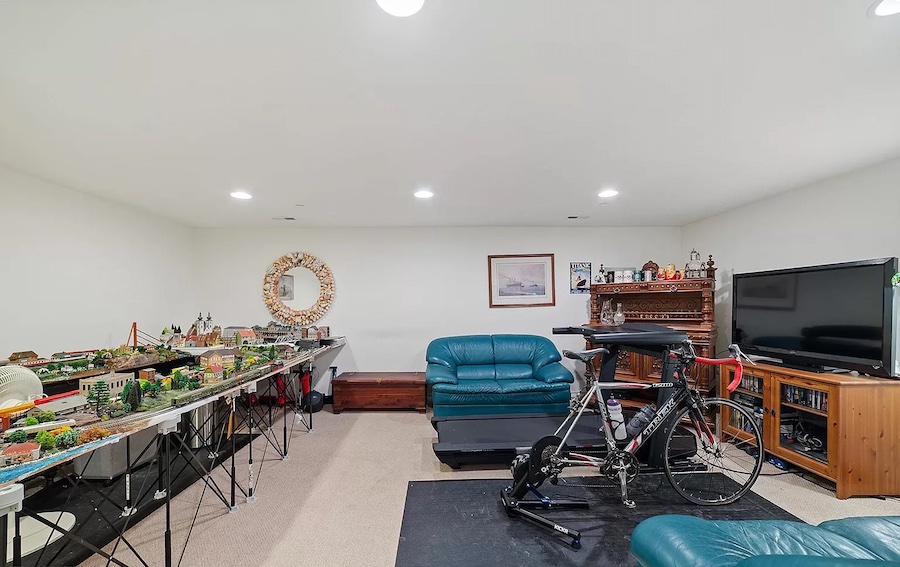 Below all this, a finished basement can function as a rec room, a home gym, flex space, guest sleeping quarters or, as here, a great place to set up your model railroad layout.

This house is located near Northern Liberties’ northwest corner, but the neighborhood’s compactness means that it’s close to all the popular neighborhood amenities: Liberty Lands Park, the shops and restaurants along North Second and Third streets, the supermarket and other neighborhood shopping at Second and Girard, and several SEPTA bus and trolley routes.

Buy this Northern Liberties modern townhouse for sale and you will acquire a solidly built, spacious and attractive modern structure that will make you feel right at home if you love modern design.