The iconic Harbisons’ Dairies milk bottle sparkles once again, thanks to a guy who just wanted more space for his promotional-products firm. He ended up becoming a landlord too. 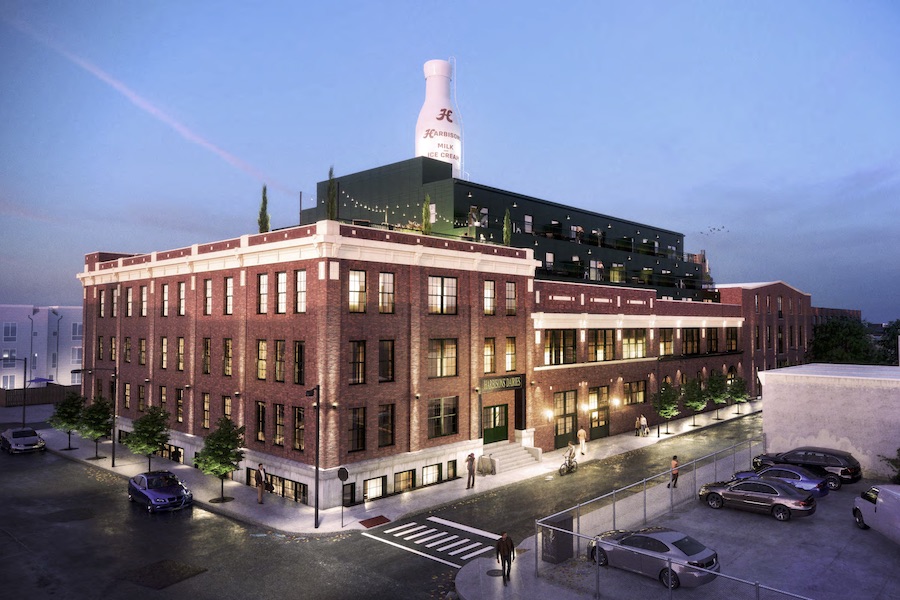 Ever since 1917, the milk-bottle-shaped water tower that rose above the Harbisons’ Dairies building has been an icon two neighborhoods share: Fishtown and East Kensington. Rusting away ever since the dairy beneath it closed in 1990, the bottle remained a landmark both Fishtowners and Kensingtonians claimed as their own.

Some structural engineers who had looked at it said it would have to be torn down. Instead, it still stands, restored and repainted in a variation of its original appearance.

It might well have been torn down had Sterling Wilson not gotten his hands on both it and the building under it.

But because he did, Fishtown’s most distinctive structure sparkles once again, and the neighborhood now has one more surprisingly affordable market-rate apartment building.

Wilson hadn’t planned on doing any of this. He was just looking for a new home for his promotional-merchandise company, Pop! Promos. It had outgrown its home in Northern Liberties.

“My background is in running businesses, not real estate development,” says Wilson. “I needed a new office. I was running out of space.” 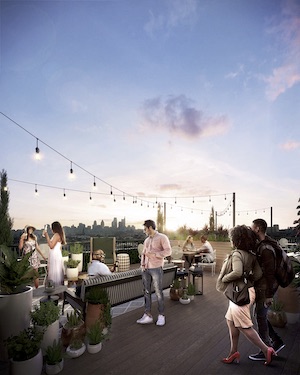 Wilson founded Pop! Promos in 2011, after he quit his undergraduate studies at the University of Southern California in Los Angeles. After striking paydirt by selling branded sunglasses and similar items to Trojans football fans, he moved the company to Philadelphia in 2012 to be closer to his customers, who operated on Eastern Standard Time. Philly proved to be the Goldilocks location for his firm: “New York was too expensive, Boston was too cold, DC is a swamp, and Baltimore? I watched ‘The Wire,’” he says.

After operating out of a South Philly rowhouse for about five years, he sought an actual commercial building to occupy. That search ended when the city found a site in Northern Liberties and assisted him in building a headquarters. But by the following year, the company’s explosive growth led Wilson to start looking for new, bigger digs. The former Harbisons’ Dairies building, the lone survivor of four plants the company had in the city, spoke to him.

”It was a lot bigger than we needed, but it had strong bones,” says Wilson. “It was in the path of development too. A beautiful, beautiful building.” (And one that he might not have been able to acquire had guerrilla preservationist Oscar Beisert not gotten this last surviving Harbisons’ plant placed on the city register of historic places.)

And after falling in love with it, he then realized that he would have to become a developer to make it work. 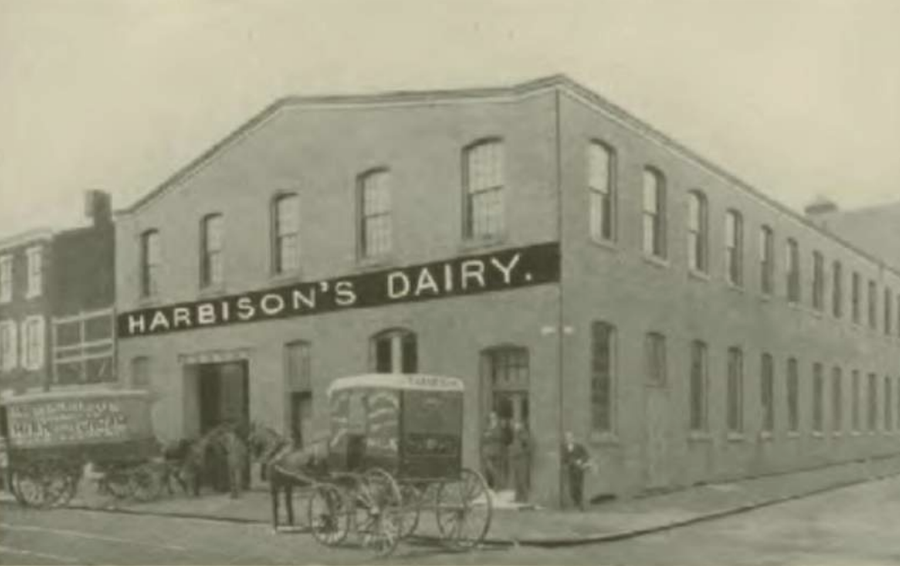 The original 1895 Harbison’s Dairy building. Pop! Promos’ offices are on its second floor.

And building residential here means building apartments. And to build enough apartments to make the numbers work, Wilson discovered he would have to build yet another addition to the complex, which consists of four joined buildings built between 1895 and 1915.

After an initial deal with a group of New York investors to finance the project fell through, Wilson turned to local talent. He teamed up with Douglas Jordan, founder and managing partner of Southwood Properties, to line up the money needed to get the project off the ground. (Doug had been around the block on multifamily property development in Philadelphia: before launching Southwood in 2018, he had co-founded Alterra Property Group with Leo Addimado. Among that firm’s early projects: the historic restoration of the Versailles apartment building in Rittenhouse Square.) 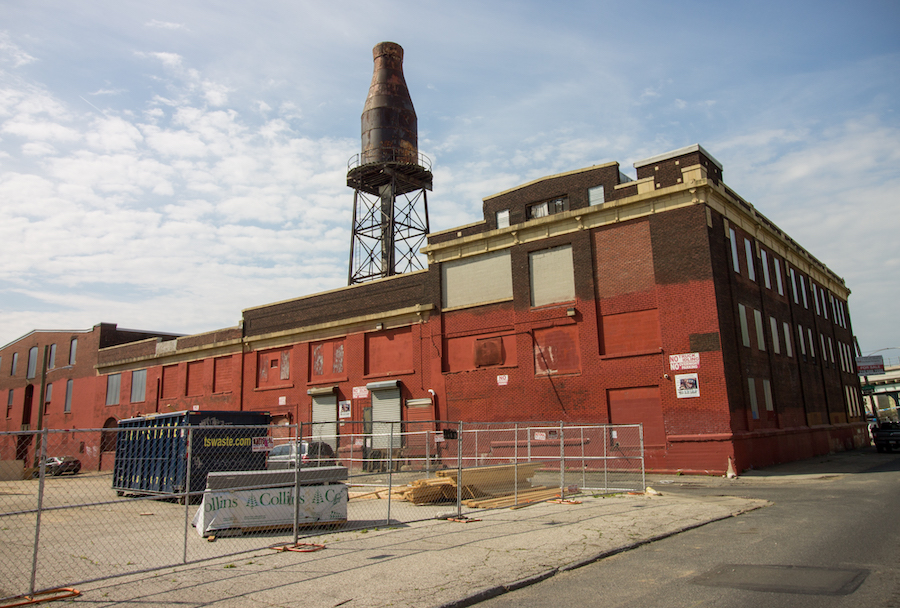 The Harbisons’ Dairies complex before reconstruction began. Wilson bought the building from the owners of the Cousins’ supermarket chain in 2018.

The project also got a crucial assist from the Trump administration’s Opportunity Zone program. The program, enacted in 2018, offers tax credits for investing capital gains in construction projects in designated low-income areas, and Fishtown and Kensington qualified.

The incentive lured PNC Bank to become the majority investor in the project, something Wilson described as “very innovative” for the fairly conservative bank: “They’re an equity investor. They could lose money on this project. Banks don’t lose money. They’re taking a risk to really improve a neighborhood.”

The Opportunity Zone tax credits actually allowed Wilson to do something no developer in the city has done lately: build new market-rate apartments with rents under $1,000 per month. (Sorry, they’re all taken; the low rent was a pre-construction special.) “We couldn’t have done this project if it weren’t in an opportunity zone,” says Wilson. 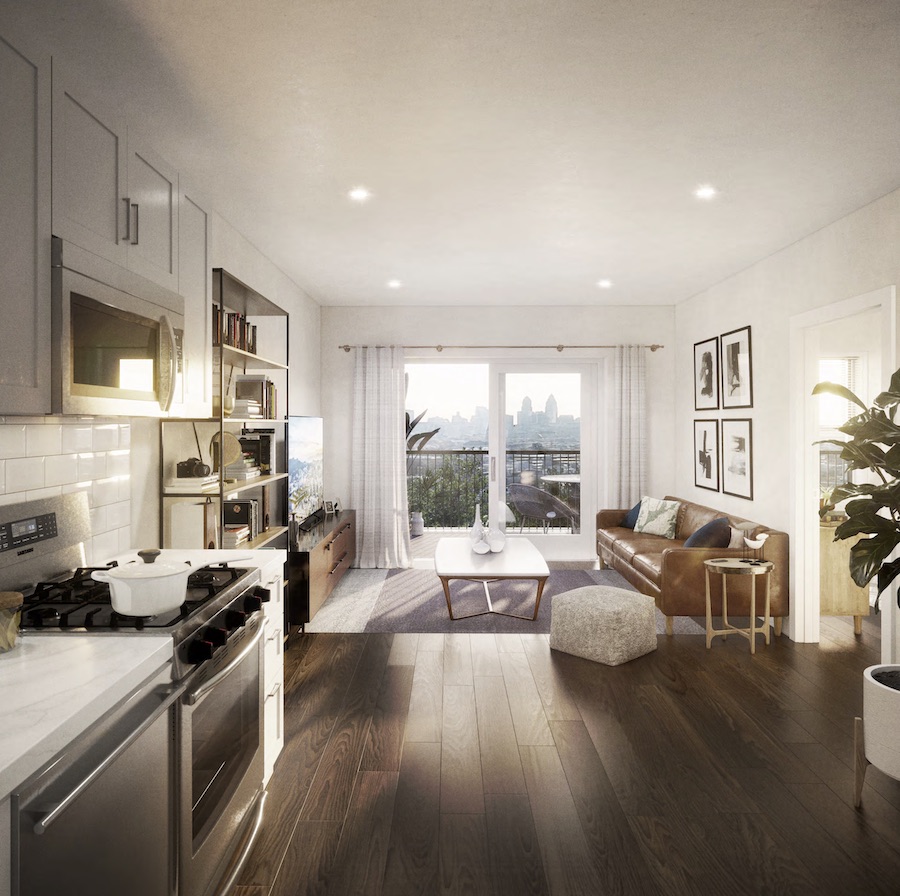 Rendering of a typical apartment

With financing in hand, Wilson and Jordan then assembled an all-star team to design, outfit, build and promote the Harbisons Dairy: SgRA Architects worked on the building, Rohe Creative on interior design, City Center Construction on the actual construction and Cohere on the branding and marketing.

The buildings’ historic certification meant that the renovation and expansion of the Harbisons Dairy building had to follow some specific rules.

“There were some obvious things, like restore the milk bottle, don’t tear it down,” Wilson says. (That task was made much easier when structural engineers hired bv Wilson found that the water tower was structurally sound and in excellent condition, rust aside.)  “And don’t change the facade excessively.” (The original buildings’ facades remain unaltered.) “But the things that added complexity and cost to the project were things like the windows. They needed to exactly match what was in before. Not similar, not very close, but an exact match.”

The end product is a handsome six-story building consisting of the three original brick buildings and a metal-clad three-story recessed overbuild. The new construction surrounds the freestanding water tower, which now sits in a small interior courtyard. 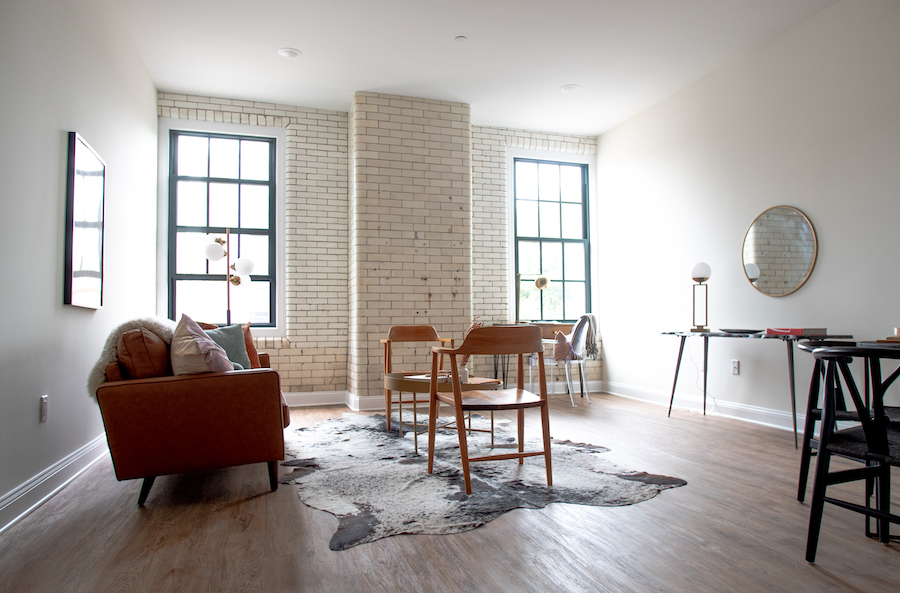 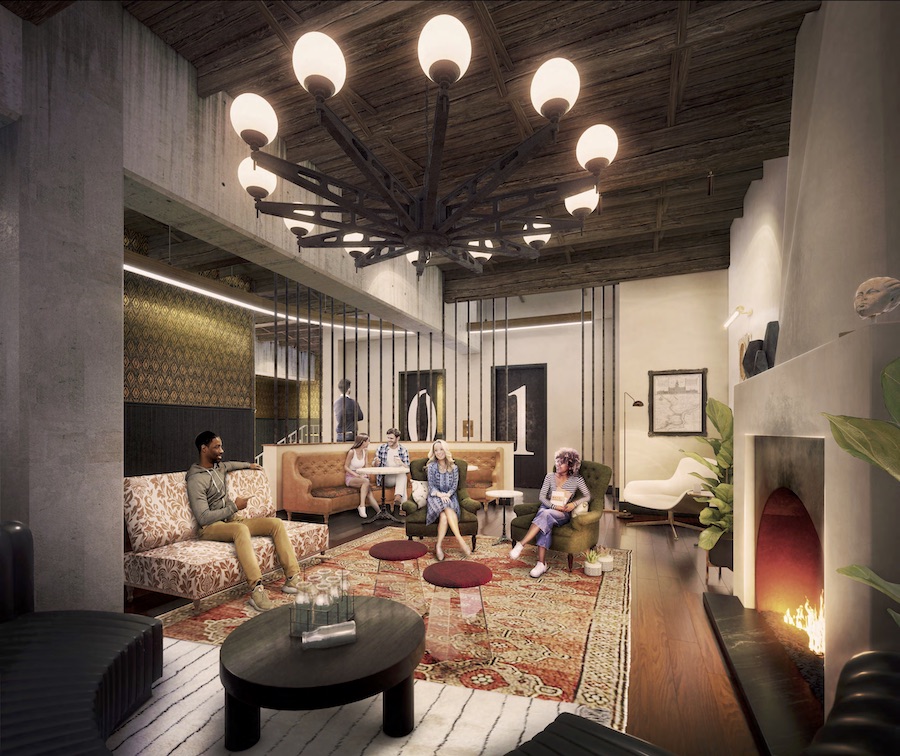 The common areas have contemporary designs that at the same time draw on the buildings’ history. Other amenities include a fitness center and a commercial space slated to house a coffee shop. 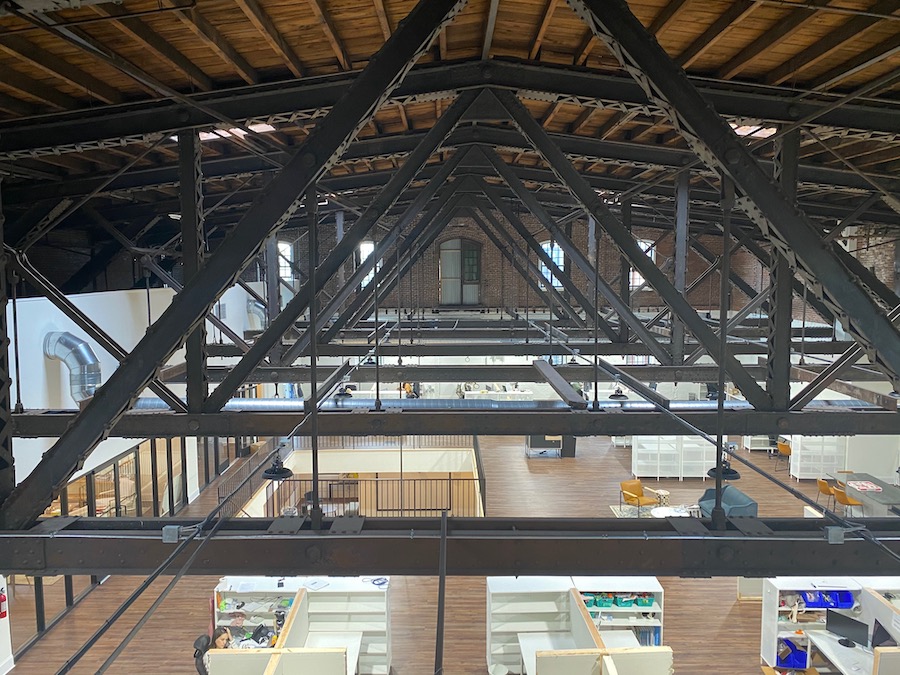 Overhead view of Pop! Promos’ office main floor. One of the 30 tension rods that originally held up the floor is visible in the foreground, and another can be seen near the stairwell opening in the middle distance. | Photo: Sandy Smith

Wilson’s company is the first tenant in the structure, occupying the second floor of the original 1895 stable building. The space designed by Design Librarian where Pop! Promos has its offices had a unique and daring structural support: it was suspended from the building’s roof by 30 steel tension rods, leaving a column-free space for the delivery wagons and their horses below. Wilson removed most of the rods and added columns below to support the floor in the renovation, but some of those original tension rods remain in place.

And then there’s the milk-bottle water tower. “It was one of the first ones that was shaped like something,” says Jeff Harbison, the fourth-generation descendant of Harbisons’ Dairies’ founder. It was also unusual for the time in that it was made from plates of steel that were riveted together; most water towers at the time were made of wood.

How iconic is the tower? Wilson noted that one of the photos in his office is of an employee who worked here, lived in the neighborhood and had the bottle tattooed on her leg. Both Harbison and the neighbors are thrilled that Wilson was able to restore it to like-new condition.

And it turns out that Wilson’s experience as an accidental developer has made him hungry for more. Literally: “We’re actually developing another project a few blocks from here that has purpose-built food manufacturing spaces,” he says.

“It’s gratifying, taking existing buildings that have gone into disrepair, digging up their history and bringing them back to life.”

The first residential tenants have already moved into the building, which is in the home stretch towards completion.

The Harbisons Dairy by the Numbers

Total number of parking spaces: None

Pet policy: Pets welcome, up to two per unit. The building has a dog walk on its roof deck and a dog wash station on its fourth floor. Contact leasing office for details about rent, size and breed restrictions, if any.