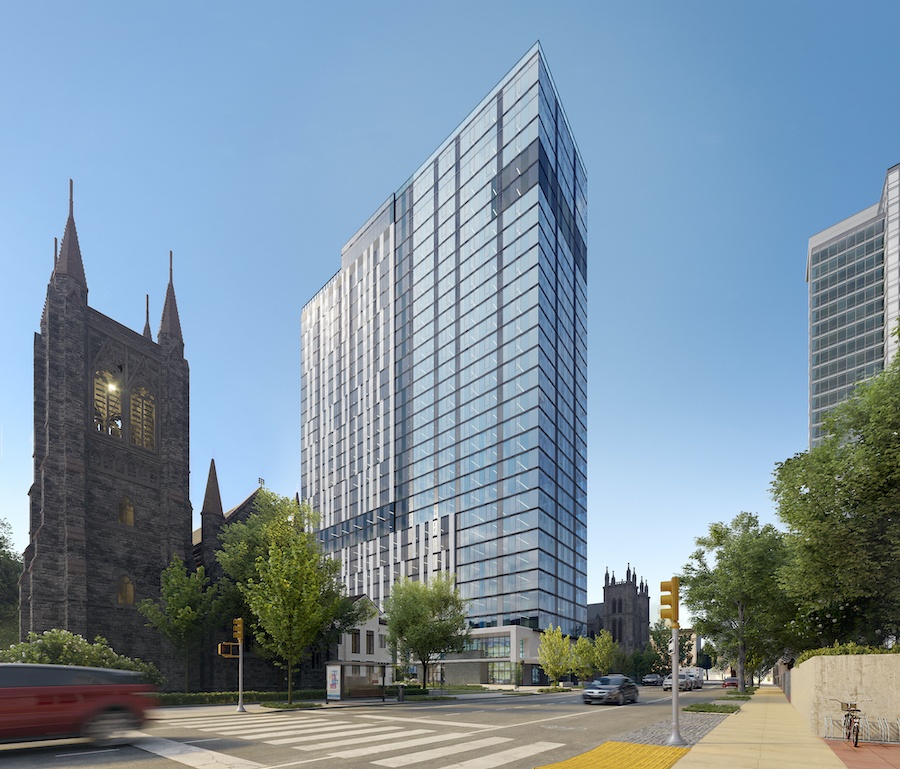 The Chestnut, seen here in a rendering, is the first of the new crop of University City apartment buildings aimed squarely at the grownups. It welcomed its first tenants in July. | Renderings: SITIO architecture + urbanism; photos: The Chestnut at University City

Rising 30 stories above the patch of ground where the University of Pennsylvania’s Catholic student center once sat, The Chestnut is the latest addition to the burgeoning University City apartment market.

But where most of the other new and renovated buildings in the Penn campus area have sought to fill their units mainly with students looking for a not-so-dorm-y environment, this one aims its sights a little higher.

Greystar hopes that its 15th Philadephia property will be the place where those students move once they’ve made it in the real world.

To persuade them to do this, they turned to two local pros with a knack for creating distinctive spaces: SITIO architecture + urbanism, an architectural collaborative headed by visionary architect Antonio Fiol-Silva —whose projects include several Willard Rouse Award winners, an Urban Land Institute Global Award for Excellence honoree and the first residential project to achieve LEED Platinum for Neighborhood Development certification — and Floss Barber, the nationally known interior designer whose credits include this city’s most original moderate-price hotel.

Together, these two have created a building that’s sleek, sophisticated and stylish, mixing clean minimalist lines with warm and inviting architectural features.

“‘Sophisticated’ was the word used to describe the building the architect and the client was going for,” says Tracey Keyser, community manager at The Chestnut. 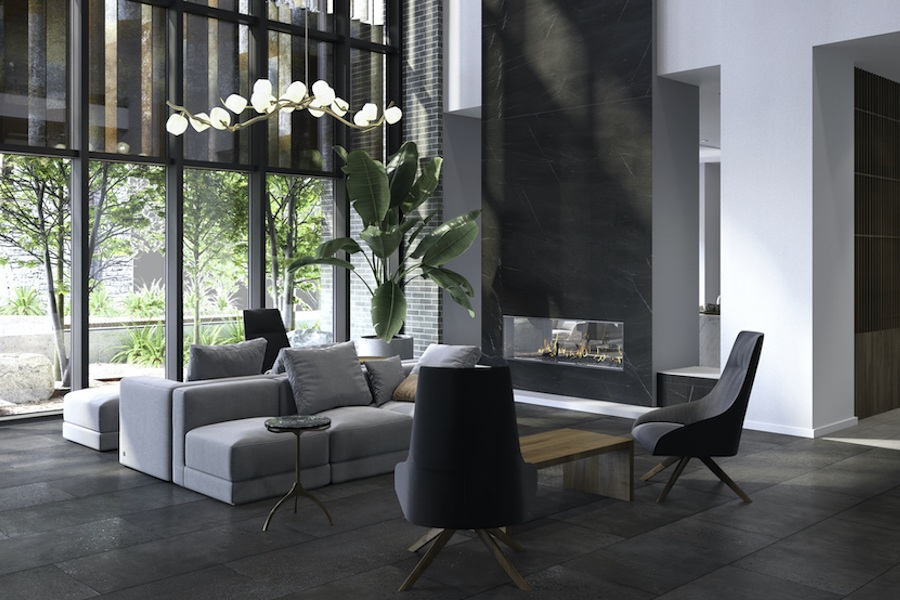 Lobby lounge at The Chestnut

Greystar got that in spades. If it weren’t for the double-sided fireplace in the lounge area of the two-story-high building lobby, one might think they’d just walked into the headquarters of an extremely prosperous corporation. 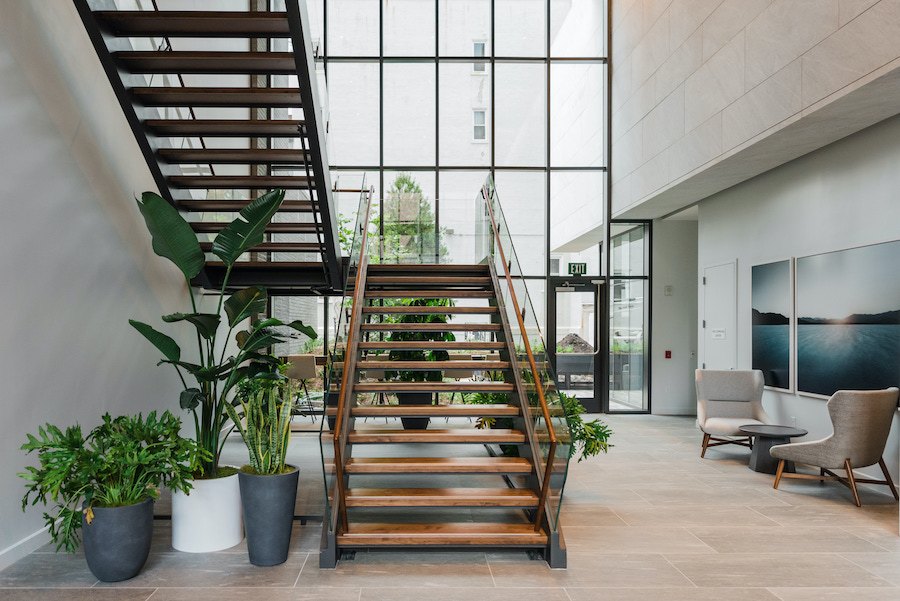 The fireplace, the chandelier over the lounge seats, and the glass-lined floating staircase along with the exterior metal panels visible through the full-height windows give the main lobby loads of businesslike pizzazz softened by the greenery inside and out. 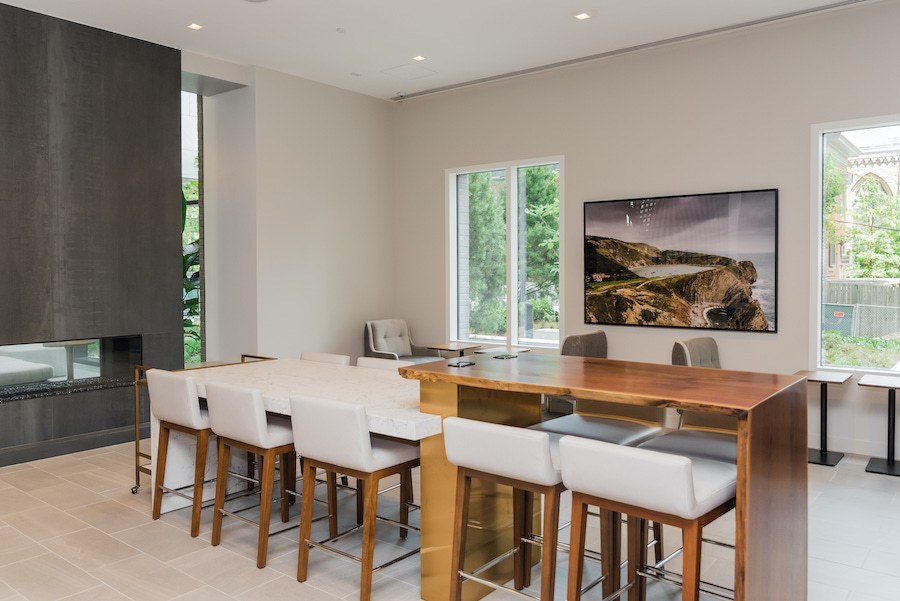 The co-working space on the main floor also has that businesslike air about it, and it’s definitely equipped so residents can set up their workstation here if they want. But again, there’s that fireplace to remind them they’re not in an office. 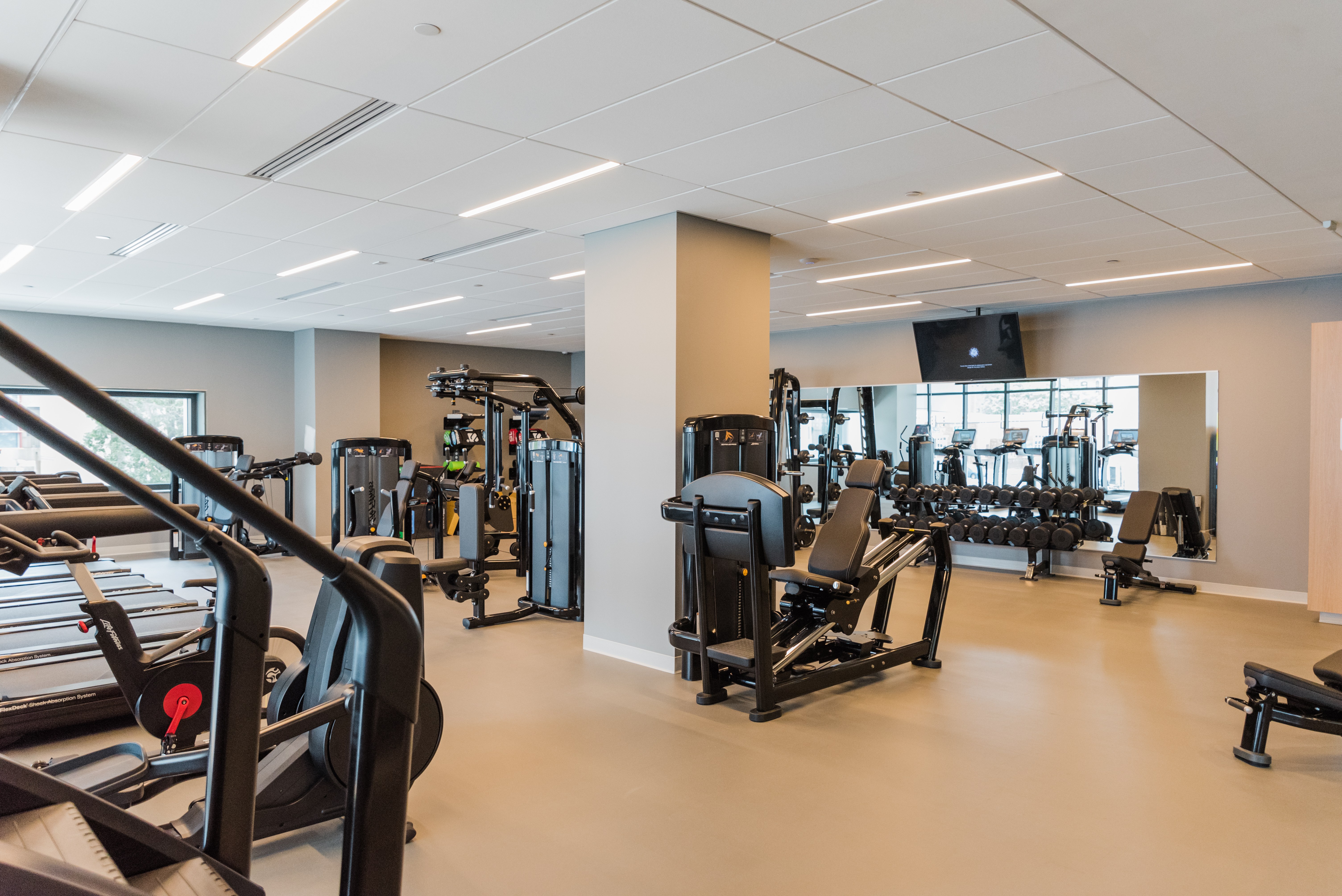 That this building was made for living becomes much clearer on the two amenity floors that bracket the apartment floors. The second floor, which also contains a few apartments, contains a conference room, co-working space, game room, media room and fitness center. 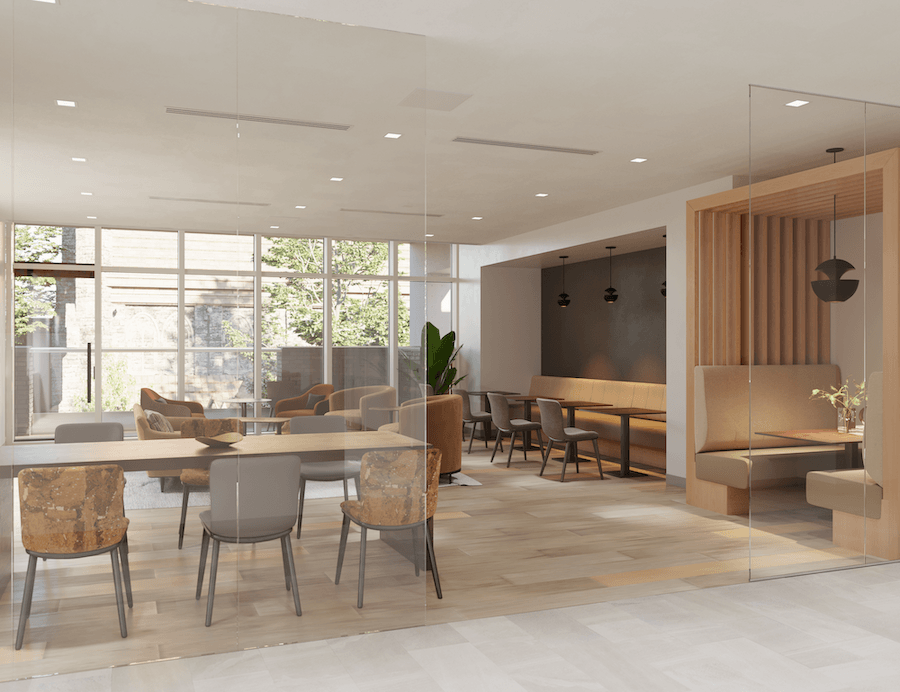 The second-floor co-working space more closely resembles a cafe, and it will have both food and beverages in the form of self-serve coffee (also available downstairs) and Simply Good Jars salads. 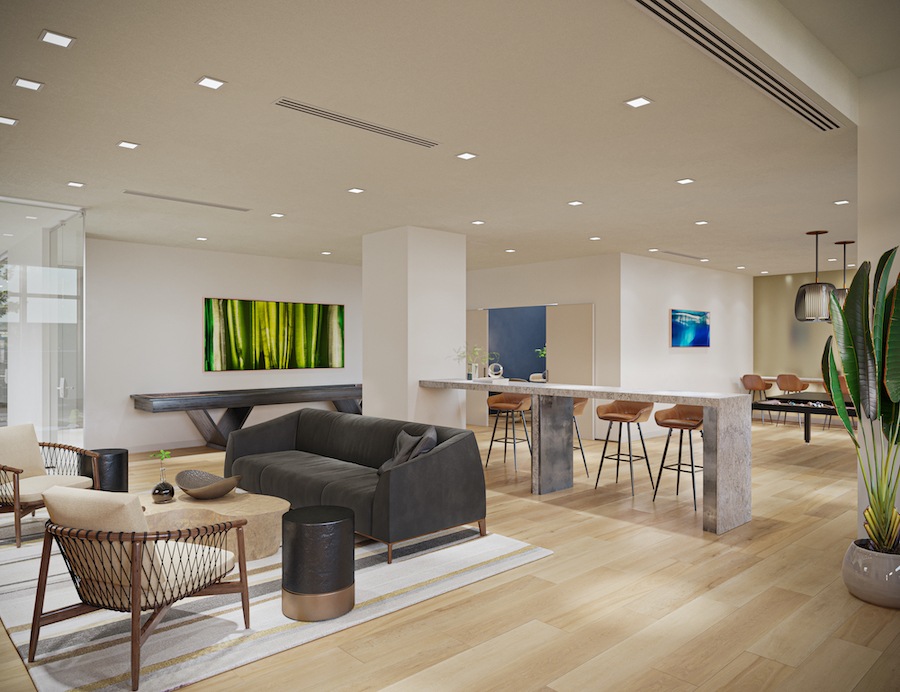 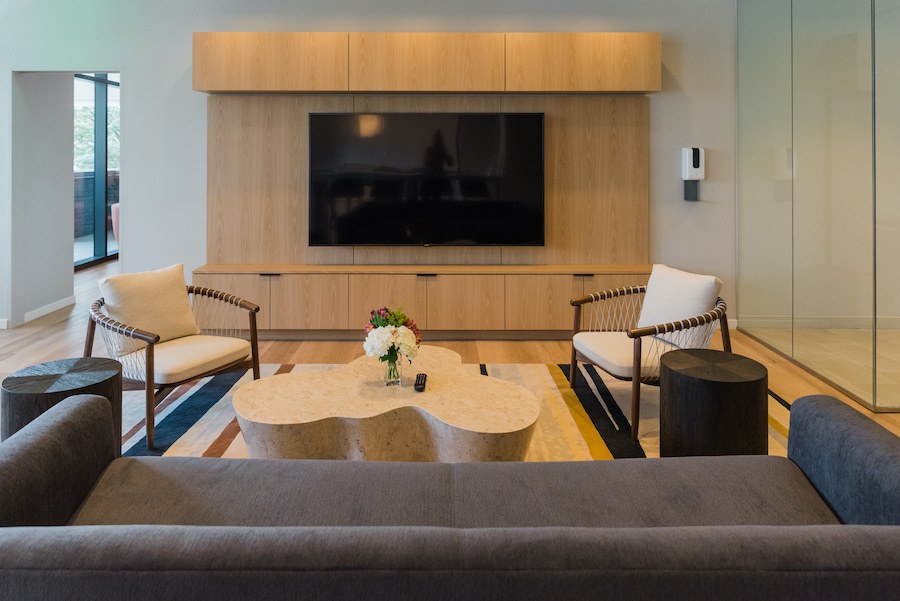 The media/game room includes a shuffleboard table and a lounge with a big-screen TV. In addition to the hallway, an outdoor terrace connects the co-working cafe and game room.

All this, Keyser says, should make COVID-era socializing possible. “Lots of people can be in this space, but it’s also great that everything is separated so we can still maintain social distancing.” 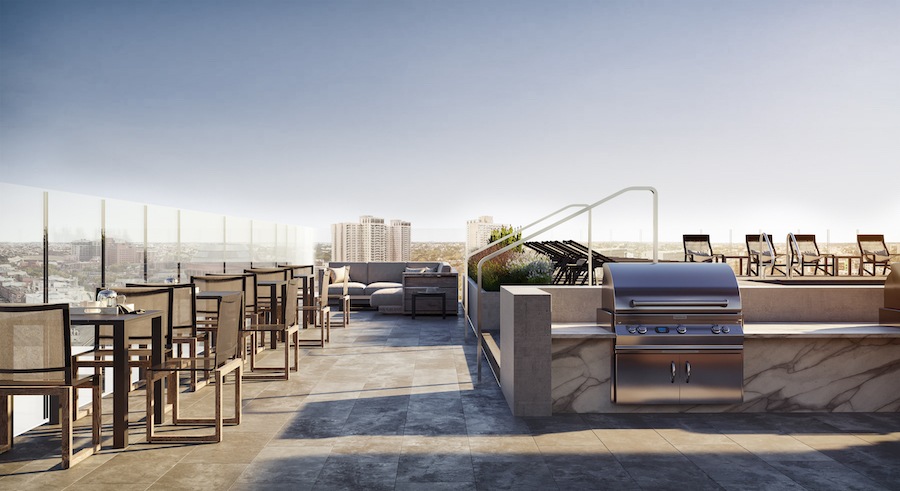 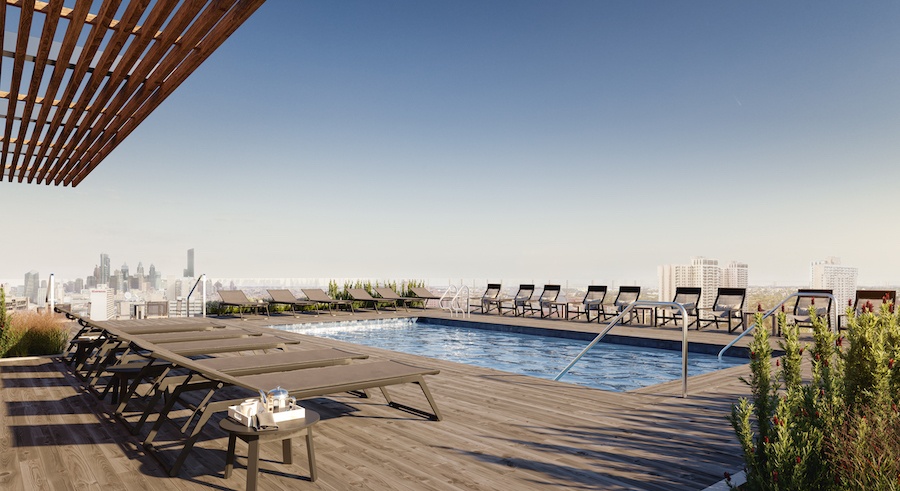 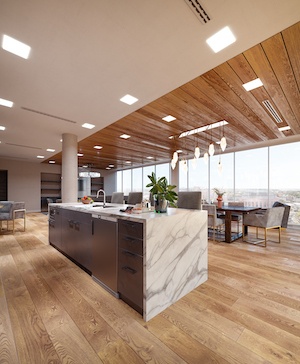 The 29th-floor sky lounge was still under construction when I toured the building, but the renderings here give you an idea of what tenants will experience come fall. The atmosphere here is elevated, literally and figuratively, and the pool and deck will have fabulous views.

The apartments themselves have that raw, minimalist style that’s very much in fashion these days. Open main living areas allow maximum flexibility; some of the tenants who have moved in already have dispensed with the kitchen islands, for instance. 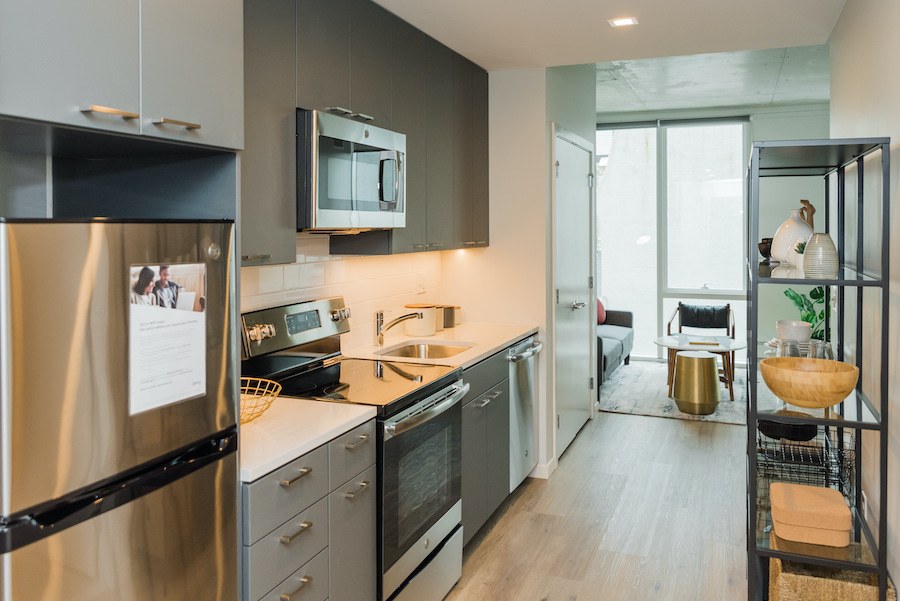 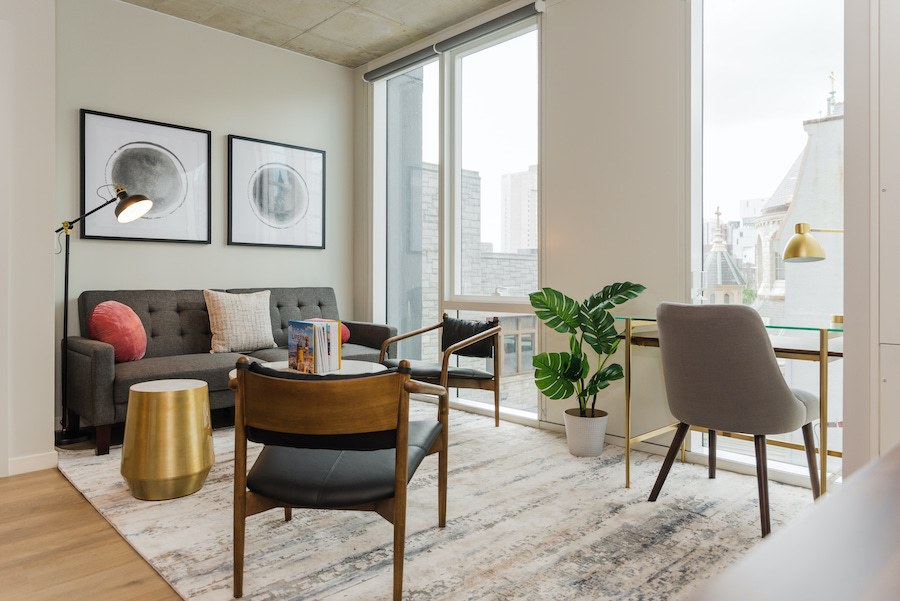 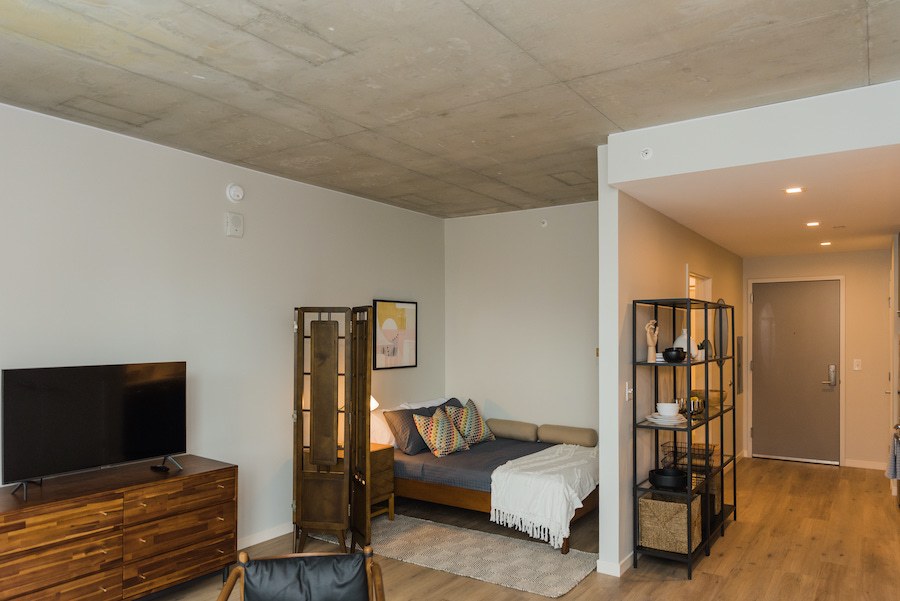 The studio apartments are very intelligently laid out, with the galley kitchen also serving to wall off the sleeping area and distinguish it from the rest of the main living area. 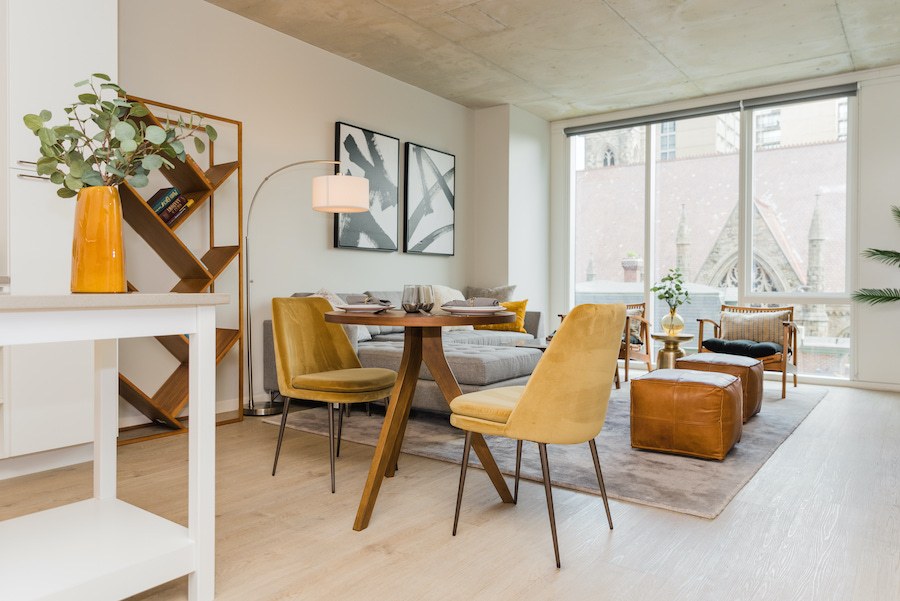 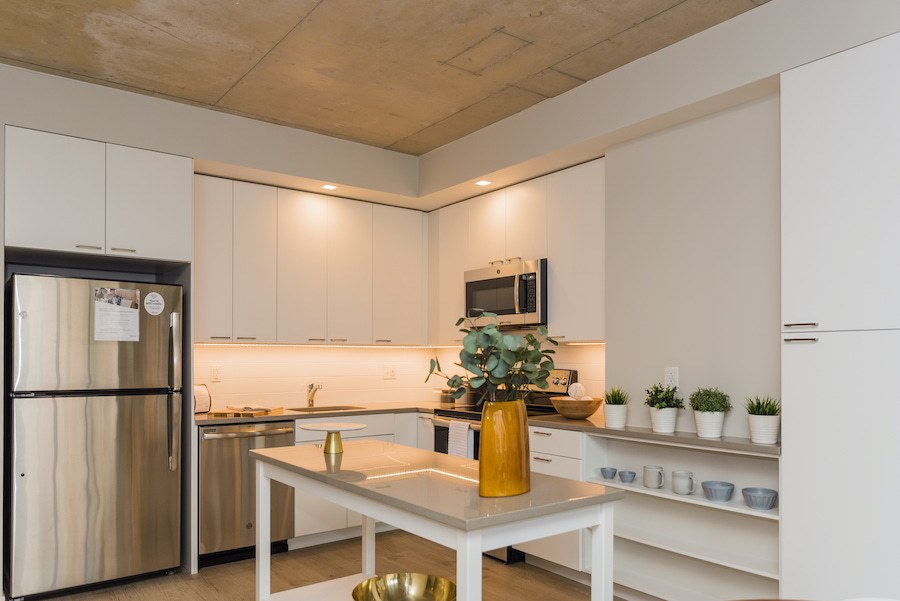 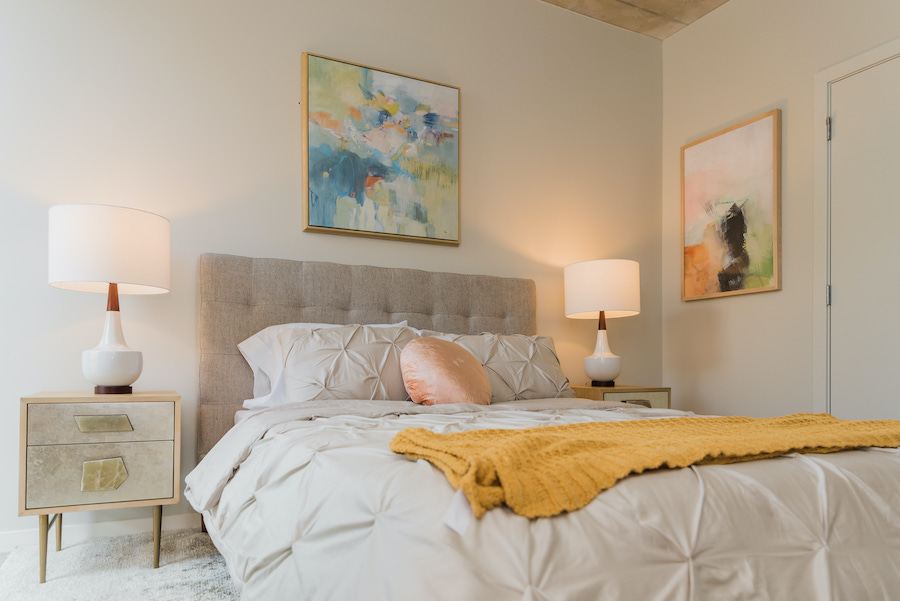 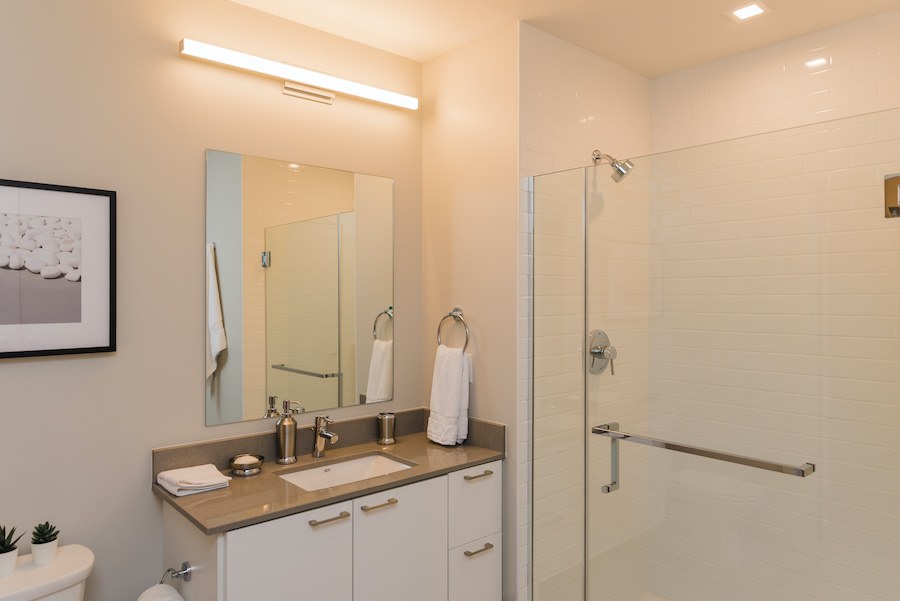 And all of this will be bracketed by greenery when all work is done early this fall. “Our nickname is — we’re considered a tower in a garden,” says Keyser.

The east-side garden next to the main entrance is being developed in partnership with Penn and is designed to serve as a pedestrian pathway leading to Penn’s fitness center across Sansom Street. One of The Chestnut’s two commercial spaces faces Sansom and the other faces Chestnut. The Newman Center, which now serves both Penn and Drexel students, moved next door to the former St. Agatha-St. James School on 38th Street.

The Chestnut’s location and neighbors ensure this building will have strong ties to Penn. But it’s designed to appeal to the campus community’s grownup side.

The Chestnut by the Numbers

Number of parking spaces: 28, in an underground parking garage set to open in December.

Pet policy: Pets welcome, up to two per unit; weight and breed restrictions apply. $500 nonrefundable fee plus $30 per pet per month rent apply.