A Look Inside The Classiest Fairfield Inn You’ve Ever Seen

Take a hotel developer with a love for classic buildings, an interior designer with a flair for the original and an architect who respects the integrity of a building with a notorious past. Put them all together and the result is magical — and wry. 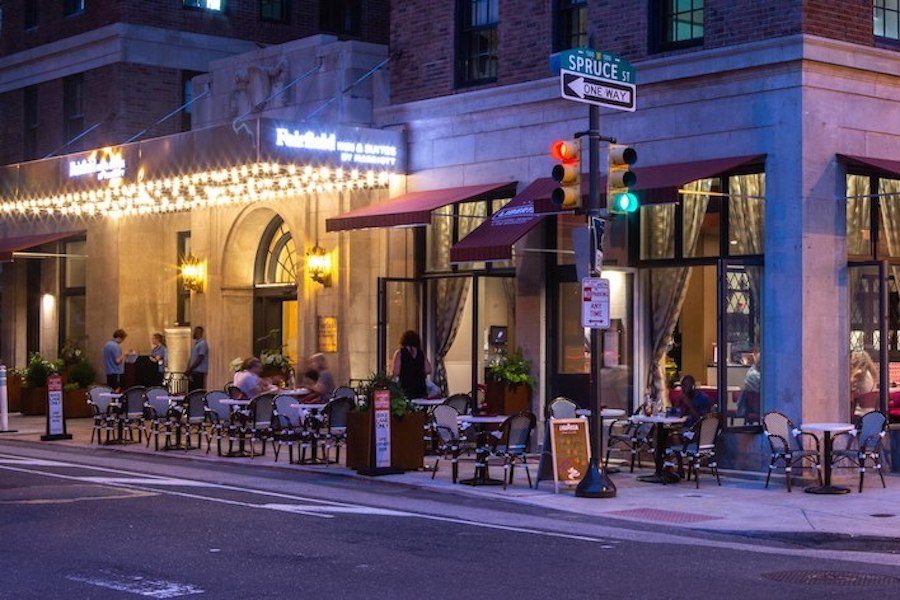 Even at its nadir, there was something elegant about the Parker Spruce Hotel at 13th and Spruce streets in Washington Square West. The simplicity of its neoclassical design gave it a commanding presence that served as a counterweight to both the more ornate Lenox apartments across 13th Street and the stripped-down Gothic Wellington Spruce building across Spruce.

But most people who passed it by probably didn’t think much about all that. Save for the patrons of the gay bar and restaurant that occupied the 13th and Spruce corner, most everyone else in Wash West would probably have preferred it gone, given what went on inside.

Well, it is gone now. In its place is the exact same building, only with a totally different personality. This is the story of how three people made it anew.

The three people are Mihir Wankawala, CEO and founder with his father Nandkishor of The Wankawala Organization; Stuart G. Rosenberg, principal of SgRA Architecture; and Floss Barber, founder and principal of the interior design firm that bears her name.

Wankawala is fond of old buildings, and figured that going into the hospitality business would be a good way to save some of them. Rosenberg has some experience in this department, having made the former Arch Street YMCA into Le Meridien Hotel. And Barber has a track record of designing hospitality interiors that are welcoming, comfortable and fun.

Together, they turned this into the classiest Fairfield Inn by Marriott that you’ve ever seen.

A makeover that was worth the wait

All three had fun with this project. Starting with Wankawala, who found patience to be a virtue in pursuing it.

“I’m the fourth owner of this building, and it was built in 1923,” he says. “And every time the owners decided to sell, it was because either they were retiring or because of their age.” That was the case when Wankawala first tried to purchase the hotel in 2007. The bursting of the housing bubble the following year put the sale on hold. When it finally did go through in 2010, the rest of the market, in particular the lenders, weren’t ready to front the kind of money needed to turn the Parker Spruce into a first-class hotel.

Wankawala thought the building was in just the right spot for one, though. “It’s a beautiful building, given the historic nature of it” — the building is listed on the National Register of Historic Places. Besides, he continues, “it’s only one block away from the Avenue of the Arts, seven blocks from the Convention Center, and it’s in Midtown Village, which is an up-and-coming neighborhood with a lot of boutique shops and restaurants.

“So I saw it as a perfect opportunity to put a hotel brand there. There isn’t anything that exists like that in that neighborhood.”

From flophouse to fabulous

What did exist when he began work on the hotel were several smaller boutique hotels in the vicinity, including the Independent and the Alexander Inn. Both the Alexander, previously known as the Kesmon Hotel, and the Parker Spruce had reputations as flophouses of ill repute when their respective owners bought them. But unlike the old Kesmon, the Parker Spruce was a drag on the neighborhood.

“It was originally designed as a ‘gentlemen’s hotel,’ basically for bachelors,” says Rosenberg. “Then the neighborhood began declining and the type of guests changed, and before you know, it [had gotten to the point] where the police said, I think, they were pulling one dead body a month out of the building.”

“It was bringing the neighborhood value down by 10 percent or more,” Wankawala says.

To change that, Wankawala knew he had to erase the building’s past just as Alexander Inn owner Mel Heifetz did with the Kesmon. But unlike Heifetz, Wankawala wanted to pay homage to that past at the same time.

A nod and a wink to the Parker Spruce’s past

Which made for a bit of a design challenge, for Wankawala wanted his hotel to appeal to the broadest spectrum of travelers possible. “Mihir gave us a challenge,” Barber says. “He says, ‘Look, I want the traveling public. I want the mothers and the children, I want the female traveler, I want the gay traveler, I want the weekend warriors, I want everybody.’ So what motif do you use to reach out to that wide variety?” 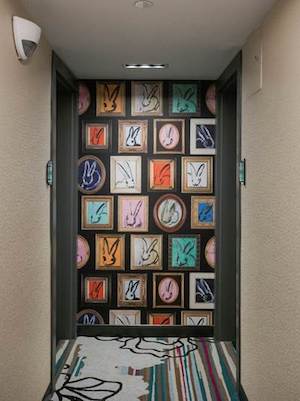 Barber found a unifying element in the work of modern artist Hunt Slonem. One of his signature works is a calligraphic rendering of bunny rabbits. Slonem, who painted these rabbits as a warmup in the morning, had already turned the image into a wallpaper pattern. And Floss Barber Inc. negotiated with Slonem to abstract the wallpaper design and turn it into “portraits” that hang in the elevator lobbies, hallways and lobby lounge.

The children who stay here will think the bunnies are cute. So will the grownups, but some of them — especially the locals who know this building’s history — might also think of something else that bunnies are known for.

Barber knew she made the right choice when a Marriott executive who had returned from Europe mentioned her stay at a hotel on that side of the Atlantic: “She said, ‘I saw that rabbit and I thought of the Parker.’ I thought, ‘Alright, alright, we got her,'” she says. “It’s an iconic image that you won’t forget when you see it.” 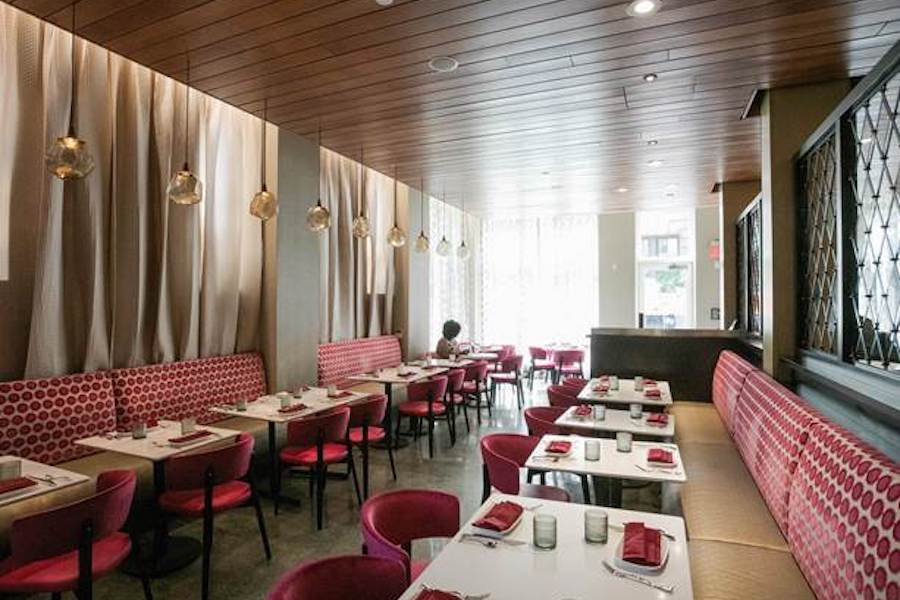 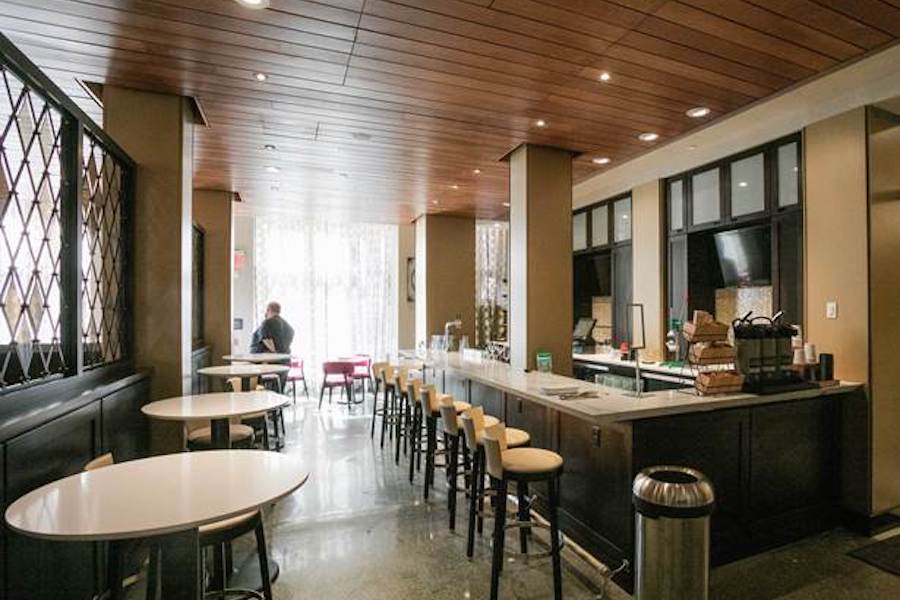 (Another nod-and-wink reference to the Fairfield Inn’s past can be found in Libertine, the Derek Davis restaurant that occupies the former Westbury Bar space. While the space itself is a little more restrained than the hotel lobby and hallways, it too recalls the Parker Spruce years in its color scheme and use of wood. As do the restaurant’s double-entendre name itself and its cocktail menu, where all the specialty drinks are named for notorious rogues and playboys. In the morning, Libertine serves as the space where guests can enjoy the hotel’s complimentary breakfast.) 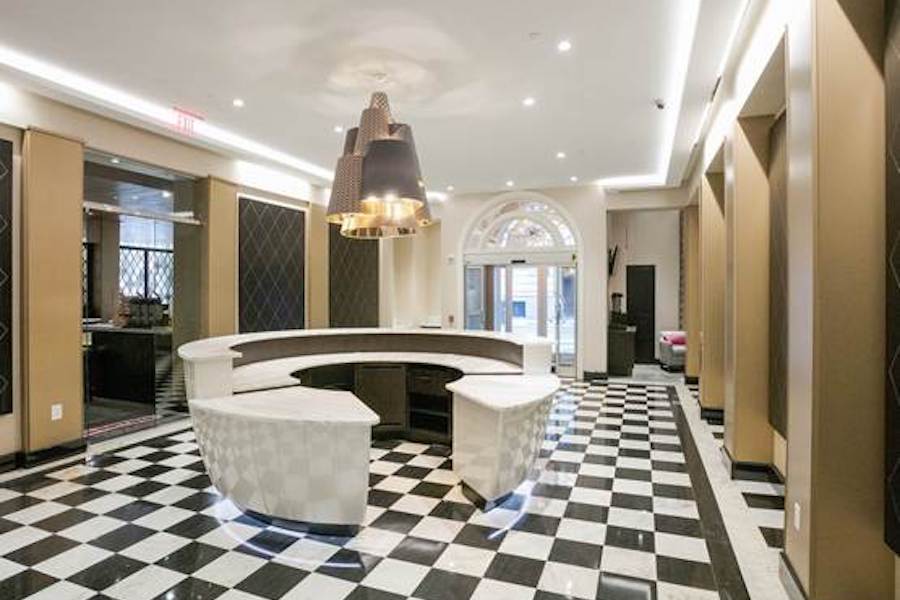 Restrained outside, exuberant inside

Visitors might be forgiven for doing a double take upon entering the lobby, for this hotel is a major departure for the Fairfield Inn brand. “It’s a select-service, mid-scale brand,” says Wankawala. Hotels at this level usually are not known for their design or their personality. But this place has it in spades. 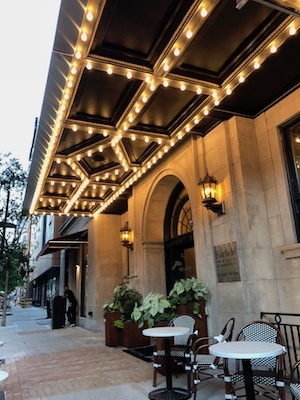 Some of that personality comes from the original elements preserved and restored in the reconstruction, like the checkerboard-pattern marble tile floor and the restored marquee. Rosenberg says that he and Barber saw this as a chance to mix things up.

“We saw this as an opportunity to introduce in the interiors a contrasting design and flavor and vibe to the exterior,” he says. “So the exterior remains this neoclassical facade, but when we go into the lobby, for instance, we see a modernistic mid-century tweaking of classical architectural elements using scale and color.

“And [in] the rooms upstairs, it’s a different change in design philosophy, where we have very artistic renderings of the corridors and the rooms.” 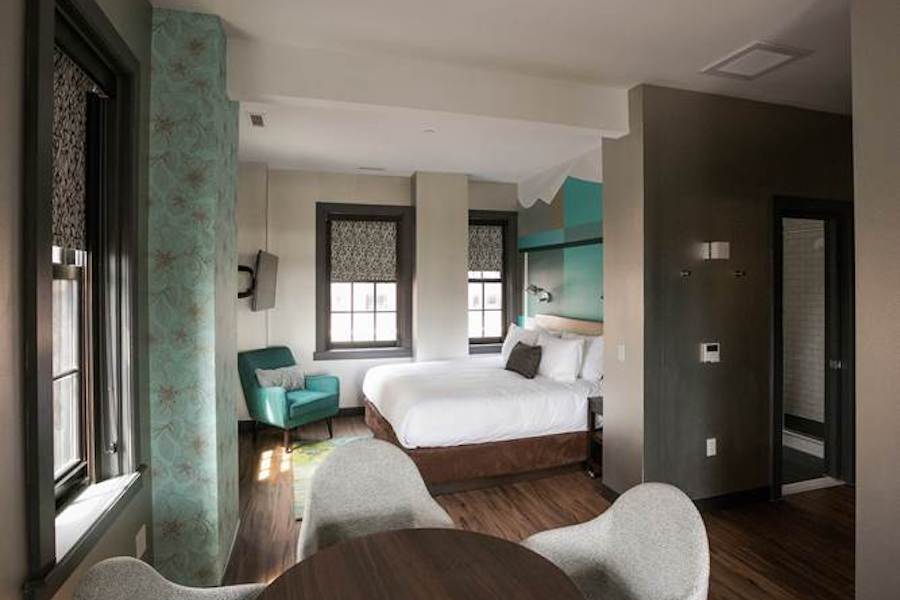 One of the king suites

Barber’s color scheme for the rooms is bold yet soothing, with its contrast of dark and light. Black is used to highlight the historically accurate replacement windows, while a mix of white, gold, gray and aqua in blocks and prints give the rooms an almost nautical feel. 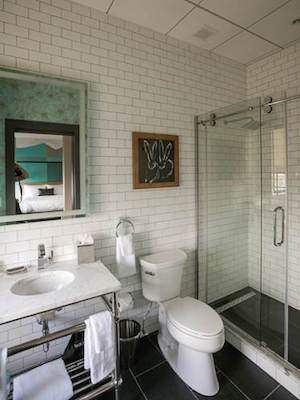 And you’ll find those bunny rabbits hanging in the bathrooms as well.

A room for every kind of guest

The hotel has 26 different room configurations in four types: king, queen, suite with king and sofa bed, and two twin beds. This, Wankawala says, means that just about any traveler can find a room to suit their needs to a T. Twin beds, common in Europe but a rarity in American hotels, have their place, say the designers: “If you’re Mom and Dad, you might put your kids next door,” says Barber. “Or if you’re traveling with your son to visit a university, you might not want to sleep with him; you’re going to bunk together,” says Rosenberg.

Another element that makes this hotel more flexible are the shared bathrooms that pair 150 of its roughly 200 rooms. Wankawala pointed out that these shared bathrooms also made it easier for bootleggers to do business during Prohibition. “If the police would come with a search warrant, they would have, let’s say, a warrant for room 911,” he says. “They could go to the bathroom and go to room 909, but they can’t search that room, so they would just walk on through.”

Not only does the building have a past. The Fairfield Inn & Suites Philadelphia Downtown/Center City is also something of a “proof of concept” for Marriott and a possible template for the midrange hotel of the future. “Marriott ‘allowed’ us to push the envelope for Marriott Fairfield,” Barber explains. “If you look, for example, at the Fairfield in D.C., it’s pretty generic, it’s pretty vanilla. But we actually have a boutique hotel under that brand.

According to Wankawala, visitors are pleased with it too: bookings started out fairly strong, at 60 percent occupancy when it opened in mid-June, and have been rising since. The overwhelming majority of guests who have left reviews on Marriott’s website love the hotel, even if they comment about the small rooms.”I have never stayed in a hotel with such character and fun,” writes one guest. “Looks nothing like what you think a Fairfield Marriott would look like,” another writes. “Now looks like a unique boutique hotel rather than a chain hotel. They did an excellent job with the decor.”