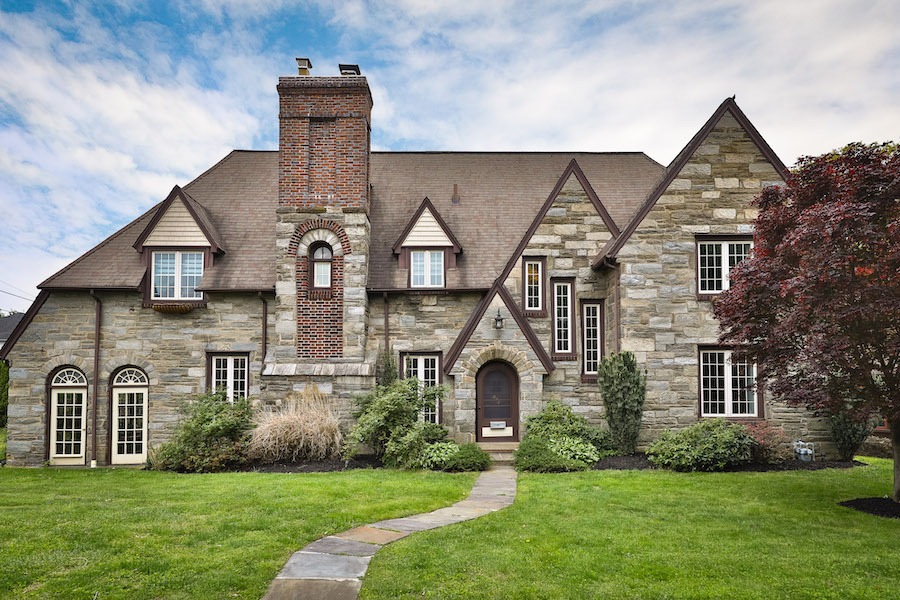 One look at its front elevation and it should be clear that you’re looking at a one-of-a-kind Tudor Revival house at 624 Childs Lane, Drexel Hill, Pa. 19026 | Photos: Gary Schempp via Elfant Wissahickon Realtors

Besides being the most populous township (and the sixth-largest municipality, period) in Pennsylvania, Upper Darby is one of the Philadelphia region’s most ethnically, culturally and socioeconomically diverse municipalities to boot. Of late, many have come to think of the community as a somewhat faded gem, following the rise, fall and possible rise again of its “downtown” around 69th Street Terminal, but that view of the township glosses over the many sparkling gems still in it.

The Drexel Hill section of the township is one of those gems. Comprised of several distinct neighborhoods, it’s the boskiest and most affluent part of the township.

Drexel Hill took its present form in the 1920s, a time of widespread prosperity amidst a go-go economy like that of the 2000s. Following the trolley lines out from 69th Street Terminal, the area filled with gracious Colonials and one of the largest concentrations of Tudor Revival houses in the region.

Those Tudor dreams make up much of the housing stock in the section of Drexel Hill known as Addingham. That’s where you’ll find this distinctive Drexel Hill Tudor house for sale. It dates to 1927, two years before the stock market crash brought that go-go era known as the Jazz Age to a screeching halt.

The neighborhood traces its roots to the 1700s, when a series of mills popped up along the banks of Darby Creek. These mills became part of the nation’s burgeoning textile industry, and their workers lived nearby, often in tenement homes owned by the mill owners. One of these mills became the nucleus of a village called Heyville. By the dawn of the 20th century, it had been renamed Addingham, after a small village in England. And it was at about that time that it played a role in the birth of another industry: pioneering filmmaker Siegmund Lubin chose to shoot hundreds of his early motion pictures along the banks of Darby Creek right next to the Addingham mills.

The mills survived until the Great Depression, but by then, the area upland from them had gotten a good bit tonier, as this Drexel Hill Tudor house for sale should indicate. The area welcomed the Aronimink Golf Club to it in 1913 as the new middle class of the day filled these houses.

And what houses they were — and are! Since this article first appeared, we have been able to obtain professional photos from the agent marketing this house. The new photos will give you a better idea of just how big a gem this particular Tudor Revival house is. 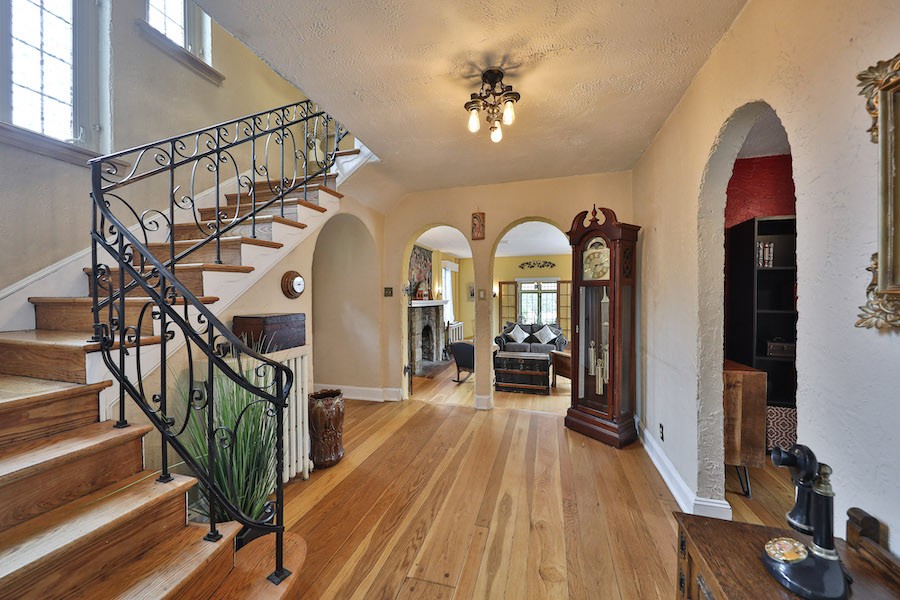 This one contains all kinds of stylish features inspired by not only ancient England but also the Art Deco movement. Its influence becomes most evident in the curlicued “pig iron” stair rails in the house’s two-story-high main stair hall and the similar iron gates that grace the doorways leading from the foyer to the sunken living room. 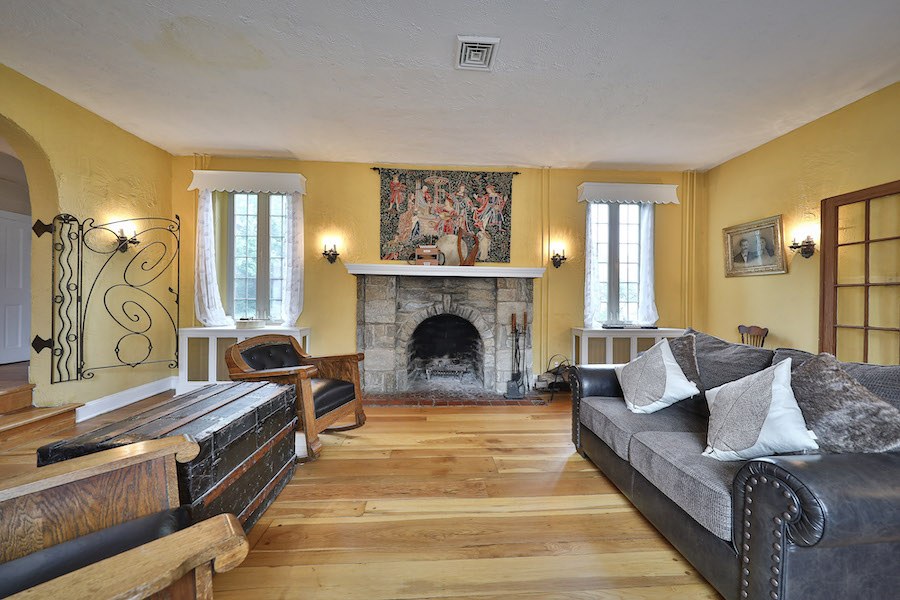 This house has been well cared for over the years. Its hardwood floors sparkle with a high gloss, its woodwork and trim are likewise in great shape, and the wood-burning stone fireplace in the living room is still operational. 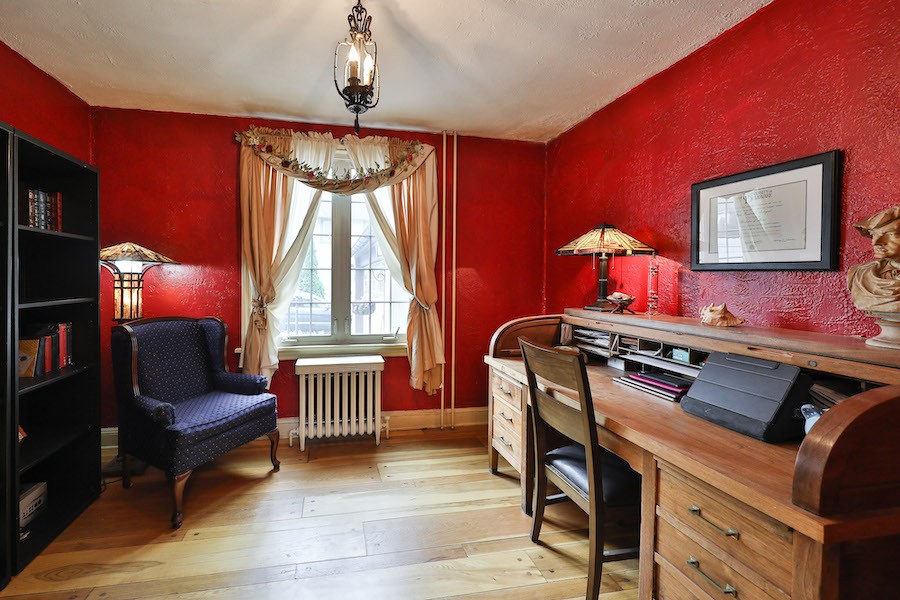 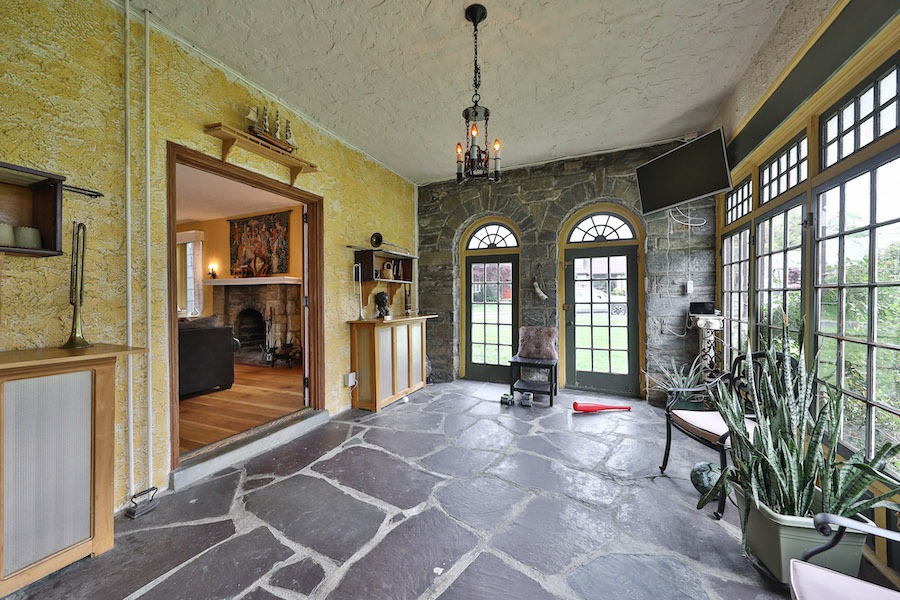 The sunroom beyond the living room has a heated floor that makes it a four-season space to soak in the sun. Glass doors lead from it to a comfortable covered porch and nicely landscaped and manicured back and side yards. 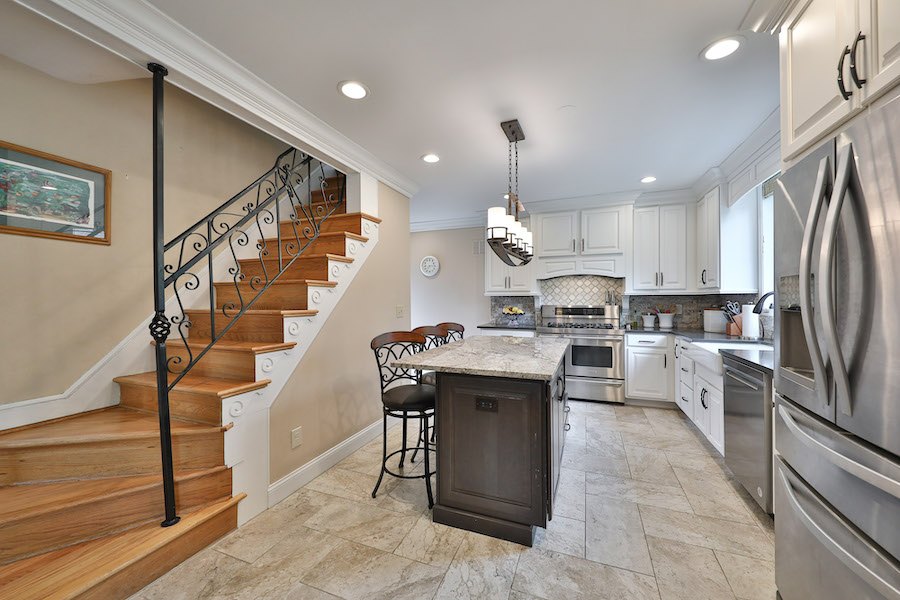 And while its bathrooms could use some updating, its kitchen got a recent makeover that brings it up to 21st-century standards. Both the door from the kitchen to the backyard and the rear staircase got custom ironwork in the spirit of the original in the process. 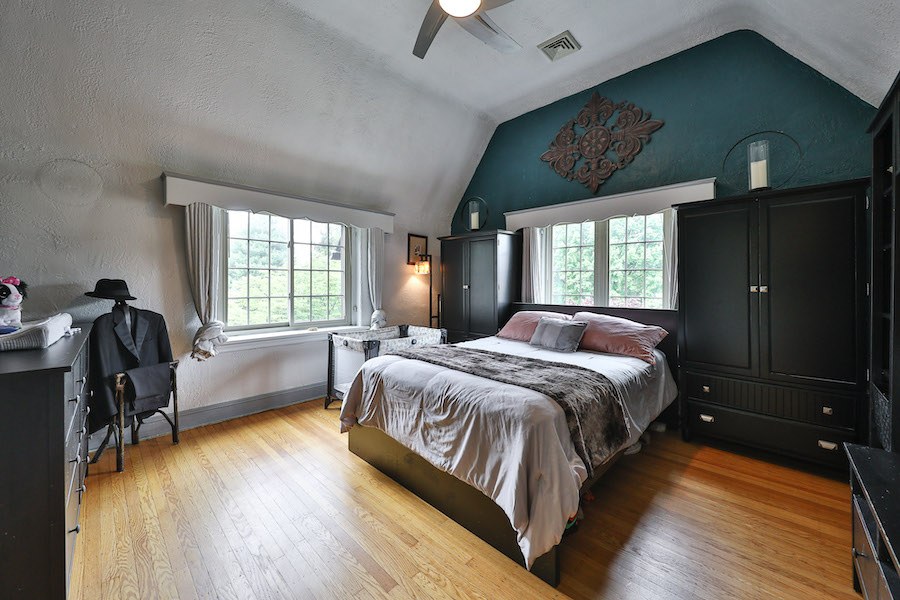 So did its heating and hot water system. The old oil burner and water heater have been replaced by a tankless Navien gas “condensing combo-boiler” that furnishes heat and hot water on demand, saving beaucoup bucks on your energy bills. 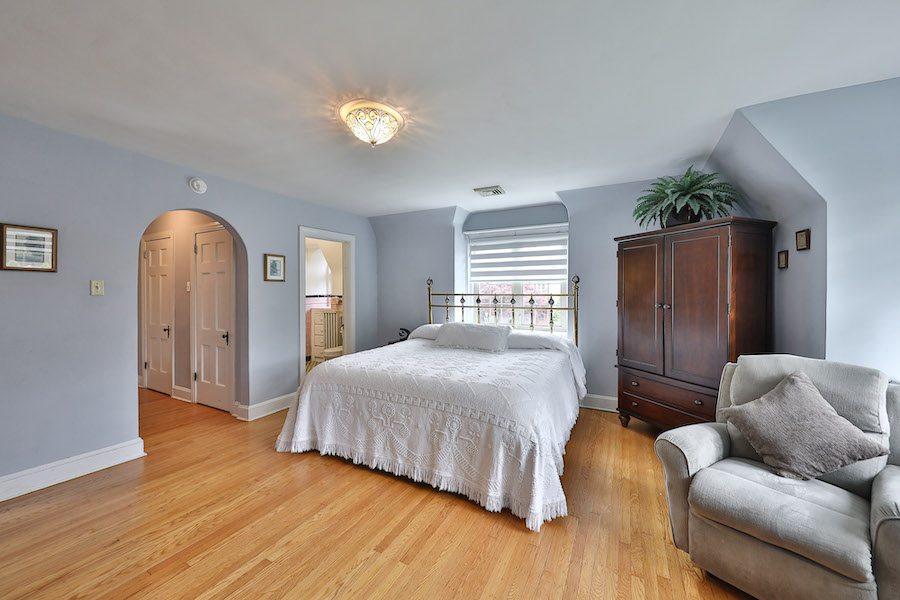 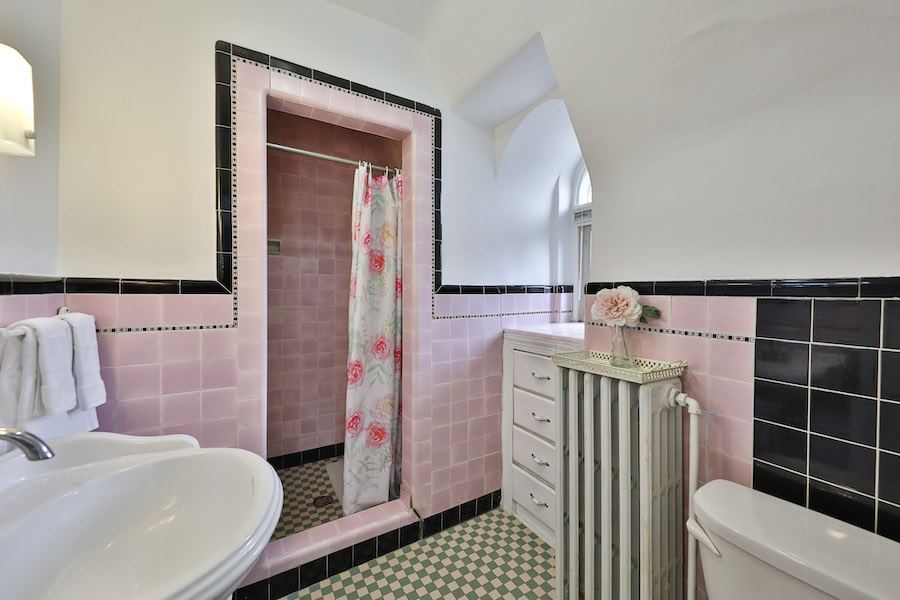 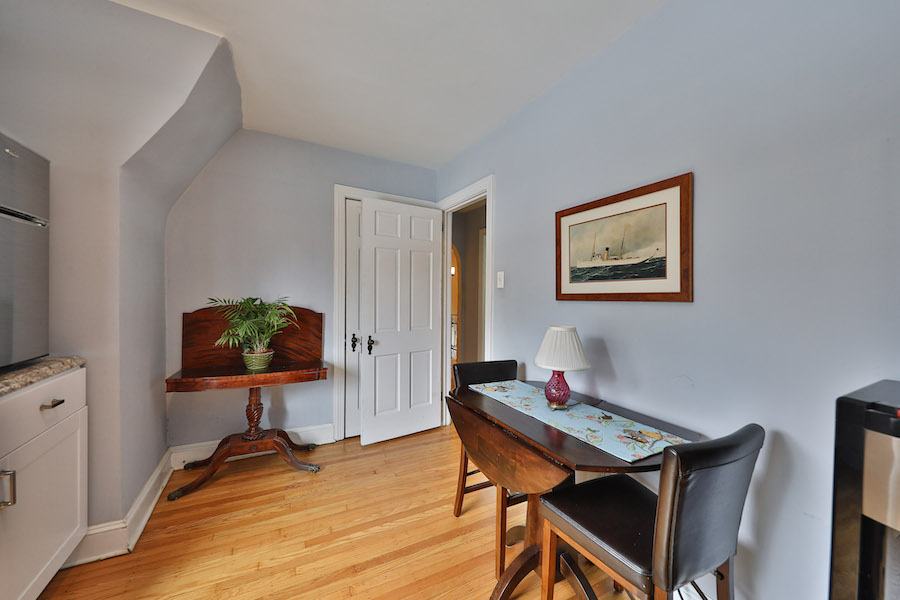 Other distinctive features and details include a vaulted ceiling in the second-largest bedroom, a master suite with en-suite bathroom and anteroom that could be used as a dressing room or study, and leaded glass windows in several places, including the main stairwell. 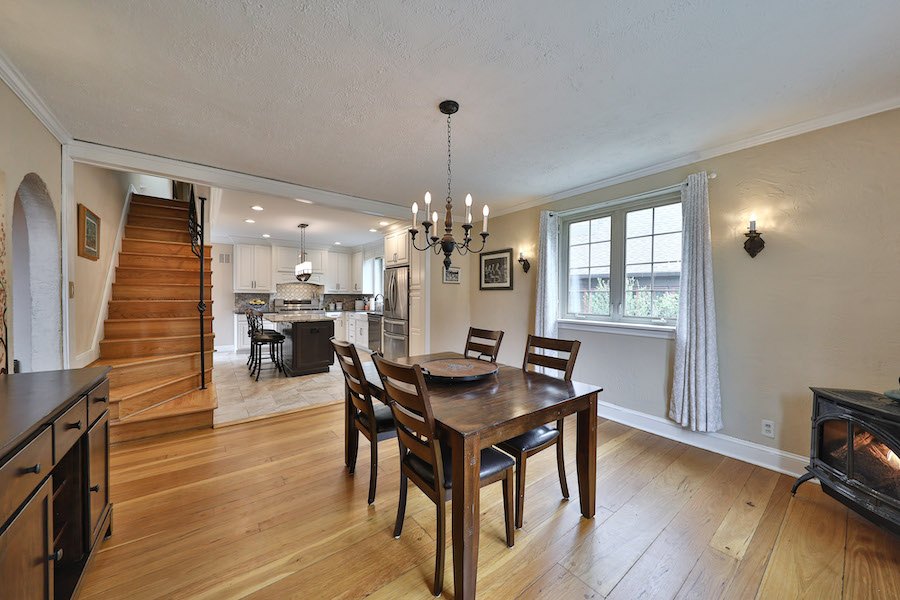 Now that real estate sales have been included among the “life-sustaining” activities, you can now schedule one-on-one walkthroughs with the agent, who’d only be more than happy to show you this truly unique house. 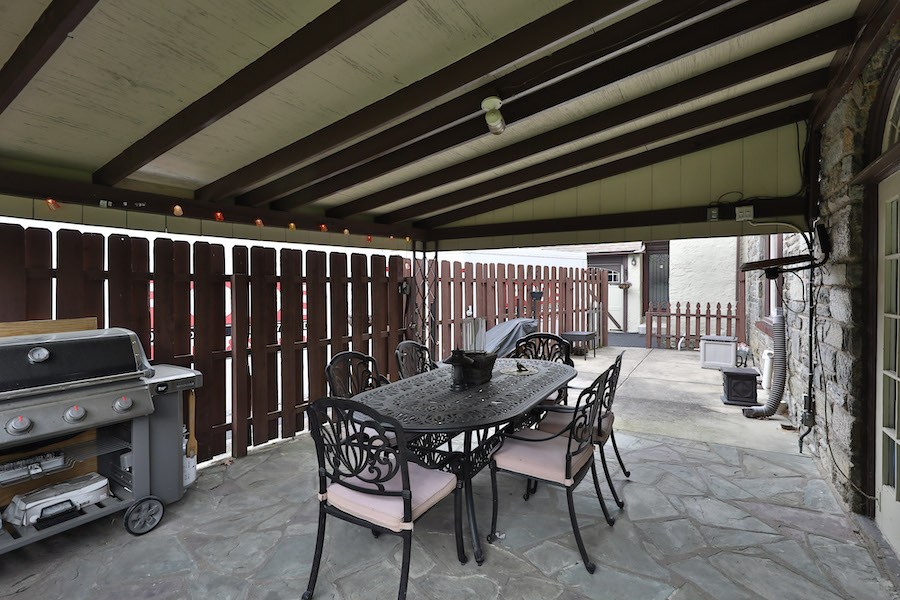 And she’d be glad to share with you the history and convenience of this southwestern corner of Upper Darby. This Upper Darby Tudor house for sale is just a few blocks’ walk from the Aronimink station on the Media trolley line in one direction, and in another, you can stroll through the land where the mills stood and where Lubin made his movies on the way to Indian Rock Park.

Across Darby Creek from the park lies the former Aronimink Golf Club, whose clubhouse still stands as a banquet and conference center. After the club moved to its current home in Newtown Square in 1928, it lay fallow until a developer turned it into the master-planned apartment community we know as Drexelbrook in the early 1950s. The Drexeline shopping center lies one trolley stop past Drexelbrook and a short drive away from your home.

Put all this together and you have a very attractive package: An absolute charmer of a house in a convenient location in a neighborhood full of history at a reasonable price. I’d even say this place is worth paying Upper Darby’s relatively high property taxes to live in, because you’ll have so much more than the township’s current popular image would lead you to expect right at your doorstep or just beyond.

OTHER STUFF: The owners made a bunch of other upgrades to this house’s systems and structure; ask the listing agent for details.