Part modern, part Mediterranean, part medieval and part neotraditional, this house with three lives may well be the first postmodernist building in the country.

Those who know real estate agent Marion Dinofa of BHHS Fox & Roach Realtors’ Main Line marketing center know that she has a special affinity for midcentury modern houses. Her main website, “Philadwellphia,” showcases the most outstanding specimens that she has been chosen to market.

Which means that when she pitches a house she’s marketing, it’s sure to be at the very least exceptionally attractive. And it just might have an interesting story behind it too.

This midcentury modern Chestnut Hill house for sale certainly has one. But first, I need to get one small detail out of the way:

Appearances to the contrary notwithstanding, this isn’t a midcentury modern house. Instead, it’s the third edition, revised and annotated, of an 1880 Victorian mansion.

And the architect who created the third edition unwittingly produced what can only be called the first postmodernist house in America.

To understand how this came about, we should go back to the beginning, when the house you see above looked like this: 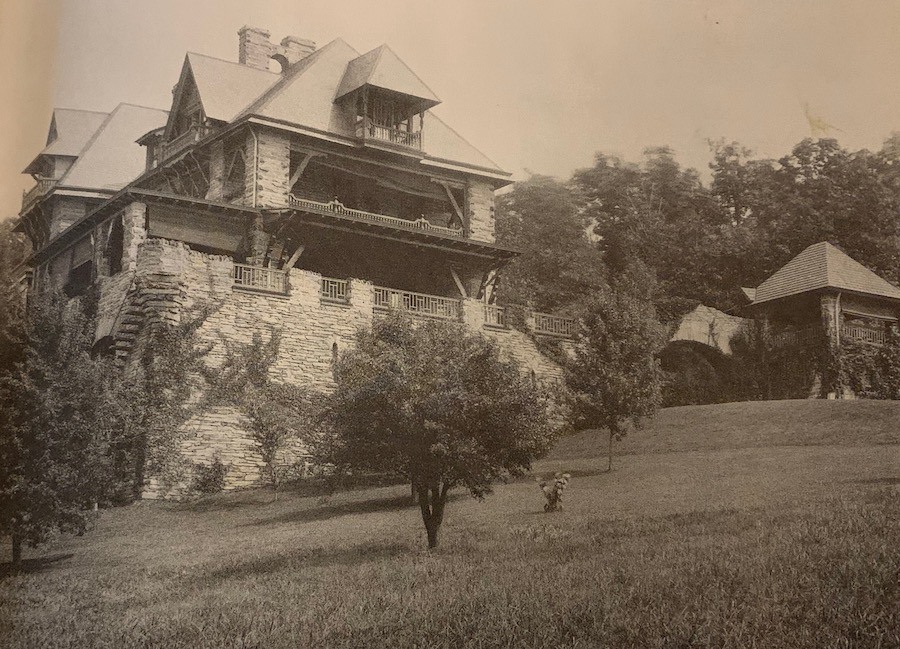 Photo of Stonecliffe as it appeared in the early 20th century. This is the house’s northwest side; the view in the color photo above is looking to the north

This was “Stonecliffe,” a grand mansion designed by noted local architect Theophilus Chandler and built in Chestnut Hill’s upper reaches in 1880-81 for a gentleman named T.M. Stewart. For most of its existence, however, it served as the home of Charles Taylor. Articles of the day described it as “remarkably picturesque,” and its location near the crest of a hill on ten acres of land gave it both privacy and unrivaled views. 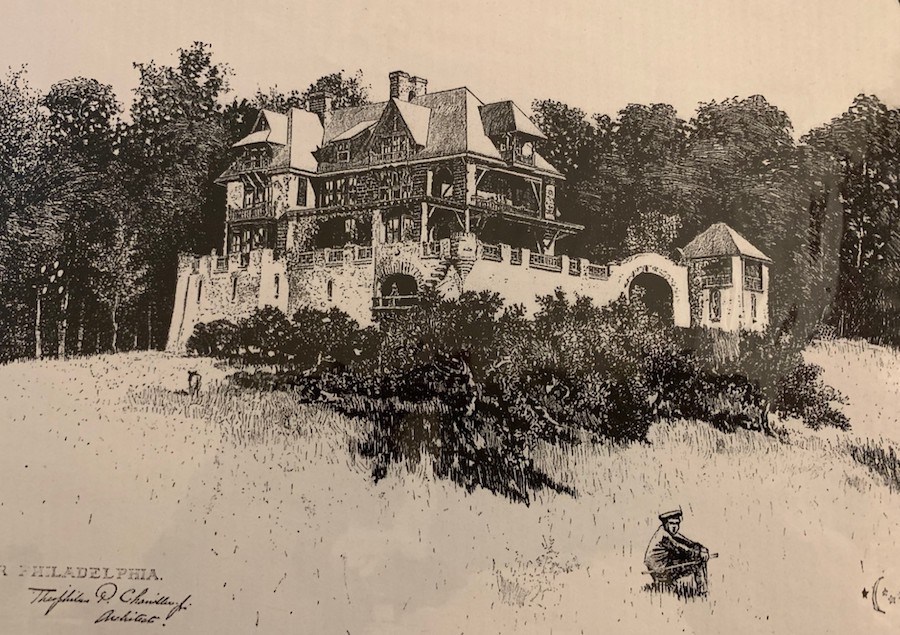 Drawing of Stonecliffe by the architect. The bridge connecting the main-floor terrace to the gazebo on the other side of the driveway survives, but the gazebo was removed to provide parking space for visitors.

The illustration above makes it clear what allowed the house’s subsequent transformations to take place. In this view, the house sits atop a foundation that resembles a medieval castle; all it lacked was a moat.

The Taylors and their children lived here until sometime in the early 1920s, when the mansion was consumed by fire. This is what it looked like after that: 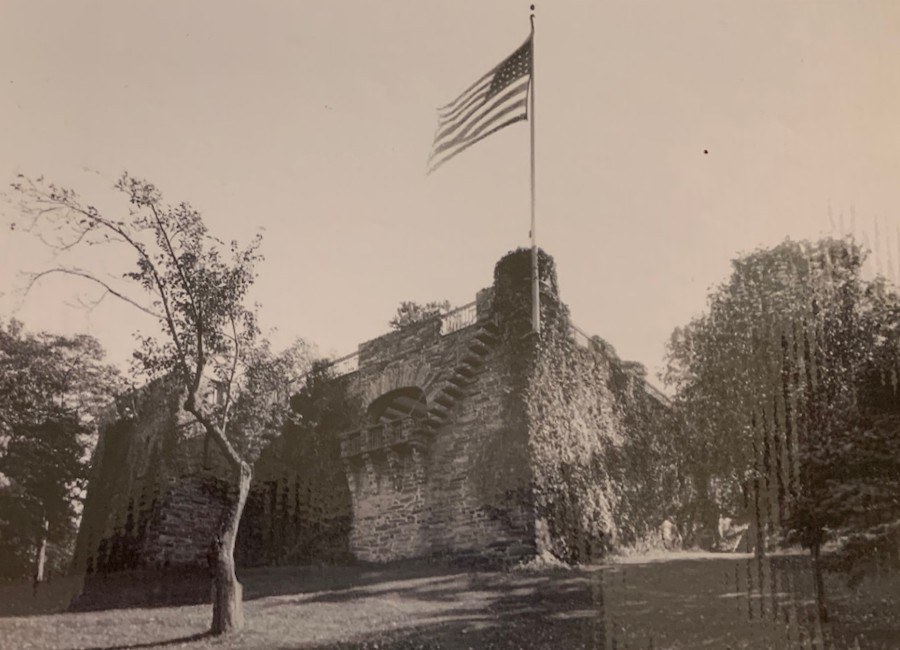 Stonecliffe’s foundation after the fire 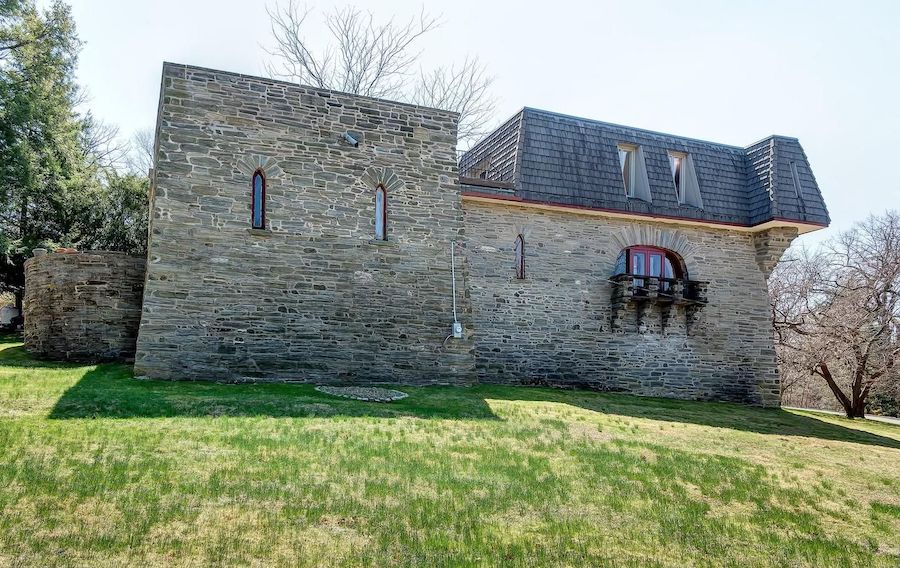 The northwest elevation as it now appears

By then, Taylor’s daughter had moved to a newer house on the estate called “Greylock,” which Charles had built for her as a wedding present. (This house still stands at the end of the narrow lane that connects Caryl Lane to Norwood Avenue.) She turned the ruined house’s foundations into a swimming pool, with changing rooms inserted within the foundation’s walls: 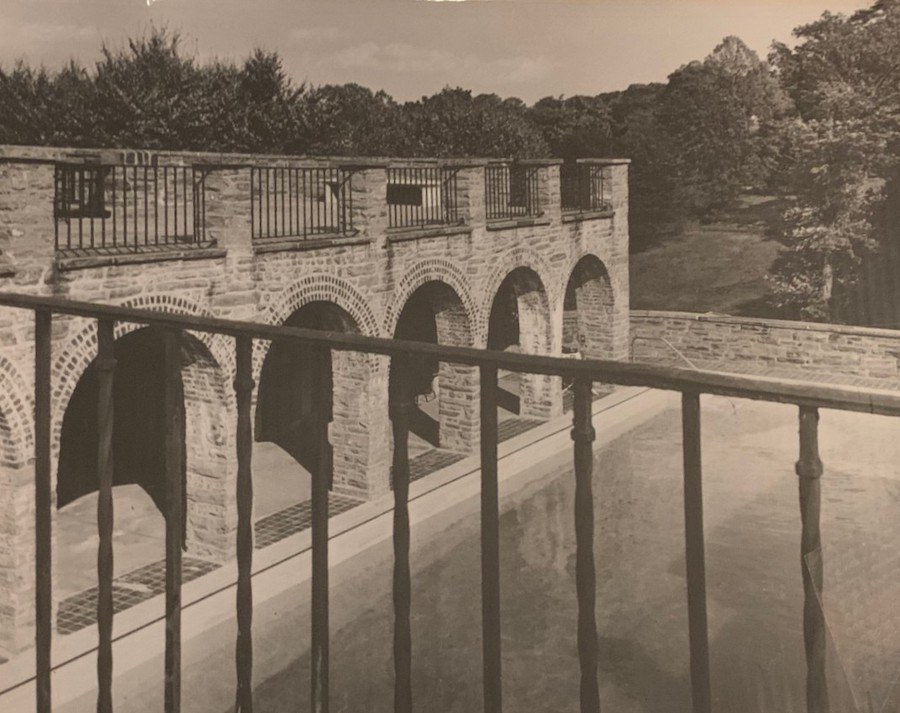 View of pool from roof deck

And this was what Stonecliffe looked like until 1971, when architect Richard Martin bought the property. He decided to build a new house within and atop that foundation. Viewed from the original house’s entrance driveway, it looks something like a 1970s garden apartment building or suburban bank branch, with a deep mansard roof covered with cement roof tiles. Those were popular in Florida, where Martin lived before buying this house. 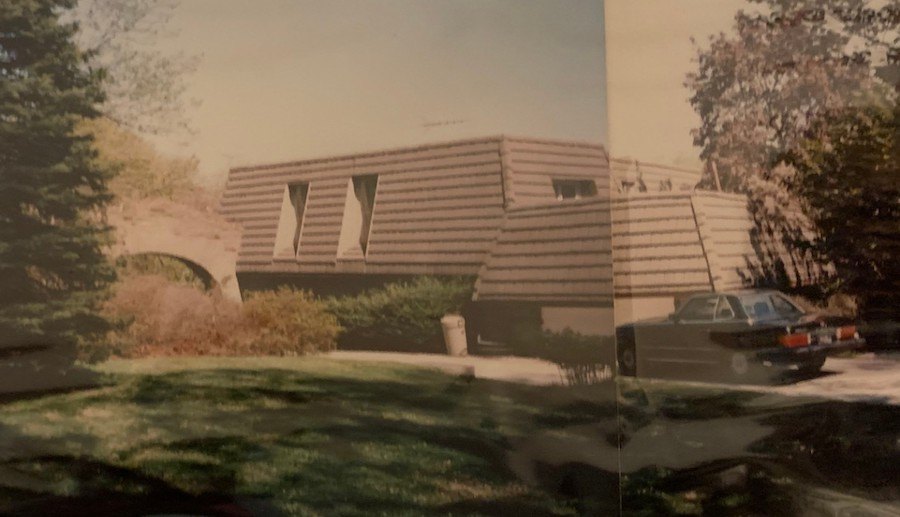 The house Richard Martin built on top of the foundation in 1971, viewed from the entrance driveway | Photo: Collection of the owner

What you see today is the house Martin designed and built, with some key alterations made since then by the architect who bought it from Martin. (The owners have requested anonymity.)

The biggest of the alterations made it look less ’70s suburban and a little more Mediterranean. The new owner, wishing to be able to see over that barrier, dismantled the tile roofs surrounding the two remaining decks. To his surprise, he found that one of the roofs covered the staircase leading to Stonecliffe’s front door. 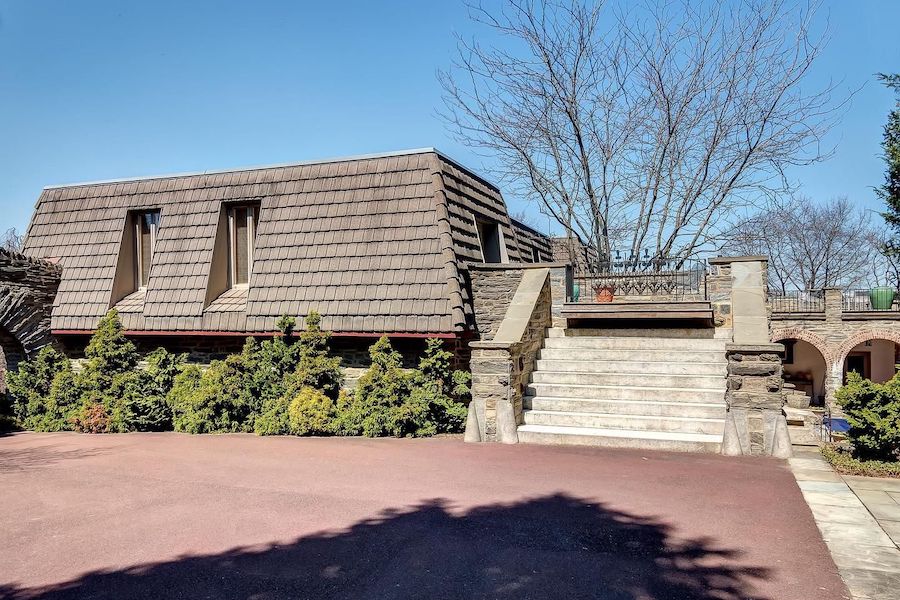 The front of the house as redone by its current owner. Stairs to the right of these lead down to the front entrance courtyard and pool.

That staircase today leads to a fixed-in-place wrought-iron railing that encloses the private deck off the master bedroom. This means, however, that you can welcome visiting guests even before they reach your front door if you happen to be out on your private deck when they arrive. 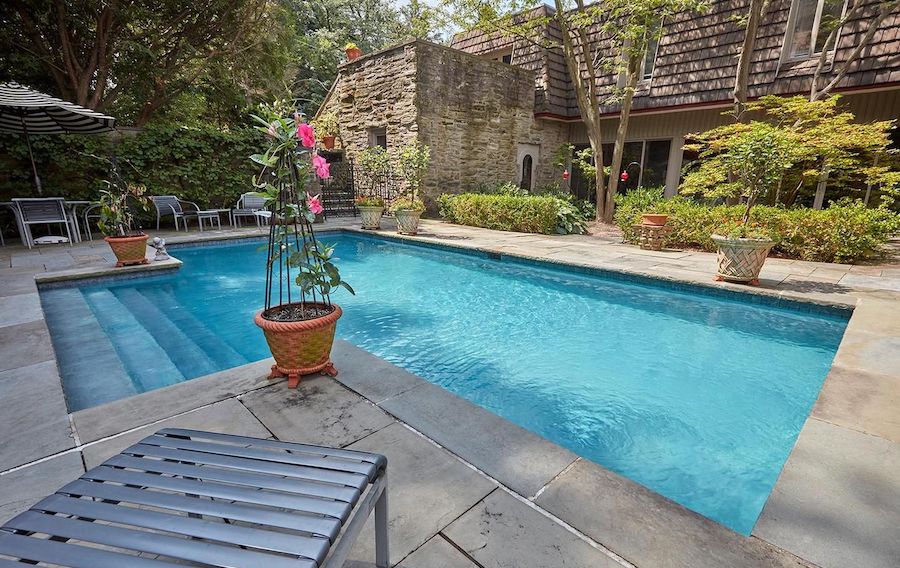 When they arrive, they will walk past the swimming pool in the house’s courtyard to get to the front entrance. In so doing, they will be walking over what had been the middle of the original pool. Martin left this pool intact when he built this house; its deep end lies beneath the living/dining room and serves as a basement storage area. The pool’s current design and landscaping is also the work of the current owner. 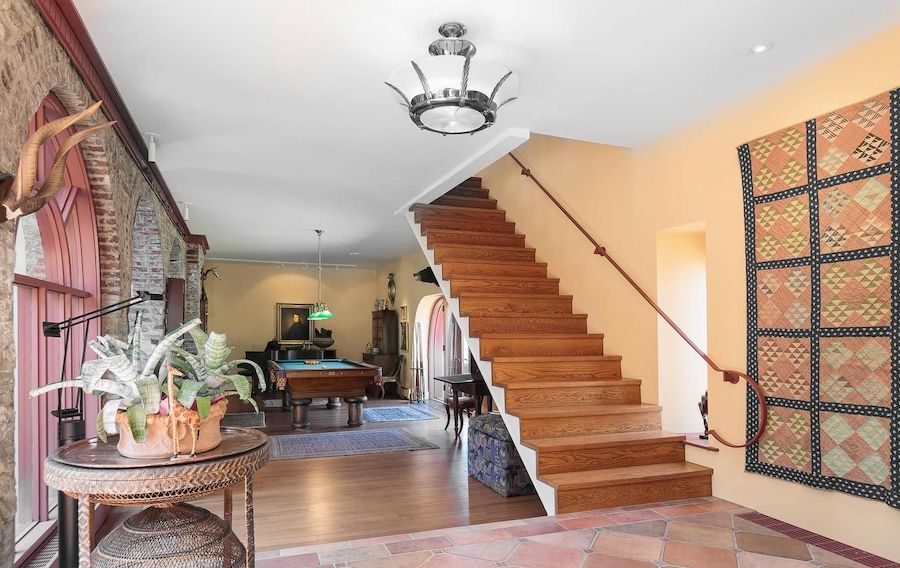 Once inside, you will find a house where multiple styles and influences coexist in harmony. That should be evident the moment you enter the foyer, which features an open floating staircase to the upper level, large fan-light windows in the arches, and a vintage billiard table and a mix of contemporary and neotraditional lighting. 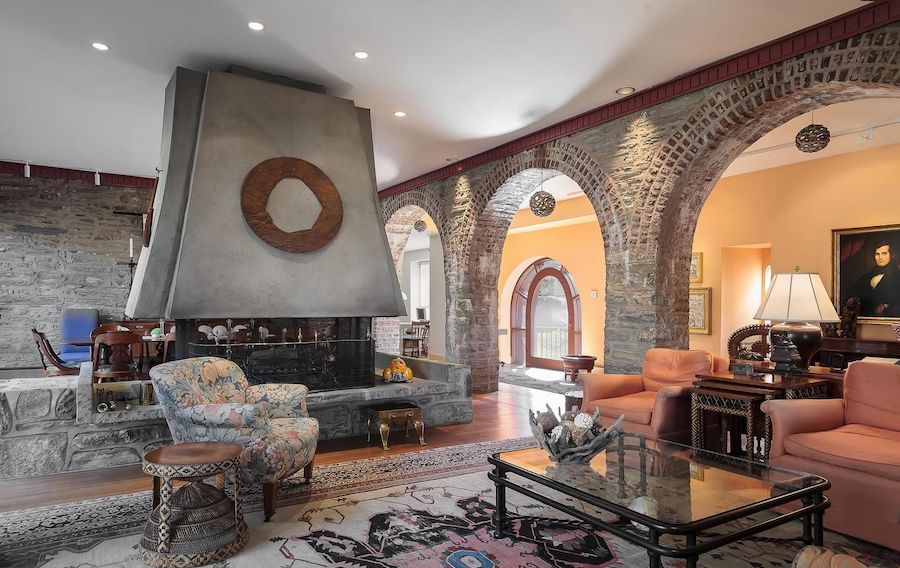 The stone walls and arches give the house’s main living area a medieval feel while its ample and simple windows, recessed lighting (another alteration added by the current owner) and island fireplace add distinctly contemporary touches. 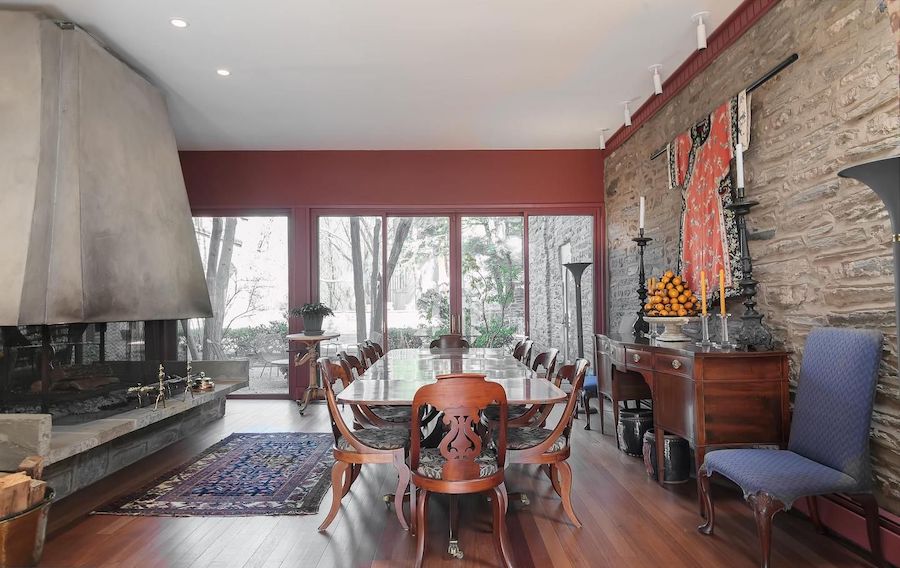 Something Martin hadn’t figured out, though, was that the completely open fireplace meant the fire didn’t generate enough of an updraft to prevent the living/dining room from filling with smoke. You can find traces of soot in the above photo of the dining room, taken a few years ago; the soot has since been removed. A vent fan in the chimney now provides the updraft and the soot and smoke are gone. 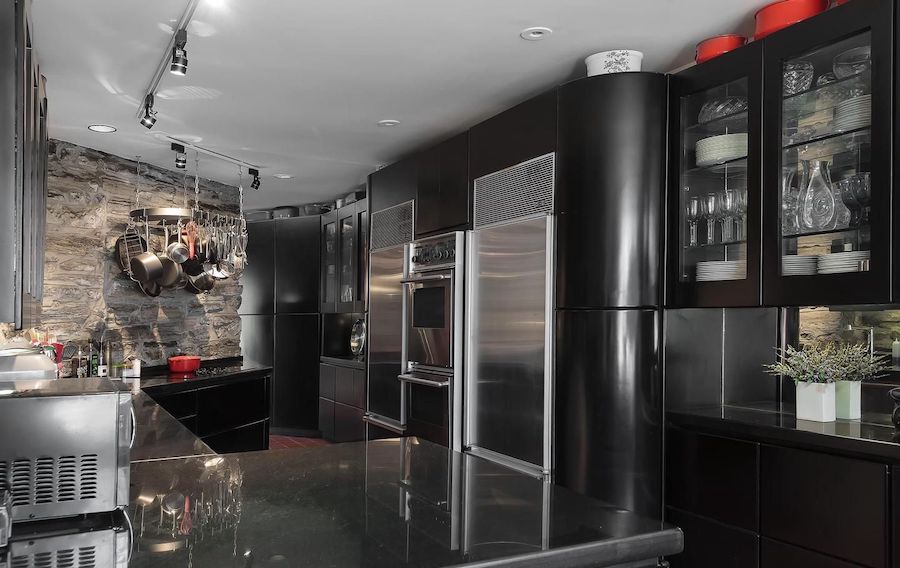 That medieval/contemporary mix also manifests itself in the kitchen, where black Moderne cabinets play off the gray stone. The refrigerator/freezers and ovens in the photo above have been replaced with a new Thermador refrigerator on one side, a new Thermador freezer on the other, and a double Wolf oven in between. 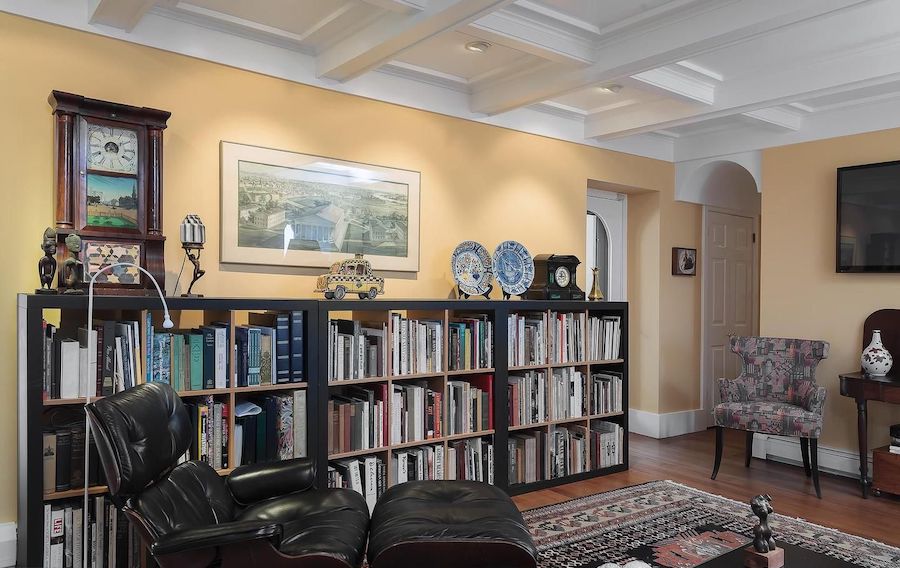 The most medieval of the main-floor spaces is the coffered-ceilinged upper den, located in the original foundation. It features two Gothic slit windows of the kind medieval knights used to shoot arrows at advancing attackers. This space had housed two changing rooms during this house’s years as a pool. 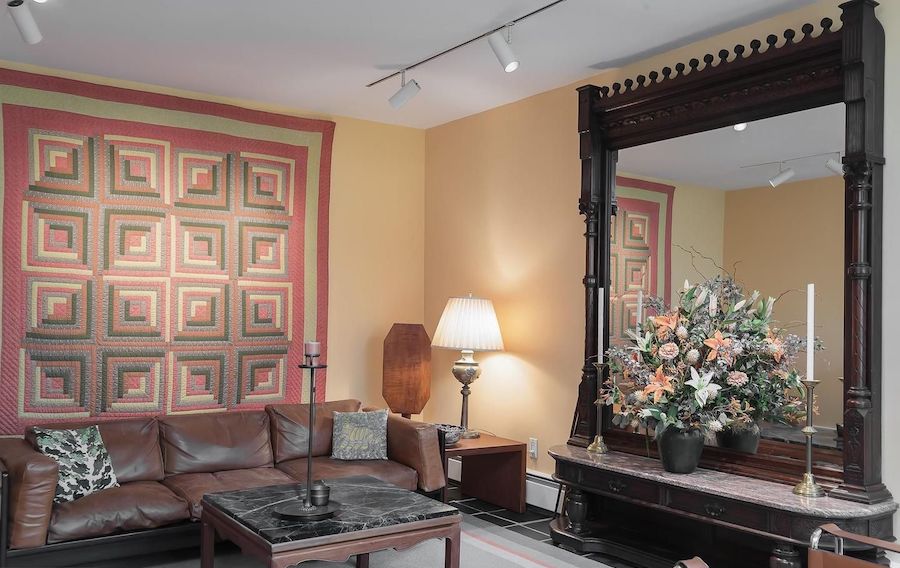 A spiral staircase leads down from this space to a lower-level den with no other connection to the rest of the house. Its windowless nature makes it an ideal place to simply retreat for work, study or contemplation. 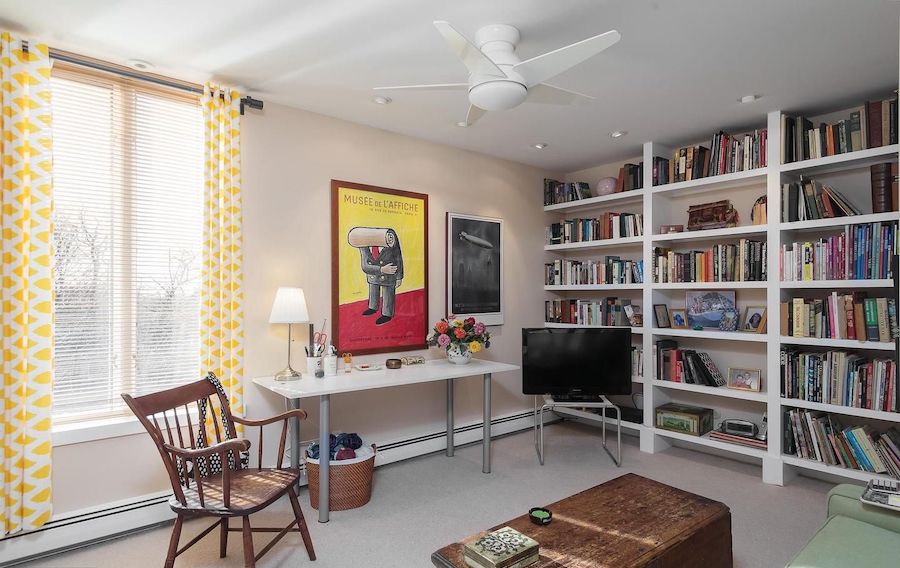 Upstairs are five bedrooms, one of which currently serves as a study. The bedrooms are arranged around a neotraditional corridor, two to a side with a hall bath adjacent on each side. 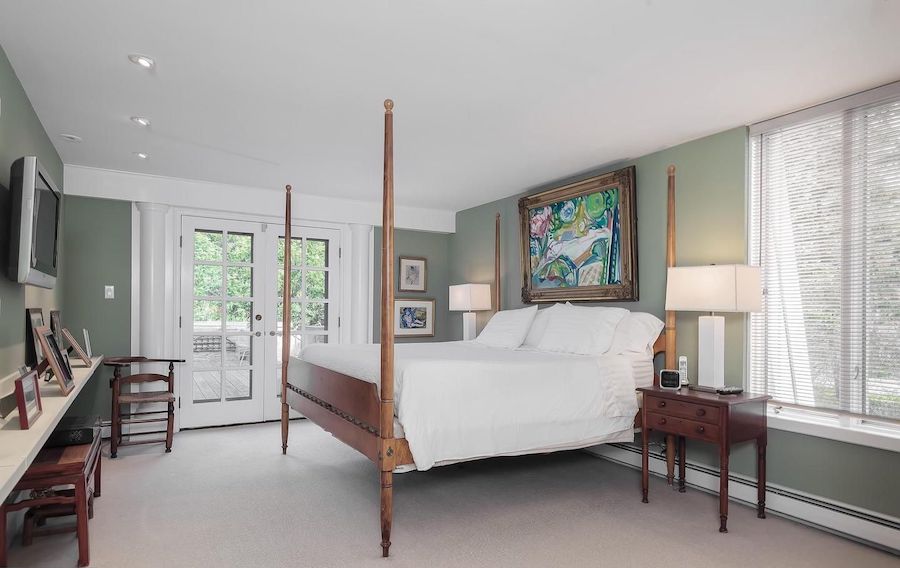 The master bedroom lies at the end of the corridor. French doors connect it to the private deck. 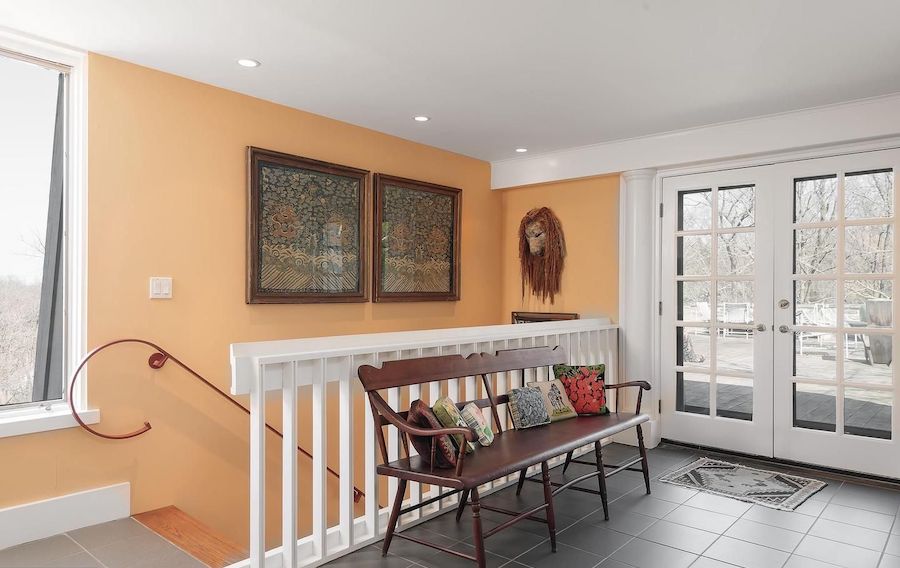 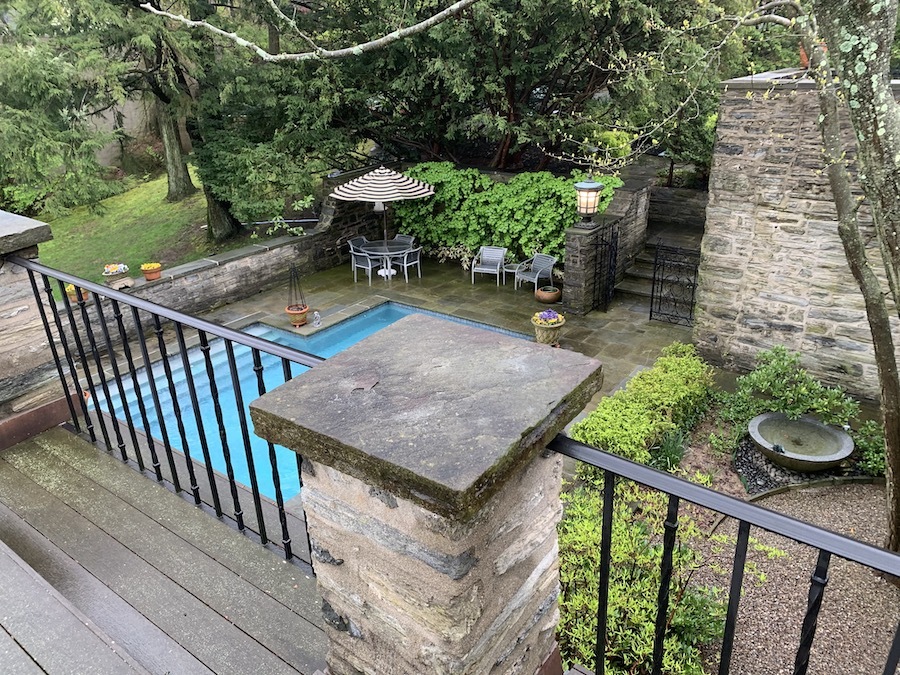 The public deck sits at the top of the stairs from the foyer, with a sitting area next to its French doors. 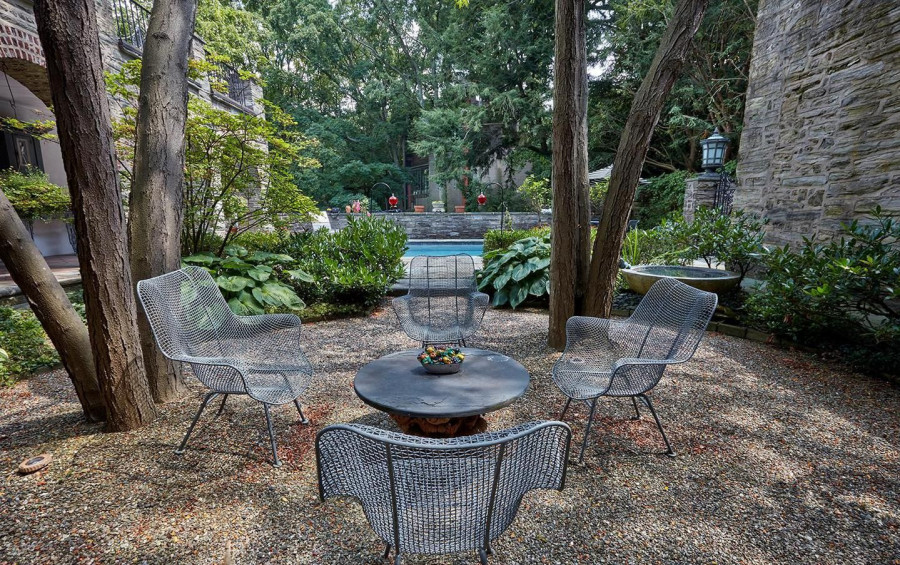 And while the Stonecliffe estate was subdivided many years ago, no fences went up between the house lots. This means that you enjoy a park-like view, just studded by houses, from both the decks and the balcony next to the billiard table.

Thus we bring to a close the three chapters of this singular house’s story so far. You now have the opportunity to write its fourth.