A First Look at the Pod Philly Hotel

The new hotel off Rittenhouse Square is designed for travelers who are here to experience the city, not their hotel rooms. 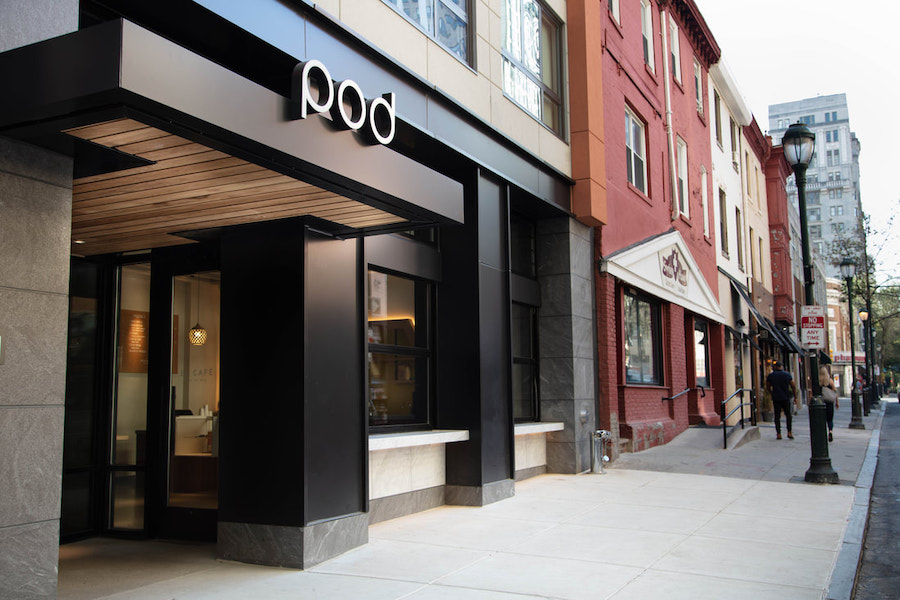 The entrance to the Pod Hotel on 19th Street just below Market. | Photos: Pixellab via Pod Hotels

Not all travelers can be classed into two types, but we can perhaps define two ends of the travel market.

We’ll call one end the “luxury” end. These are the people for whom their hotel stay is, if not the reason, then one of the big reasons they took the trip. Whether at a vacation resort or in a destination city, these travelers want their hotels to have the best of everything, including extra pampering. Of course, these hotels come with premium price tags.

At the other end are the “just the basics” folks and the “adventurers.” These people are traveling to either get business done or experience the place they’re visiting. They’re probably not likely to order room service or use the minibar in their hotel rooms (especially not at those prices). They’d be just as happy if their hotel room consisted of little more than a place to rest their heads at night, and if they’re going to spend time in the hotel at all, they’ll be hanging out at the lobby bar or the café with other visitors and the occasional local.

And it might not have come to be at all were it not for a fortuitous accident in Chicago.

A concept born of necessity

“I got interested in micro-hotels when I was visiting a project in Chicago,” says Aaron Katz, CEO of Modus Hotels, the Washington-based operator of what Katz describes as “lifestyle hotels.” The project, which sought to convert an existing concrete building into a hotel, had rooms too small to accommodate the fittings for a standard 300- to 400-square-foot hotel room.

“It was accidental, trying to fit a concept into a building rather than having a grand vision beforehand. But then I looked around and got wise to the micro-space, which is very interesting.

“If you can provide a traveler with a room that gives the traveler everything they’re interested in and everything they need — you focus on the bathrooms, showers, bed, and give them some workspace — and you make the public spaces places where people can commune, and make them someplace special, then you have the recipe for what people are looking for in a hotel experience.” 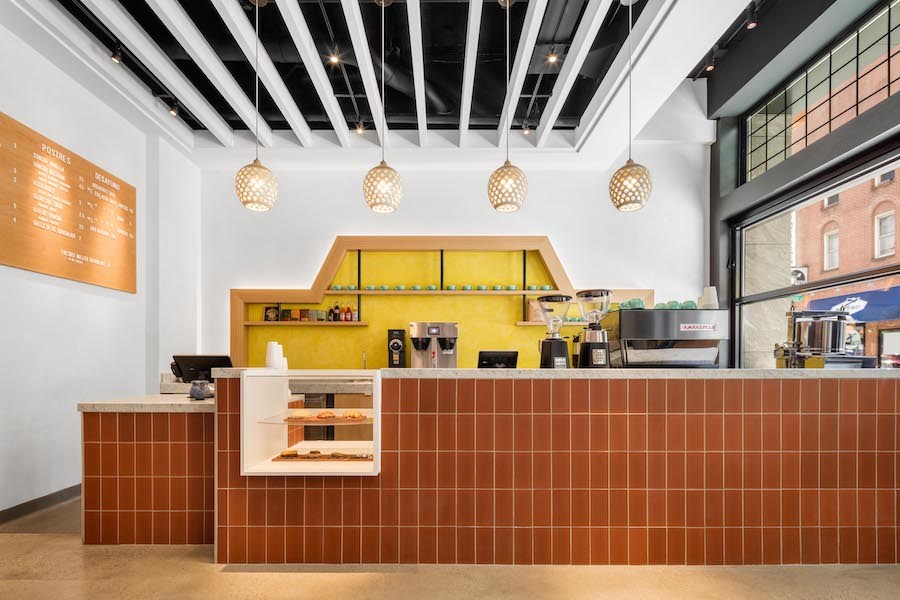 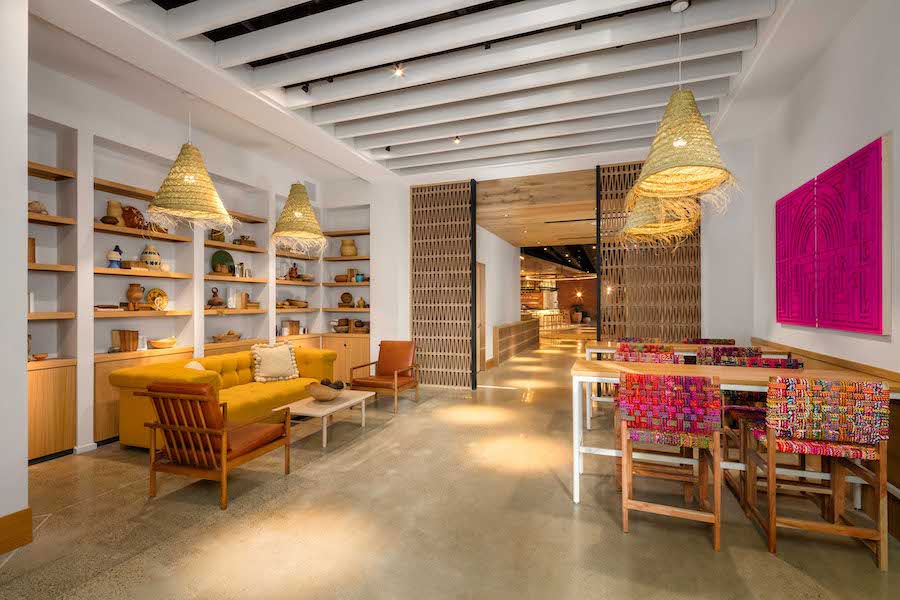 …both of whom can also relax with their coffee and pastries in the seating area just past the check-in and concierge desks. The trip to the hotel elevators from the entrance passes through this space; you can see the Condesa bar beyond the elevators in the distance.

The lobby is the cafe is the restaurant

The importance of the public spaces becomes evident the moment one walks through the hotel entrance on 19th Street. No wall or divider separates the check-in and concierge desks from El Cafe, the coffee shop, which has its own separate entrance from the outside as well. The activity in the latter space spills into the former, and guests pass through the cafe seating area on their way to the hotel elevators. 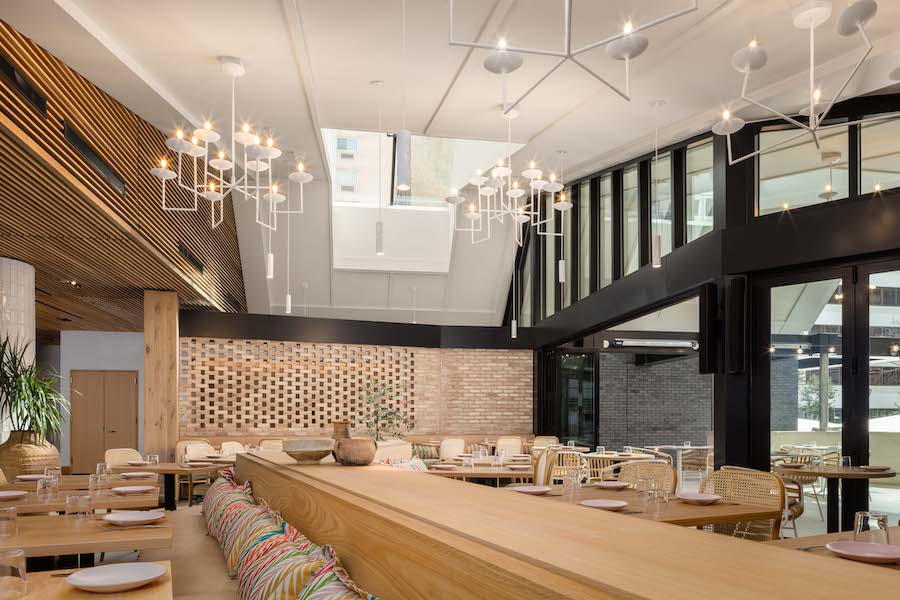 The Condesa dining room, which opens to outdoor terrace seating, has its own entrance on Ludlow Street as well.

It does the same thing at Condesa, the Mexican restaurant just beyond the hotel elevators. Again, there is nothing to indicate that you’ve left the hotel lobby and entered the restaurant, and even the restaurant space blurs the line between the dining area, the bar and the array of tables next to the bar that guests (and locals) can use as co-working space. That space, in turn, merges with a conversation area centered around a fireplace; turn to the right rather than the left when you reach the restaurant and it stares you in the face. 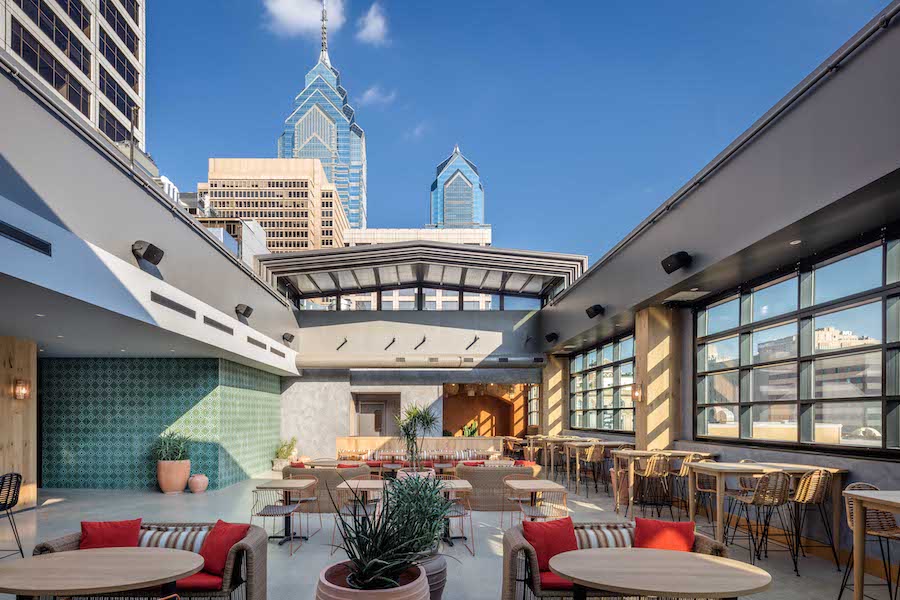 When the weather’s nice, the roof at El Techo (Spanish for “the roof”) retracts so patrons can enjoy the unobstructed view. The bar is under the roof to the left in this photo. 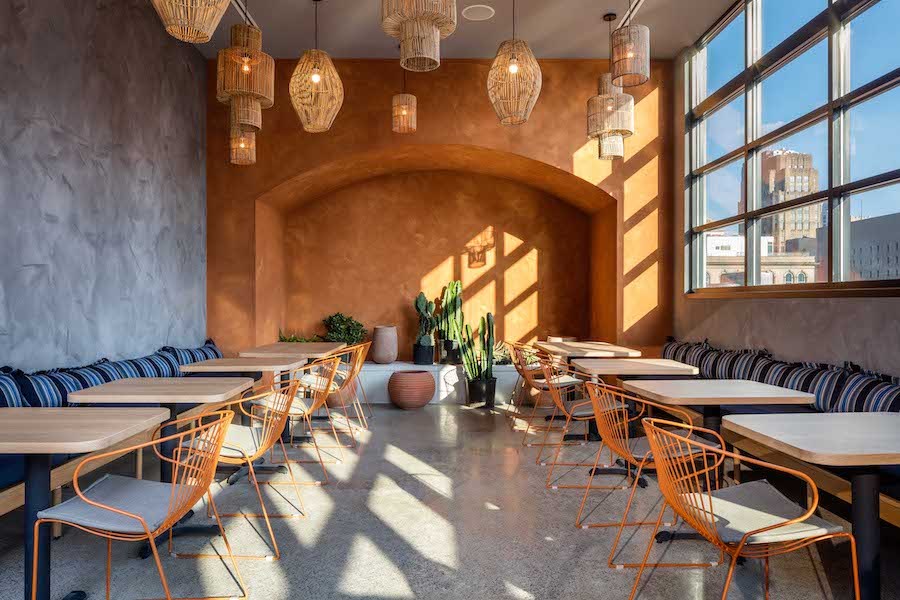 There is also a covered dining alcove at the rear of the taqueria.

The only public gathering space that’s separate from the lobby is El Techo, the rooftop bar and taqueria. (All three eateries/drinkeries are operated by Defined Hospitality, the firm behind some of Philly’s hottest restaurants of the moment, including Suraya, Pizzeria Beddia, and R&D Cocktail Bar, all in Fishtown.) Its retractable roof enables it to be used year-round, and since the roof is made of glass, it still enables patrons to enjoy the view of the neighborhood when it’s closed. (Some rooms currently being used for storage on the rooftop floor will become meeting and function rooms.)

Thus some of the essentials a hotel guest might want — food, drink, space to work and relax — are offered in the spaces meant for everyone. That then means that the hotel doesn’t have to provide them in the rooms. 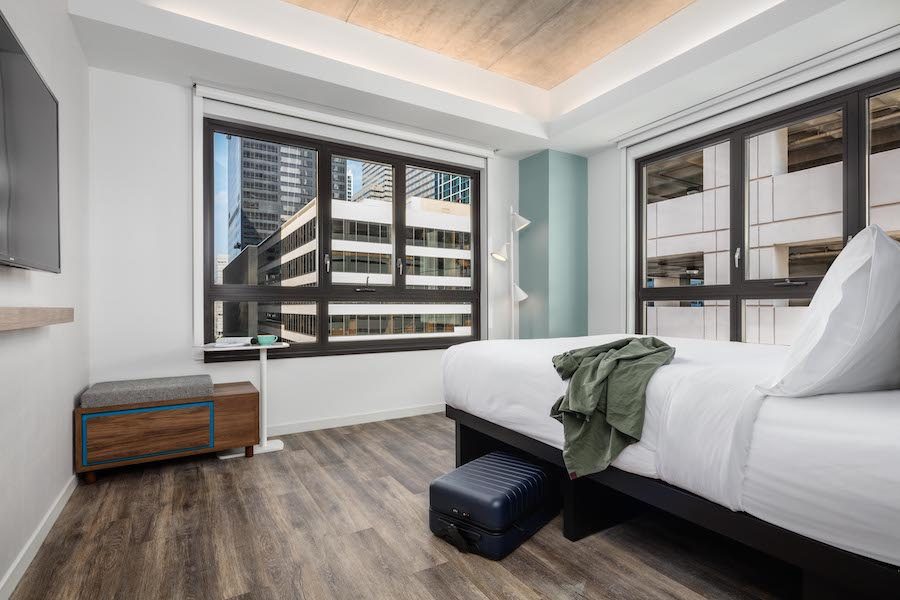 A standard pod at the hotel.

No wasted space in the rooms…

Or at least, not to the extent found in a standard hotel room. Most of the hotel’s 252 rooms — make that “pods” — have 185 square feet of space, just large enough to accommodate a full-sized bed, a nightstand with a safe, a banquette near the window and a movable work desk.

Instead of closets and dressers, they have coat racks and shelves for hanging and storing clothes and other goods; travelers can stow their suitcases under the bed and not have to unpack them to get what they need. 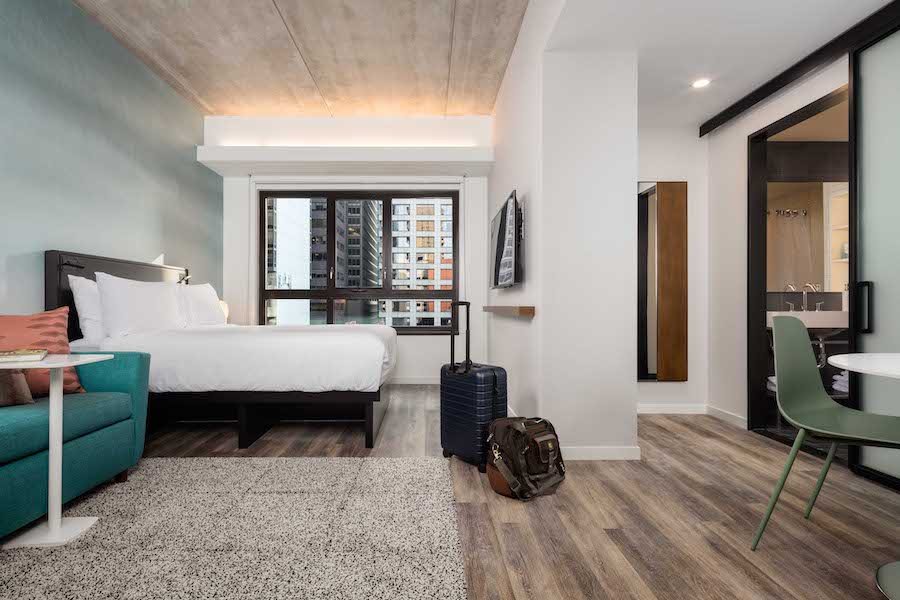 A larger “studio pod” includes a sofabed and a small dining table.

Some rooms are big enough to accommodate queen beds, and “studio pods” of 250 to 300 square feet  have sofabeds and small dining tables as well. 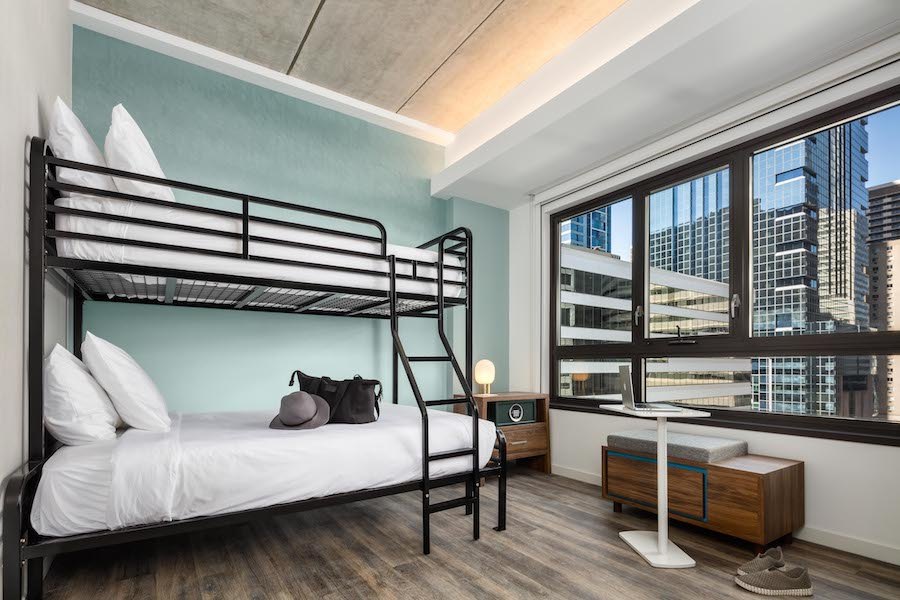 People who wish to travel but not sleep together can book one of the bunk-bed pods. 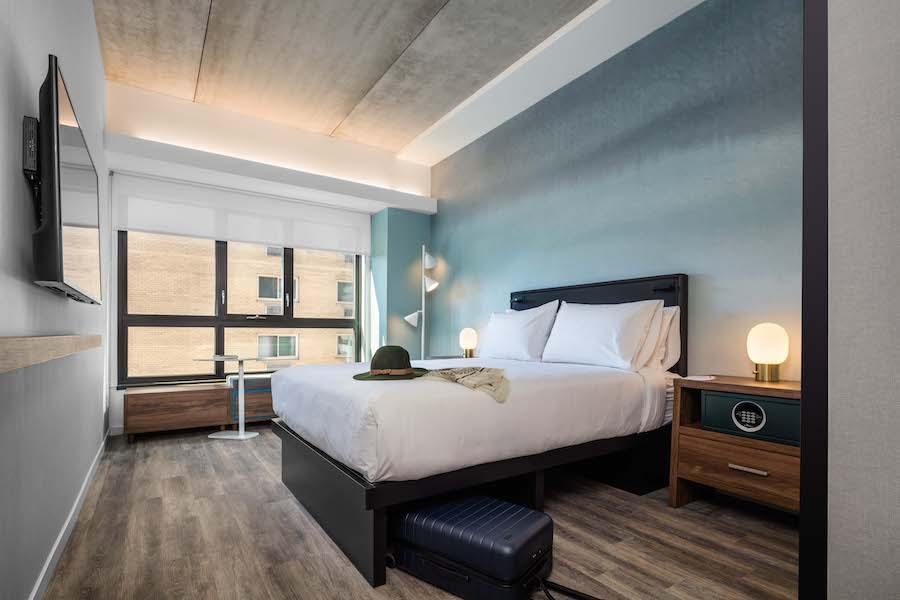 Families on the road can book the bunk pod together with a queen pod next to it. Both rooms have a shared vestibule from the hallway that can be locked.

So are paired suites that combine a queen-sized pod with a more compact one equipped with bunk beds. The individual rooms in these suites can also be booked separately.

“That way, if there are families traveling, we can accommodate them as well,” says Pod Philly Area General Manager Michael Roberts.

In all the rooms, huge six-foot-high windows that open keep them from triggering feelings of claustrophobia.

And all the bathrooms are designed with efficiency in mind too: they contain full-size showers, toilets and vanities, with soap, shampoo and conditioner dispensed from pump bottles in the shower and at the vanity. (That last touch may disappoint travelers who like to collect the little bottles most hotels leave in their rooms, but it does cut down on waste. And cutting down on waste lies at the heart of Pod Philly’s operating philosophy.)

The hotel does have a fitness center for its guests as well; Katz also identified fitness and wellness options as one of the essentials hotel guests need when they travel.

…means no wasted money for the guests

Another thing travelers won’t waste staying at Pod Philly is money. Roberts says that rooms at Pod should run about 30 percent below standard room rates at other hotels in Center City.

And, he says, Pod Philly is attracting exactly the type of traveler it was designed for. “We’re seeing folks who want to get out and want to spend money enjoying the city,” he says. “They’re not going to spend a ton of time in the room here.”

Pod Philly is the seventh hotel in the Pod chain; Modus licenses the Pod name from the owner of the four hotels of the same name in New York. Modus’ first Pod hotel opened in Washington in 2017 “and had enormous success,” says Katz. Philly had been on the company’s radar screen for a Pod hotel from the beginning; Modus was already familiar with the city through its management of the Windsor Suites hotel at 17th Street and Benjamin Franklin Parkway.

Another step towards a hipper Rittenhouse

“We really liked what we saw in the Philadelphia market,” he adds. “It had all the things we were looking for — high barriers to entry, a dynamic urban environment.” He also considers the Pod a contributor to the transformation of Rittenhouse from a blueblood bastion to a younger, hipper neighborhood, something he says was already underway when he visited the city three years ago to scout sites for a hotel.

“There aren’t that many places for younger people to just hang out” in the neighborhood, he says. And, Roberts says, they’re already hanging out at El Cafe.

“With very few exceptions, people don’t travel to hotels,” Katz says. “They travel to places, and they stay in hotels that happen to be in those places.” With this super-stylish, ultra-modern, extra-efficient hotel, Pod has managed to create a hotel that blends in with the place its guests are visiting and gives travelers everything they need and nothing they don’t.