Thanks to the meticulous care showered on it by the owners who built it in 1962, this unassuming stone split-level offers us a perfectly preserved specimen of cutting-edge middle-class living in the 1960s. 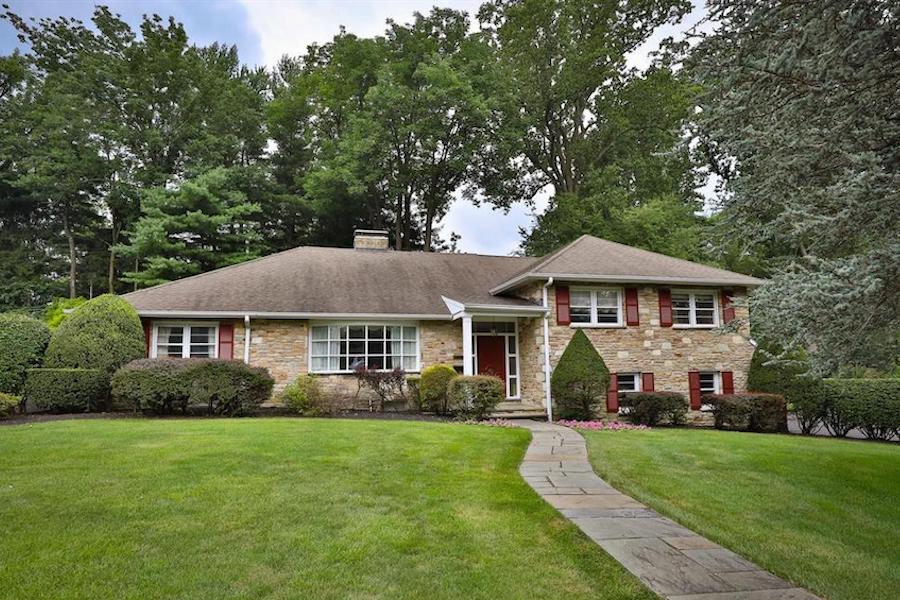 Daughter Cristina Mills, a business development manager at Office Depot, explained that her parents were very particular about the kind of house they wanted. 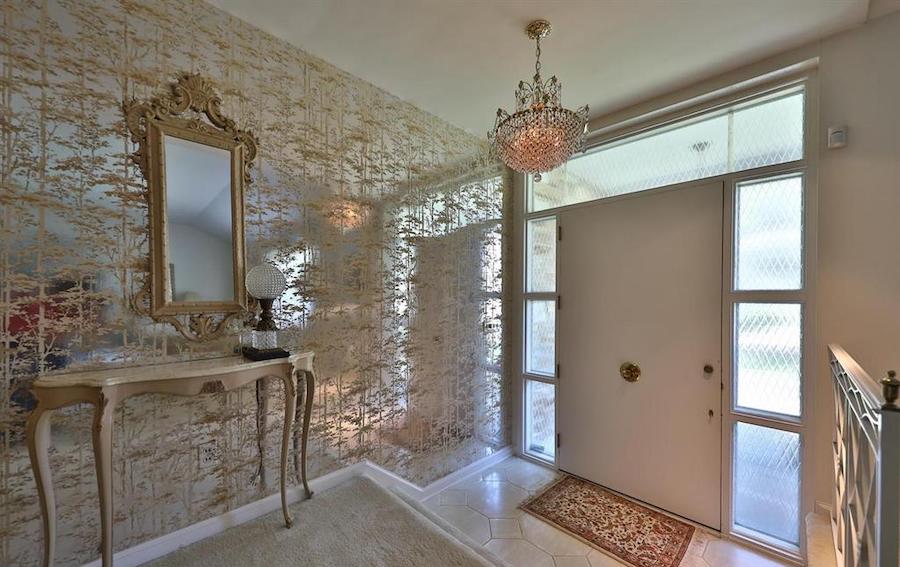 And as the couple had four growing girls — Cristina, the youngest, was two years old when they moved to Abington, and the oldest was 15 — they knew they needed enough room to accommodate their interests and their kids’ activities. 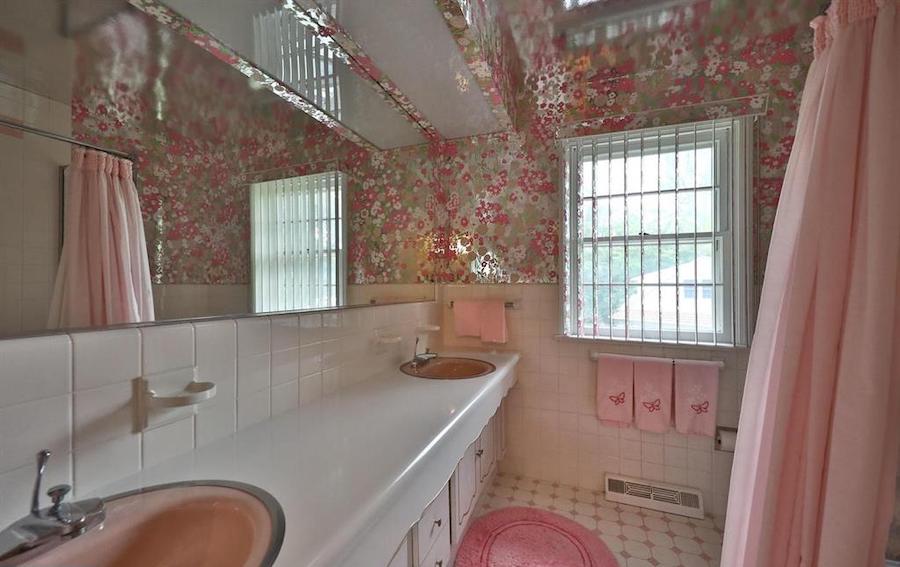 The bathroom the daughters shared

Not to mention their morning routine. “When he designed the bathrooms, he made sure the one we shared on the bedroom floor had two sinks,” Mills recalls. Double vanities were not that common at the time; today, they’re ubiquitous, especially in master bathrooms.

Something else that wasn’t that common then was the kitchen/family room combo that spanned the rear of the main floor. While floorplans were evolving to reflect the changed role of the middle-class woman at home, a space like this was still so novel that The Bulletin sent a reporter for its “Women Today” section to write about it in 1965. 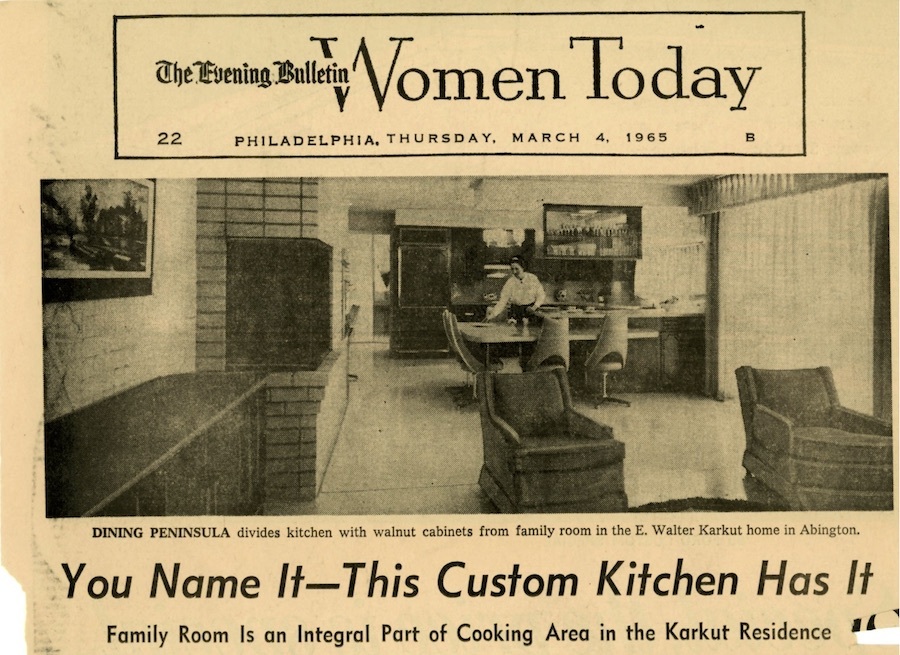 A photo of the kitchen/family room combination from The Evening Bulletin, March 4, 1965. Clippings courtesy Christina Mills 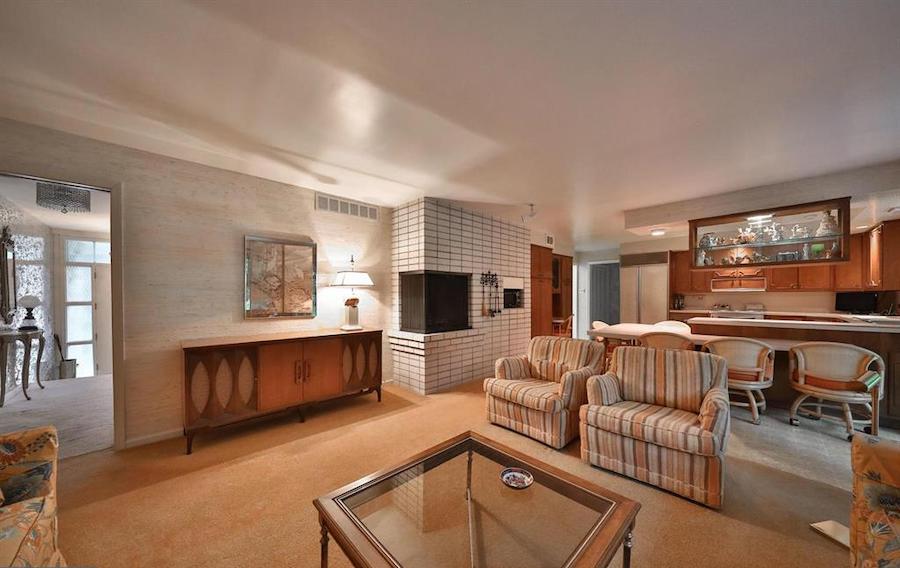 The kitchen and family room as they appear today 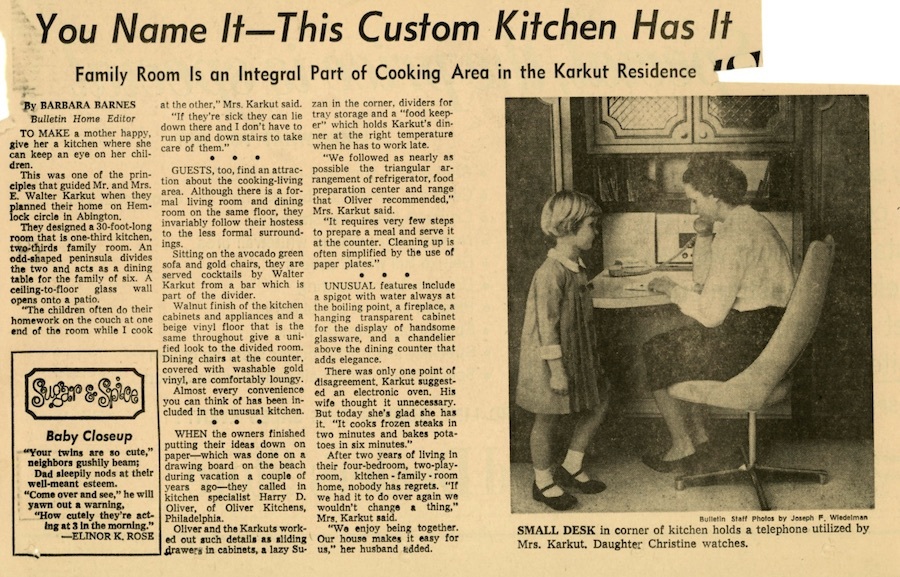 The text of the article. Five-year-old Cristina Mills appears with her mother in the photo

That space today has been altered not one whit from its appearance in 1965. Even the appliances in the kitchen are the originals. (Bet you didn’t think a Sub-Zero refrigerator could hold up that long!) 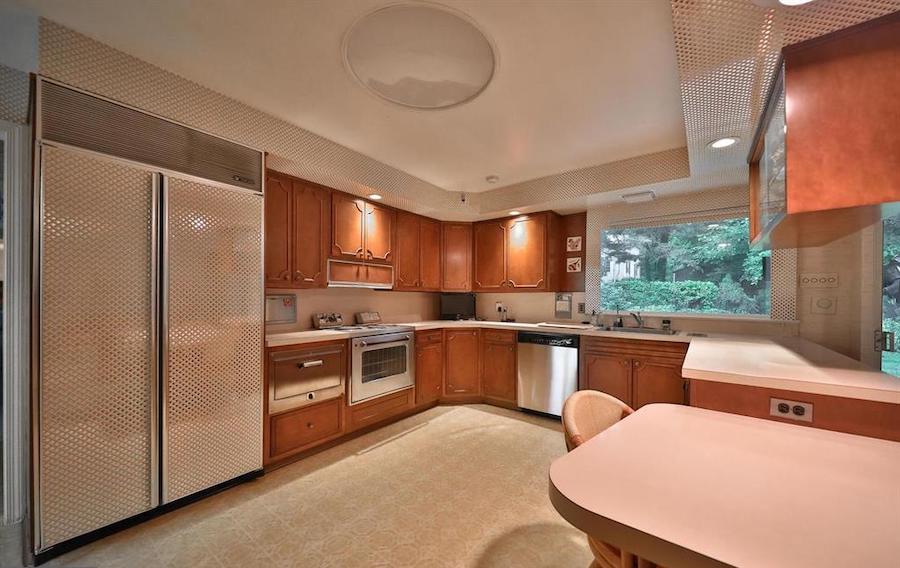 Kitchen. The “food keeper” (warming drawer) is between the refrigerator and the range

In fact, this kitchen is in some ways still a step ahead of its contemporaries today: the shelves in its cabinets slide out so one can access items in the back easily, and it has a warming drawer, an item found only in top-of-the-line kitchens today. (But it lacks a microwave oven.) 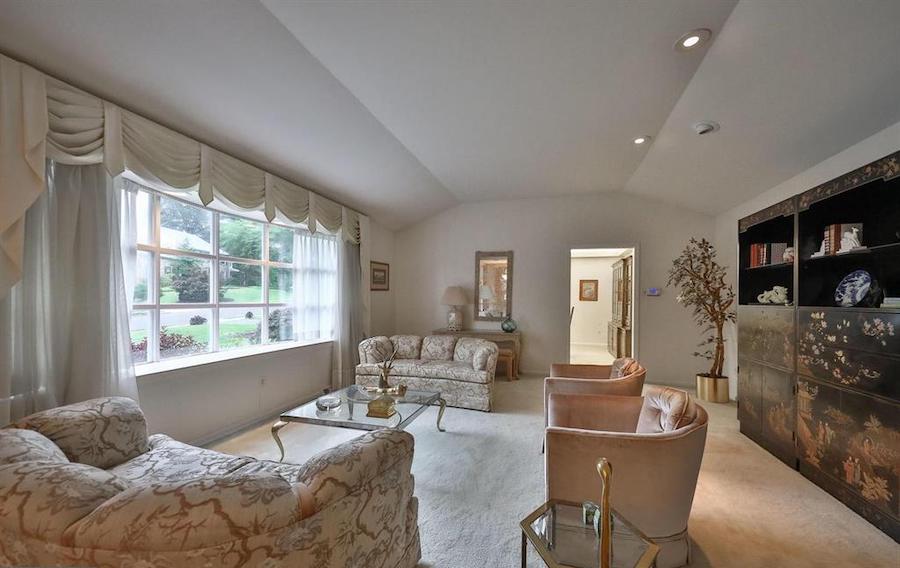 So how did the Karkuts manage to keep this house looking like new for 57 years? Industrious parents who were willing to put in the time and effort, Mills says. 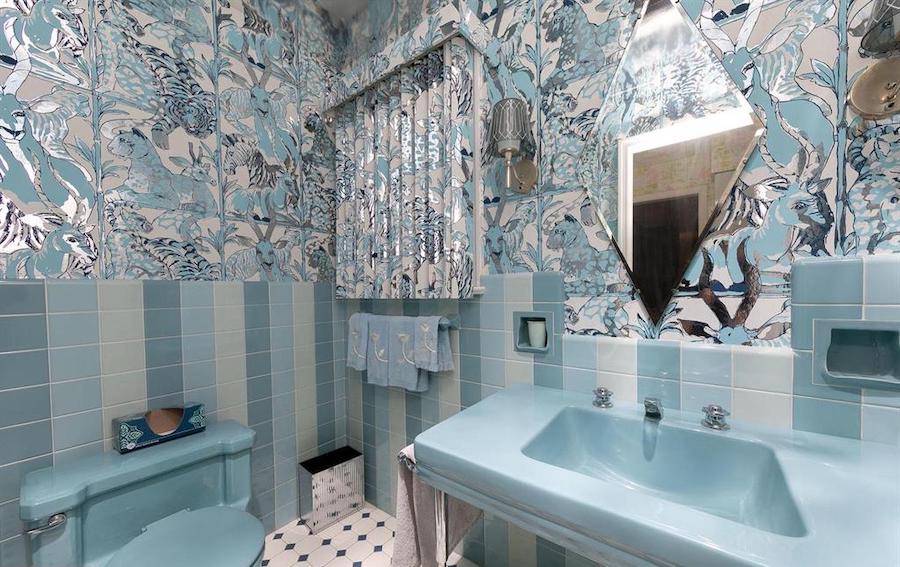 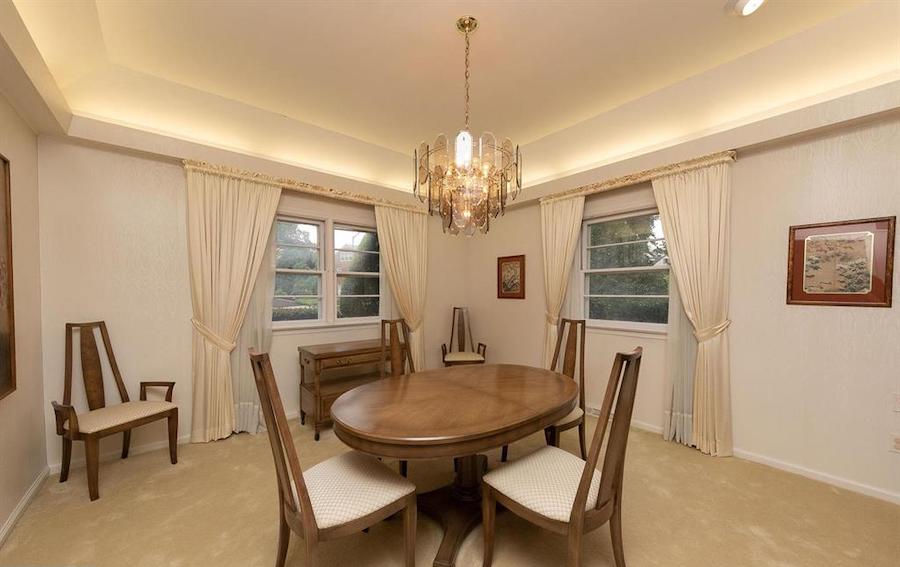 “Dad was handy with the odd jobs,” she explains. He had a workshop in the basement and constantly added to his collection of tools, taking Mills in tow to Sears on weekends to help him acquire more. He built the workshop cabinets and also would climb up onto the roof to clear out the gutters and inspect the slate shingles. 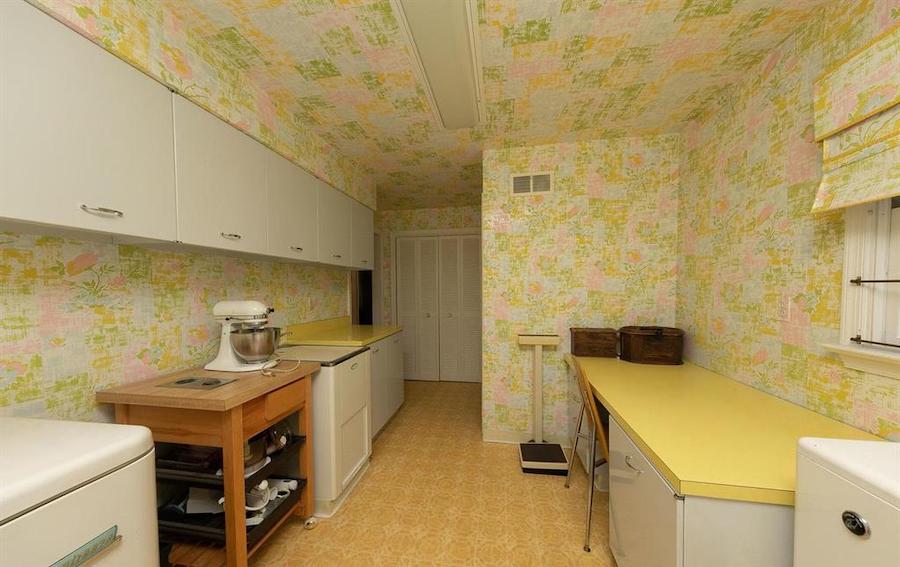 But it was Mom who did the real heavy lifting. She had everything planned: “Tuesday was for running errands,” says Mills. “Wednesday she would change the sheets and clean the bedrooms upstairs. Thursday was downstairs day, when she would clean the kitchen and the common rooms. Friday was the bathrooms. And that brought her around to Monday, when she would do the laundry and the ironing.” 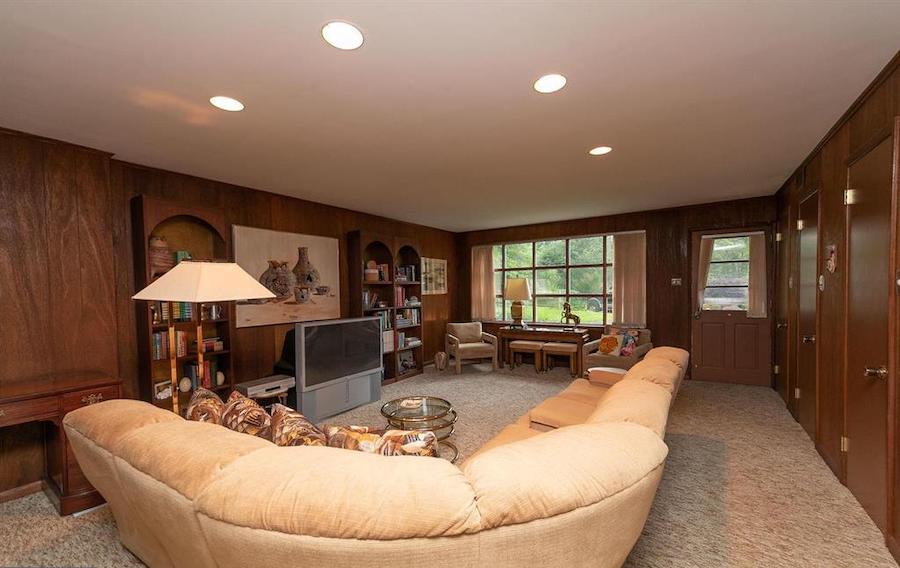 It also helped that the Karkuts used durable, high-quality materials in building the house. “It was about using the right materials,” says Mills, who added that — wait for it — they don’t build ’em like this today. 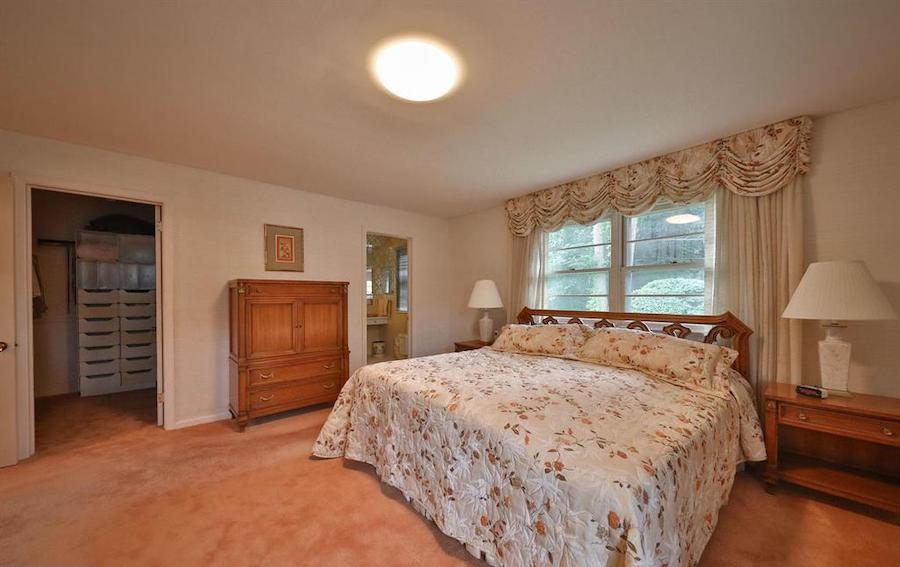 The end result of all this effort and attention is a true museum piece of a house, capturing perfectly a unique, and uniquely American, moment in time. That time was the early Sixties, when Americans flocked to new houses with the latest gadgets and labor-saving devices in the burgeoning suburbs, where they could find houses that exuded contemporary good taste and simple elegance.

“It was a good time to be growing up,” Mills says.

Yes, it was. Yes indeed.

OTHER STUFF: The sellers should seriously consider offering this house to the Smithsonian Institution, or maybe the National Trust for Historic Preservation. The midcentury moment has definitely arrived, and few houses still standing capture the way many middle-class Americans experienced it as well as this one does.