On the Market: Picturesque English Villa in Rydal

One of Wilson Eyre's last residential commissions, this handsome stone villa serves as a surviving link to the grand estates that once occupied the area. 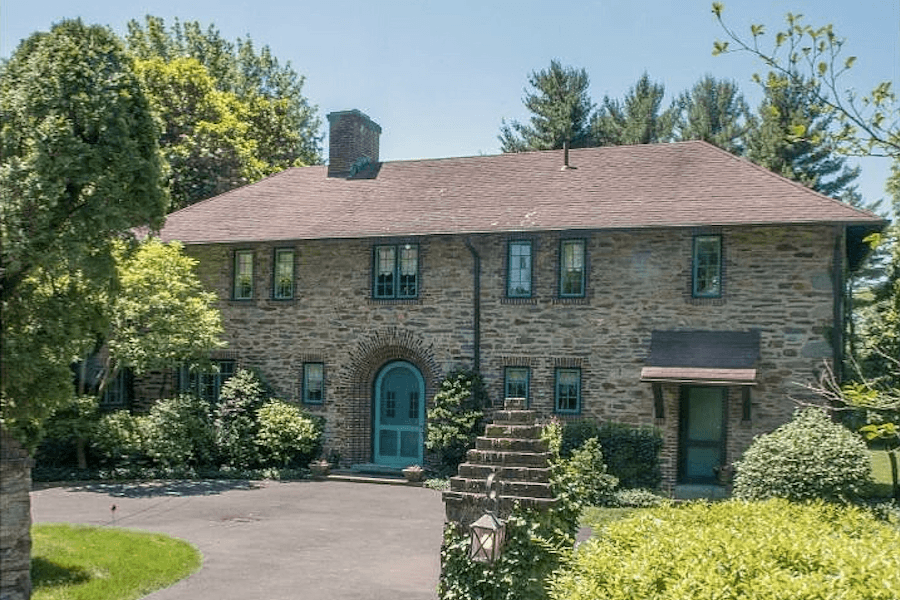 Suburban tract houses, auto dealers and a well-known retirement community define Rydal today, but there was a time when this area that straddles the Jenkintown-Abington border contained a number of grand estates.

Most of the ten estates in the corner of Rydal containing this singular house for sale have disappeared. That makes this one a rare gem — a living link to Rydal’s past. 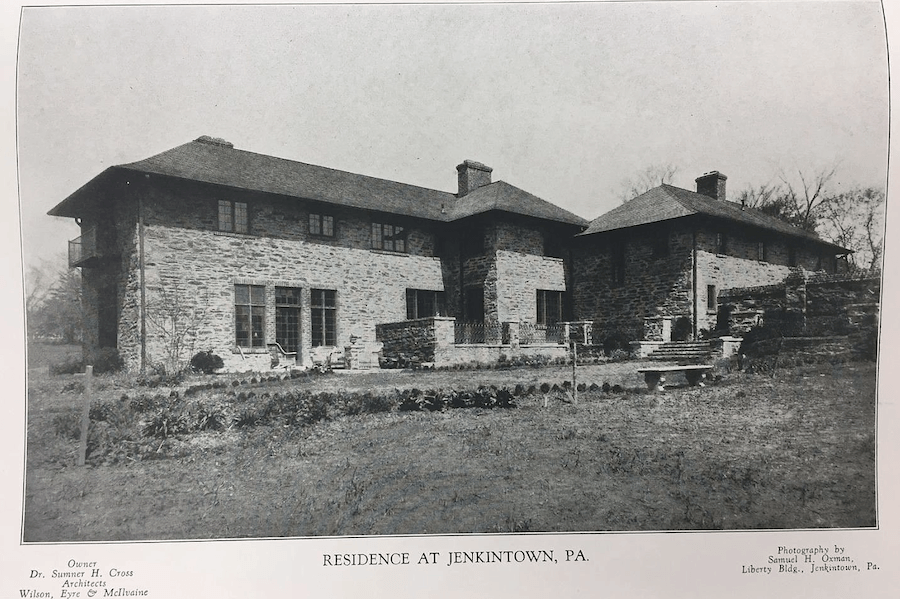 The rear elevation, photographed in 1930

What makes it even more special is that it has survived largely unaltered to this day. That may be because only four people have owned this house since it was built. Three of them, including its original owner, were physicians.

“Villa Medici” is one of the last works of one of Philly’s greatest early-20th-century domestic architects, Wilson Eyre. Eyre designed it in 1929 for Dr. Sumner Cross, a prominent Jenkintown physician who would go on to become head of the department of medicine at Abington Hospital after moving in.

What $500K Will Buy You in Abington Township 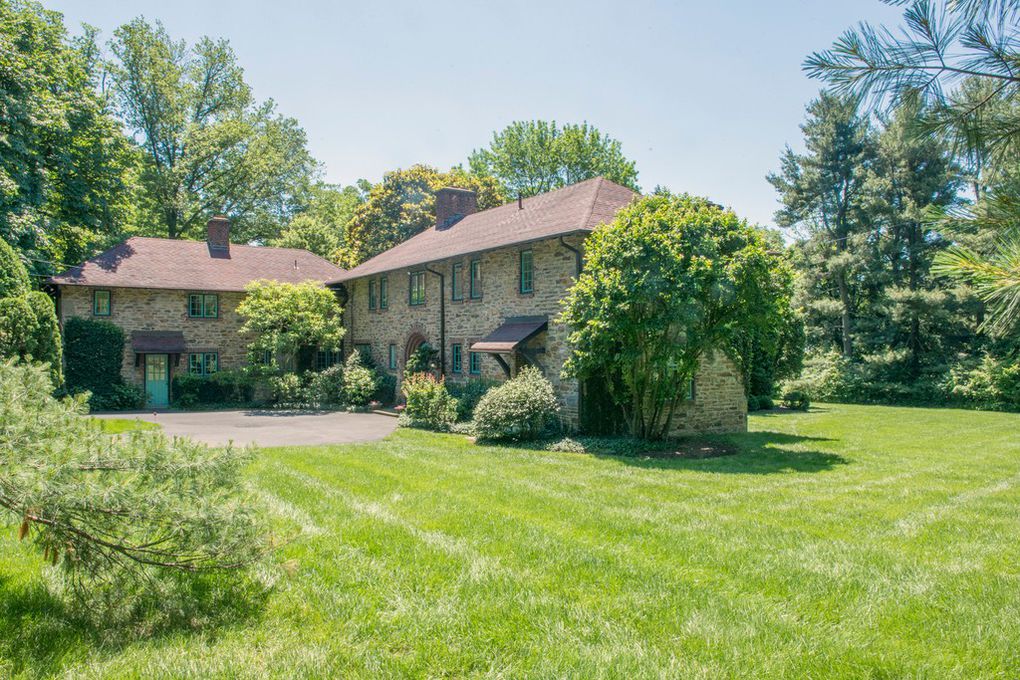 Full view of the house

Cross bought the 2.56-acre lot on which this house sits from John Worrell Pepper, the then-owner of one of those ten estates: Fairacres, also designed by Eyre and now demolished. The house Eyre designed for Cross served as both his residence and his office. It consists of two wings. One contains the main living quarters and former doctor’s office — the door to the right of the main entrance led to the office — while the other contains the kitchen and former maid’s quarters. 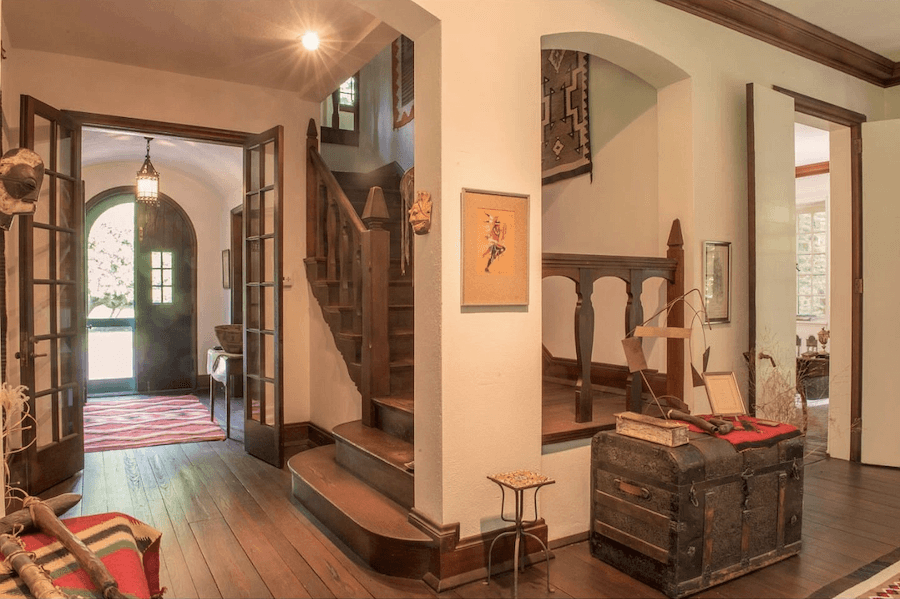 It draws heavily from the British Arts and Crafts style best exemplified in the later houses of Sir Edward Lutyens. Yet it also represents Eyre’s own tastes. The stair railings in the foyer, for instance, are pure Eyre. 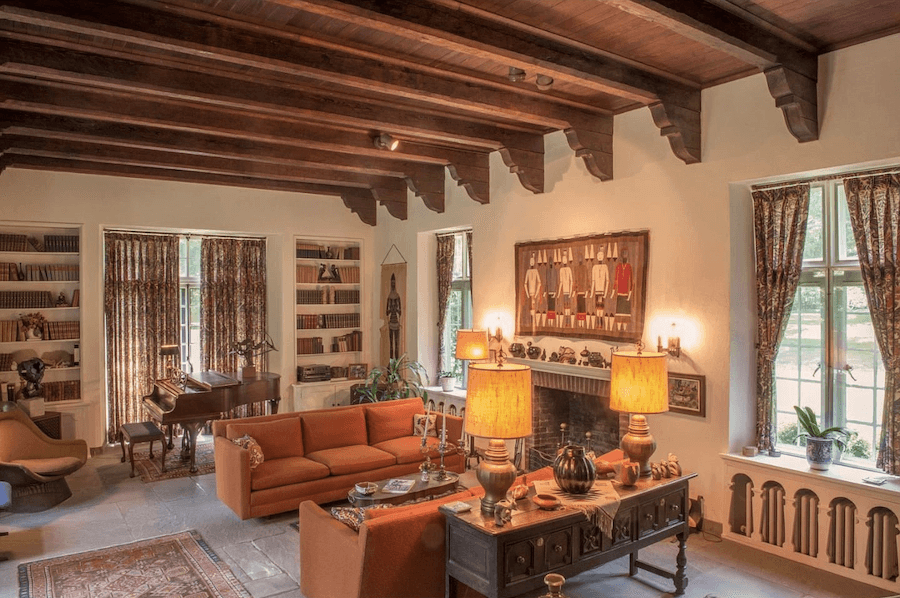 The sunken living room features a beamed ceiling, a fireplace, and French doors that lead to one of the house’s two rear terraces. 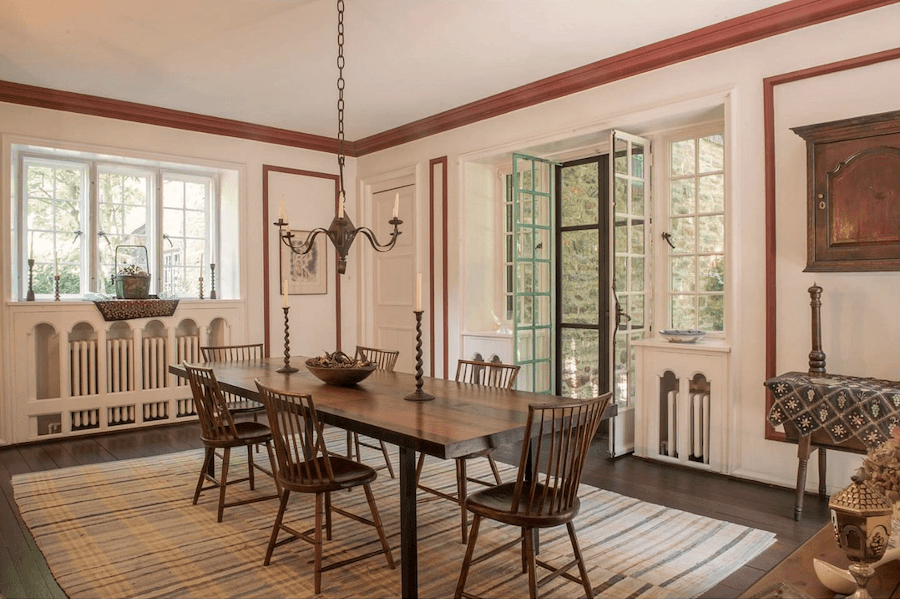 The dining room also has a fireplace and French doors that lead to the other terrace. 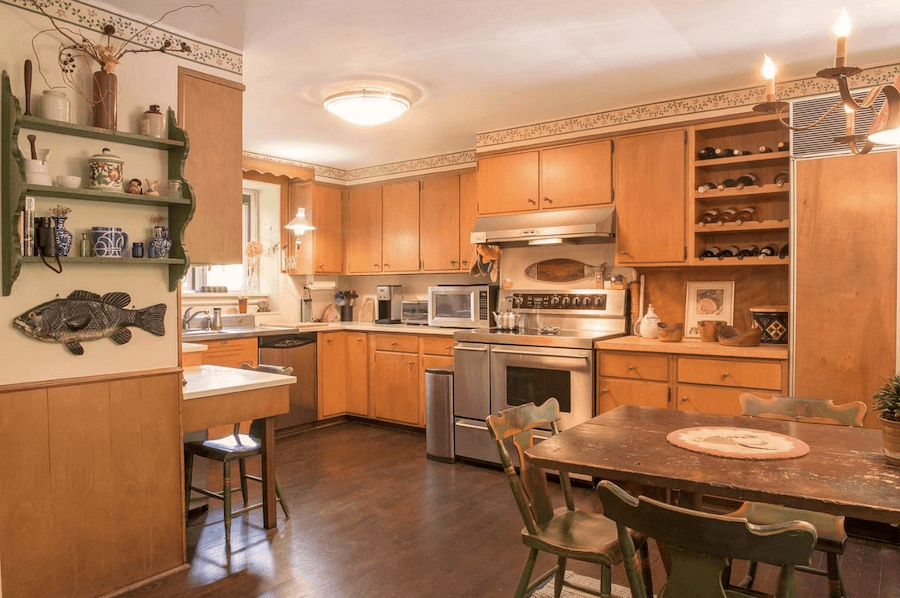 The eat-in kitchen contains one of the two alterations made to the inside of this house since it was built. It got remodeled in the 1950s with tan cabinets, Formica countertops and stainless-steel sinks in both it and the butler’s pantry that connects to the dining room. Its appliances, however, have been updated and include a smooth-top range with double oven. 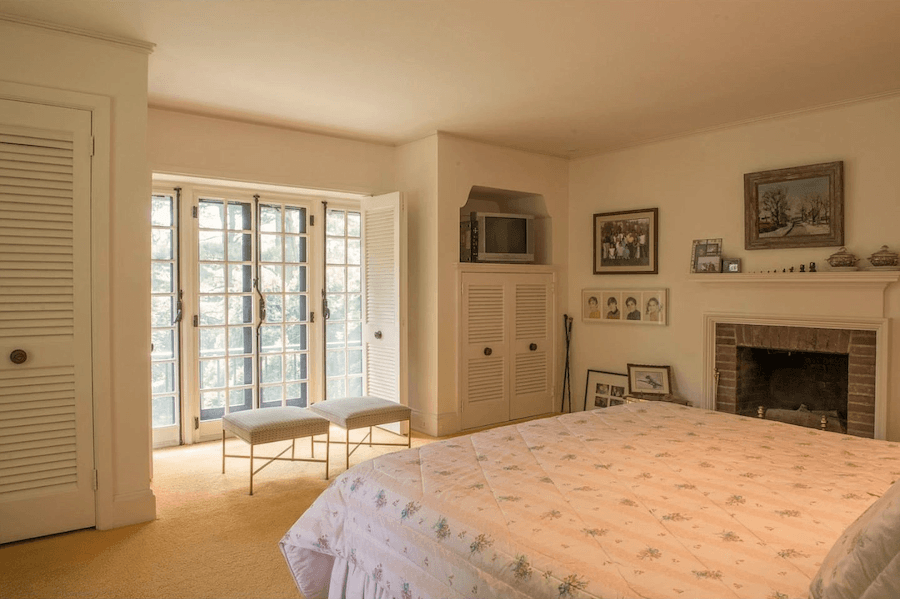 There’s a spacious master suite with a sitting room and five other bedrooms on the second floor. The only other alteration to this house took place in the former maid’s wing: a wall in the second-floor maid’s bedroom was removed in order to enlarge it. 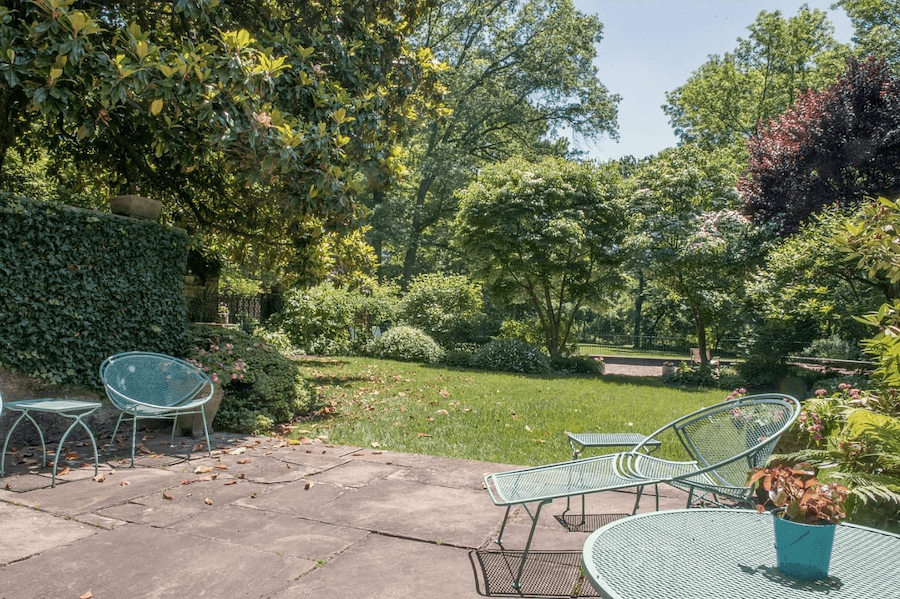 The outdoor spaces have also been well maintained. The dining-room terrace, a favorite spot of the current owner, looks out over an expansive, well-kept and nicely shaded backyard that contains plenty of room for entertaining and recreation. 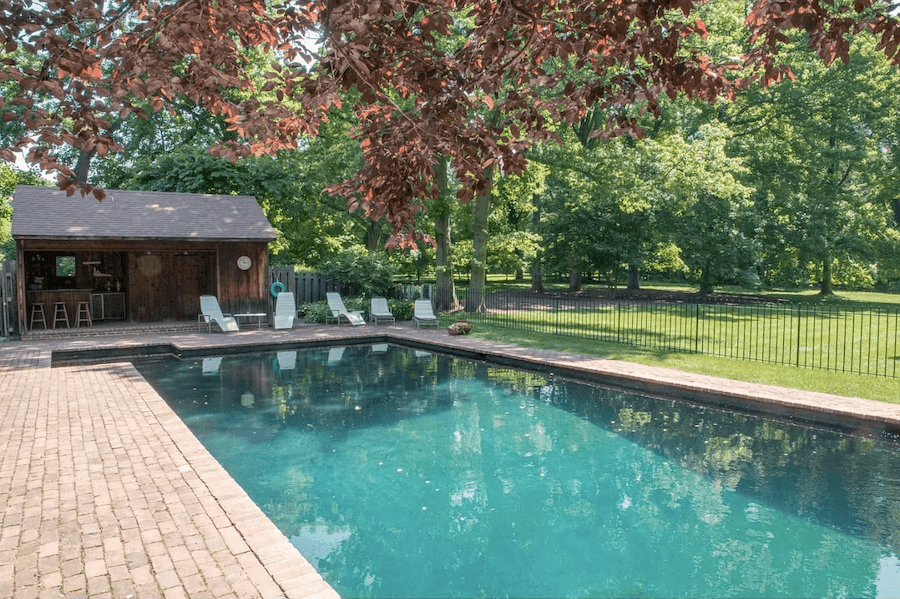 Speaking of recreation, the third and last alteration to this place can also be found in the backyard. Sylvan Pools, which installed the in-ground pool in the 1970s, liked the result so much this pool appeared in its promotional brochures. Its cabana contains a “privy,” a dressing room and a bar. The bricks that surround the pool once paved a Philadelphia street.

One other element that makes this house for sale even more of an estate: It sits next to Abington Friends School’s leafy campus. Another: It’s set well back from the road, tucked behind its neighbors. And another: Besides its own lot, the house comes with a half-interest in a two-acre parcel next to it. The current owner went in with the next-door neighbor on Fairacres Road to buy it and preserve it as open space in perpetuity. This lot serves as a wildlife habitat and an additional buffer from the nearby buildings on Meetinghouse Road.

Yet this secluded private retreat is a mere five-minute drive from both Jenkintown-Wyncote Regional Rail station and Abington Hospital. Jenkintown’s lively downtown is even closer.

OTHER STUFF: A new high-velocity air-conditioning system keeps some of the second-floor bedrooms cool. This house’s sale price has been reduced four times since it was listed, most recently by $75,000 on May 6th.