Apartment Profile: A First Look at One Ardmore 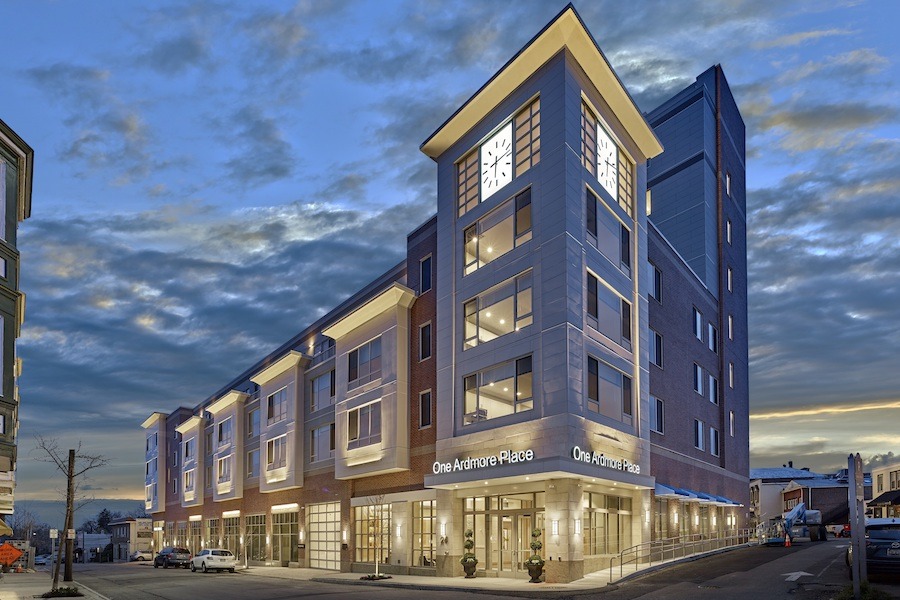 It has too much parking. And if things go as the people who backed this project for 11 years want it to, it may not have enough parking.

It depends on what kind of parking we’re talking about.

The 110-unit apartment building has 116 resident parking spaces. That’s more than one space per unit, and in a building that’s designed to be transit-oriented to boot.

Dranoff says that the surplus parking was dictated by the building’s dimensions. “We had three half levels of parking” in the underground residents’ garage, he says. “If we had gotten rid of a half level, we would have had less than a one-to-one parking ratio. We wanted to accommodate all our residents so that the business community would not feel we were usurping their limited parking.”

But those businesses also got more parking as part of this project. Its above-ground public garage contains 40 more spaces than the township-owned surface parking lot the building sits on had.

Ardmore’s business community is banking on the additional retail activity this project will stimulate to fill all 40 of those extra parking spaces.

The building itself is designed to make downtown Ardmore more of a live/work/play district than it is already. It sits just a few hundred feet off Lancaster Avenue and about a block and a half from the Ardmore Regional Rail station.

“We feel a lot of residents will neither need nor use a car,” Dranoff says. But the neighbors and the township insisted on enough parking for every unit to have a space, so if Dranoff’s (and the township’s) hopes are realized, there will be empty spaces galore in the residents’ garage.

The point, however, according to Dranoff: “We created a transit-oriented development where none existed before.” 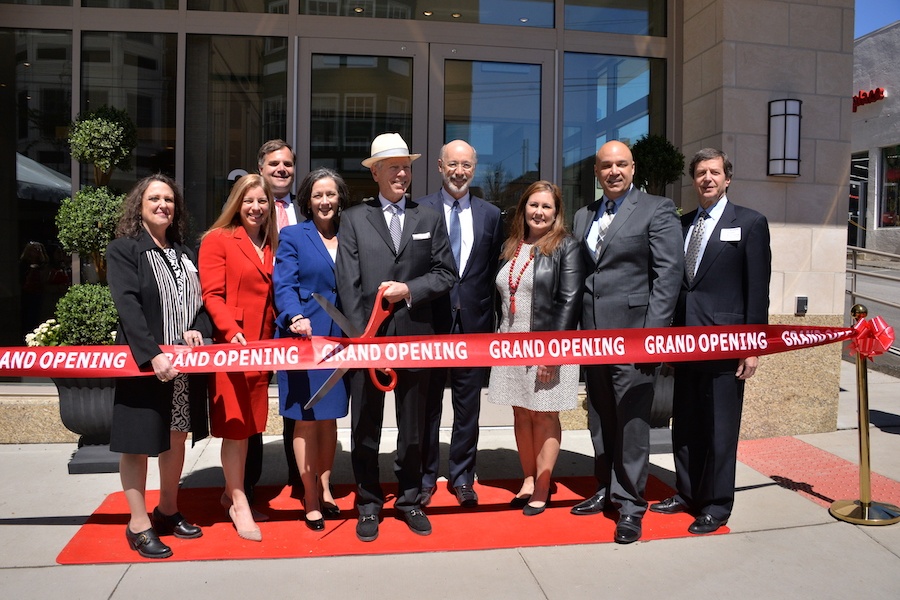 Some twists and turns on the 11-year journey

Which is what the Ardmore Business Improvement District and township officials wanted 11 years ago when they first picked Dranoff to develop a plot of land beside the tracks and right next to the station as a mixed-use residential-retail project.

According to Dranoff, Amtrak made demands for protective design that made that site unworkable. So he and the township went back to the drawing board. The township offered a municipal parking lot on Cricket Avenue as the new building site. Dranoff accepted. And that should have been it.

But it wasn’t. A state grant to cover some of the construction cost was rescinded, then reinstated. (The Governor who awarded it, Ed Rendell, and the one who reinstated it, Tom Wolf, both spoke at the April 16th ribbon-cutting ceremony.) Some of the building’s neighbors sued Dranoff, arguing that the seven-story-high building was out of scale for the Ardmore business district. (They lost.)

And so it turned out that 11 years passed from the decision to go ahead with this project to its completion.

Was it worth the wait?

Ardmore Initiative Executive Director Nancy Scarlato thought so. In her remarks at the ribbon-cutting, she noted that 30 new businesses had opened in downtown Ardmore while One Ardmore was rising, but only six had closed. “This tells us that Ardmore is truly a destination,” she said. “One of the hallmarks of a successful business improvement district…is feet on the street, and the arrival of 200-plus new neighbors certainly gives us that.” 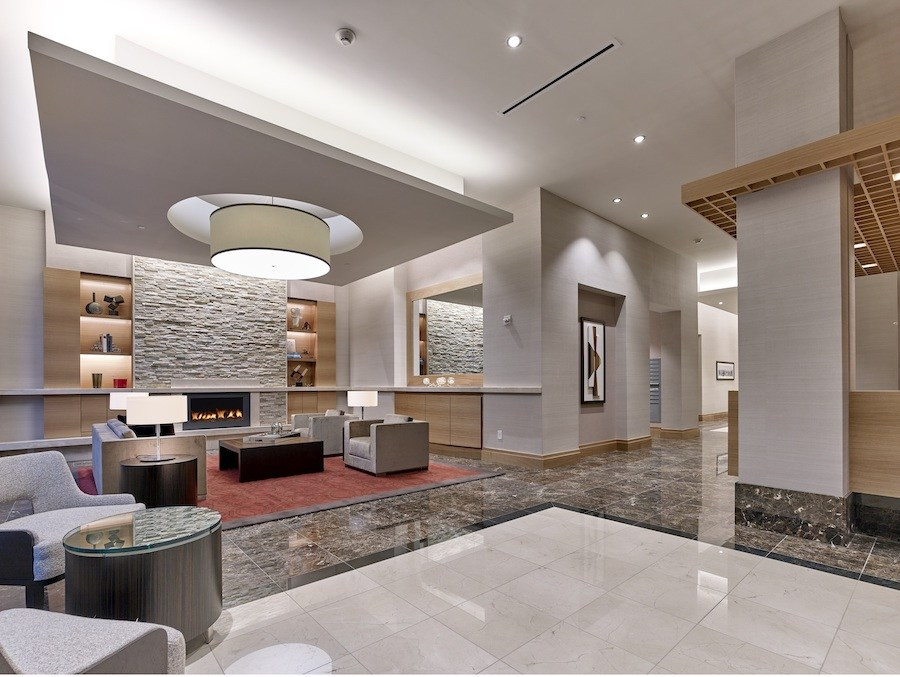 The lobby of One Ardmore.

And what will those 200-plus new Ardmorites get for their rent money?

An apartment building that offers the kinds of amenities those new Center City high-rises offer, at rents to match, but in a lower-rise suburban setting.

Dranoff isn’t known for cutting corners when he builds, and this building is no exception. Designed by Cope Linder Architects (since merged with interior-design giant Nelson), One Ardmore seeks to fit in with the traditional brick-and-stone vernacular of its surroundings, even going so far as to place a clock tower above its entrance as a signature element. And it almost pulls off the trick. The use of real brick helps; the choice of metal panels as the alternating material doesn’t — it makes the exterior look more like those cheap stick-built apartment complexes that dot suburban landscapes all across the country.

The architects, developer and builder made no such missteps on the inside. The common spaces are all polished and substantial. 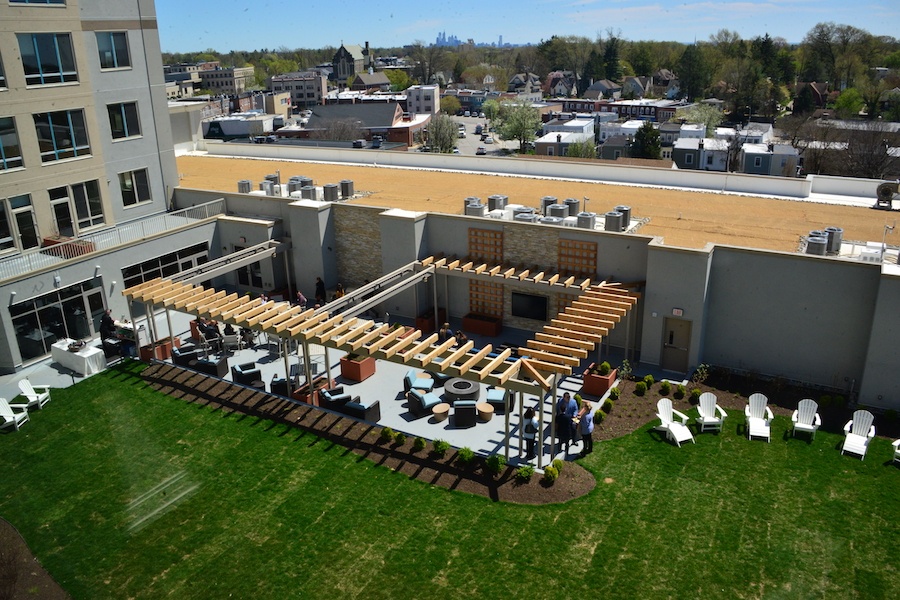 View of the fourth-floor terrace from above. Green roofs will also be installed on top of the apartment floors. | Photo: HughE Dillon 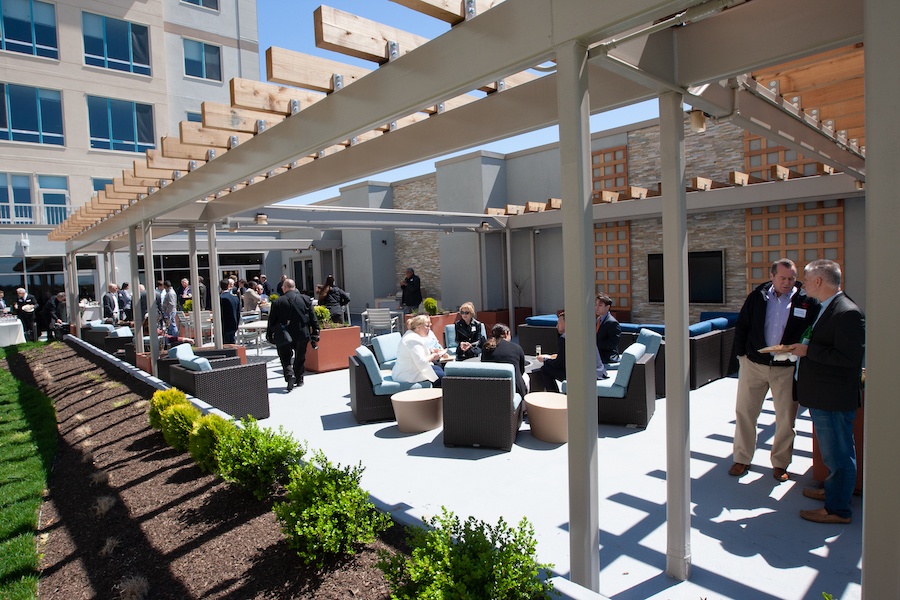 The patio portion of the amenity floor terrace. 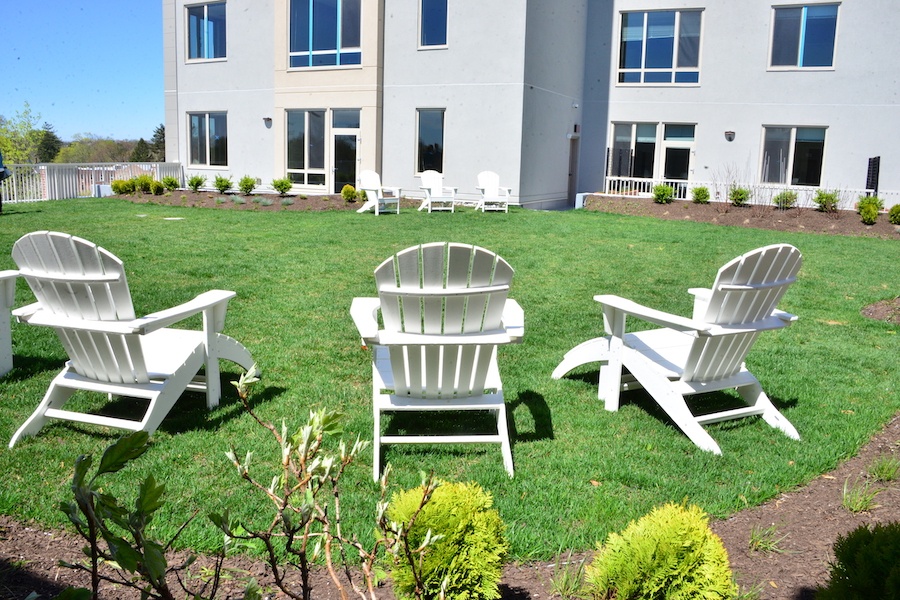 The green roof that tops the lower apartment floors also functions as a lawn for the amenity-floor terrace. | Photo: HughE Dillon

None more so than the fourth-floor outdoor terrace. Set on a green roof, this arbor-equipped space feels like a combination backyard and outdoor living room. 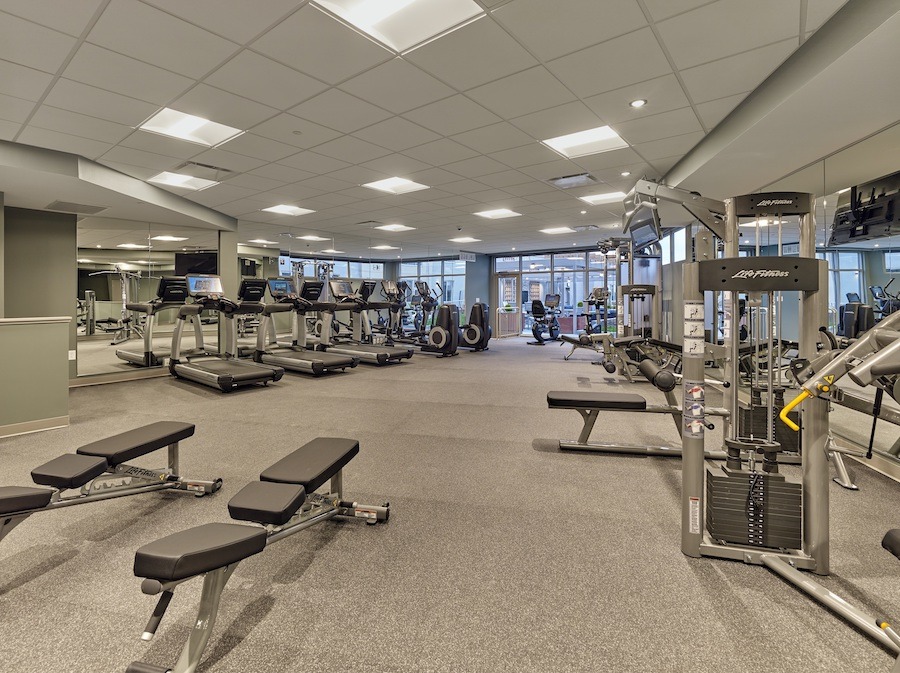 All of the common spaces, including the fitness center, open out onto it as well. Dranoff hopes that this element of the design will encourage residents to make more use of all the common areas year-round. 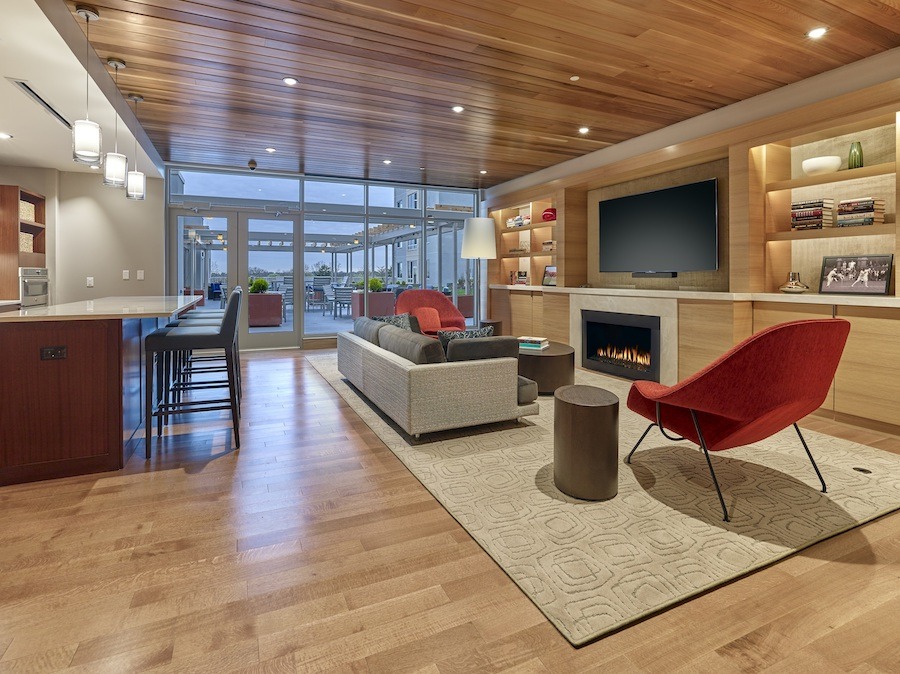 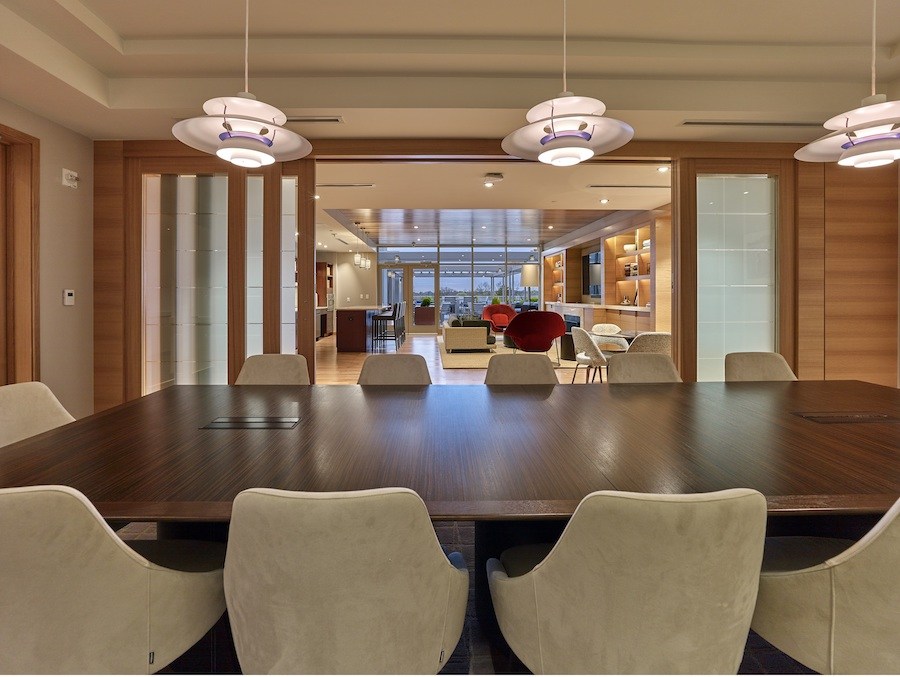 The main lounge lacks a demonstration kitchen, but it has plenty of room for entertaining. And in another distinctive Dranoff touch, the books on its bookshelves are meant to be read. 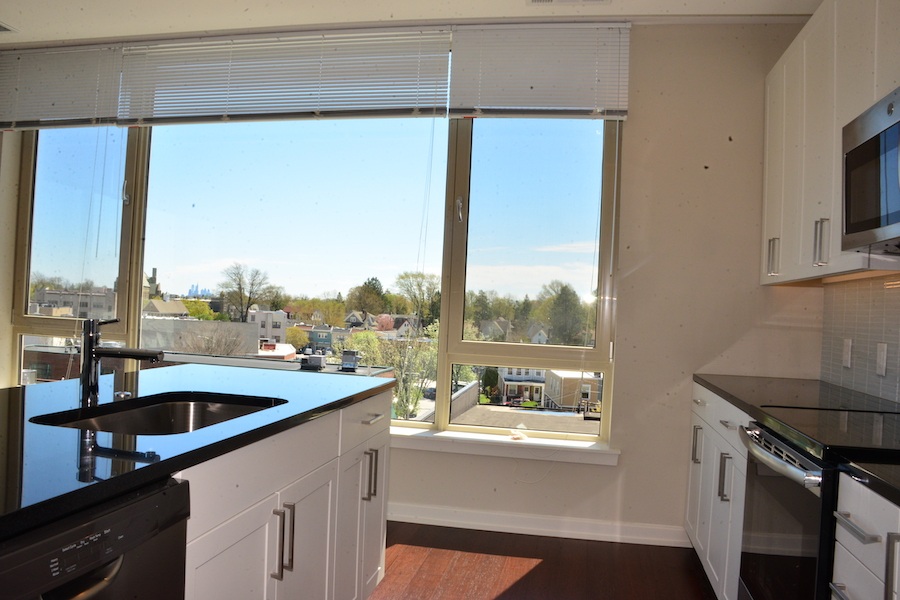 The view from an east-facing apartment. The Center City skyline is visible in the far distance. | Photos of apartment interiors: HughE Dillon

The apartments themselves look much like other upscale apartments, but there are some distinctive touches. The extra-large windows let in lots of light and offer great views of the surrounding town. East-facing units on the upper floors get views of the Center City skyline as well. 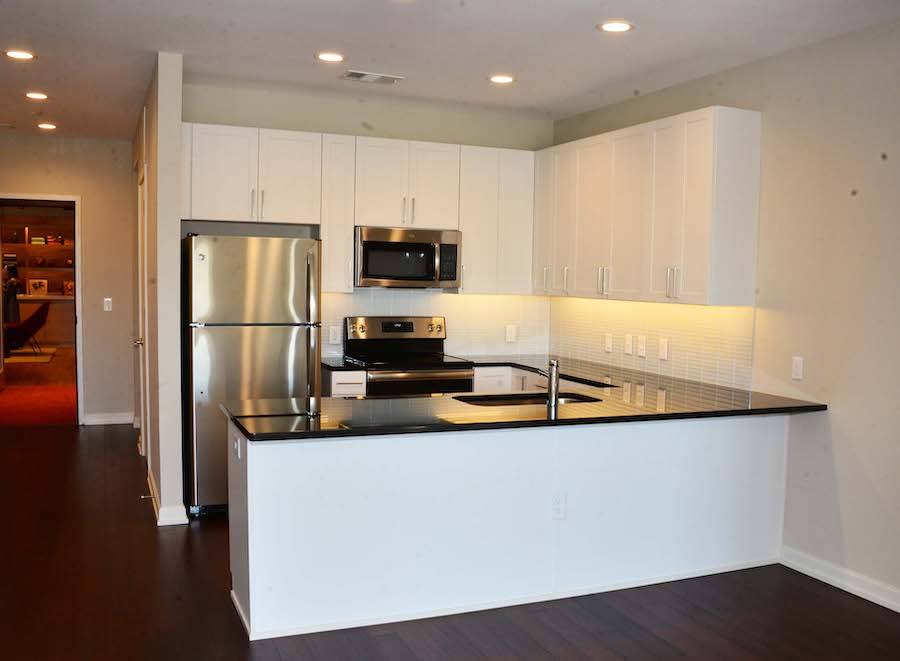 Real hardwood floors spread across the main living spaces, while the bedrooms are carpeted. 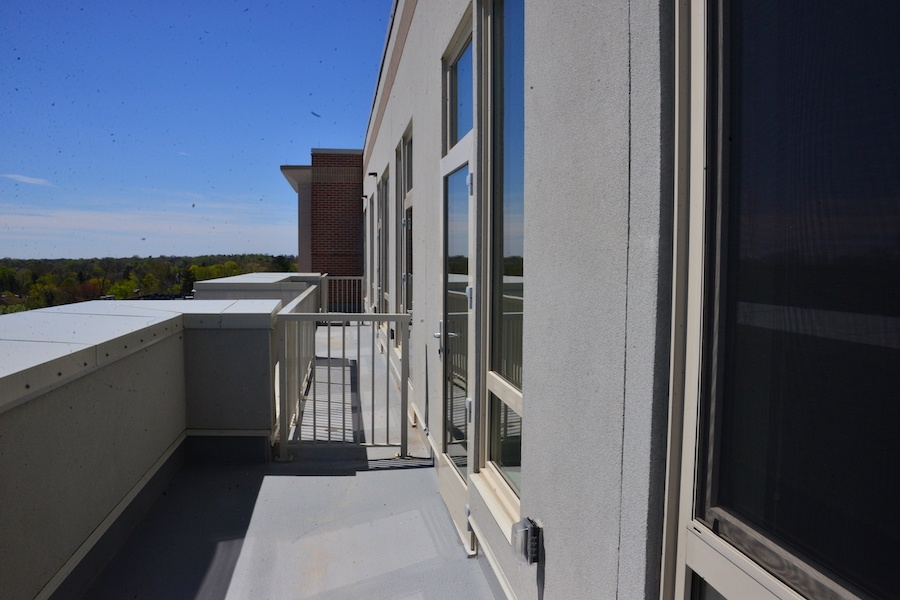 Some upper-floor units have private balconies. Units facing the terrace have their own private terraces as well.

Furthermore, the building’s trapezoidal shape produced many more non-right angles, and the floor plans — 26 in all — thus have more originality than is typical.

“A new benchmark” for suburban apartments

“This sets a new high benchmark for anything that’s been done in the suburbs,” Dranoff says. It certainly adds to the urbanity of the Main Line’s most urbane suburb.

But while it does cater to the Baby Boomers and Millennials who prefer living in walkable communities, as all that parking demonstrates, it hasn’t completely turned its back on suburban reality.

With the completion of One Ardmore, Dranoff Properties completes its exit from the Philadelphia rental real estate market, at least for now. In addition to cutting the ribbon on Tuesday, Dranoff also handed over the symbolic key to the property to AIMCO, which now owns and manages the building. The Denver-based apartment manager bought Dranoff’s apartment portfolio last year, including this building upon completion.

One Ardmore By the Numbers

Number of parking spaces: 116, including spaces with Tesla charging stations.

Pet policy: Pets welcome, up to two per unit, with a $500 non-refundable fee and an additional $45 per month rent per pet. Some breed restrictions apply.