The new rental building in Logan Square welcomed its first tenants in late December. It's nicely outfitted and honors its building's industrial heritage. 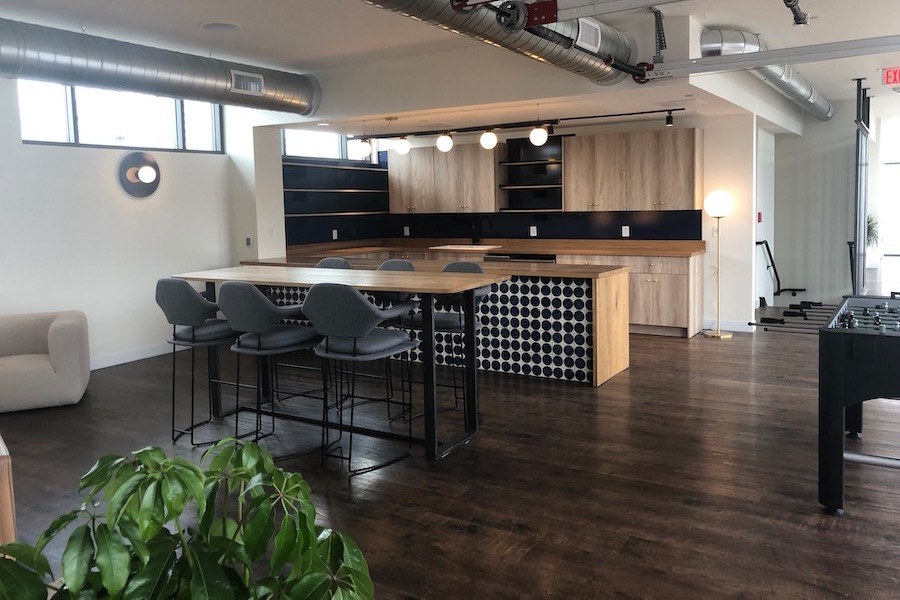 The bar and catering kitchen in the clubhouse on the top floor of Sixteen Hundred Lofts showcases the design sensibility found throughout the building. | Photos: Sandy Smith unless otherwise indicated

For 60 years, it did just that for Middishade Clothing Company, one of the leading manufacturers of men’s suits in the country. The clothier was the longest-lived of five industrial and commercial tenants that have occupied the “No. 1 Building” at 16th and Callowhill streets since it opened in 1908. 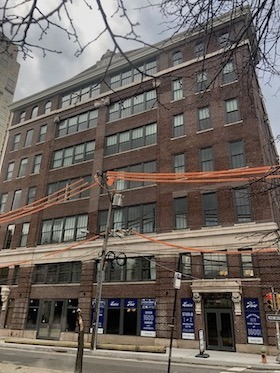 The exterior of The No. 1 Building, which now houses Sixteen Hundred Lofts. The building’s original cornice was restored during the conversion.

This past December, after having sent out iron, steel, race cars, yarn, suits and passports for 110 years, the No. 1 Building took in its first residential tenants.

The building got its name because its builder, the C.C. Knight Co., envisioned it as the first of several buildings it would build to house its iron and steel merchant business. That business relied on nearby industrial plants, most notably the Baldwin Locomotive Works, for most of its sales.

The No. 2 Building never came to pass. Instead, No. 1 changed hands in 1915, when Louis Bergdoll, son of a Philadelphia beer baron, bought it so he could build race cars in it. Two years later, the Lees Company of Norristown bought it. Lee’s acquisition launched the building on its second career in the fabric trade. The yarn maker called it home until 1929, when Middishade acquired it and turned it into a suit factory. 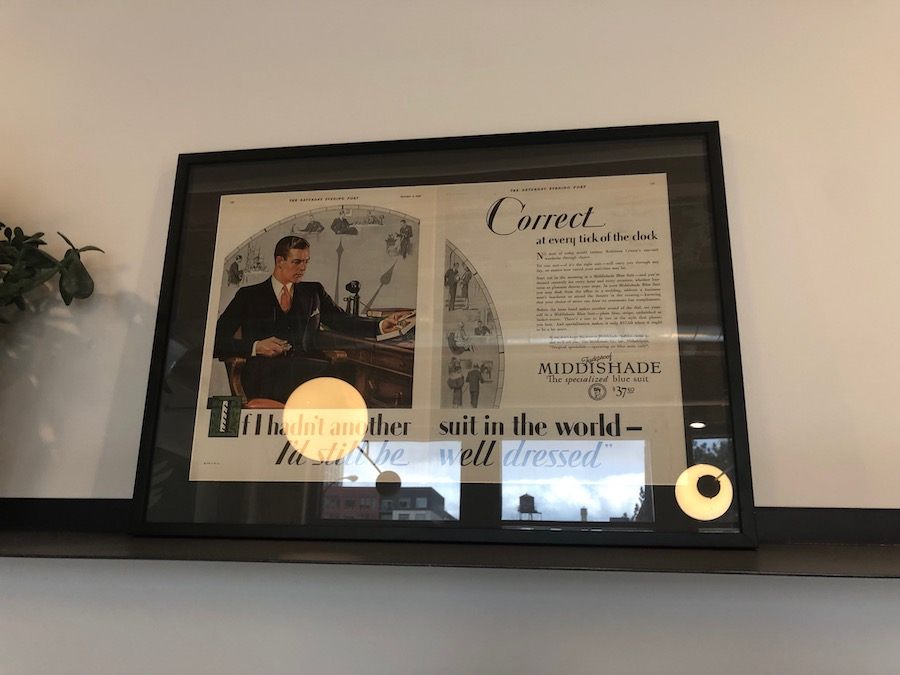 A Middishade ad from the 1930s, on display in the lobby lounge 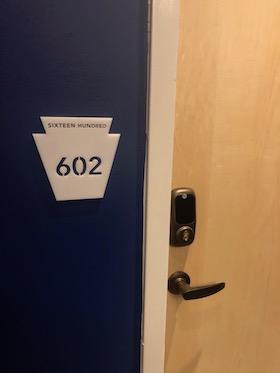 The apartment number plates were produced by Tiny WPA, a West Philadelphia-based workshop that engages community residents in creative placemaking and trains teens in construction techniques. The walls are painted Middishade blue.

Ivy bought the building that year and launched its makeover in the summer of 2017. It brought in BLT Architects as project architect and Edsel Design Co. as the interior design consultant. They converted the building into residences with street-floor retail and parking and designed it to honor its past.

“We want to make it a true mixed-use building,” says Brianna Wilkins of Ivy Realty. “We have people living here, but we also have people visiting here”— the building’s lower three apartment floors have been leased long-term to Sonder, an operator of furnished flexible-stay residences — “and we’ll have retail on the ground floor and really make it a center of gravity for the neighborhood.” 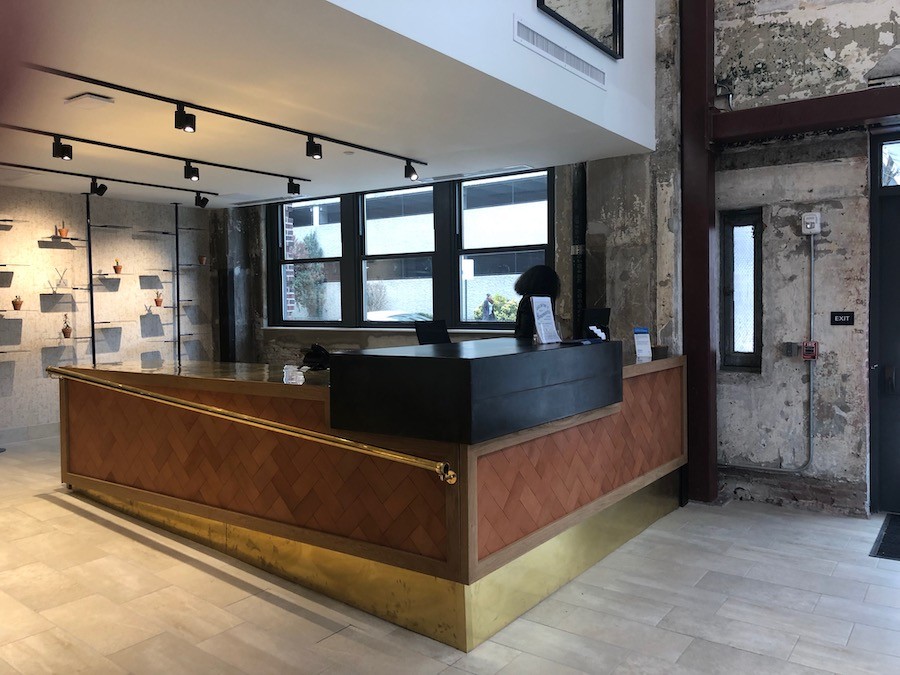 The homage to the building’s history takes several forms. One is in the lobby, where the concrete and plaster walls were left exposed and unpainted. The custom-made concierge desk is designed to serve as a polished contrast to the raw walls. 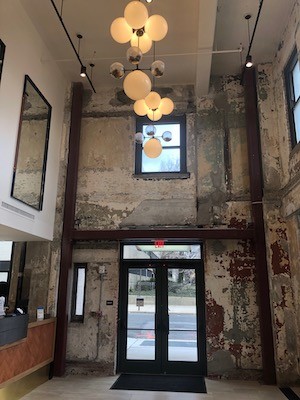 Another is in the choice of a medium-dark blue as the accent color for the hallways and rugs. This blue was the “middle shade” that became the signature color for Middishade’s “Fadeproof” suits.

Within the units themselves, the brick walls were left exposed but painted white. “It was a really nice surprise when we started to [demolish the interior of] the building and we found out the brick was in good condition,” says Wilkins. 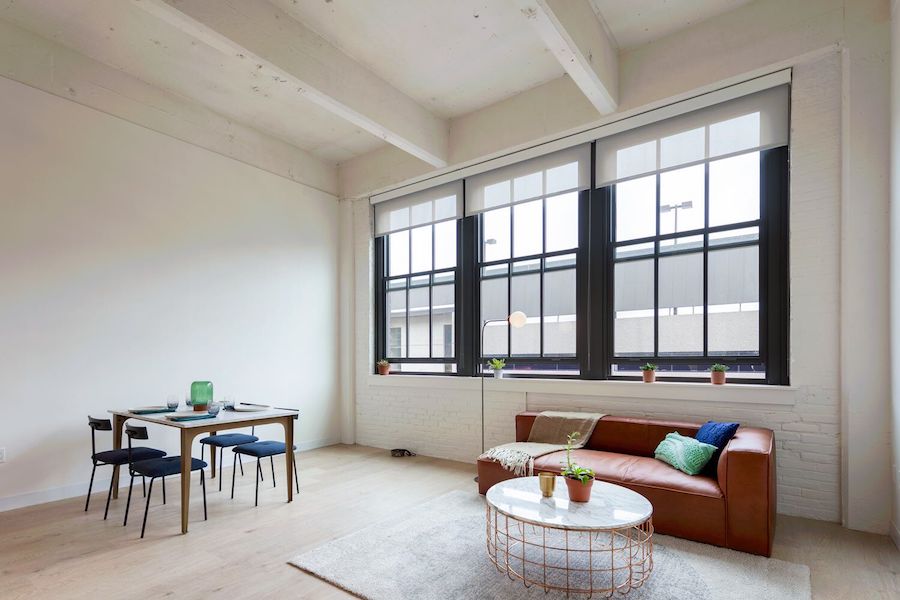 New energy-efficient windows in the style of the originals add to the apartments’ industrial-loft feel, as do the exposed 14-foot-high ceilings and air-conditioning ducts. 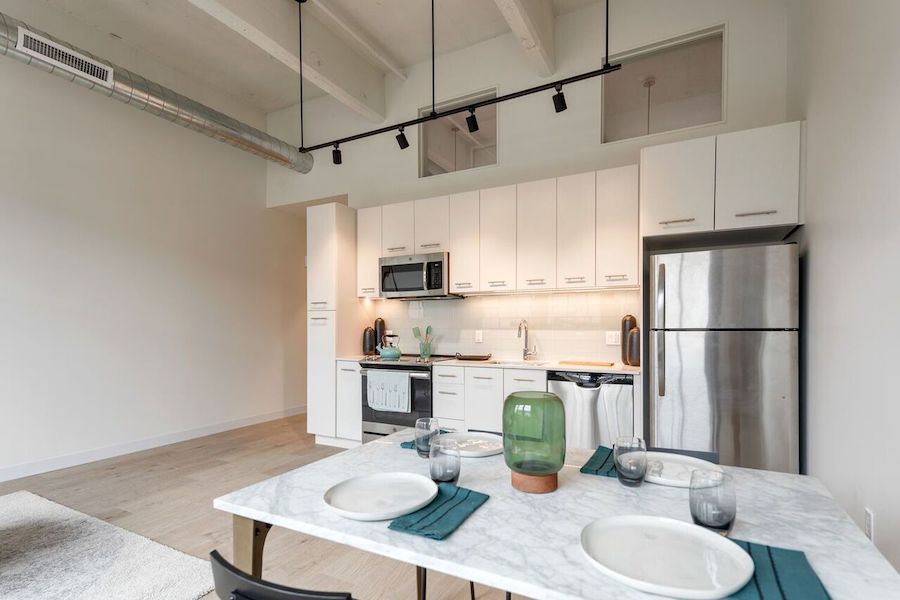 The kitchens, of course, are totally modern. 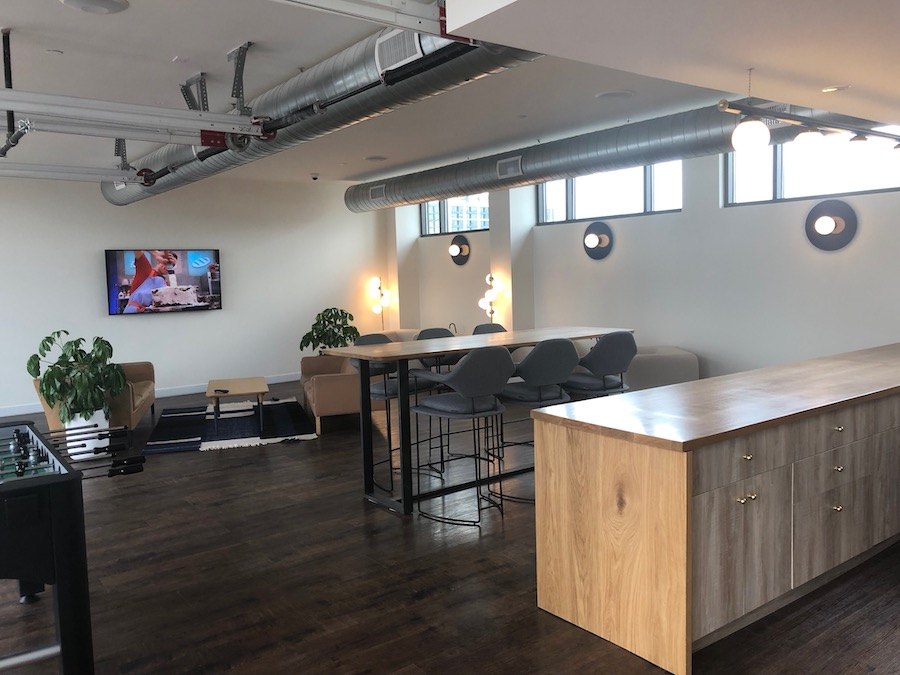 You’ll also find that “middle shade” blue on the bar walls, tile and upholstery in the top-floor residents’ lounge. It’s designed to be an indoor-outdoor space, with large garage doors that can be rolled up in good weather. 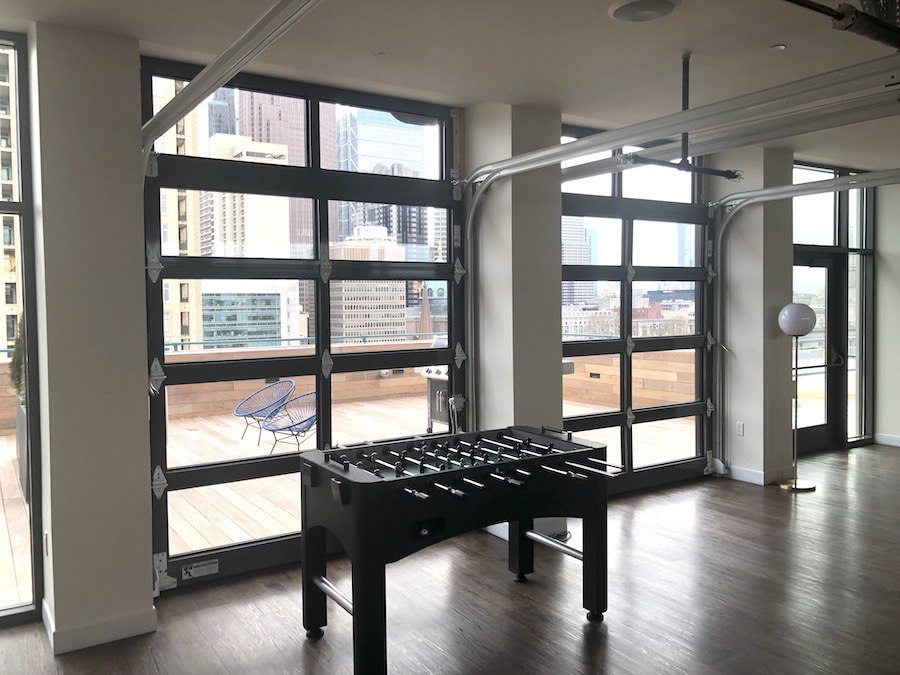 The garage doors and deck 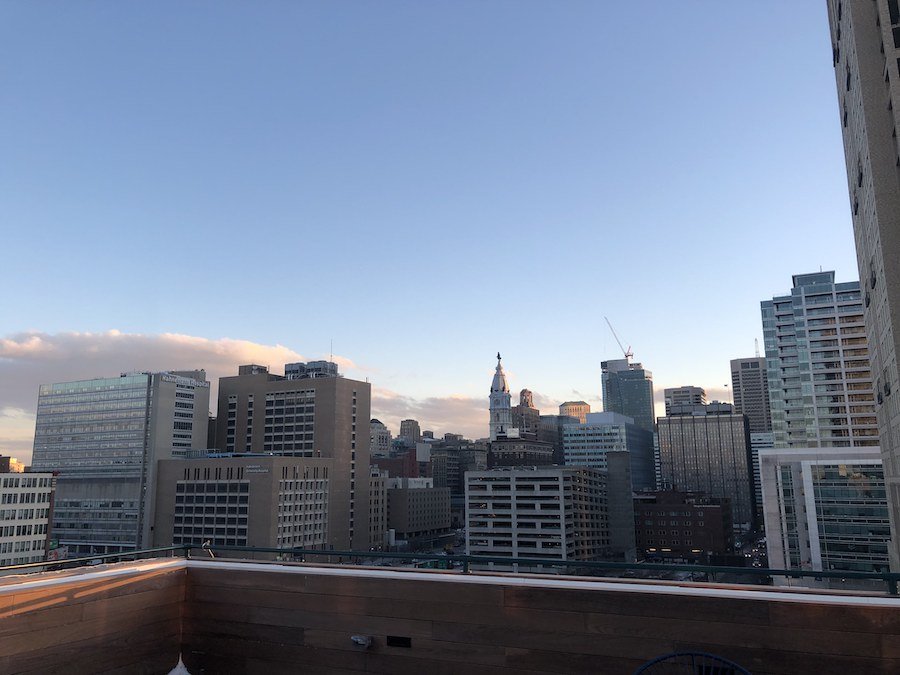 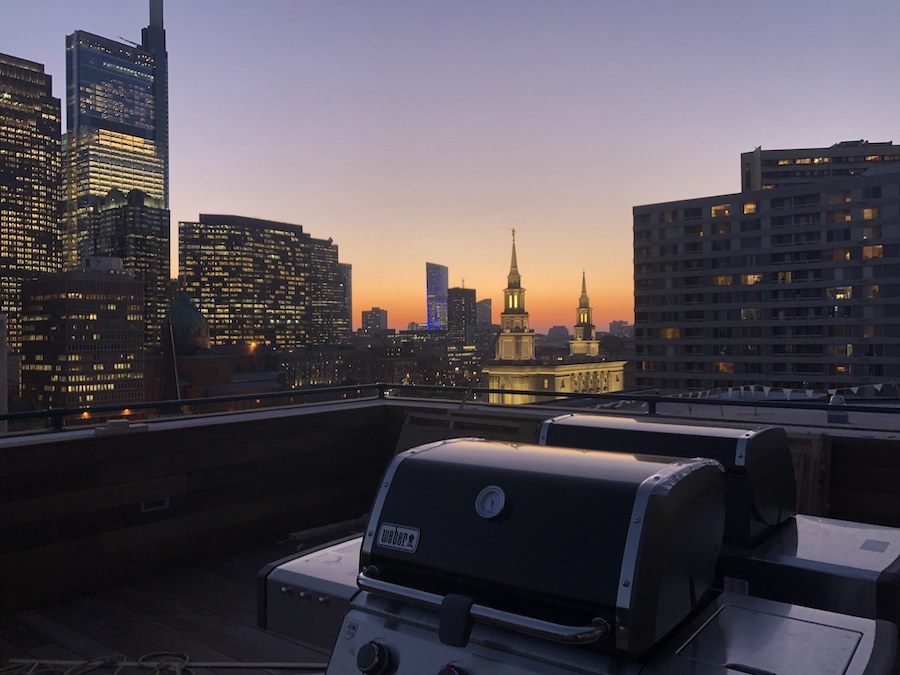 View to the southwest at dusk

The deck on the other side of those garage doors offers beautiful, up-close-and-personal views of the Center City skyline as well as views to the east and west. It has grills already, and a fire pit and plants to ring it are on the way.

The building also has parking built in: it has a garage on its street and mezzanine floors in the rear.

Sixteen Hundred Lofts By the Numbers

Number of units: 95 studio, one-bedroom, one-bedroom with den, and two-bedroom units; ranging in size from 504 to 1,225 square feet. Sonder Philadelphia has 41 of these units on the first three floors and will offer them as furnished flexible-stay apartments

Number of parking spaces: Not available; access-controlled garage in rear of street and mezzanine floors, accessed via original garage doors on Callowhill Street

Other stuff: Building is pet-friendly; garage spaces cost $250 per month