East Market: 3 Buildings Down, 3 to Go

Now that the first phase of National Real Estate Development's mixed-use project on the Girard Square block is substantially complete, work is beginning on the second. 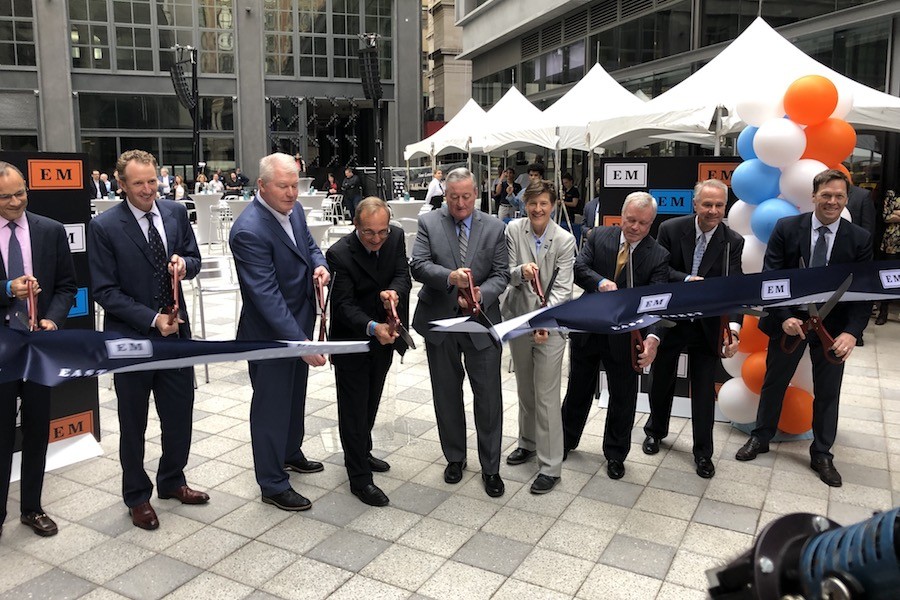 The East Market ribbon-cutting marks the figurative halfway point in the project, which aims to transform the entire Girard Square block from 11th to 12th streets, Market to Chestnut, into a mixed-use live/work/play environment that will draw not only neighbors but visitors from beyond the immediate vicinity. So instead of reporting on what the dignitaries said at yesterday’s ribbon-cutting, what you’ll get here is a status update on this massive $800 million transformation-in-progress.

Work is complete on two of the three Phase One buildings: The Ludlow, an all-new apartment building with retail on the bottom two floors at 11th and Market, and 1100 Ludlow, the converted former Family Court (and before that, Community College of Philadelphia, and before that, Snellenburg’s department store) building most recently known as 34 South 11th St.

There is still a little work left to be done on the last of the Phase One structures: a construction elevator is still attached to the southeast corner of the second apartment tower, The Girard. Dan Killinger, managing director of National Development, says the construction elevators should be gone by next month, when model apartments will also open for inspection. Pre-leasing of the apartments is already underway.

AT&T and T.J. Maxx are already open in The Ludlow, the first of the two Phase One apartment buildings to be completed. Mom’s Organic Market occupies the street-level space in the Design Center Philadelphia building across Ludlow.

Joining these six tenants within the next few months will be District Taco and City Fitness. District Taco representatives at the event said that their outlet should be open for business in December as well.

T.J. Maxx and City Fitness occupy second-floor retail spaces in their respective buildings. Without citing these specifically, Mayor Kenney noted at the ribbon-cutting that the East Market project shows that second-floor retail “can be and is viable in Philadelphia.”

While Killinger did not provide exact figures, it appears that more than half the total leasable retail space in Phase One has been spoken for. The two-story space facing 11th Street that was once to have housed Design Within Reach remains unleased, as does all of the space facing Ludlow save for what Mom’s occupies. 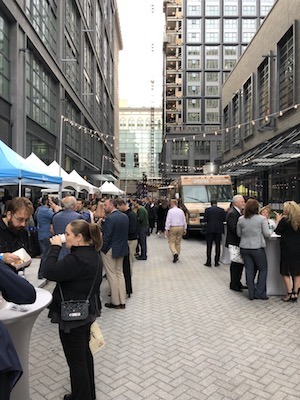 The East Market block party that followed the ribbon-cutting

Filling the space along Ludlow will be key to fully realizing National Development’s vision for the street. A block party that followed the ribbon-cutting, however, offered a simulation of that vision. “We said it was going to be about placemaking, we said it was going to be this unique spot in Philadelphia where people would want to live, shop, dine and go out on a Thursday night and grab a beer because there’s a party happening on Ludlow Street. Tonight’s the first night of those parties,” Killinger told the crowd assembled for the ribbon-cutting.

Currently, 150 of The Ludlow’s 322 apartments have tenants living in them. The Girard adds another 240 units. Of those, 60 will be furnished short-term-stay units in the Roost Apartment Hotel’s third location. Amenities in The Girard are similar to those at The Ludlow, except for one: The Girard has a swimming pool on its third-floor terrace while The Ludlow does not. Killinger says arrangements are in the works where Ludlow residents will be able to use The Girard’s pool for an additional monthly fee.

Office and studio tenants at 1100 Market include Design Center Philadelphia, a collection of furniture, decor and fabric showrooms serving professional interior designers, and the Philadelphia offices of Wilkes-Barre-based Bohlin Cywinski Jackson architects. Together these two occupants fill three of the building’s seven office floors, which contain a total of 175,000 square feet of space. Mom’s occupies about 75 percent of the street floor’s 25,000 square feet.

Killinger said that work is already underway on the first Phase Two project, the conversion of the 1891 Stephen Girard Building at 21 S. 12th St. Interior demolition is complete, and the brick-and-stone exterior has been cleaned and repointed. He anticipates that reconstruction will begin in February or March of 2019. National Development is still in negotiations concerning a future use for the building; Killinger said the company would make an announcement when an agreement has been finalized.

National Development received demolition permits for the parking garage in the 1100 block of Chestnut Street last month. Plans for what will replace it are not as far along, but Killinger said that it will be simlilar to what got built in Phase One: two mixed-use buildings with lower-floors retail, underground parking and a pedestrian street separating the two.

The exact mix of residences, offices and retail space has yet to be determined. However, as demolition should take about a year to complete, Killinger said that the mix and the blueprints should be ready by the time demolition is complete. No start date for demolition has been set yet.

How it works financially

National Real Estate Advisors President and CEO Jeff Kanne, who also spoke at the ribbon-cutting, pointed out that two of the firms behind this project differed from other real estate investment and development firms in one key aspect.

Like any other for-profit developer, the firms seek to earn a good return on its investments in new real estate projects that they hope will outperform existing ones in the areas where they build. In the case of National Advisors and National Development, though, where the investment money comes from matters more than usual.

Its source is the National Electrical Benefit Fund, the pension plan for unionized electrical workers jointly run by the IBEW and the National Electrical Contractors Association. Thus, by investing in new projects, the two National firms also provide jobs for union construction workers while ensuring that their pensions are adequately funded. Killinger described it as “a win-win-win situation.”

The third winner, in this case, being the city of Philadelphia. It gets a development that attracts new residents and businesses, creating more jobs in the process and hence more revenues for City Hall.

Along with National Advisors, Joss Realty Partners of New York and two Philadelphia real estate investment firms, Young Capital LLC and SSH Real Estate, co-own this development. Joss, SSH and Young bought the 75-year lease on the site from Trinity Capital Partners in 2008, then brought National Development in as its development partner. Trinity leased the land from the Estate of Stephen Girard, which owns it, in 2007. The estate is controlled by a city agency, the Board of City Trusts, whose administrators are appointed by judges of the Court of Common Pleas.