For this year's DesignPhiladelphia festival, the Elfreth's Alley Association's home got the designer treatment in order to show that yesterday and today can play nice with each other. 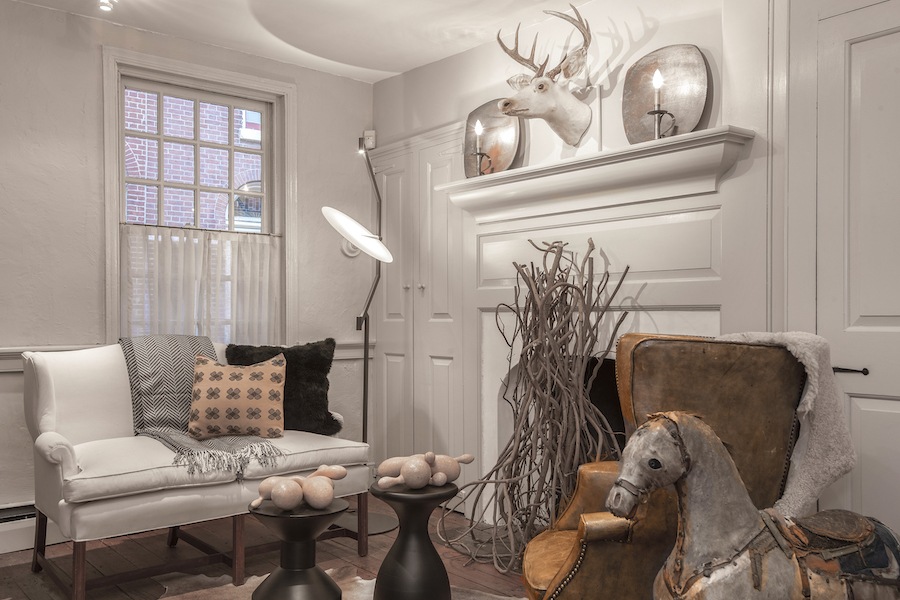 Which of the items in this photo are antiques and which are new? The answers might surprise you. | Photos: Ann Broder via Elfreth’s Alley Association

Most of the homes on Elfreth’s Alley, the oldest occupied residential street in the nation, remain private residences. This means the hordes of tourists who walk up and down the block each year only get to see their outsides.

But this month, as part of the 2018 DesignPhiladelphia festival, 124 Elfreth’s Alley, the association’s headquarters, has become a house museum that shows visitors what living on Elfreth’s Alley is like in the 21st century.

Or what living in any historic home could be like, for that matter.

The point of the designer show house put together by 36 Craven, an Old City-based design studio owned by Elfreth’s Alley Association President Neil Frauenglass and his partner George Case, and Millésimé, the Old City furniture gallery owned by Jinous Kazemi, is to demonstrate that Colonial-era houses need not be period pieces.

By juxtaposing antiques and found objects with Millésimé’s sleek contemporary furniture and artwork by contemporary artists affiliated with The Clay Studio, 36 Craven has created a house that offers a thoroughly modern take on history.

“We thought, ‘All these people come to the street, and they ask what it would be like to live in one of these houses, so we decided to fit one out,'” says Frauenglass.

36 Craven specializes in antiques, so Frauenglass and Case sought out a boutique that did the opposite to outfit this Elfreth’s Alley designer show house. “It’s important to mix old antique pieces with new modern ones. That’s why we went to Jinous and suggested we go together on designing an old house.”

“We did a very good job melanging the old with the new, so that it’s hard to tell what’s old and what’s new,” Jinous says.

Take a look at the photos of the finished product and see whether or not you can tell the two apart. Warning: The designers did throw a few curveballs. 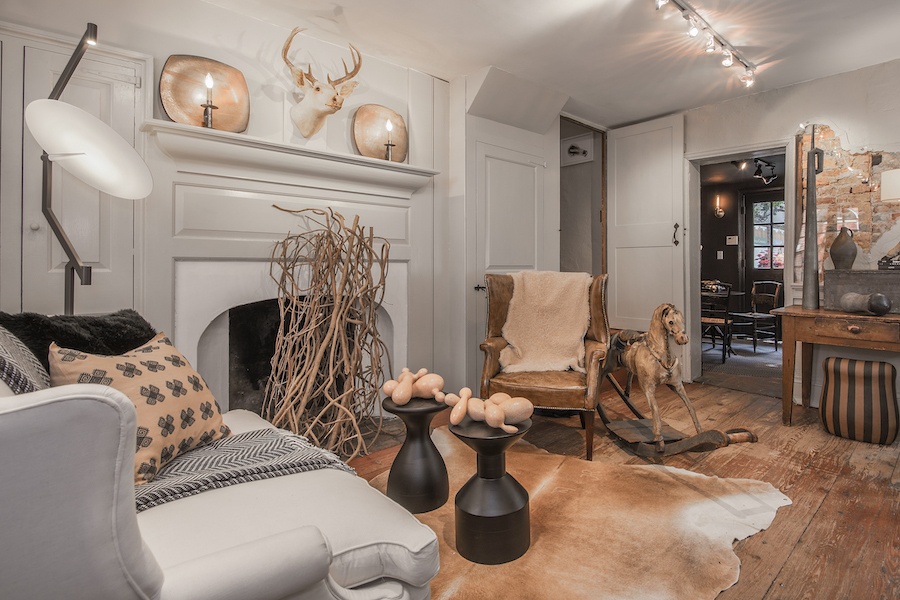 “I like working in small spaces,” says Case. “I was surprised by how much seating we managed to fit into this room.” What’s new: The Ligne Roset “Skia” floor lamp, left; the Ligne Roset bottle stools, here repurposed as tables and topped by sculptures from Clay Studio artist Raymond Rorke. What’s old: The wingback armchair, a 1950s reproduction of an 18th-century classic design; the antique rocking horse, horn and bundle of sticks; the candelabra on the fireplace mantle. What’s old but looks new: The sofa in the foreground, which was made in 1900 and reupholstered by 36 Craven. What’s new but looks old: The clay plates behind the candelabra that give them the appearance of 18th-century wall sconces, designed by Stewart Gair at The Clay Studio, and the clay jars and pots next to the horn. 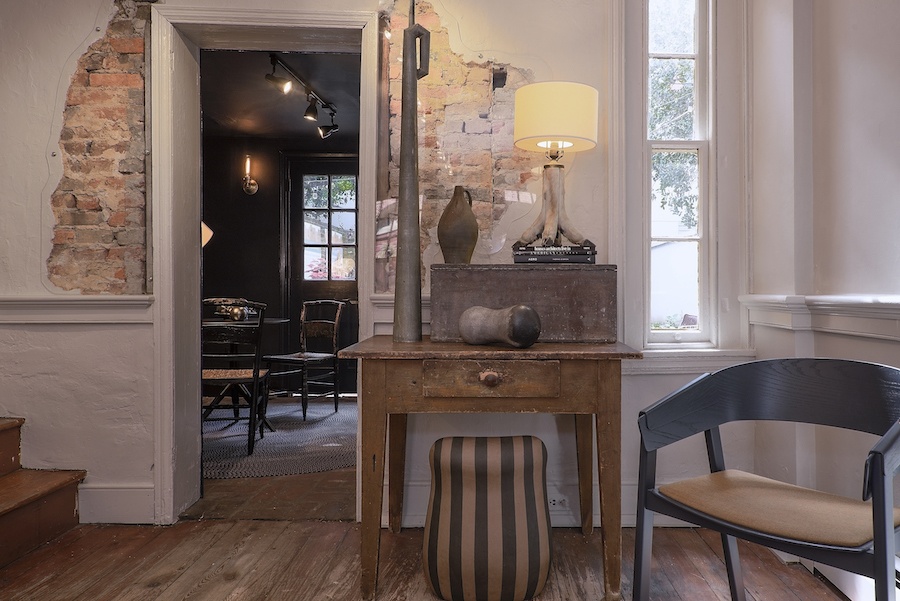 Exposed brick with a purpose: Besides giving the living room a distressed-chic appearance, the partly-stripped walls around the door leading to the former kitchen reveal the house’s evolution over the years by showing where an addition joined the original structure. In the foreground is one of two Muuto cover armchairs in the room. These are updates of a classic midcentury modern design and come from the Millésimé collection. 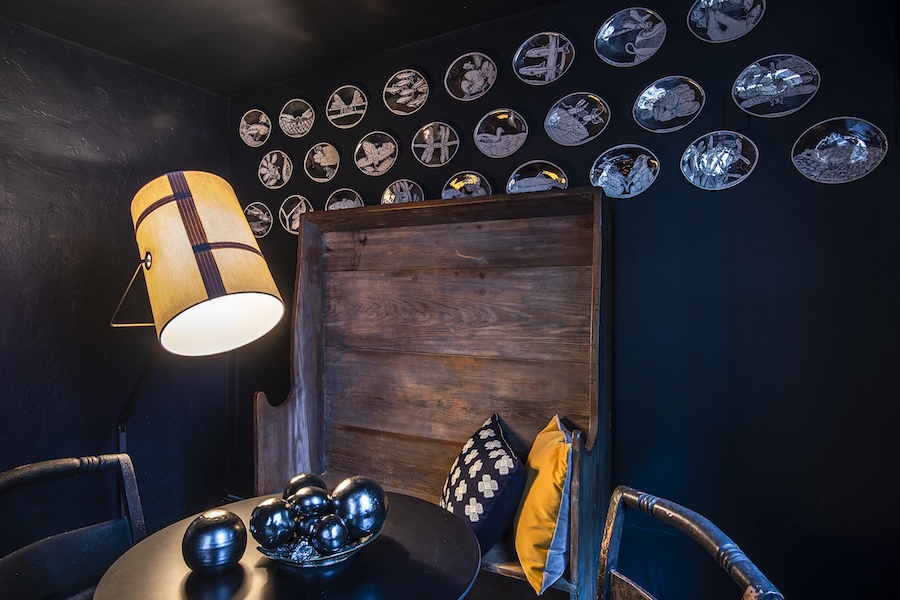 Where else would you display dinner plates but in the kitchen? These are no ordinary dinner plates, though: they’re plates custom-made by Clay Studio artist Julia Galloway that depict the Commonwealth’s endangered species. There’s one for each of Pennsylvania’s 67 counties in the collection.  A “Fork” floor lamp from Diesel by Foscarini shines a light on the dining table, which is surrounded by antique chairs and benches. 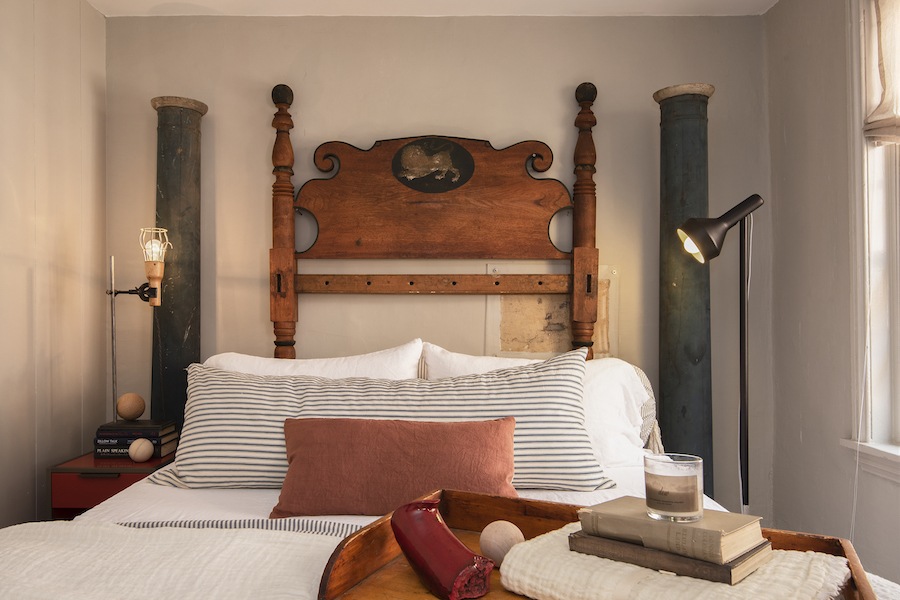 “We tried to get a Cassina bed up here, but we were defeated” by the house’s tight spiral staircase, says Frauenglass. Yes, this home is an 18th-century trinity, one of the earliest examples of this uniquely Philadelphian house type. Instead, the design team put a standard queen-sized mattress — which they did get up those stairs — atop a split box spring that could also be carried up them. They then hung an antique headboard above the bed. The reclaimed columns finish the ensemble. The lamp on the left is a vintage industrial lamp from the 36 Craven collection, while the one on the right is a contemporary Ligne Roset model from Millésimé.

There’s more to see in the house’s rear courtyard, but you’ll have to go there yourself to see what’s new and old back there.

The Elfreth’s Alley Designer Show House is open from noon to 5 p.m. weekends through Oct. 21. A suggested donation of $5 goes to benefit the Elfreth’s Alley Association’s ongoing work to preserve and protect this National Historic Landmark residential block.