The Destination Maternity warehouse transformation was just the first phase of the project. The last one, the firm hopes, will be the first thread in the fabric that knits Northern Liberties, Old City and Callowhill together. 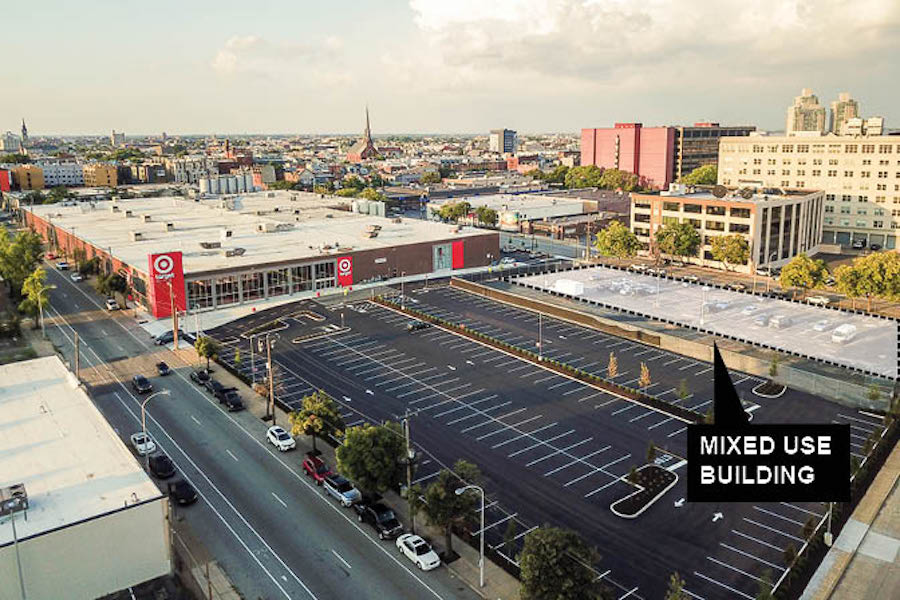 The opening of the Northern Liberties Target was the end of the beginning for the SoNo project. Things should get a lot more interesting from here. | Image and renderings: ISA

Two weeks ago, officials of Alliance Partners HSP and Target Corporation were all smiles as they cut the ribbon on the new Target store in Northern Liberties.

That ribbon-cutting marked the successful completion of Phase One of Alliance HSP’s SoNo project: the conversion of the Destination Maternity warehouse on Northern Liberties’ southern edge into a mixed-use industrial/commercial/retail/restaurant space that gave the neighborhood two new community amenities.

But that was just the beginning. The end, the commercial real estate firm hopes, will be even more exciting.

At the same time that Alliance HSP was celebrating the opening of the Target store, it was prepping for the next two phases of SoNo. The second phase is largely an interlude that will make the existing building on the site more attractive. The real game-changer comes in the third phase: residences at SoNo that, combined with ground-floor retail, will serve as the first step in transforming southern Northern Liberties, or East Callowhill, or whatever you want to call it, from a no man’s land into a true bridge between Northern Liberties and Old City.

A little help from some new friends

To realize this vision, Alliance HSP turned to two firms with experience doing residential work in the area. The residences at SoNo will be a partnership between Alliance HSP, Havertown-based residential developer Callahan Ward Companies and architectural firm ISA, which was born in South Kensington 13 years ago.

“Historically, we’ve done mostly office and industrial projects,” says Matt Handel, vice president for acquisitions and leasing at Alliance HSP. “For this site, our first urban transaction in the city of Philadelphia, the new zoning that was in place on the site made residential one of many options for the site. So as the project came together, we saw there was some opportunity to reserve some space for a future mixed-use development.

“It was kind of a no-brainer, as the development rights were already there, and we thought that this was the highest and best use for the land. But because [residential]’s not an area we have a ton of expertise in, our investment partners were only interested in doing residential with a strong residential partner. That’s how the partnership with Callahan Ward came to be.”

A departure for the development partner too

The residences at SoNo project is also a departure of sorts for Callahan Ward, which up to this point has built exclusively residential projects. But the duo who comprise the company’s heart was as eager to jump into this project as Alliance HSP was to have them on board once they were brought together.

“When we first met with Alliance and Matt, it was clear that they were interested in residential and that they saw the opportunity to create something more than just commercial space [at Fifth and] Spring Garden,” says Marcus Toconita, director of production at Callahan Ward. “The site specifically appeals to us. We call it ‘the hole in the doughnut.’ There’s Northern Liberties to the north, Old City to the south, the emerging Callowhill district to the west and this underutilized land right around this.” 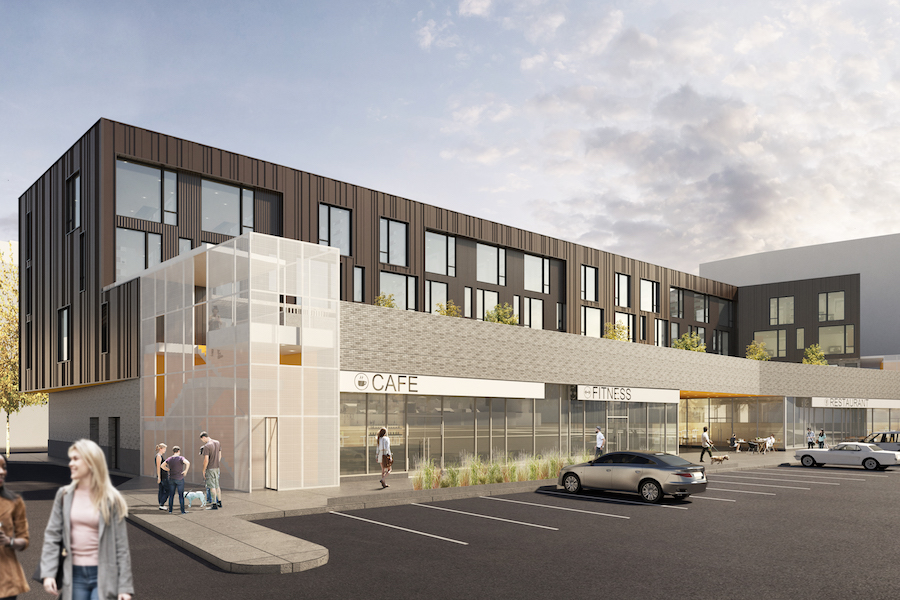 The west, or parking-lot-facing, side of the mixed-use building. The retail tenants get the parking they want, and the residents get a front lawn and gorgeous views of the sun setting over the Center City skyline.

What the partnership plans to fill the hole with is some pretty sweet jelly indeed. The structure ISA designed for the joint venture combines 11,000 square feet of commercial space, mostly retail, with 50 apartments. What sets it apart from other projects of this type, though, is how the commercial and retail space interact.

The commercial space, most of which fronts on the parking lot, forms the base of a 10,000-square-foot landscaped terrace that serves as the “front yard” for the three stories of residences above it. Callahan Ward Director of Development Nino Cutrufello refers to this as “the plinth.”

What this raised terrace does is take advantage of its site’s terrific sight lines. “Even at the sidewalk level, there’s an unobstructed view of the skyline,” Cutrufello explains. “With this elevated plinth, the experience of the residents will be that they will walk out of their residences to this quarter-acre landscaped yard, and they’ll have this great view of the skyline. The parking lot will fade into the background as they look at the view.”

Residents and a come-on to enliven Fifth Street

Another way the project will engage the residents with that view is by having most of them access their units by ascending to the terrace first from a lobby on the parking-lot side of the building. The exceptions are the lower-floor units fronting on Fifth Street; they will have street entrances, part of the way the building will activate that thoroughfare. One of the units will incorporate a glass-fronted space at the point where a passageway through the building will connect Fifth Street with the parking-lot-facing retail. 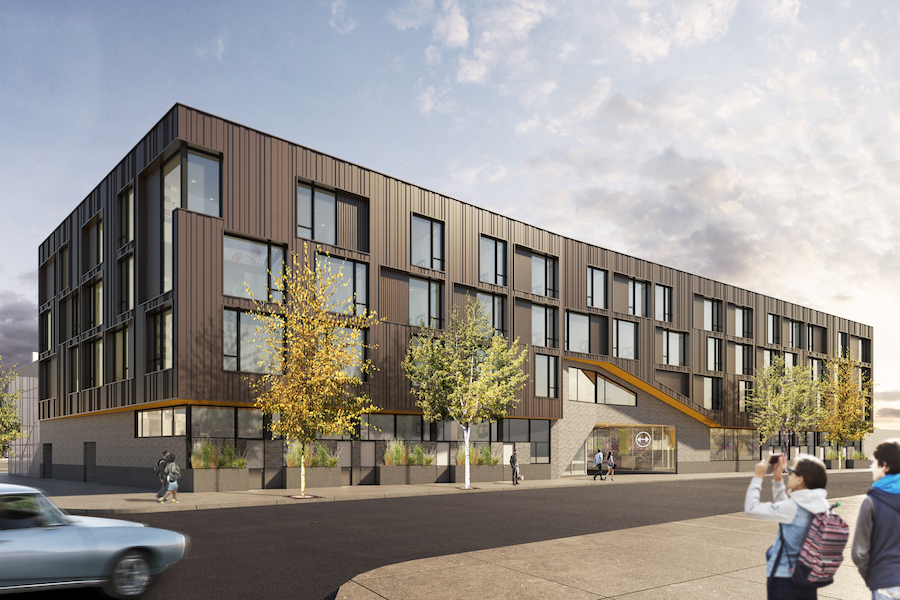 The Fifth Street elevation. Here residents do the bulk of the street activation, but a hole in the middle of the street floor serves as a teaser for the other side.

“It’s a dwelling unit that’s designed to allow for other activities at the edges,” explains ISA Principal Brian Phillips. The glass-front space, he says, would be ideal for “home office work or creative pursuits that would benefit from that street presence.

“The program and the site are extremely fascinating to us,” he adds. “The project has the chance to plug the gap between Old City and Northern Liberties.”

The multiple demands being placed on this space led ISA to take this unorthodox approach to combining its multiple uses. The project, Phillips says, “tends not to play by the rules of what a project of this type should be — it’s a residential project between a high-speed arterial and a Target parking lot. We wanted to deliver a building that didn’t look like it was on the site it was.”

How to make virtues out of necessity

For his part, Handel notes that this project is also unusual in the amount of retail space it offers: 20 percent of the building’s total interior square footage is given over to commerce. “It’s not common for a project of this type to have that much of its space devoted to commercial,” he says.

That, in turn, is what made the parking-lot orientation of the retail space important. As anyone who has walked past Tower Investments’ nearby retail-only project at Second Street and Girard Avenue can attest, retail tenants faced with a choice between orienting their space to a street and orienting it to a parking lot will choose the parking lot. (This actually represents a failure of imagination on the part of the tenants, who could come up with interior floor plans that make openings on both sides possible. But those same tenants often regard such setups as less secure, and educating them on why that might not be the case will take time.)

This design, then, seeks to resolve some built-in tension among multiple competing demands: Produce retail space that’s alluring to tenants. Activate a dead zone on a street that pedestrians don’t venture down at present. And offer the residents an apartment building that they would feel comfortable living in.

All of the partners are banking on the idea that topping a strip mall with residences and a park, and that putting elements of both the strip mall and the residences on both sides of the project, will meet these multiple demands and tie not only this building but the larger SoNo development more firmly to the more residential district to its north and the more mixed-use one to its south while pulling the emerging mixed-use district to the west further east.

If it works, expect to see Alliance HSP try the same thing at future development sites in this city.