Philly Housing Is Affordable. Just Not for the Typical Philadelphian.

A survey that compared household income to living costs for owners and renters found that neither group had money left over after covering all their expenses here. Renters, of course, found themselves deeper in the hole. 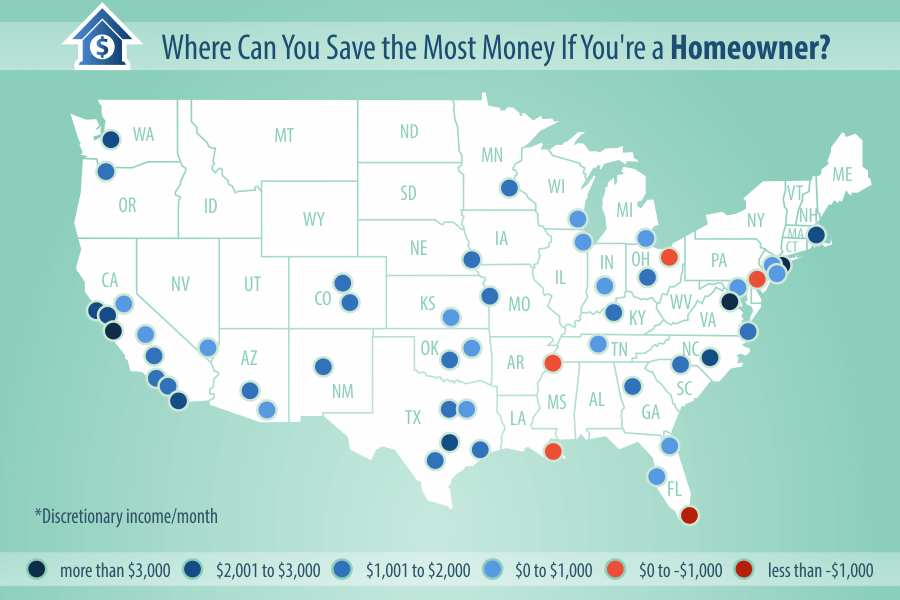 Net savings (loss in red) for homeowners in the 50 largest US cities. | Images: PropertyShark / RentCafé

PropertyShark and RentCafé recently conducted a study comparing 50 of the biggest cities in the United States and reported which cities allow owners and renters to save the most money after paying living expenses. Manhattan was on the good list but Philly wasn’t.

Of the 50 cities analyzed, 44 of them allow homeowners to save at least a little money at the end of each month. Philadelphia, Miami, Detroit, Cleveland, New Orleans and Memphis were the outliers. You can actually save more living in Manhattan than living in Philadelphia.

In Philadelphia, the average homeowner ends the month $719 in debt. And renting’s even worse. After paying rent and living costs, renters are generally $1,303 in the hole each month.

Now this discrepancy between homeowners and renters was a pretty common trend in this study. That’s because homeowners tend to be older than renters, earning more money. Homeowning households are also more likely to be married, which means they can put two incomes to work on living expenses while single renters can’t.

This study determined spendable income by subtracting living and housing costs from the median household income (which was obtained from Census data). According to PropertyShark, “living costs were calculated by multiplying the monthly national living costs—which are calculated by the U.S. Department of Labor—with the NUMBEO Cost of Living Index.”

The NUMBEO index is set so that the cost of owning or renting a home in New York equals 100. Philadelphia’s indices work out to 83.46 for homeowners and 48.09 for renters.

That sounds great, doesn’t it? Philadelphians get a leg up with lower overall living costs. The problem is, their median household incomes are even lower.

According to this study, the median Philadelphia home-owning household brings in $4,357 a month, but when this is compared with housing costs that average $874 a month and other living expenses totaling $4,202, that household is still losing $719 each month.

According to PropertyShark Marketing Communications Specialist Esther Racatean, “for both owners and renters [in Philadelphia], monthly income is lower than in other cities, and this is also the case when compared to the NYC boroughs included in our study. Living and housing costs in Philadelphia are also lower, but not enough to make up for the income gap.”

Homeowners in Philly, however, may be able to trim their way out of the hole. The items that go into the NUMBEO index include “everything from food to childcare, sports and leisure, transportation, healthcare, entertainment, personal care and services, reading, education, tobacco products and smoking supplies, cash contributions and personal insurance and pensions and other miscellaneous costs,” according to PropertyShark. If you smoke, for instance, cutting out that expense is likely to put a huge dent in that $718 deficit. Choosing less expensive service providers, or doing things yourself, will also trim those expenses. 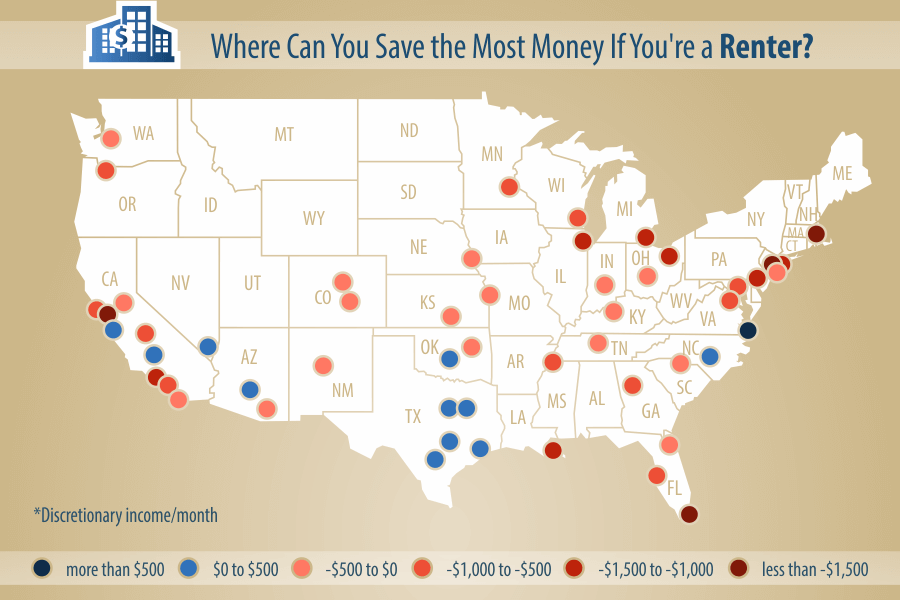 Net income (loss in red) after all expenses are covered for renters in the 50 largest U.S. cities.

Renters, sad to say, don’t have it that easy, a situation reflected in the fact that while homeowners in only six of the 52 places (the New York boroughs of Manhattan, Queens and Brooklyn were each considered separately) couldn’t break even on their expenses, renters in only 12 of the 52 still had money left at the end of the month. The rent figures for Philadelphia could also skew upward because RentCafé based them on rents for buildings with 50 or more units.

Saving money is always hard, but it’s even worse when it feels like your rent and income are working against you. If you’re a renter looking to save more money, you might consider Virginia Beach, Va.; Austin, Texas; Bakersfield, Cal., or Raleigh. N.C. If you’re a homeowner, Manhattan, San Jose and San Francisco are the best places for you – provided you earn the high household income needed to swing the mortgage on a median-priced house.

Hopefully you already have a strategy for saving under your belt, but if you are still really struggling to save, consider where you’re living. It’s scary to move, but it might be the right choice for you.