The Frankford Arsenal Takes the First Steps in Its Third Life

A new owner has taken over several of the Army arsenal-turned-business center's buildings and is restoring them for a new mix of tenants, with more changes envisioned down the road. 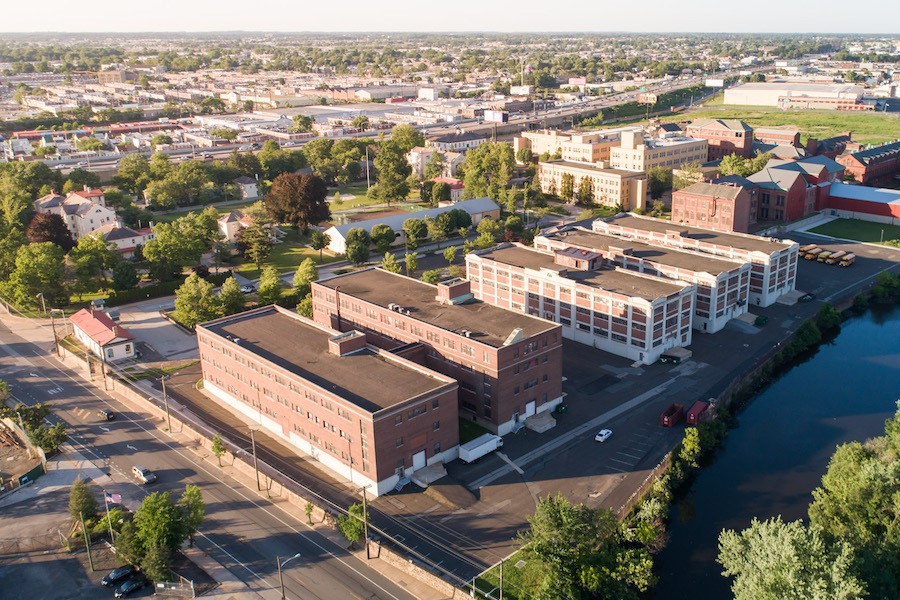 The five buildings in the foreground of this aerial photo of the Frankford Arsenal are being restored by Alliance Partners HSP as flex space for commercial and light industrial tenants. The guard house to their left will become a new community amenity for both workers and neighbors. | Photo: Courtesy Alliance Partners HSP

The Philadelphia Naval Shipyard may still have ties to its military past, however attenuated they may have become. But in the hearts and minds of many Philadelphians, it’s the Frankford Arsenal that holds historic pride of place.

This facility on the edge of Bridesburg was literally “the arsenal of democracy” for most of the 202 years it’s been in existence. Its closing in 1976 may have cost Jimmy Carter his Presidency, and since then, private developers have acquired portions of the property with an eye on doing for it what the Philadelphia Industrial Development Corporation did for the Naval Shipyard.

The latest entrant to step up to the plate with a plan for the Arsenal’s revival is Alliance Partners HSP, which has acquired six of the buildings at the Arsenal site and is restoring them for use as creative flex space for commercial and light industrial tenants. 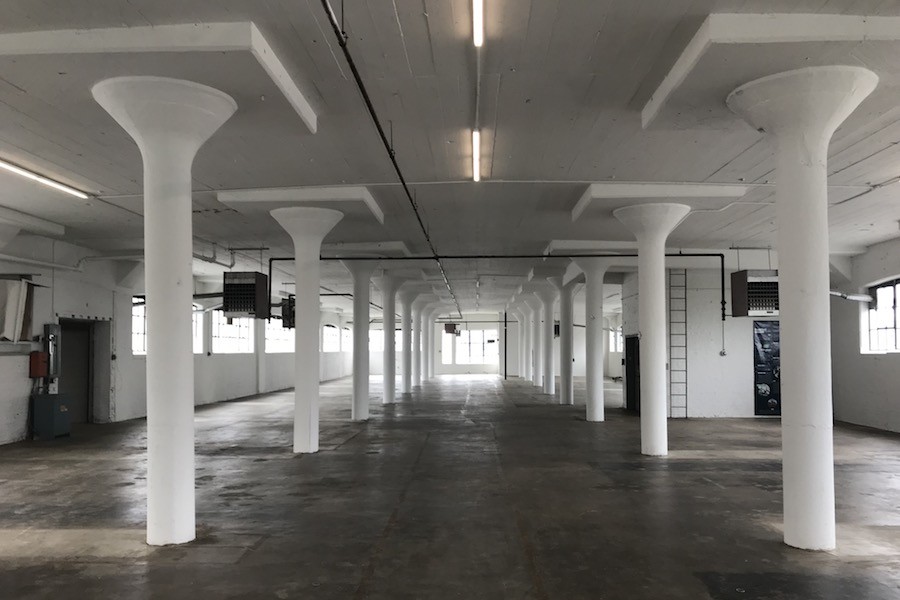 What you see in the photo above is 13,900 square feet of raw space. If you’ve ever wondered just how big one of those humongous Gladwyne mansions are, gaze upon this photo for a while, then imagine it carved up into all sorts of rooms.

For a commercial tenant, this kind of space represents room to make things, to store goods, to combine offices and shop under one roof in a convenient location.

And the Frankford Arsenal is nothing if not convenient. It’s a mere three blocks east of Bridesburg Regional Rail station and right next to the Bridge Street interchange on Interstate 95.

“I also like to point out that it’s just as far from Center City as the Navy Yard,” says Matt Handel of Alliance Partners HSP.

The site’s layout ensures security for all tenants and visitors, with gated entrances for both pedestrians and cars. Yet it also contains a building that Alliance hopes will serve as a bridge linking the working world on the inside with the community beyond the gates.

That building is Building 101, the gatehouse at the entrance to the Arsenal campus. Alliance will offer this space as a loss leader of sorts in order to help build a sense of community.

“To help activate the community, we are converting the old 1,675-square-foot Guard House into a campus café,” says Handel. “We are building out the entire front-of-the-house experience ‘on spec’ and will be offering the space ‘rent free’ to an operator we think brings the right concept to the Arsenal. I’m hoping to find a coffee roaster, food truck operator or craft brewery/spirits concept for the Guard House.” 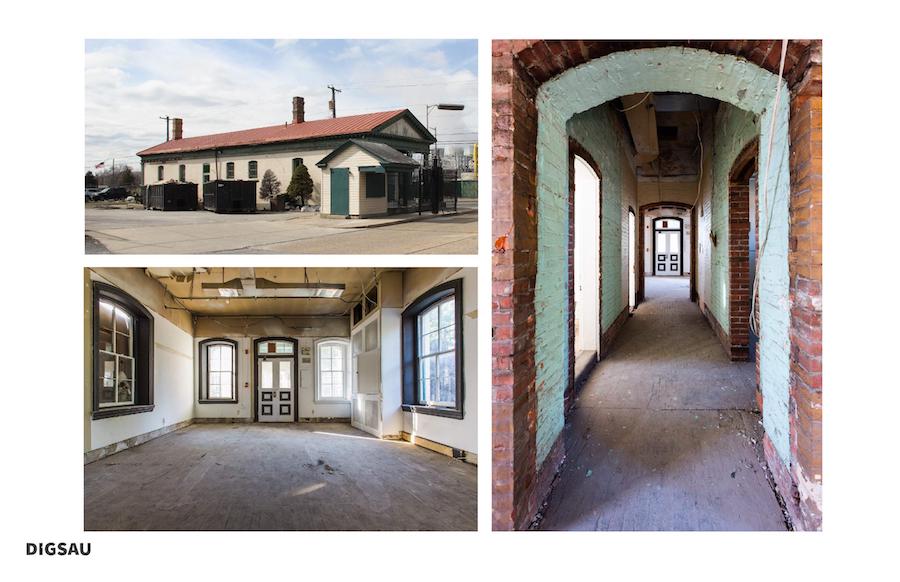 DIGSAU is in charge of designing the guard house for its eventual tenant.

Handel anticipates that the commercial tenants in the five light industrial buildings within the secure perimeter will find this space a useful amenity as well. But the commercial space appears to be selling itself already based on what it offers a potential tenant.

“As a firm, we are always looking for underutilized real estate assets,” Handel says. “After the success we had attracting tenants to the former Destination Maternity warehouse at 5th and Spring Garden, we evaluated a number of assets in Center City Philadelphia as well as the surrounding neighborhoods. 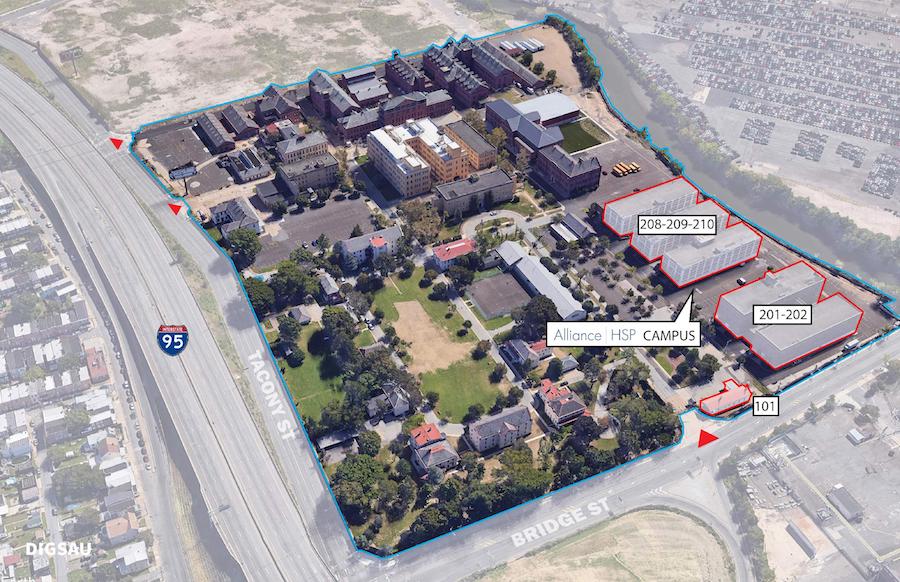 This illustration from a promotional brochure shows where Alliance HSP’s holdings are located relative to the entire site. All three of the vehicular entrances (red triangles) are gated and secured. | Image: DIGSAU

“When Colliers International introduced us to Bridesburg’s Frankford Arsenal campus, we immediately fell in love with the raw material and the unique campus environment. We felt that with all the positive momentum in the other River Wards neighborhoods, Bridesburg was ‘next in line’ and had a chance to attract a diverse commercial group of tenants seeking a smaller-scale Navy Yard-style environment.

“The 208,000 square feet of buildings we purchased work well for creative office, showroom space, urban manufacturing and specialty distribution. I think where they really shine is when you find a 3,000- to 13,000-square-foot tenant that is seeking to combine multiple uses under one roof. That space is very hard to find within 15 minutes of Center City, especially when you factor in proximity to transit, safety concerns and the ownership profile.”

The Arsenal’s basic design and its location takes care of all those last items, and anyone who’s hoisted a few at Yards Brewing Company’s tasting room will no doubt drink to Alliance’s capabilities when it comes to refashioning old industrial space for new uses. 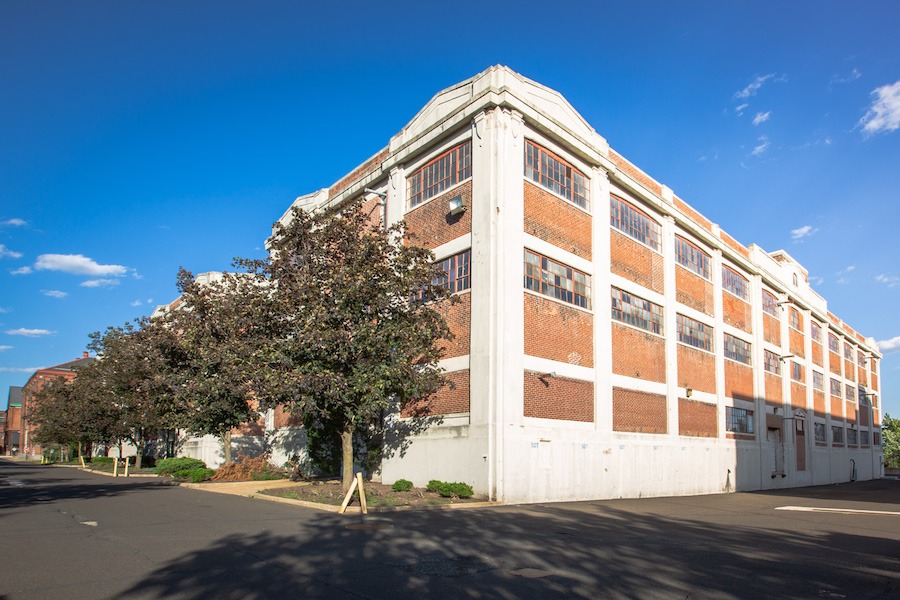 The five buildings in question are all examples of how the military responded to the need for more munitions production during wartime. But as building projects take time, they were ready right as the need wound down. Buildings 208 through 210 opened in 1918, just in time for the armistice that ended World War I, and Buildings 201 and 202 were completed in 1946, after Japan’s surrender brought World War II to an end.

These six buildings make up a small portion of the entire Arsenal site, which encompasses some 37 buildings in all, a few of those residential. There’s no word yet on what will develop on the rest of the site; that may depend on how quickly space gets leased in these first five buildings. We’ll keep you apprised as the renewal of the Arsenal continues.