The Cambria Gives Its Regards to Broad Street

The most recent addition to Philly's expanding hotel universe takes its design cues from the thoroughfare it sits on. 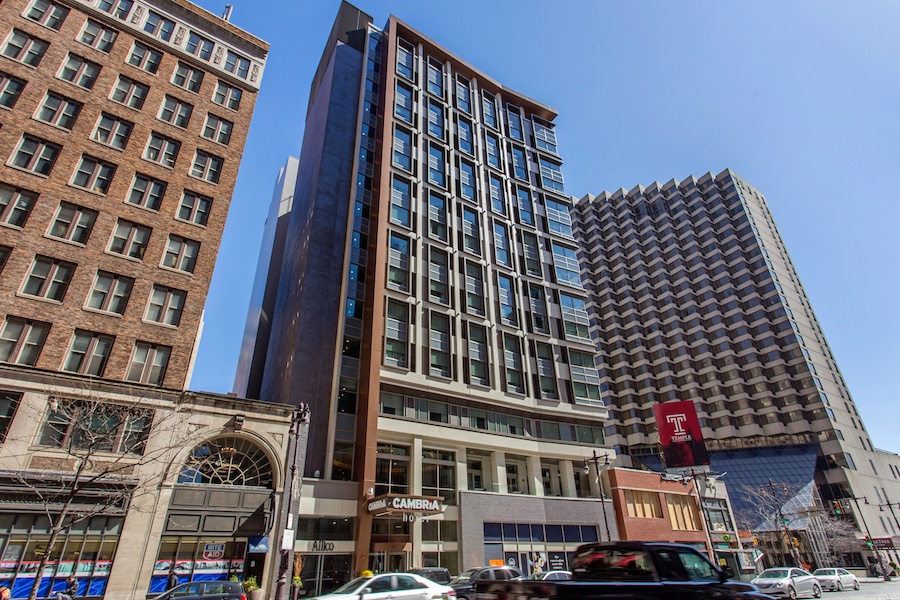 Not everything’s in place yet at the Cambria Hotel Philadelphia — specifically, its rooftop restaurant, Attico, won’t open until the end of August — but the rest of the hotel has been on its shakedown cruise and is now happily welcoming visitors to the city. It formally threw its doors open to the public June 30th with an opening reception in the hotel’s second-floor lobby bar and restaurant. And that space is as good a place as any to showcase what makes this hotel a distinctive addition to the city’s increasingly diverse array of lodging options.

In a world where travelers increasingly seek out those places and experiences that set where they’re visiting apart from everywhere else, the major hotel chains have sought to give their properties personalities to match. Some, like the Ritz-Carlton or the Aloft, get their local color by inhabiting the skeletons of discarded buildings and reanimating them with their own designs. New-from-the-ground-up hotels like the Cambria, however, have to build that local color into their facilities. 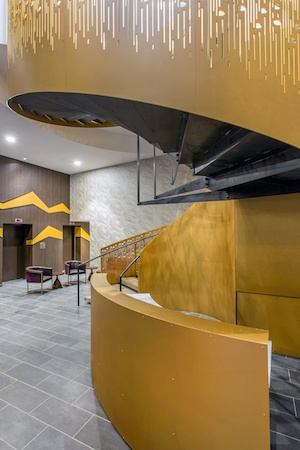 The spiral staircase leading up to the Cambria’s lobby.

“We like the inside of our hotels to reflect the neighborhood that they’re in,” Cambria General Manager Jerry Rice said on a pre-opening tour of the building. “So since we’re on the Avenue of the Arts, and we know this is the old music strip, the jazz strip, we have an intentional musical theme.”

The theme begins with the spiral staircase that guests who don’t opt for the elevators use to ascend to the lobby. The cutouts in the staircase’s bronze railing form a series of musical notes that ascend along with the guests.

But that’s just a warmup for the brass riot that greets guests in the lobby. The lighting fixtures over the tables resemble a lattice of trumpets, and over the bar hang six large bronze-coated metal tubes salvaged from a pneumatic-tube messaging system. (They now house the spotlights over the bar itself.) 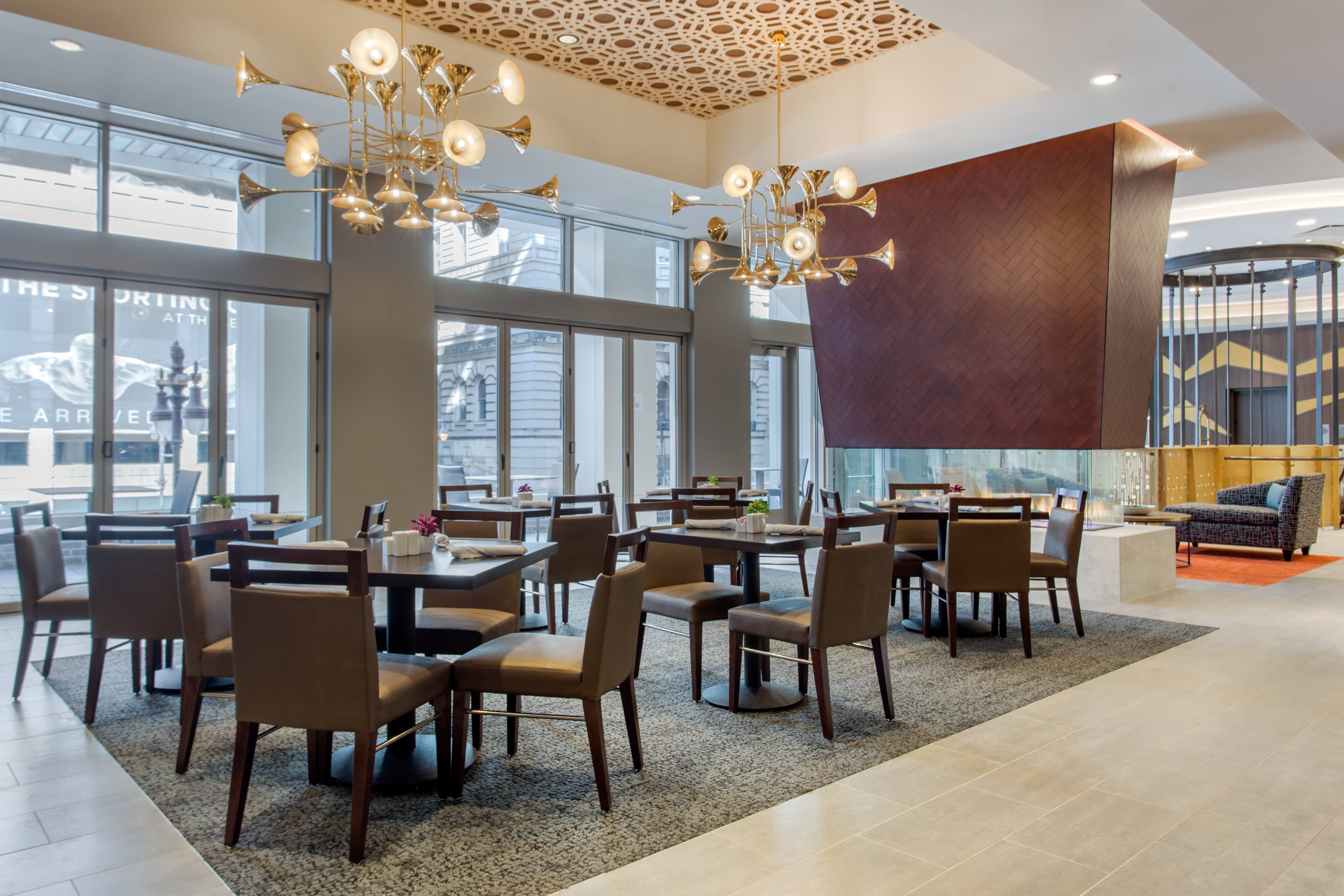 The center of the restaurant and bar is lit by lights inspired by trumpet bells. 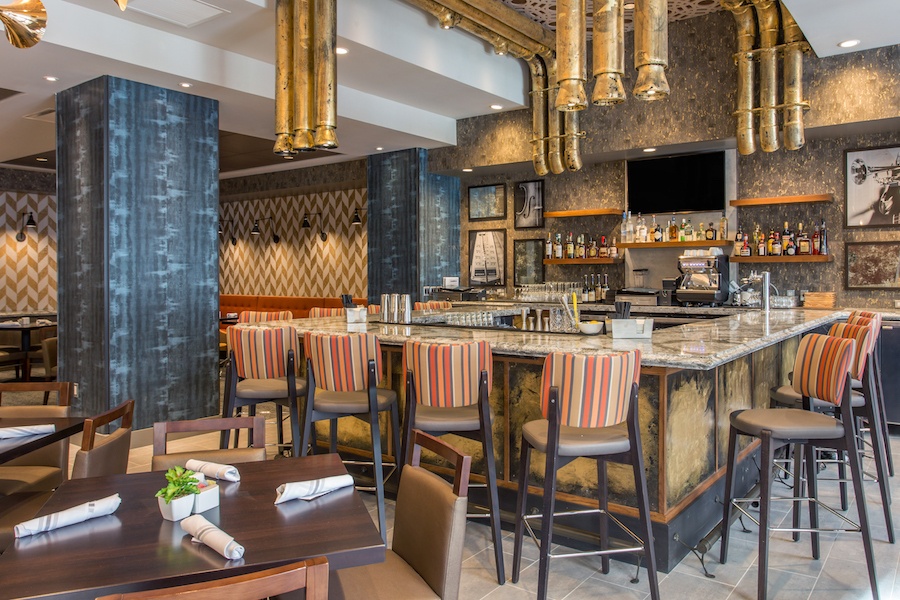 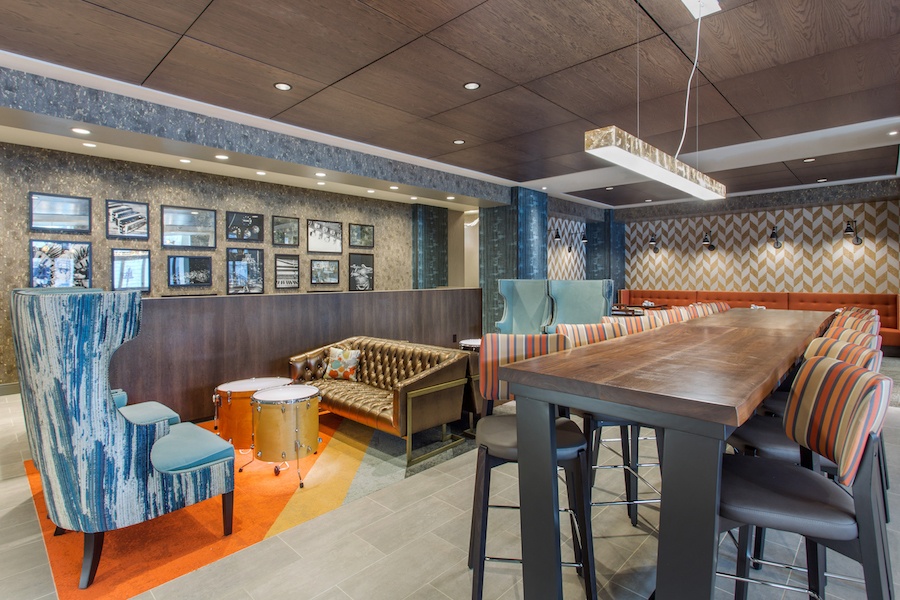 Drums form the coffee tables in the restaurant’s lounge area.

Complementing all these bright metal notes are golds, yellows, copper and orange tones on the walls and furniture, some of which has also been fashioned from musical instruments.

“You would probably never put this in your house, not in Philadelphia. But you would love it staying as a guest for a few days,” says Rice.

It’s all part of the plan, say both Rice and Janis Cannon, senior vice president for upscale brands at Cambria parent Choice Hotels.

“Our guest insights tell us the things [travelers] want to have that really help them be their best selves when they’re traveling,” Cannon says. “So we consistently deliver those things whether the hotel is in Los Angeles or Nashville or New Orleans or New York or Philadelphia. But we deliver them in a local and authentic way.”

That means local craft brews on tap in the lobby bar, for instance, in homage to this city’s love of craft beer. It also means bringing local talent in to give the place a signature style. In this case, that would be DAS Architects, a Philly firm that has made hospitality spaces a specialty. 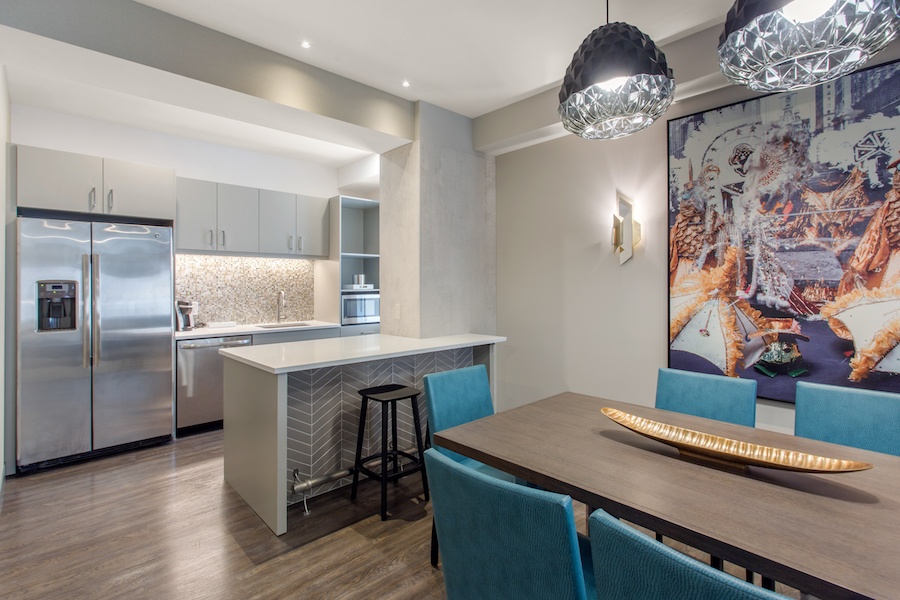 The extended-stay suites in the Cambria have kitchenettes and dining areas. This one is graced by a large photograph of the Mummers Parade.

The rooms themselves may not shout out “Avenue of the Arts” the way the public spaces do (though some do, thanks to photos of activities like the Mummers Parade), but they are thoughtfully designed and equipped for the upscale business traveler. 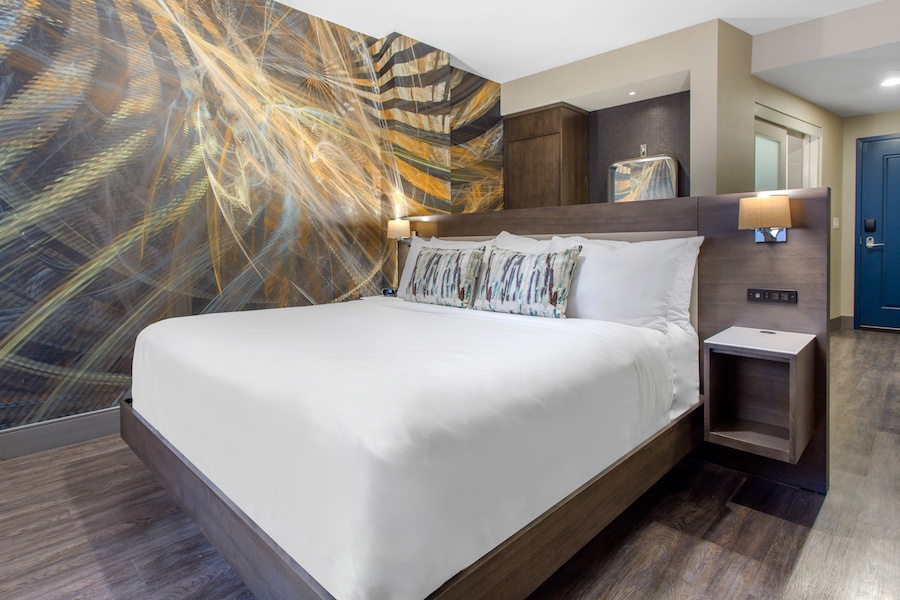 The headboard of the king-size bed in this room… 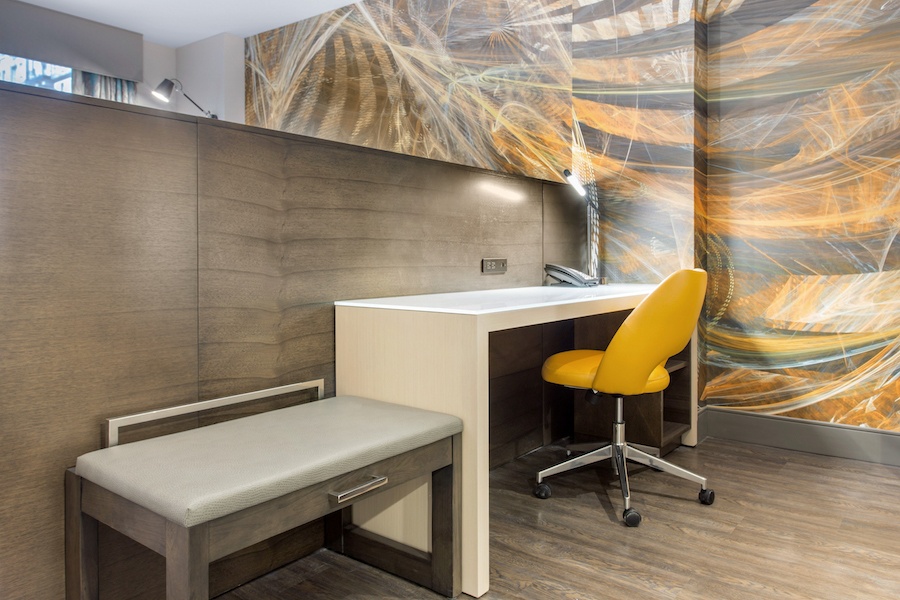 …doubles as the wall against which the work desk sits.

Some of them have a novel design that puts the workspace in an area behind the bed, with a low divider serving as both headboard and desk wall. The hotel also has suites with kitchenettes for those planning longer stays. The wood planks on the dividers, backboards and floors are also made from recycled materials. 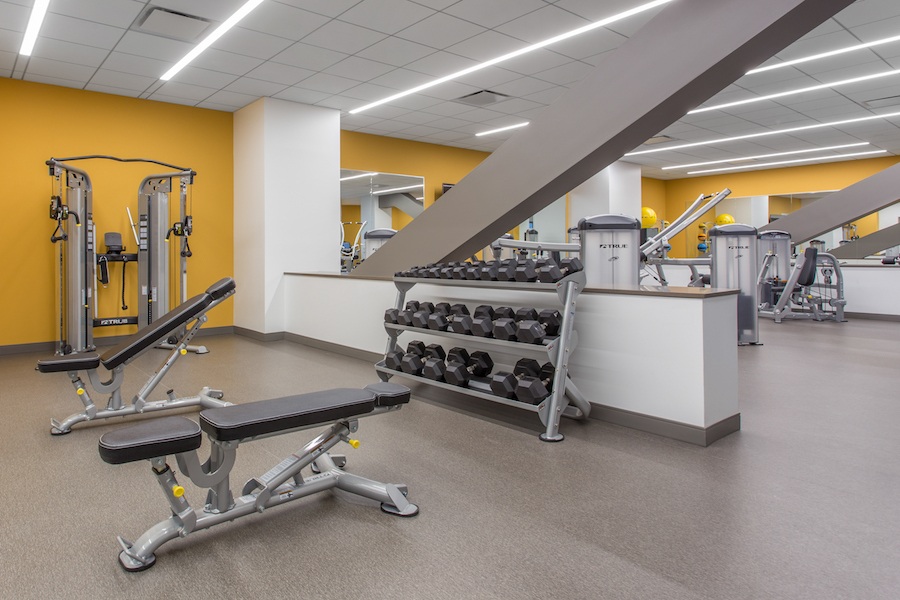 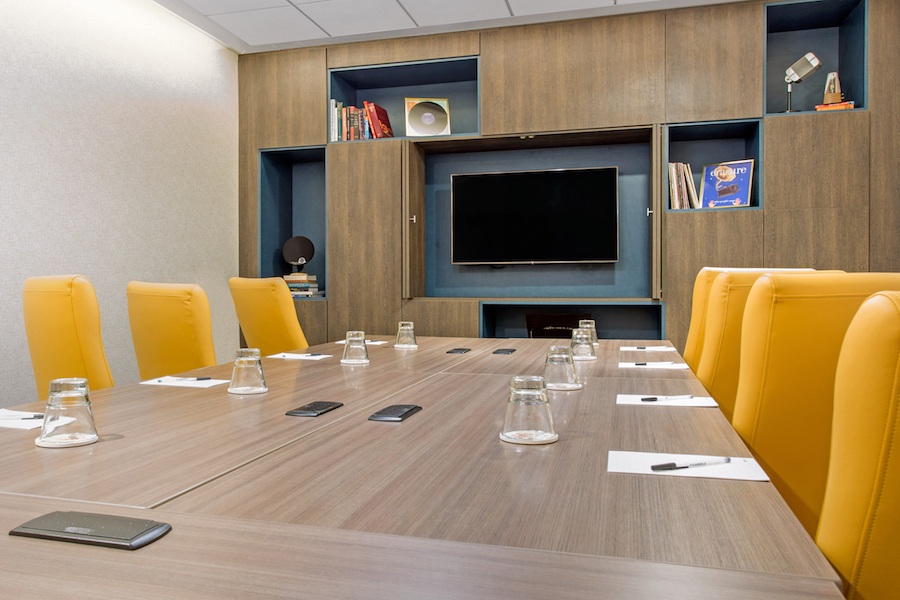 One of the meeting rooms, which are named for jazz greats associated with the city. 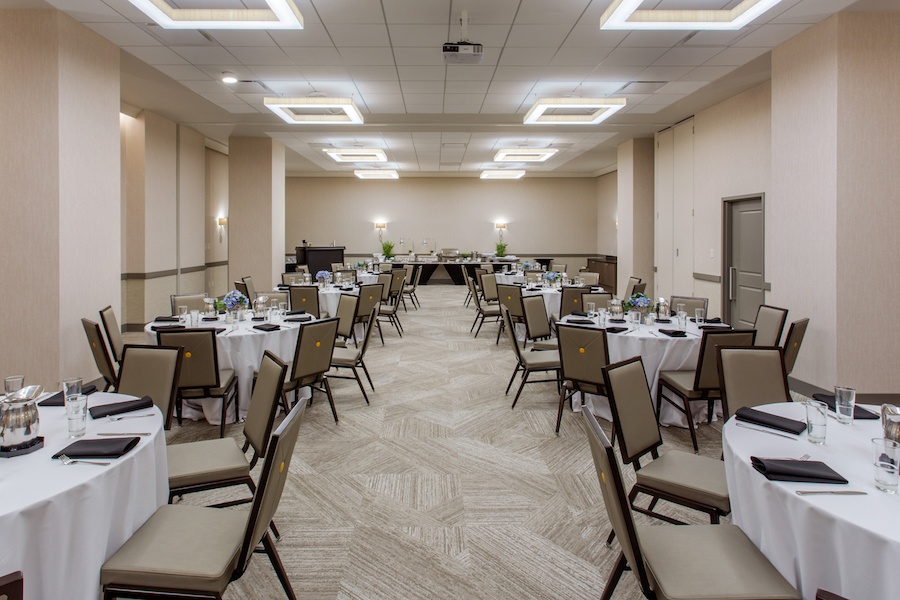 The main event and function room. The Cambria can handle small- to moderate-sized groups but is not designed to function as a convention hotel.

The fitness center carries on the bright-and-brassy theme with its yellow accent walls, and you’ll find similar pops of yellow in the meeting rooms.  But the business center, front desk and function spaces are done up in cooler or more neutral colors.

The Cambria is just one piece of a two-part total makeover building owner Pearl Properties is carrying out at the northeast corner of Broad and Locust. On the hotel’s street floor, a Del Frisco’s Grill will offer casual upscale dining starting this fall, and function-facility operator Cescaphé will open a facility called The Lucy in the two-story buildings next to the hotel.

And its linchpin is now firmly in place.