A Study in Originality on Drexel’s Campus

The new Study hotel at Drexel was created to ease the pain of touring college campuses. It also meshes with Drexel president John Fry's ambitious plan to transform both the school and its surrounding community. 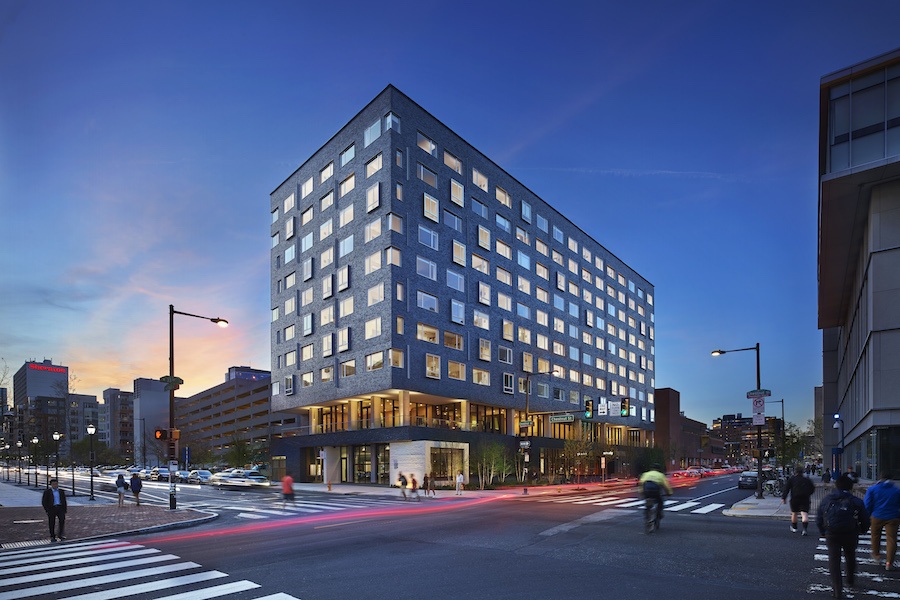 What started out with a father on a college tour, unhappy with his hotel stays, has turned into a unique hotel operation with two locations and more coming down the road. Study Hotels has been operating for 10 years now, and with two locations—first The Study at Yale, and more recently The Study at University City—and a third on the way, this operation is a whole new approach to hotel life. 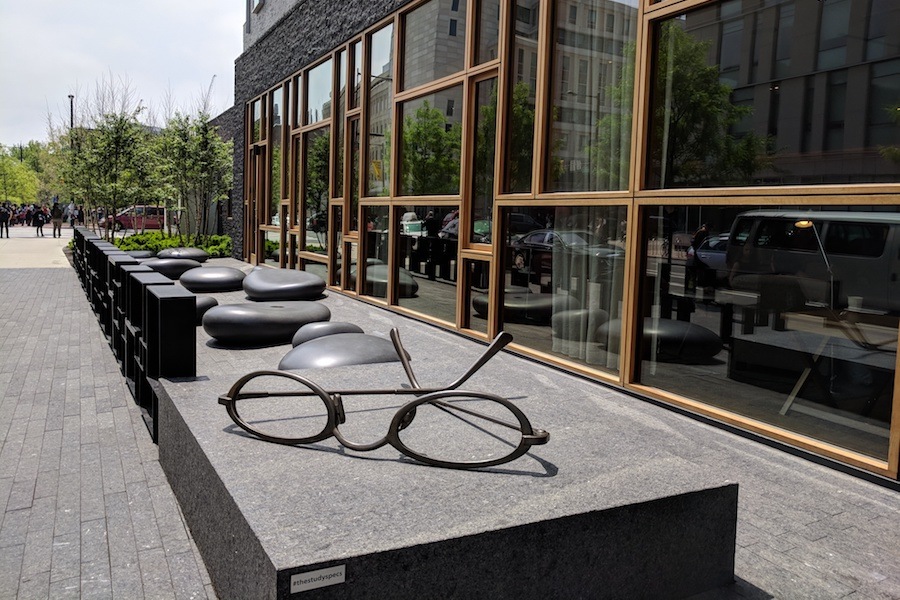 This sophisticated yet comfort-conscious hotel is marked by the iconic reading glasses sculpture in front, which, according to their mission statement, “embodies the essence of Study Hotels: intellectual, stylish, restful, yet not too serious.”

With the design of The Study, president and founder Paul McGowan wanted to answer the question, “How do we infuse what people are doing [into the hotel]?” He did this by creating a sophisticated building in the middle of Drexel and University of Pennsylvania, the heart of University City. The Study is a college touring family’s dream: spacious rooms, comfortable (not to mention very clean) beds, and a beautiful view of University City.

The rooms aren’t the only thing that make this hotel stand out. It is the connection with the surrounding community that gives The Study its edge. 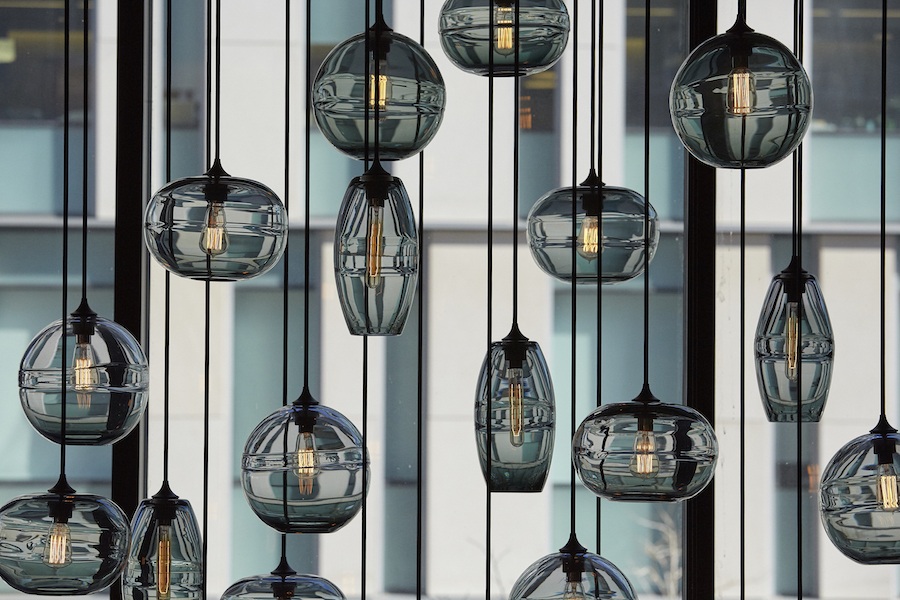 Lighting in the lobby windows from John Pomp Studios, one of the local artists commissioned to produce works for the hotel.

With architecture, lighting, and art all from Philadelphia-based artists, McGowan says, “We were thrilled to find a very talented and diverse pool of local craftspeople to interpret key elements of our design. Their work is amazing.  It’s contributed greatly to the authenticity of the property and created a meaningful connection to the local community of Philadelphia.”

The architect behind the project, DIGSAU, has produced a modern, sleek building in between two of Pennsylvania’s biggest colleges. DIGSAU believes that “architecture can allow people to uncover/discover connections between each other, place, history and time,” according to their mission statement.

Its rooms are meant to be an oasis. Director of Brand Marketing and Communications Heather Gayatgay says, “At the end of the day we want you to relax.” The rooms all have custom pieces by another Philly local, Carlo Trevisan. These paintings are cloud-themed because, as Gayatgay explained, “we want guests to feel like they are comfortable, like they are floating on a cloud.” 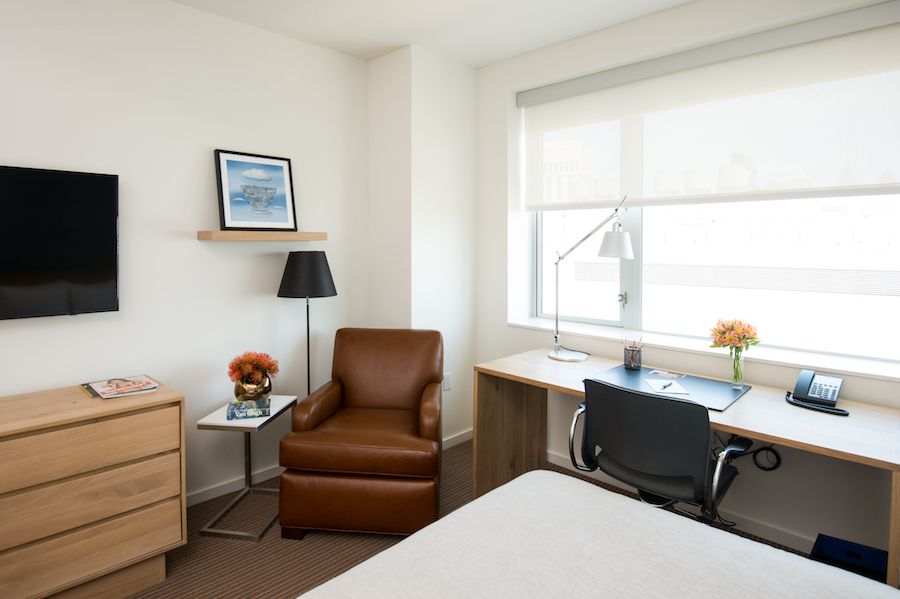 Along with the cloud-like painting, some rooms also come equipped with their very own study stocked with books from the Strand Bookstore in New York City. Every study features The Study’s signature piece: the brown leather chair. After a hard day of work or college tours, who doesn’t want to relax by the window in a warm, hug-like chair reading some of the best books?

So why was this hotel replicated over 180 miles away from Yale in University City? John Fry. Yes, that John Fry. The guy who implemented an “Agenda for Excellence” as the executive vice president of the University of Pennsylvania, transformed Franklin and Marshall as its president, and now, as the president of Drexel University, is reshaping that school’s campus and community. 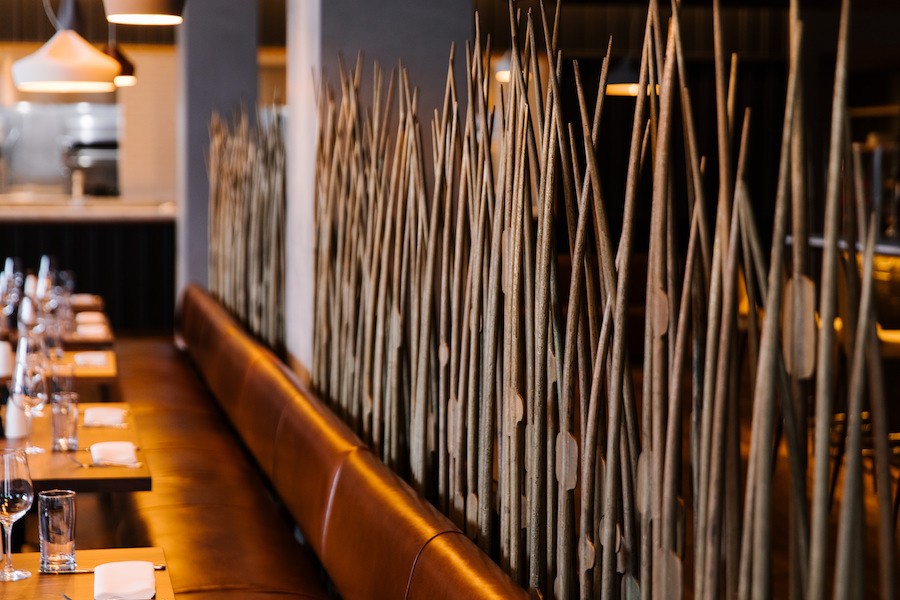 At Penn, Fry and President Judith Rodin were faced with a slew of murders of students near the campus shortly after they took office. Born out of this was a decision that something needed to change to stabilize the community. The plan they conceived for the neighborhood next to campus raised property values, reduced crime and attracted commercial infrastructure and economic development, in essence gentrifying the neighborhood. (Whether this was good or bad, I won’t get into that here.)

This plan informed the seven-year strategic plan adopted in 2012, two years after Fry took charge at Drexel. It puts forth the goal of transforming Drexel into “the Philadelphia region’s leading university excelling in high-quality experiential education, online learning, translational research, technology transfer and business incubation, and urban revitalization” — with a heavy dose of urban revitalization. On Fry’s watch, Drexel has embarked on numerous building projects aimed at both providing new amenities for its students and knitting the university more tightly into the fabric of its Powelton Village neighborhood.

The Study at University City is yet another strand in this fabric. It all started when Fry, stranded in New Haven, Conn. a few years ago, stayed at The Study at Yale. He called McGowan and asked him to build a second hotel in University City.

In a statement, Fry says, “In no time at all, The Study at University City has become an urban retreat where visitors to Drexel’s campus, members of the university community, and local residents alike gather to enjoy its welcoming spaces and warm hospitality.” 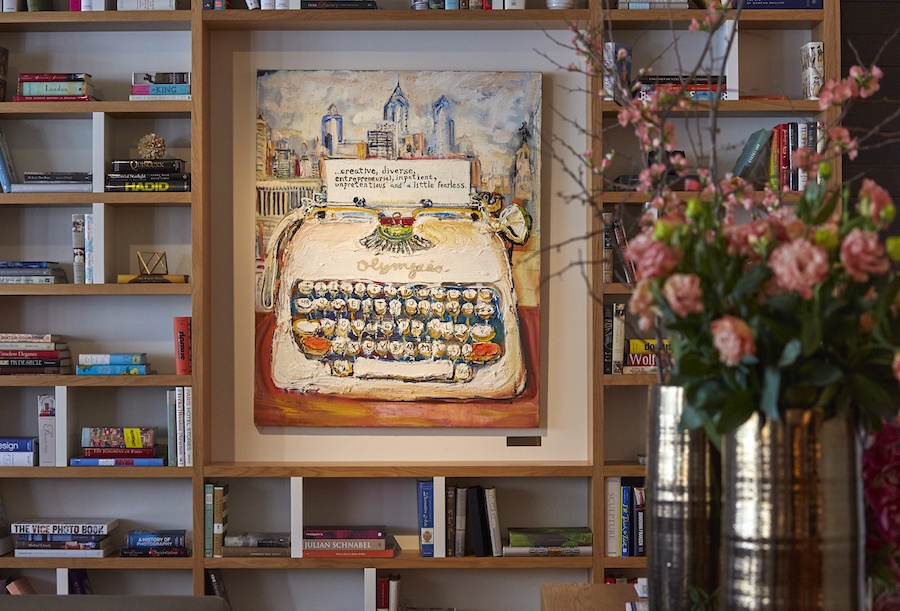 Fry sees The Study as a unifying force in University City. In fact, Fry’s words are featured in its lobby. The hotel asked Sam Messer, associate dean of Yale’s School of Art, to produce a painting showing a manual typewriter displaying Fry’s own description of Drexel as “creative, diverse, entrepreneurial, impatient, unpretentious and a little fearless.”

Updated July 30th, 2:22 p.m., to correctly identify affiliations of some of the artists mentioned in this story.