The founder and principal of Bright Common might have become a journalist had he not encountered a mechanical pencil in middle school. From that epiphany he has come to where he wants to get us ready for a carbon-free future. 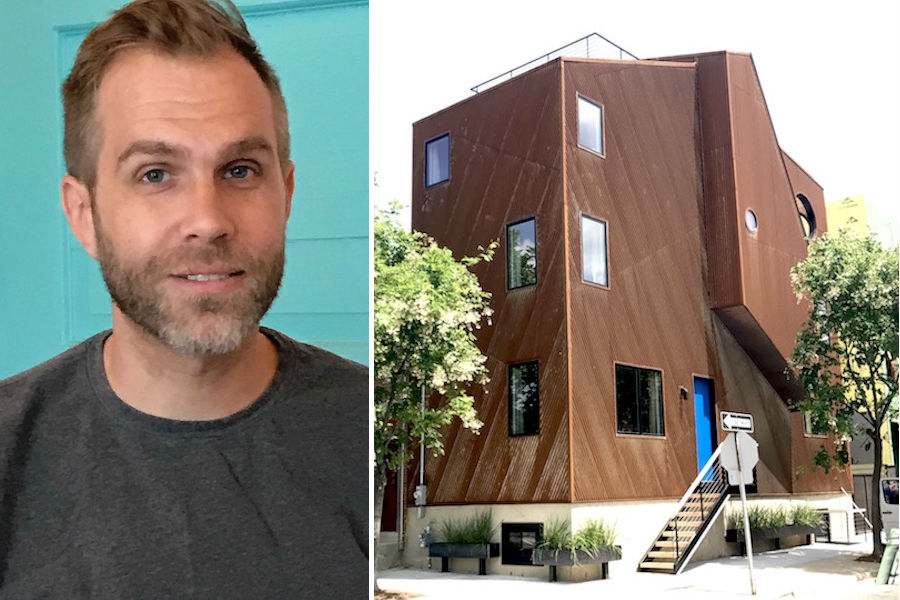 And the conversations I’m talking about here aren’t with the clients, or the contractors, or with the building inspectors, though they certainly have those. The conversations they have are with the materials they work with, the sites they build on, and the past, present and future.

And sometimes, they let reporters in on those conversations.

Avellino is one of several architects here who work at the cutting edge of building technology. His projects employ the elements and principles of carbon-neutral passive house construction to the fullest extent possible — because the planet demands it, he says.

And he might not have gotten to the point where he listens to the planet had it not been for a mechanical pencil.

With a simple pencil, the future clicked into place

Avellino discovered this device when he was a teenager in Downingtown in the late 1980s. Back then, the Downingtown schools hadn’t gone all STEM-and-college-track; like many other school districts, it still offered vocational and technical classes in things like shop and drafting. “I took a technical drafting class,” he says. “And it fascinated me. I think what fascinated me at first was that the pencil was different.”

So on the one hand, there were mechanical pencils and drafting tools and all sorts of neat gadgets that he could use to create stuff by putting ideas on paper. On the other, there was a command of the English language.

“My English teachers recognized something about my ability for creative writing, and it was enough that they went, ‘You should be a journalist.’ It wasn’t much more than that, so why architecture won, I don’t remember. These things are so random. At 18, you choose the rest of your life or something.” 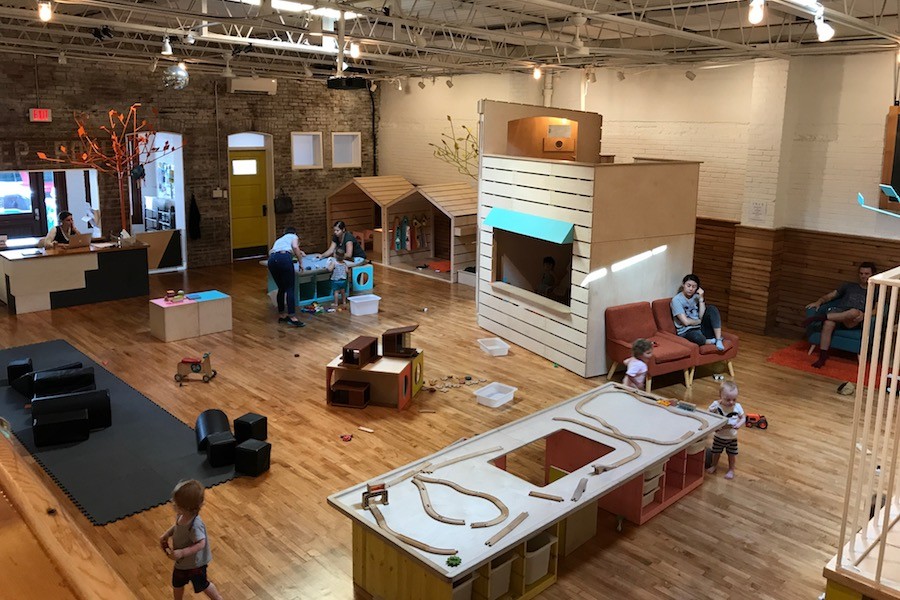 The interior of PlayArts, a daycare/learning center in Fishtown housed in a former public bath. Bright Common rebuilt this facility using passive house technology to achieve operating cost savings. The building received a Groundbreaker Award from the Delaware Valley Green Building Council in 2017.

The design-build process gets him to thinking

That choice introduced him to not only design but also building. After training to be an architect, Avellino went to work for a commercial builder of mass-customized houses. And as he learned how builders build houses, he came to the realization that they could and should be building them better.

“And it just started to sit with me that ‘Really? This is how we do it? It’s not really very good.’ It seems to be kind of harmful, it’s kind of dirty, we can kind of make it beautiful, but there just seemed to be something wrong” with conventional building and design practices.

“And so I dug deeper, and the more I learned about, I started to connect the dots between the way that as humans we were ‘civilizing’ the natural world, which I don’t really believe we’re doing. The way that we’ve been trying to improve, to make a built environment four ourselves especially in the last 2,500 years is incredibly problematic for not only ourselves but for the rest of the environment.”

Learning how we can build better

It took him a decade to reach this conclusion, but once he did, he was fortunate enough to have a friend who landed him a job with Re:Vision Architecture in Manayunk. It was at Re:Vision that Avellino first got exposed to high-performance building design and construction, and he drank it all in deeply.

Then the economy crashed, and Avellino found himself jobless. That was when he decided he could do this sort of thing on his own.

As he describes it, it was sort of a challenge to himself to see if his own ideas about how to build green really were better. “We had interesting and passionate discussions all the time” at Re:Vision, he says. “And it’s easy to tell someone else, ‘I don’t like exactly how you do it, I have different preferences.’ Well, great! How would I do it? That’s the hard question to answer.”

And he’s been coming up with answers for the last eight years. All of those answers are attempts to prepare for a future most of us aren’t ready to accept yet.

Preparing for a future we’re not ready for

“The last eight years have been this exploration into behaving in a way, with a belief that a post-carbon future is possible. We’re not there yet. I don’t know if it’s probable, but I believe it’s possible. And I know that it’s necessary, right? And so I’m trying to set up a business, and we’re doing it in a way where it kind of falls into place. We’ll be ready, we’ll just be cooking with gas. Actually, not gas. We will be cooking on induction cooktops.”

So if Jeremy Avellino has anything to do with it, the future will be super-airtight, very well insulated and really, really cheap to run and maintain, even if it costs a little more to build up front. (Like every other architect and builder in the high-performance arena, Avellino points out that those higher construction costs are recouped in the form of dramatically lower energy bills.) But what will that future look like?

Whatever it looks like, it will arise organically from its site and context if Avellino has his way. And it will be the product of several conversations. But clients who engage him might want to know something about his notions of context and site.

Ideas from multiple sources, including the site 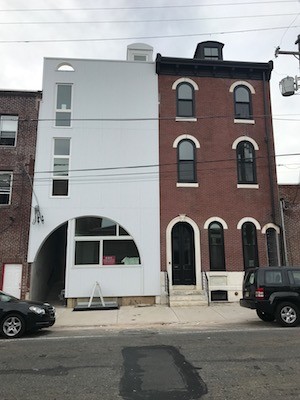 Kensington Yards in South Kensington fused a rebuilt mid-19th-century townhouse with a new structure to create a multi-unit condo development where each home has a distinct layout.

“Context matters,” he says. “[But] if you’re like, ‘Oh, no, we have to build the thing next to the old thing, it has to look exactly like it’ — I don’t believe that. And if someone believes that wholeheartedly and that’s their thing, right on, man. I [just] have some different ideas.”

And those ideas come from various sources. Avellino came of age during the years when deconstructionism was big, and he says that his current philosophy is a reaction against it. It draws on architects as disparate as the ur-postmodernist, Robert Venturi — a person whose work he hated, he says, until he took a good, hard look at Guild House one day and it suddenly made sense — and Brutalists such as Paul Rudolph: “I think Brutalism’s a midlife crisis of modernity,” he says.

The sort of buildings he wants to design now are what he calls “site-generated.” If you don’t quite understand what this means, go look at a Frank Lloyd Wright house: the master’s homes draw their form and massing from the landscape and terrain that surrounds them. And if what surrounds them is other buildings, then Avellino’s will respond to their surroundings too.

Avellino is looking forward to designing and building homes in line with the 2018 International Building Code, which Philadelphia got special permission from the state to adopt. This code incorporates the technological and design advances brought on by the green building and passive house movements. The large mass-custom builders will have a steep learning curve to climb, he says, but boutique builders like Red Oak Development and firms like Onion Flats are already there. But. he says, “that’s not that many people. That’s not enough.” The challenge, he says, will be getting the Toll Brothers and Ryan Homes of this world on board. And that means tossing out the standard homebuilder pattern books and developing new ones.

Avellino actually has no problem with the business model of the mass customizers: “I actually think that system, financially and conceptually, works okay, if it didn’t end up [producing] terrible McMansions.” Adapting the system to produce better built and more sustainable homes, he says, will take some effort, but it will be worth it in the long run, and he’s willing to help rewrite those pattern books.

Besides, it’s what the planet wants builders to do. At least that’s his takeaway from the conversation he’s been having with it.