House values, median household income and college attainment all shot up dramatically since 2000 in zip codes 19123 and 19146, according to a RentCafe study. 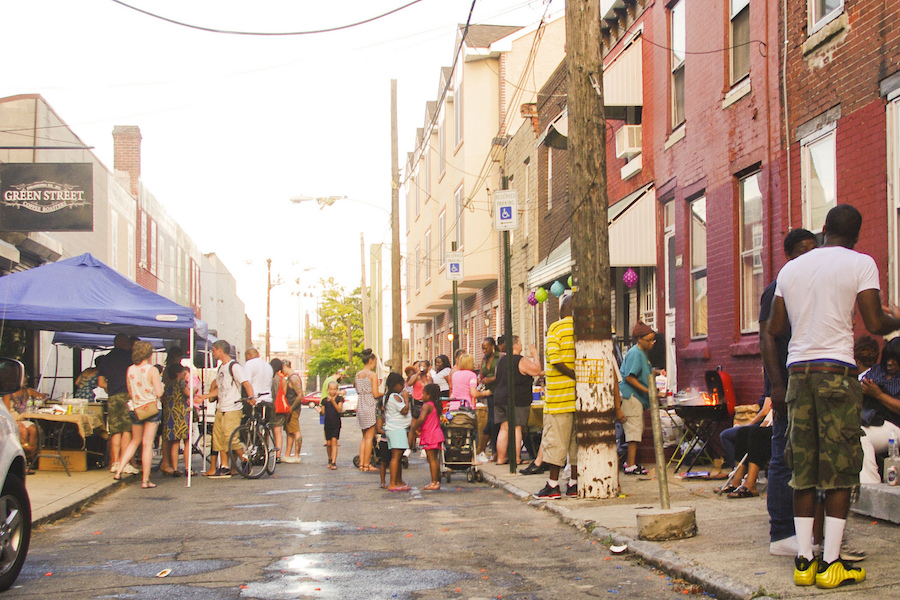 Old and new Point Breeze come together at this 2013 fundraising block party Green Street Coffee Roasters held in support of the Fresh Artists program. The neighborhood’s zip code made it onto RentCafé’s list of the 20 most gentrified in the country. | Photo: Flickr user dubofadubofadub, licensed under CC-BY-NC-2.0

Have you noticed your neighbors munching on avocado toast more at Sunday brunch?

Come to think of it, have you noticed them having big Sunday brunches instead of Sunday dinners?

If you have, chances are you’re living in a gentrifying neighborhood. And if you happen to live in zip codes 19123 or 19146, you might want to pay really close attention to what your neighbors are doing, for your zip codes are among the ten most gentrified in the country.

This information comes courtesy of the apartment information site RentCafé, which has just released a study listing the 20 most gentrified zip codes in the country over the years since 2000.

Zip code 19123, which conforms almost exactly to the Northern Liberties neighborhood, placed fourth on RentCafé’s list. Four places behind it, at No. 8, is 19146, which contains all of Graduate Hospital and most of Point Breeze.

RentCafé determined its rankings by taking 2000 Census and 2016 American Community Survey data on median house prices, median household income and educational attainment — specifically, the percentage of residents with bachelor’s or higher degrees. It then ranked each of 11,000 zip codes on each of these factors and averaged the three to get the final ranking.

Median house values rose the most in 19146, which ranked fourth nationwide on that metric. Prices there shot up an astonishing 404 percent over the 16-year period. The rise in 19123 was a less breathtaking 203 percent.

NoLibs outscored G-Ho/Point Breeze on the other two metrics. NoLibs residents are far more educated now than they were in 2000, with the percentage of degree-holders jumping 230 percent. In 19146, the figure was less than half that: 106 percent. Neither figure was high enough to land in the top ten in this category.

One neighborhood screams, the other doesn’t

So why are people in Point Breeze up in arms about gentrification while Northern Liberties residents seem blasé by comparison?

Philly belongs to an even smaller club

In a national context, only the New York City borough of Brooklyn had more zip codes place in RentCafé’s top ten than Philadelphia. Los Angeles, Washington, Houston, Manhattan and Fort Worth had one each. The single most gentrified zip code in the United States was LA’s 90014, followed by 20001 in Washington and 77003 in Houston.

Of the top 20 most gentrified zip codes, Brooklyn accounts for seven. Manhattan, Los Angeles, Houston and Washington join Philadelphia in having two, and St. Louis, Austin, Baltimore and Tacoma, Wash., have one each.

Other factors may also contribute

“Gentrification happens when these three factors, and maybe more, take place simultaneously: an increase in home value, an increase in household income, and an increase in the share of highly educated residents,” said RentCafé spokesperson Andra Hopulele. “This is why even relatively affordable markets, like Philadelphia, can be affected by gentrification. Also, the extent to which gentrification can be disruptive depends on regional policies and also on how fast it occurs.”

Hopulele added that the sharp rise in the city’s Millennial population may also have influenced the way gentrification has occurred here as well as the response to it. Noting that jobs, accessibility, and personal tastes all play a role in determining whether or not a neighborhood will gentrify, she continued, “I would not dismiss the Millennials’ needs and expectations.”

What does all this mean for Philadelphia going forward? It will certainly shape the ongoing debate over housing affordability and the supply of affordable housing. It will certainly spur additional efforts to ensure that neighborhoods facing gentrification nonetheless have an adequate supply of housing within reach of lower- to moderate-income households. But whatever happens, what should not result from this is moves that make it harder to build new housing at any price range.