They may be rivals in the marketplace, but several of the city's best-known developers are chipping in together on the $7 million makeover of the nation's first Holocaust monument - a project that hits some of them close to home. 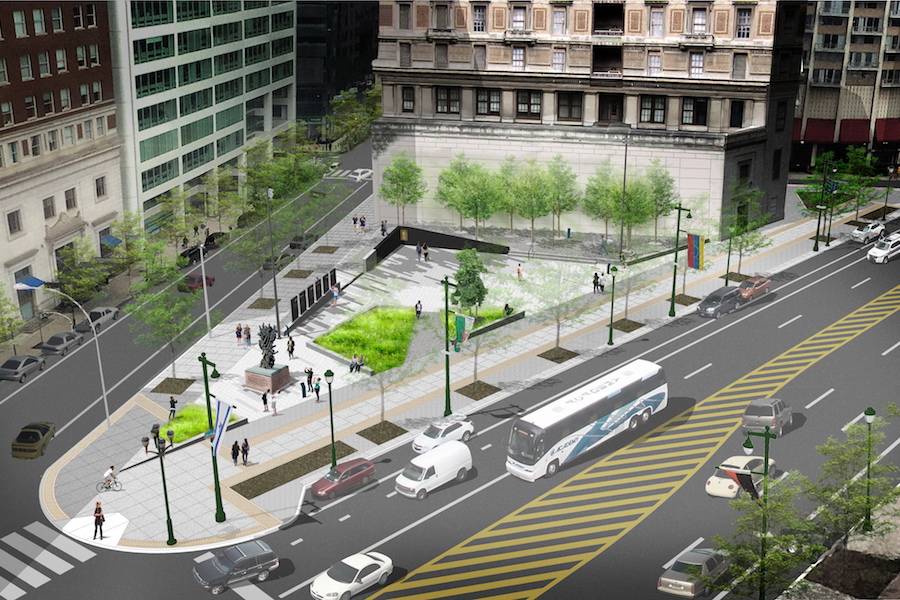 An overview of the new Holocaust memorial now under construction at the entrance to the Ben Franklin Parkway. | Rendering: WRT

The expanded Holocaust Memorial now under construction on the Ben Franklin Parkway represents not only a reimagination of the oldest Holocaust memorial in the United States but also a coming together of some of the biggest names in the city’s real estate and development community around a matter that has touched some of them personally.

“In some cases we’re competitors. In all cases we’re friends. In this case, all of us are united by our philanthropic mission,” said David Adelman, CEO of Campus Apartments and chair of the Philadelphia Holocaust Remembrance Foundation (PHRF) board.

Adelman, who has served as PHRF chair since early 2016, had been involved in the project to renew and expand the city’s Holocaust memorial before. He joined the board in 2005, when discussions on the memorial sculpture’s future first began, and served on it until 2009.

“A place for contemplation and reflection”

“We had a vision for a grand project that would house a building,” he said this past fall about the early version of the expansion project. “After the economic downturn, we realized that wasn’t what we need. We need a place for contemplation and reflection. What with the rhetoric around Charlottesville and all that, we need this now more than ever.”

The new memorial will serve not only as a tribute to the six million Jews who perished at the hands of the Nazis in Germany but also as a reminder of the values that serve to keep totalitarianism and hatred at bay. The original 1967 sculpture in remembrance of the six million will remain on the site, but it will be surrounded by several new elements.

A black granite Wall of Remembrance will define a contemplative space for meditation and reflection, shaded by a grove of trees on its west side that pay tribute to the woods that sheltered those who resisted the Nazi regime. Embedded in the wall will be an eternal flame, a reminder that we should never forget either the atrocities or our capacity for evil.

Along the Arch Street side of the site will stand six paired pillars representing the values that produced a genocidal totalitarian regime and the democratic values that allow us to resist the totalitarian temptation. A sapling of the tree planted by the children of the Theresienstadt concentration camp will also be planted on the site so that it will mature as the original has, and rails from the tracks that led to the death camp at Treblinka will be embedded in the memorial plaza’s pavement.

“We think that with the flame, the railroad tracks and the forest, it will be visually stimulating for people,” Adelman said. But if all that isn’t enough, an interactive smartphone app will engage visitors with the issues the Holocaust raises.

The real estate community gets on board

Adelman is spearheading the campaign to raise the $7 million needed to complete the transformation project, work on which commenced with a ceremonial groundbreaking on Nov. 28th. As of now, Adelman said, about 65 percent of the total has been raised from public sources and private donations, enough for construction to proceed.

“I’d been aware of the Holocaust memorial park as long as I’ve lived in Philadelphia,” said Pestronk, “but I wasn’t more than peripherally aware there was a movement to restore the memorial until about three years ago, when JFRE, whose board I served on, was approached by Steve Kessler, who was the chairman of the PHRF.” (Kessler is now the foundation’s treasurer.) “He basically said that he felt their efforts needed a boost of energy from younger people and some real estate expertise and asked us to help. David Adelman, who I know, volunteered us for the job.”

The extra energy did the trick, moving the project back out of neutral. The PHRF was able to obtain a ground lease from the City of Philadelphia for the entire triangle of land at the Parkway’s tip, and it secured the services of the Center City District in finding the right architect for the job and managing the construction. That landscape architect, by the way, was WRT.

Adelman noted that while the memorial specifically commemorates the Jewish Holocaust, “it’s a nondenominational space, because it’s not just Jews — there are genocides all over the world. It’s a place of remembrance, a place of contemplation, and a place where we can consider how we make things different in society.”

The Holocaust hits close to home for some

The reconstruction project has special significance for several developers because for them, the Holocaust is personal.

“A large number of my mother’s extended family died in the Holocaust,” said Pestronk. While his mother’s grandmother emigrated to America in 1911, most of her brothers and sisters, about 14 in all, remained behind in the rural shtetls of Central Europe, working at subsistence jobs until they were rounded up. “Two survived. One made it to the United States, and one to Canada, as far as we know.

“And a second cousin twice removed went back — he had joined the Polish army, made it to the U.S., then wound up in Cologne, Germany.”

Adelman told a similar tale. “What got me involved then and now is my grandfather, who was in one of the concentration camps, Sobibor. He was one day from being thrown into the ovens, but he escaped and joined the freedom fighters. I want my family to understand what a great man he was and what he fought for.”

“Doing something to honor my personal connection to the Holocaust is immensely satisfying as well as taking something that was troubled and putting it on the path to success,” Pestronk said. “And, of course, there’s also the ability for us to have a lasting and relevant memorial with a lot of digital content that will educate future generations about what happened and keep them vigilant about something like this never happening again.” 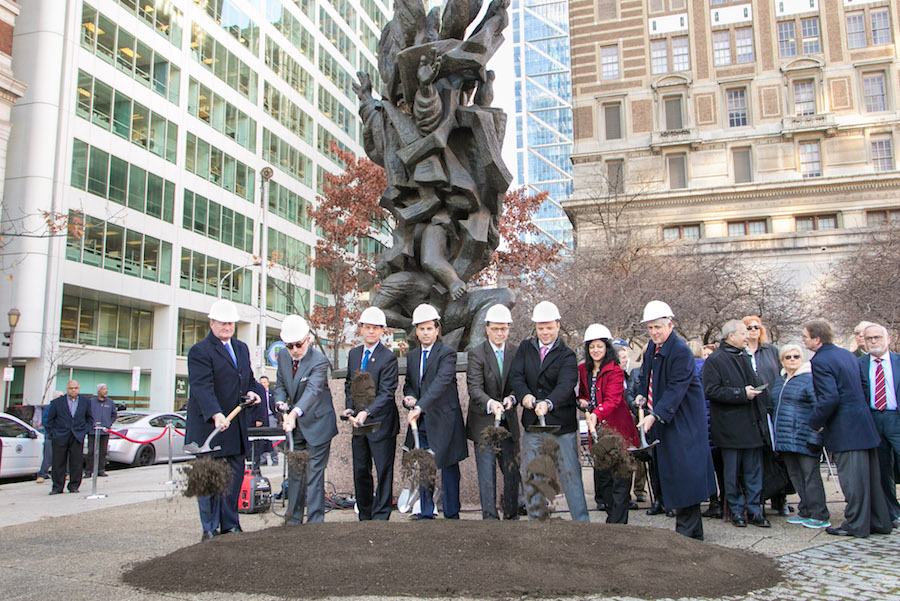 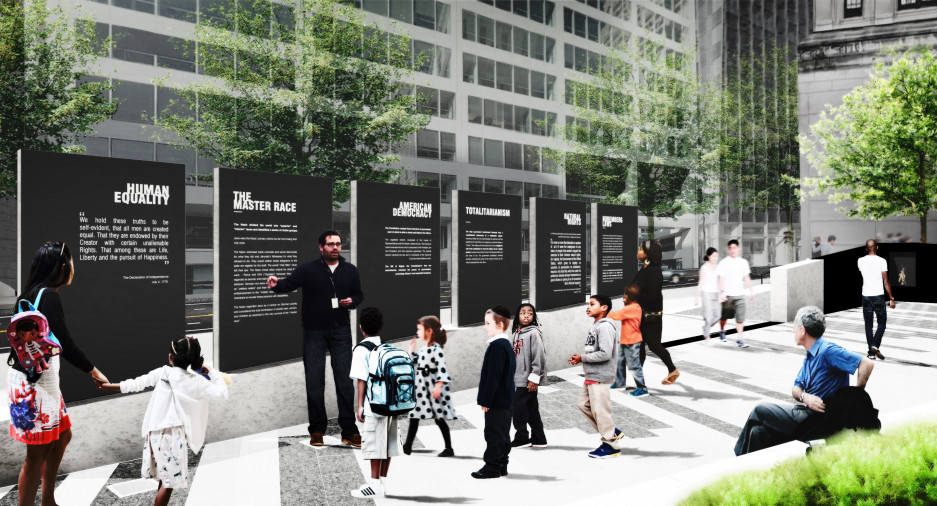 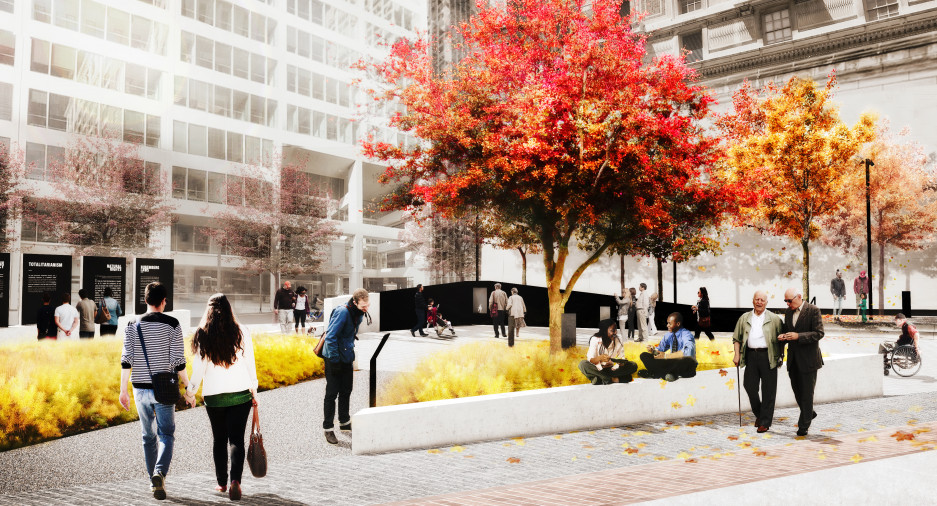 A sapling from the Theresienstadt Tree will be planted at the tip of the triangle. 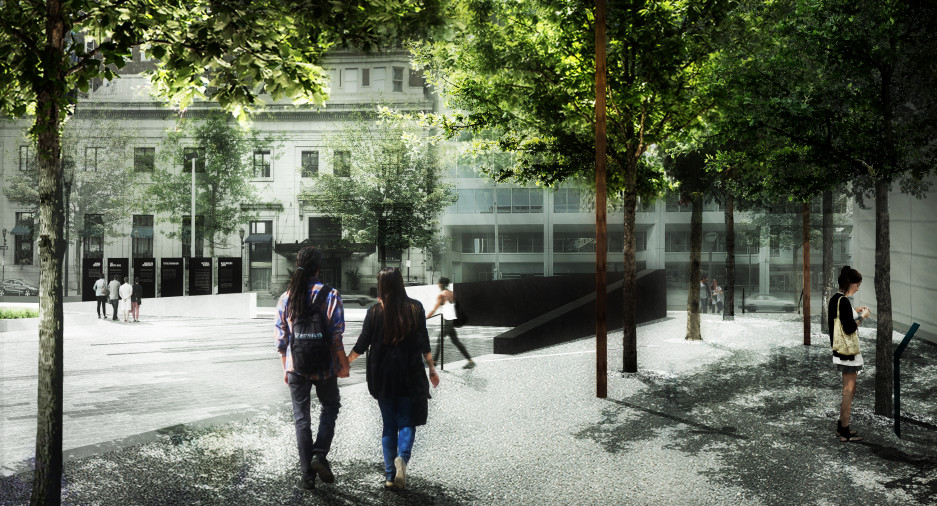 A view of the memorial from its north side.

Updated Dec. 13, 10:01 a.m., to correct Matt Pestronk’s position title and his role on the board of JFRE, the terms of the ground lease and the nature of the interactive digital content at the memorial.