Why This Year’s DesignPhiladelphia Festival Is The Largest Yet

This year's 13th edition of the celebration of all things design goes deep into the neighborhoods and gets personal with the makers. 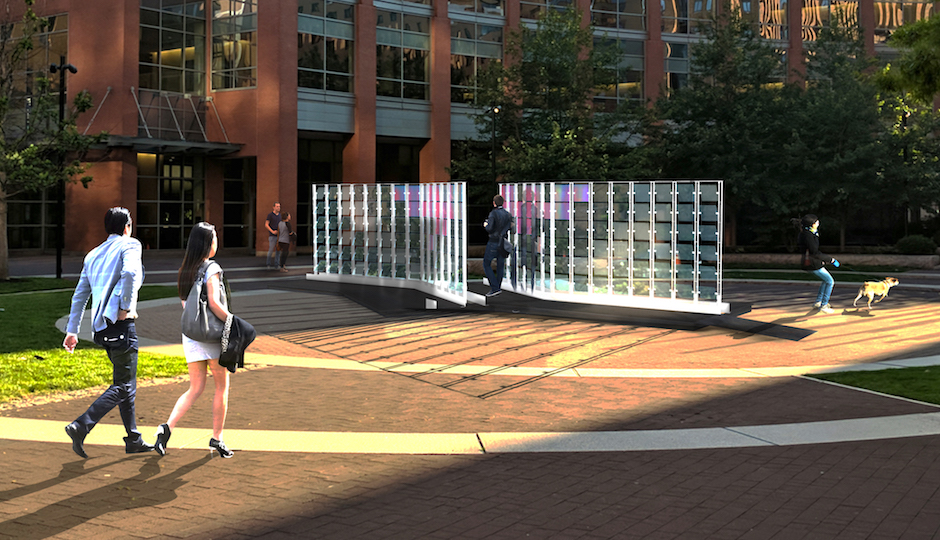 “Merge,” a collaborative project by students at Jefferson University and the Finishing Trades Institute, is one of the featured works on display throughout this year’s DesignPhiladelphia festival. | Rendering: Architectural Glass Institute via Center for Architecture and Design

The organizers of the oldest design festival of its kind in the country this year decided to go deep rather than broad. And as a result, this year’s DesignPhiladelphia festival offers participants a chance to see Philadelphia’s design community at work like never before.

The 2017 edition of DesignPhiladelphia showcases the work and passions of thousands of local designers, architects, and creative professionals through more than 130 events that include exhibits, workshops, tours, open houses, pop-up shops and more — the most events in the festival’s 13-year history.

One of the most significant changes in this year’s festival is the way many of the events are scheduled. Instead of having studios around the city host events across several nights, the festival features a series of “design crawls” where architectural firms, design galleries, studios and workshops throw their doors open to visitors all on the same evening, much like the popular First Friday gallery crawls in Old City. In fact, the first of these crawls, on Friday, Oct. 6th, is this month’s First Friday in Old City. On Monday, Oct. 9, studios, offices, showrooms and galleries in Center City (roughly 12th to 20th streets from Vine to Spruce) open their doors. West Philadelphia’s design community welcomes guests on Wednesday, Oct. 11, followed by an evening in Fairmount and Brewerytown on Thursday, Oct. 12th. The series ends with a Fishtown and Kensington Design Crawl on Friday, Oct. 13th.

“We were able to partner with neighborhood organizations and businesses” to set up the open-house tours, said Rebecca Johnson, executive director of the Center for Architecture and Design, which organizes the annual festival. “We were responding to folks who were saying, ‘It’s nine days with over 100 events. Make it easier for us to see events in one part of the city in one evening.”

The design crawls also made it easier for businesses and professionals large and small to become part of the festival. By offering designers the option of simply holding a one-night open house, the center lowered the financial bar to participation for many firms and organizations that wanted to participate but found the cost involved too high.

Another features pieces created by eight individuals and teams of local furniture designers Bok Bar commissioned to produce bespoke furniture for the South Philly rooftop hotspot. The designers involved in the project will gather at Bok Bar on Friday, Oct. 13th, to discuss the creative processes that led to these one-of-a-kind works.

There’s also a “scavenger hunt” that highlights both creativity and continuity in furniture design. “The Art of Making Everything,” sponsored by Collab at the Philadelphia Museum of Art, features the work of local designer/maker Tyler Hays, founder of BDDW, the Philadelphia atelier whose furniture and decorative objects have become the talk of New York and Milan. Hays will talk about his career and design philosophy at the event; after the talk, attendees will go off in search of works by Hays that have been scattered throughout the PMA’s 17th- and 18th-century decorative arts galleries.

Johnson noted that Hayes and BDDW also exemplify the ways in which the design industries power the local economy. “Tyler is interesting from a design perspective for sure,” she said, but “the way Tyler has built his companies has been good for the city from an economic development perspective and a design perspective. One thing we also do with this festival is highlight Philadelphia as a design city.”

The growth of the festival mirrors the growth of the city’s design community since its founding in 2005. “DesignPhiladelphia has continued to grow in quantity and quality each year, which speaks volumes about the depth of design talent in the region,” Johnson said in a news release. “Our goal is to highlight the best designers in Philadelphia, as well as introduce new, cutting-edge designers to the public.”

The festival gets under way tomorrow (Wednesday, Oct. 4th) with the opening of a special exhibition and the “Merge” installation at Jefferson’s Center City medical campus and a kickoff party in Jefferson’s Dorrance Hamilton Hall. Many festival events are free, and all are open to the public. For more information, a complete calendar of events, and to purchase tickets for the kickoff party and other events, visit the DesignPhiladelphia website.