A recent investigation reveals city efforts to crack down on developers with outstanding code violations has let lots of them slip through the cracks. 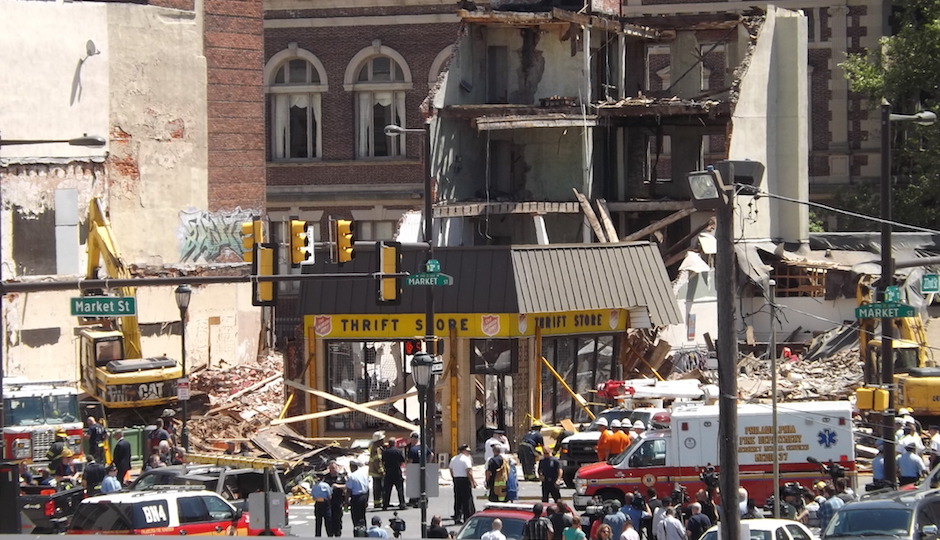 The collapse of a building being demolished in 2013 that destroyed a Salvation Army thrift store triggered stepped-up city efforts to crack down on rogue developers. Those efforts have been less than effective, a new investigation reveals. | Photo: Sandy Smith via PhillyLiving.com, 2013

If you want to acquire city-owned land for your development, you should have all your permitting, licensing and tax-compliance ducks in a row.

At least, that’s how things are supposed to work. But the reality is different.

Instead, city efforts to catch development scofflaws have used a net that’s as full of holes as Swiss cheese — holes big enough for rogue builders to swim right through.

That’s the main finding of a feature that appears on City & State Pennsylvania today. Reporter Ryan Briggs presents evidence of developers with outstanding tax bills and serious code violations continuing to acquire land from the city despite efforts to keep this from happening.

The trouble, it appears, is with the city’s own methods for tracking down violators. For instance, city searches for violations usually don’t turn up violations attached to limited liability companies (LLCs) developers form to acquire specific properties, a common real estate industry practice. Thus a developer may submit a request to purchase city-owned land using an entity with a clean record and not get nailed for the violations attached to another LLC.

Briggs’ report lays the blame for that on a long-delayed city program to improve its ability to cross-reference companies on the basis of things like common mailing addresses. But even developers who have easily traceable violations in their own name or that of a previous applicant manage to slip through the cracks.

But even developers who have easily traceable violations in their own name or that of a previous applicant manage to slip through the cracks. One developer who was contacted by the city about an outstanding violation after City & State started its investigation said that the agency ultimately did its due diligence and that he had cleared the violation. But he went on to say that the contact might not have occurred were it not for the investigative project: “The whole process seemed a little backwards.”