A total of $6.5 billion in public and private investment will turn the station area into a multimodal transportation hub and add new office, retail and residential space. The Porch gets a huge upgrade too. A renedering of what the area around 30th Street Station would look like when all the projects envisioned in the development plan are completed. | Renderings by Skidmore, Owings & Merrill, courtesy Amtrak

This morning, Amtrak, SEPTA and Drexel University officials unveiled plans for a massive transformation of the area around 30th Street Station.

The massive, multi-decade 30th Street Station District Plan would, when completed, turn the area around 30th Street Station into a second downtown for Philadelphia focused on the second-busiest station in the Amtrak system. That station, transformed into a multimodal transportation hub for the region, would serve as the linchpin of the planned development.

New office, retail and residential buildings containing 18 million square feet of total space and 40 acres of open space would be created under the plan, with most of the development privately financed. A total of $2 billion in public investment would leverage an additional $4.5 billion in private investment. These figures are on top of the $3.5 billion Drexel University and Brandywine Realty Trust have already pledged to see the Schuylkill Yards development, which Drexel President John Fry described as “a down payment” on the plan at this morning’s public unveiling, to completion.

Tony Coscia, chairman of Amtrak’s board of directors, said the development would capitalize on the mobility the transportation hub provides.The development’s backers estimate that 20 to 25 million passengers would pass through an expanded 30th Street Station annually.

In addition to serving as the main Amtrak intercity rail station for the region, 30th Street Station would also become the main intercity bus terminal via a new facility to be connected to the station’s north side. Building it will require relocating the ramps connecting Interstates 76 and 676 to the station, a process PennDOT Office of Penn Ports Director Jennie Granger said is just entering the feasibility-study phase.

Further along is preliminary engineering on a new underground concourse that would reconnect the SEPTA subway station at 30th Street to the Amtrak station. Representatives of community groups involved in shaping the plan identified rebuilding an all-weather connection between the stations as a top priority item. SEPTA General Manager Jeff Knueppel said the project is “focused on the economic development of the region.”

In addition to the bus facility, Amtrak also plans to expand The Porch at 30th Street Station into a new gateway park that would envelop the facility, offering a tree-lined promenade along the Schuylkill, a west-side plaza that could be used for large-scale events and a north plaza that would activate Arch Street.

Most of the private development beyond that announced as part of the Schuylkill Yards project would be built on a platform extending over the existing Powelton Yard and the tracks leading into 30th Street Station from the north. Local streets would be extended through the territory.

The project as outlined would be the single largest development project in the Commonwealth and turn West Philadelphia into a regional economic hub. Amtrak Executive Vice President for Northeast Corridor Business Development Steven Gardner said the project would create 22,000 construction jobs and another 10,000 permanent jobs and add 8,000 to 10,000 residents to the city’s population.

“This project, and I hate to use this word, trumps anything else now under way or proposed in the city,” said State Sen. Vincent Hughes.

The impetus for the project, Granger said, began when Fry contacted Amtrak about the possibility or developing the area over Powelton Yards. The plan outlined this morning is the result of two years of consultation and discussions involving Drexel, Amtrak, Brandywine Realty Trust, SEPTA, PennDOT, local elected officials and representatives of the roughly one dozen community and civic associations in the area surrounding the project site.

This morning’s event was designed to build momentum for securing the necessary financing. “This has to start now. We can’t wait for 35 years,” Councilwoman Jannie Blackwell said in a promotional film Amtrak produced to showcase the development’s transformative potential. “Working together, we’re going to make this happen,” Granger said.

The renderings below, produced by Amtrak’s project architect, Skidmore, Owings & Merrill, are conceptual and may not reflect what the buildings and spaces will look like when actually built.

(How likely is all of this to come about? We’ve posted our odds here.)

A Vision for the 30th Street Station Area 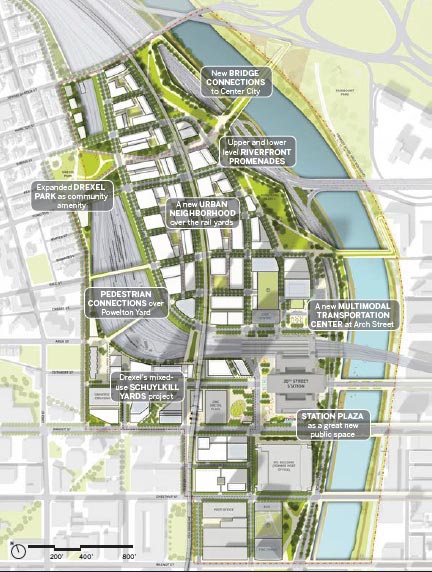 A site map of the proposed development at buildout. 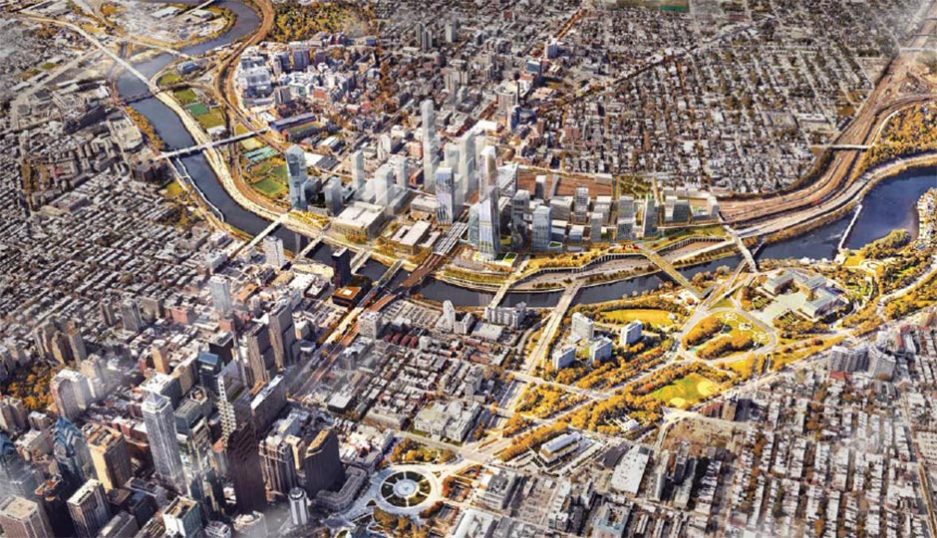 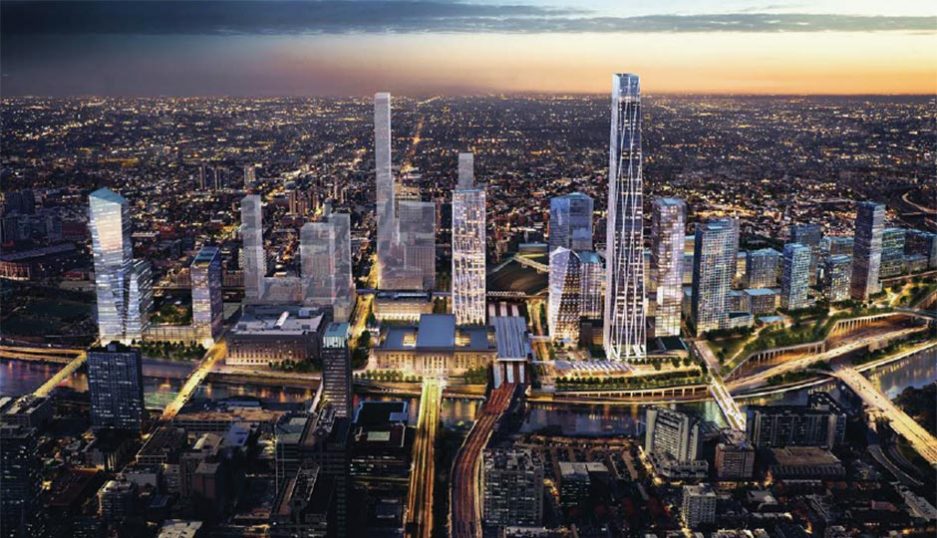 A view of the project from the east. 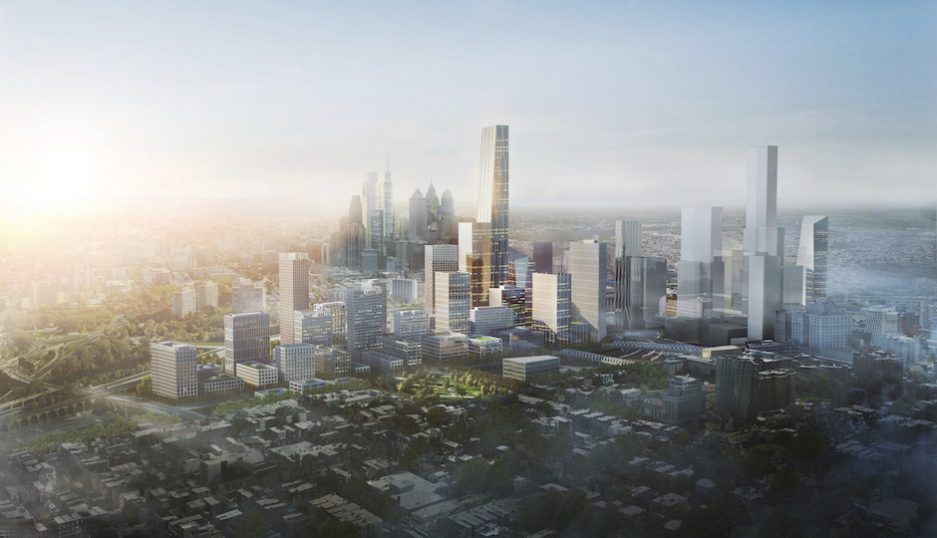 A view of the project from Powelton Village. 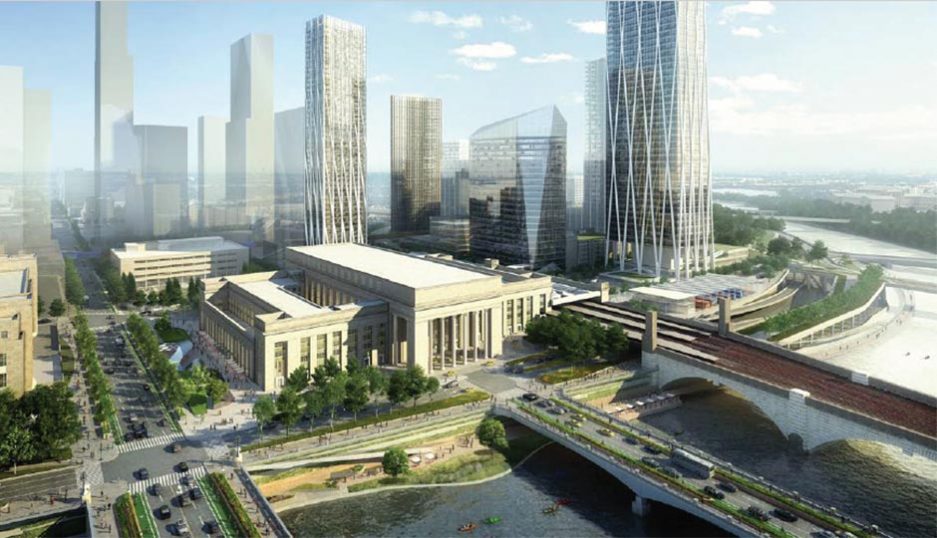 A view of the station plazas from the east. 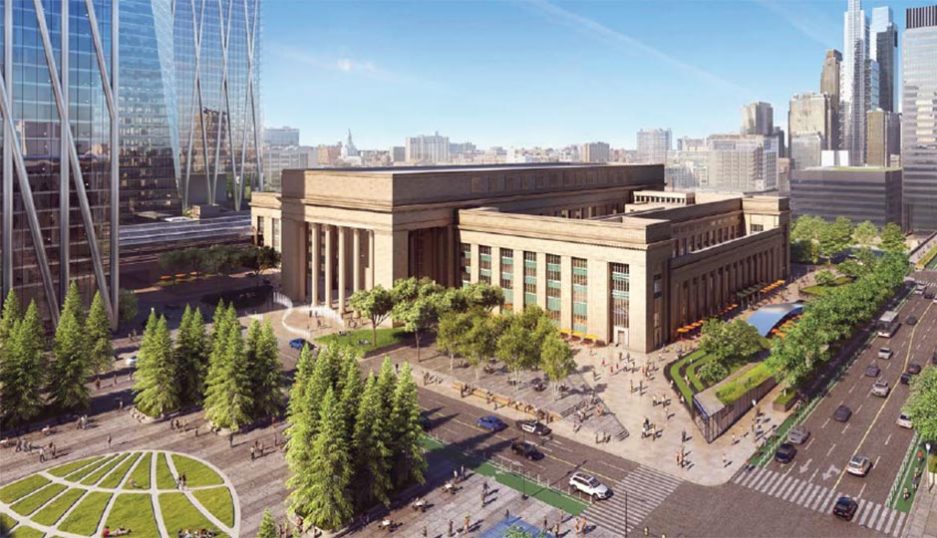 A view of the station plazas from the west.

A view of the station plaza from the west side. 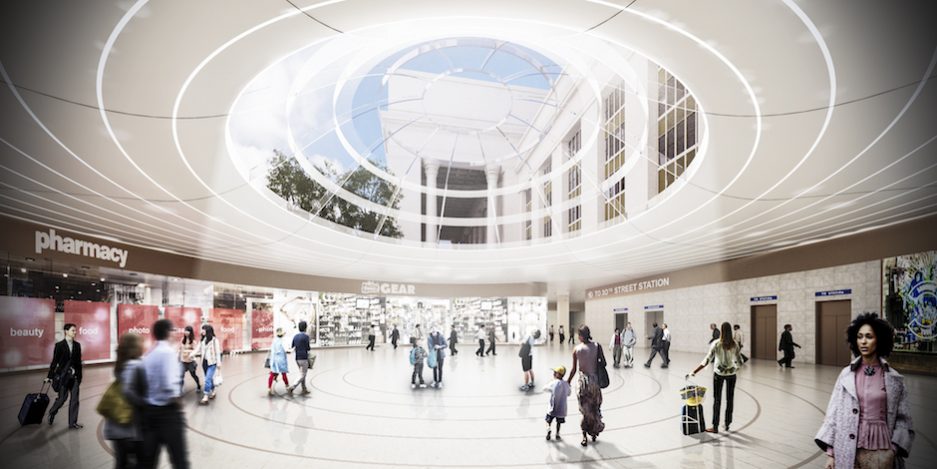 The underground concourse connecting the subway and train stations.