Presidential City Gets Its Own Resort

This is definitely no longer your garden-variety 1950s towers-in-the-park apartment development. The Sora Pool Club. The Olympic-size lap pool is in the foreground, and the clubhouse is in the back. | Photo: Sandy Smith

Matt and Mike Pestronk, the brains behind Post Brothers Apartments, have a flair for in-your-face public relations, as those who recall the campaign they waged against construction-trades union members who picketed their Goldtex apartment conversion in Callowhill may recall.

They’re also experts at selling sizzle — but they also offer the steak to go with the sizzle.

Post Brothers formally took the wraps off the latest proof of their expertise last night (May 11) at the Presidential City apartment complex on the Philadelphia side of City Avenue in Wynnefield Heights.

The unions haven’t sent out protesters to disrupt the ongoing conversion of this 1950s City Avenue landmark into up-to-the-minute apartments; they’d probably never get past the gates. But they did put up lawn signs last summer reading “DO NOT RENT HERE” along City Avenue. The Pestronks responded with signs reading, “YOU’LL NEVER WANT TO LEAVE.”

With the addition of the Sora Pool Club to the complex’s amenities, that riposte becomes truer than ever.

The Sora Pool Club turns this development into the first in the city to have its own on-site resort, giving new meaning to the term “staycation.”

Below the roof deck is a fitness center with all the latest exercise equipment and a spa. Residents can enroll in free fitness classes,workshops and personal training sessions or schedule treatments in the spa. The clubhouse also contains sauna facilities and tanning capsules for men and women as well as a co-ed steam room. A juice bar will open in the clubhouse later this summer.

Post Brothers CEO and co-founder Mike Pestronk explained that the club, which replaces a smaller pool and clubhouse on the property, is designed to be a relaxing environment. The architecture and design of the outdoor spaces displays a strong East Asian influence, from the arbors over the lounges and kitchens to the design of the pools, where water falls over the edges for a very Zen-like effect. Several of the tables in the kitchen seating area are made from solid tree trunks as well.

“Given the unique layout and sheer size of the Presidential City complex, there’s an experience here that simply cannot be duplicated anywhere in Philadelphia,” Pestronk said in a news release.

Last night’s opening party drew a mix of complex residents, neighbors and notables from across the city as well as Post Brothers executives and staff. The pictures below give you an idea of what sort of resort Presidential City residents will now enjoy.

Meanwhile, work continues apace on the upgrading of the four apartment towers. The Madison, the second tower to be completed, reopened for occupancy this spring; While the apartments are finished, the tower’s restaurant space is still being remade, but Pestronk said that Panera Bread has signed a lease for some of the space and that negotiations with a sushi restaurant are under way. The remaining two towers have been gutted and are currently being rebuilt to match the standard set by the Washington and the Madison.

And those lawn signs? They’re gone. But it’s quite likely that with a first-class resort on site, it will be that much harder for would-be tenants not to rent at Presidential City — or to leave once they’ve signed their leases. 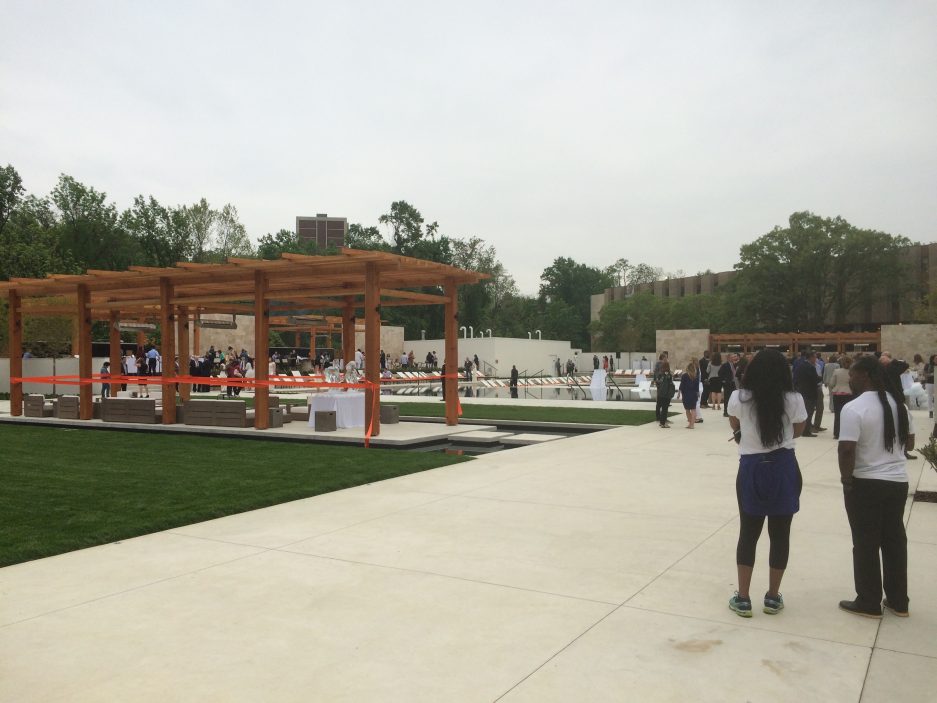 The outdoor scene at the club at the start of the opening party. The stage is set for the ribbon-cutting later that evening. Photo | Sandy Smith 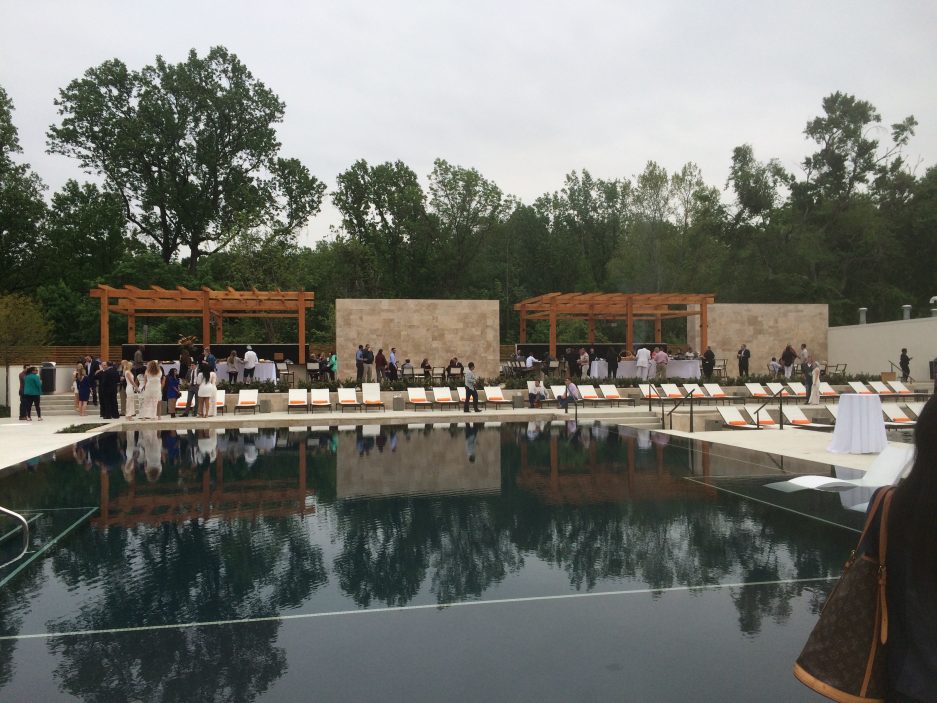 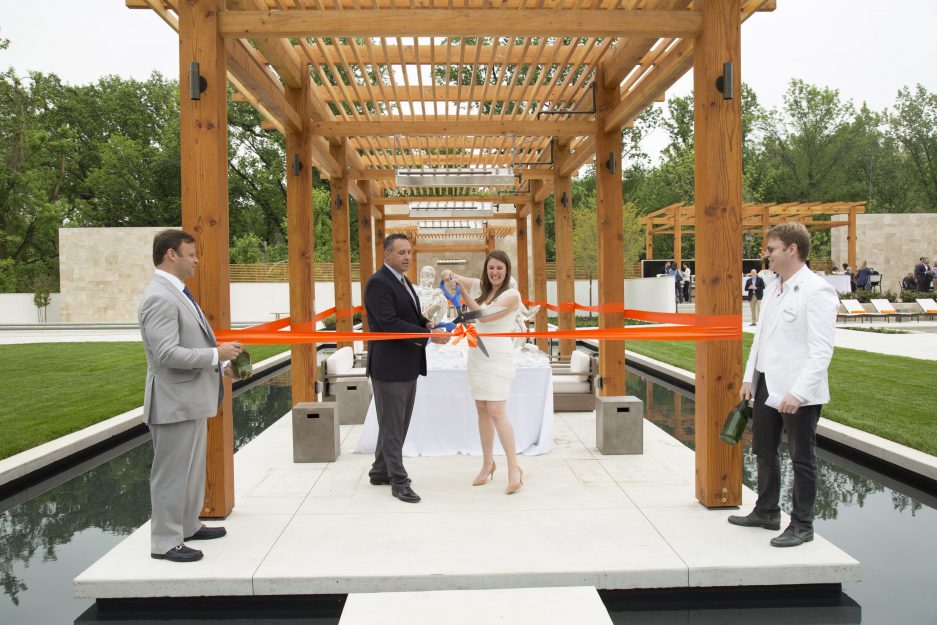 The ceremonial ribbon-cutting. Matt Pestronk is on the left and Mike is on the right. Photo | Courtesy Beckerman Public Relations 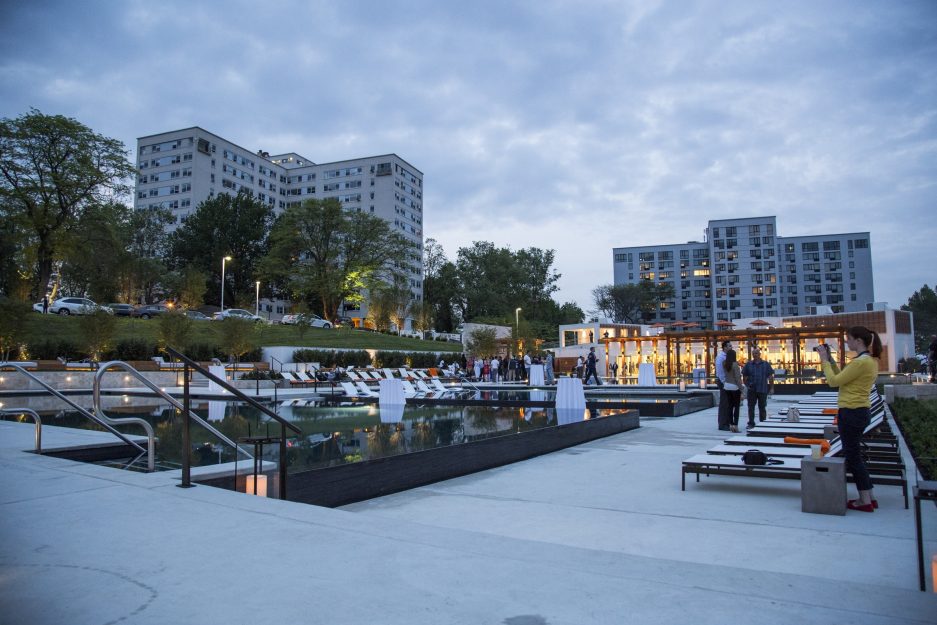 The scene as the party wound down. Photo | Courtesy Beckerman Public Relations 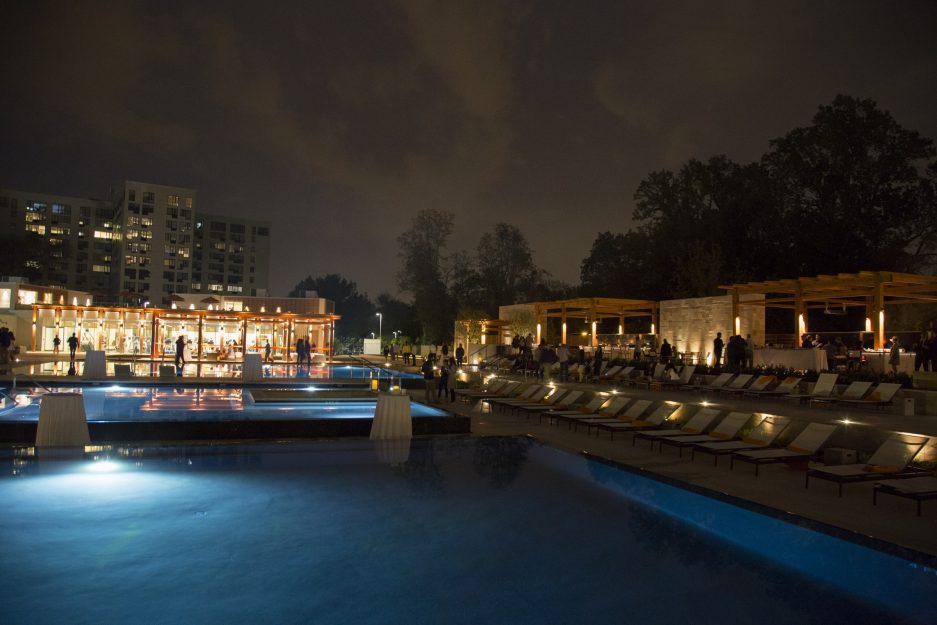 The Sora Pool Club after dark. The facility is available for resident use 24 hours a day, seven days a week; guests of tenants can use the club for a per-day fee. Photo | Courtesy Beckerman Public Relations 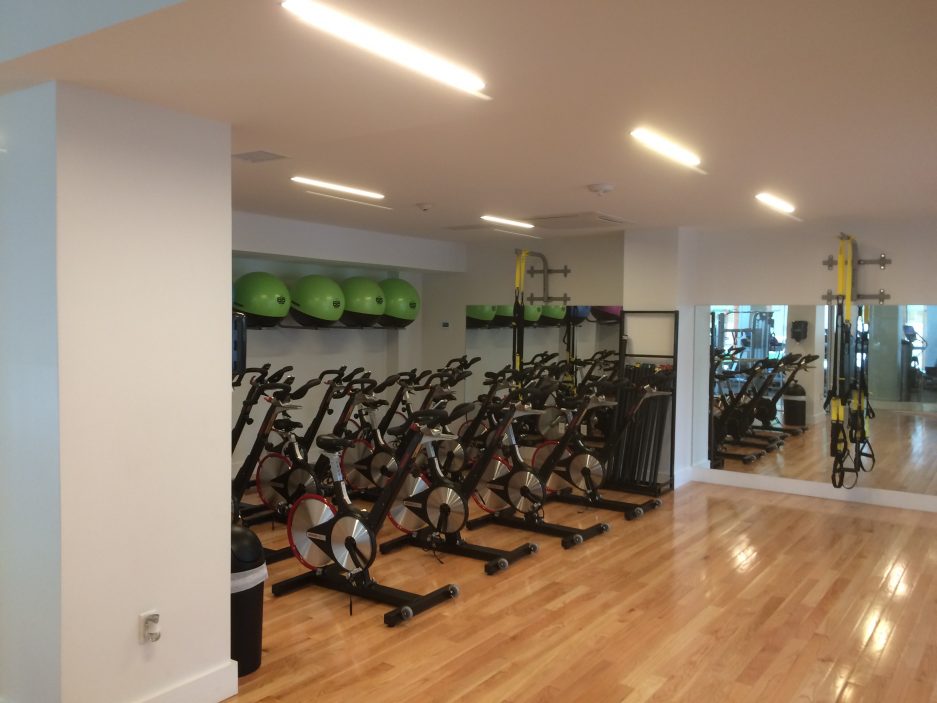 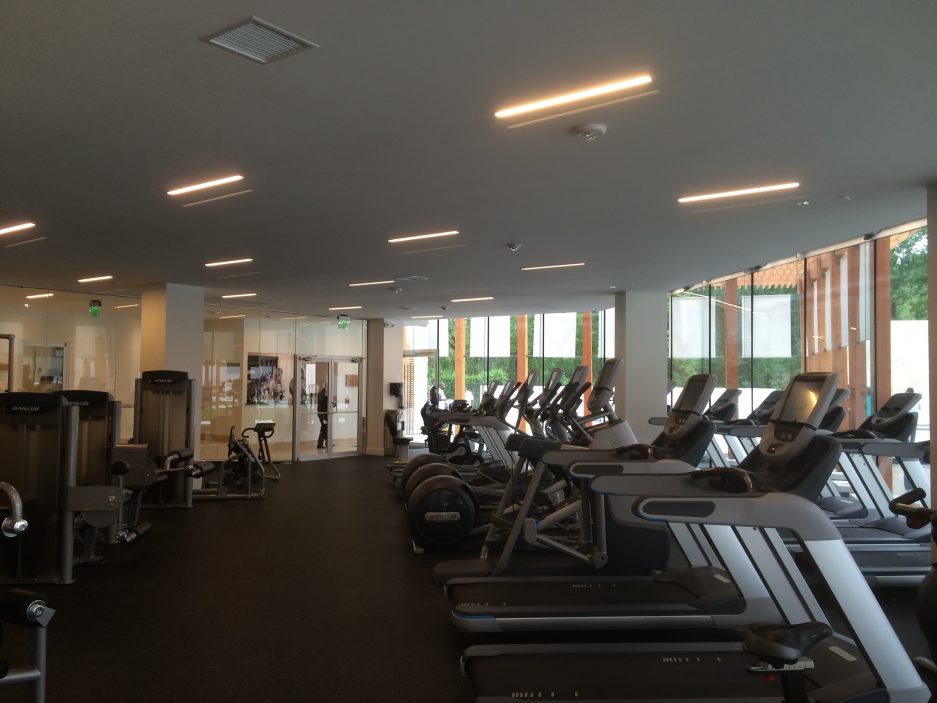 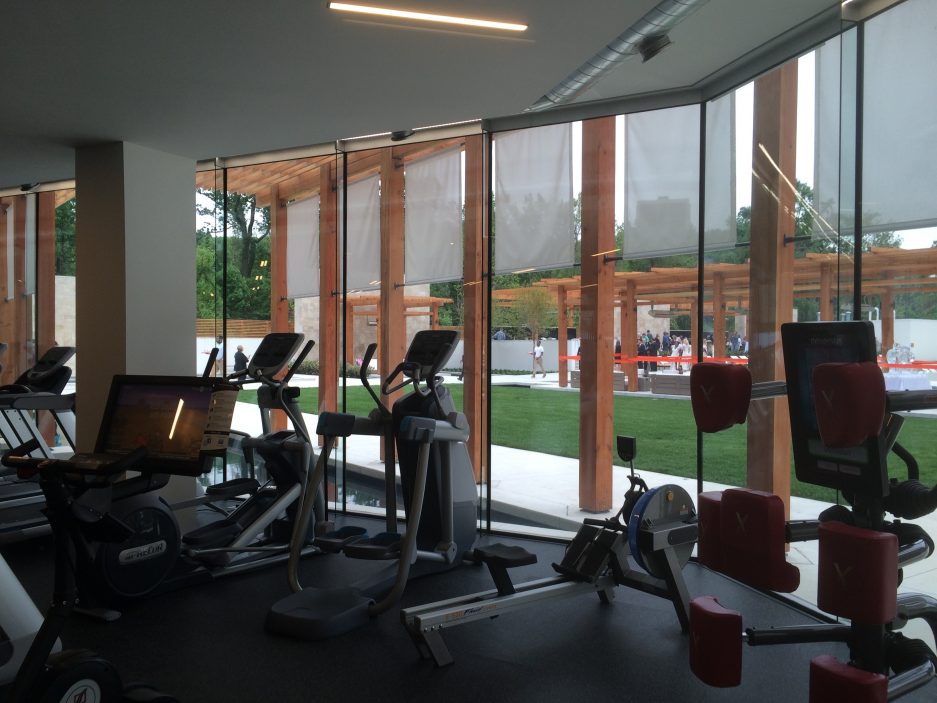 A closer view of the view from the fitness center. Photo | Sandy Smith