The Playground will include 14 music venues, two private clubs, a bowling alley and a massive sports bar. It will make A.C. "the capital of entertainment on the East Coast," says Bart Blatstein. Saying he would make Atlantic City the “the capital of entertainment on the East Coast,” Philadelphia developer Bart Blatstein unveiled his dramatic redevelopment for the Pier Shops at Caesars today. The pier, which Blatstein’s Tower Investments is developing along with casino architect Paul Steelman’s firm, has been rechristened The Playground.

“I promise you, this will become the number one tourist attraction in Atlantic City,” Blatstein said yesterday at a dog-and-pony show at the pier. “I guarantee it.” Later, he doubled down on the pier’s success: “It’s a symbol of what Atlantic City is going to become… With Paul here by my side, this place can’t fail. It won’t fail. I don’t want to want it to sound oysters here, but I have never failed in my career. I have never not picked an area that has not turned around. This is going to be the greatest success of my career.”

Renderings of The Playground in Atlantic City 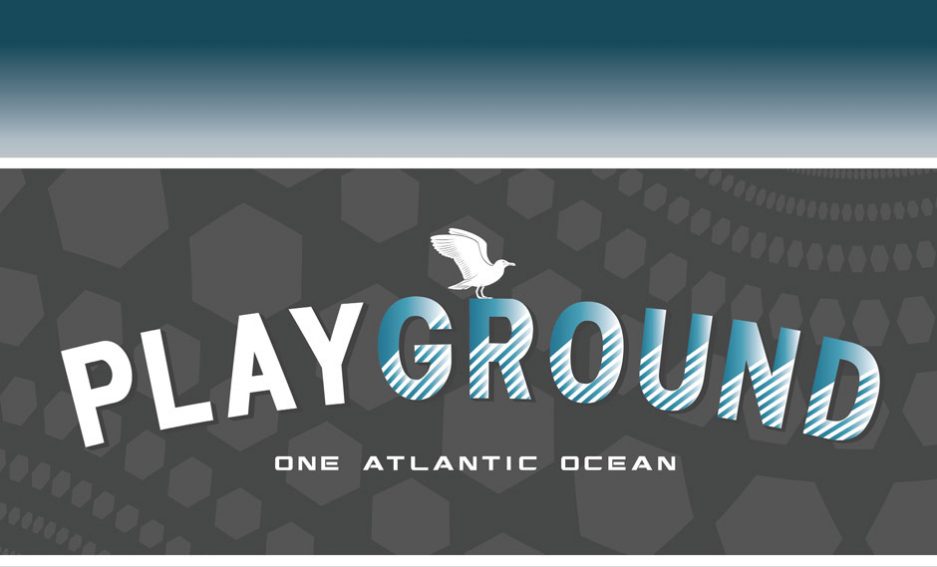 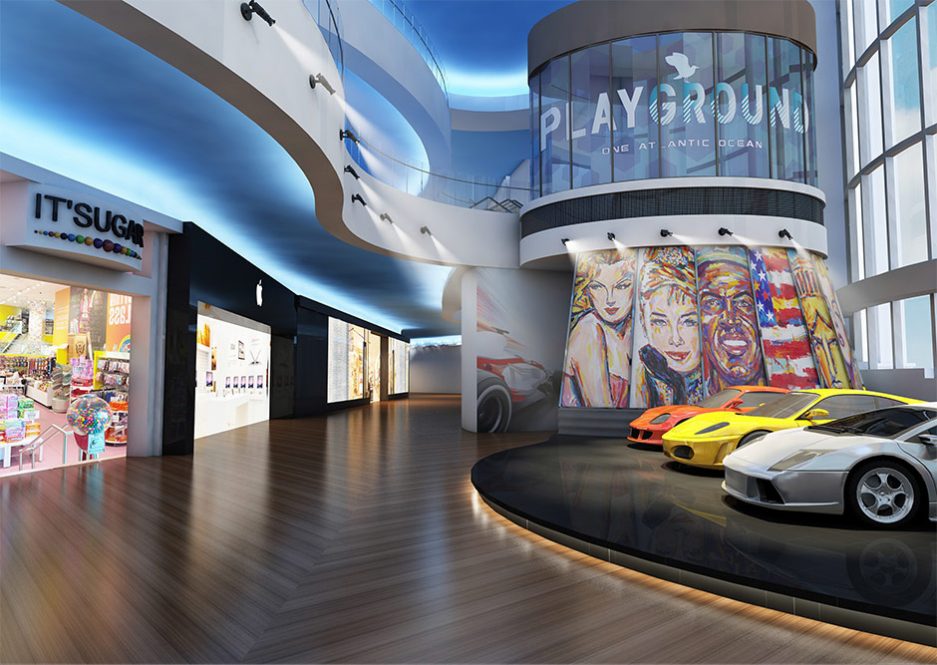 The entrance to the new Playground. "A million dollars of Ferraris" were at the entrance for the media event on Wednesday. (Courtesy Tower Investments and Steelman Partners) 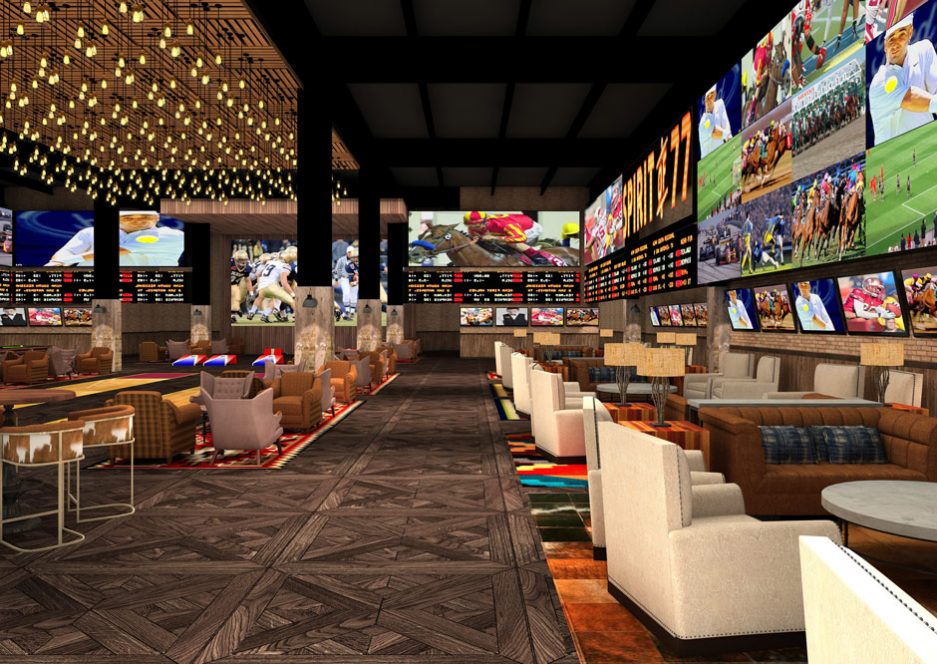 The sports bar, which will be on the third floor of the pier. A different sports bar was at the Pier Shops, but closed several years ago. As seen in this rendering, gambling — or, at least, watching games one has gambled on — may be a component of the bar. (Courtesy Tower Investments and Steelman Partners) 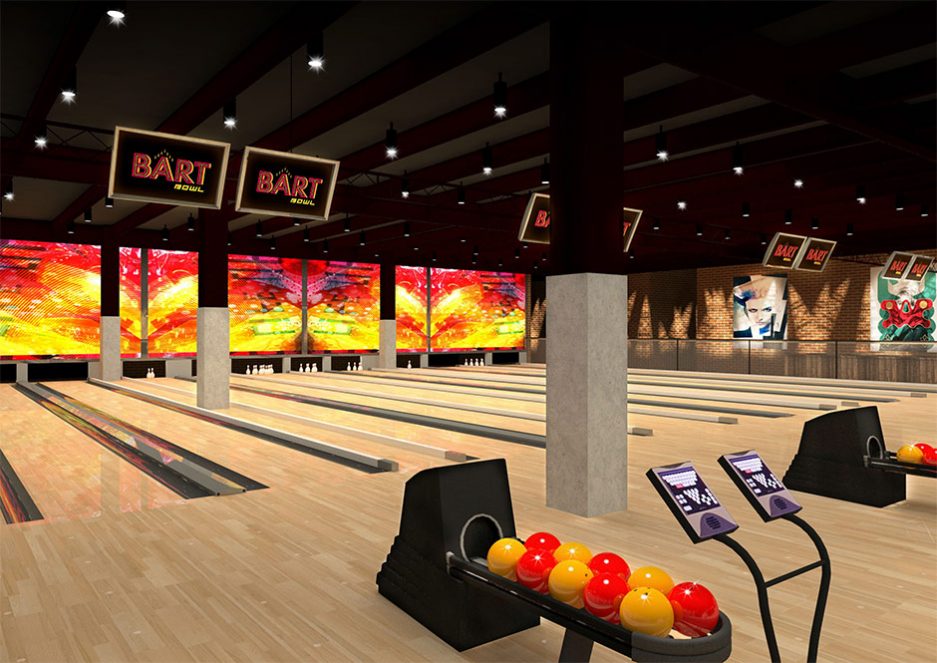 The second floor will have a bowling alley. (Courtesy Tower Investments and Steelman Partners) 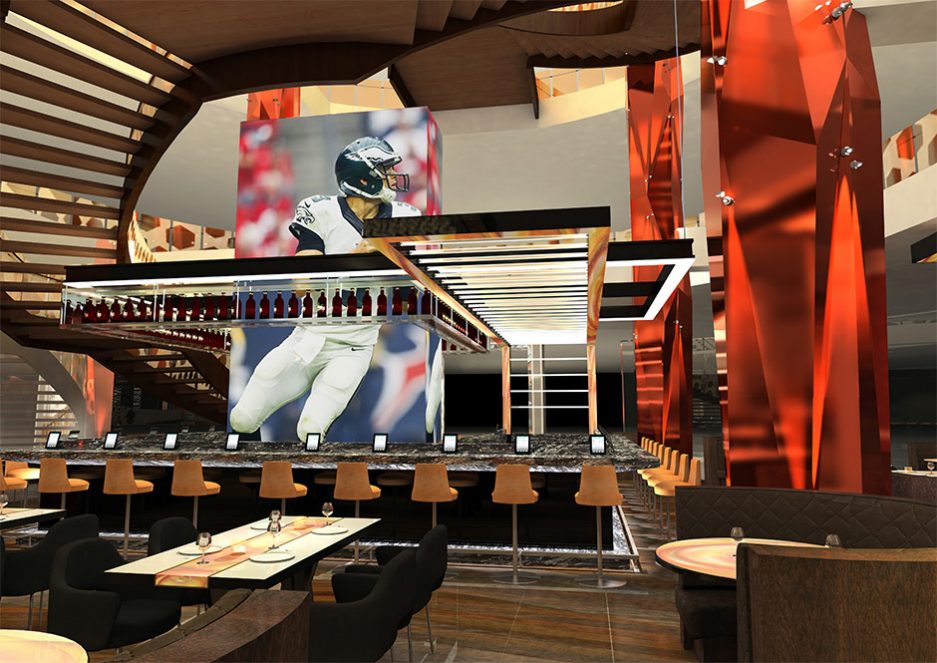 The center atrium will have the Monkey Bar, which is intended as a spot for pre-gaming, per a press release. Also, Mark Sanchez! (Courtesy Tower Investments and Steelman Partners) 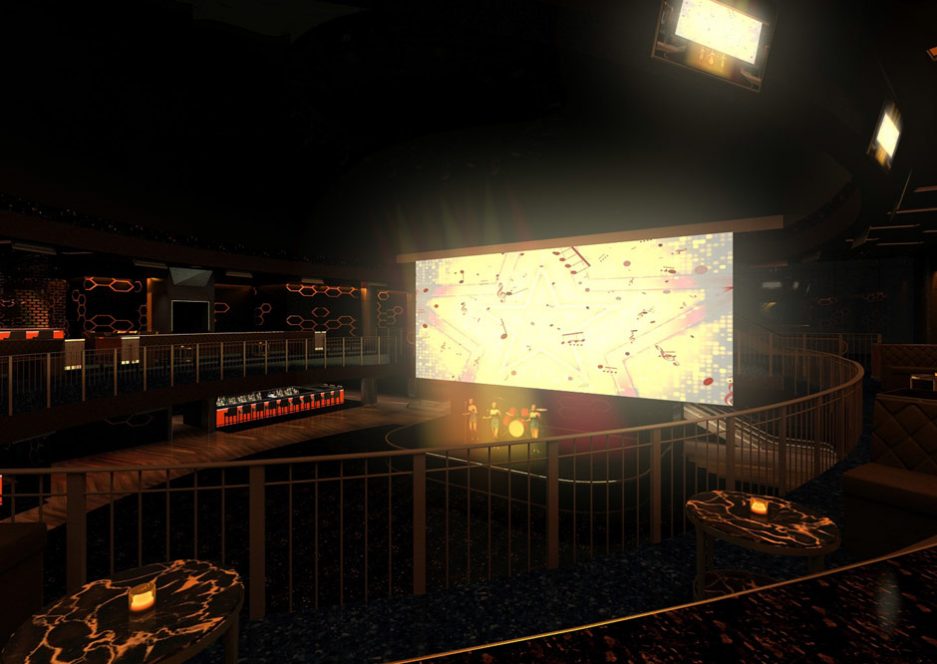 The former water fountain in the back will be renovated into a concert venue named 39N — for the 39th parallel, which Atlantic City sits on. (Courtesy Tower Investments and Steelman Partners) 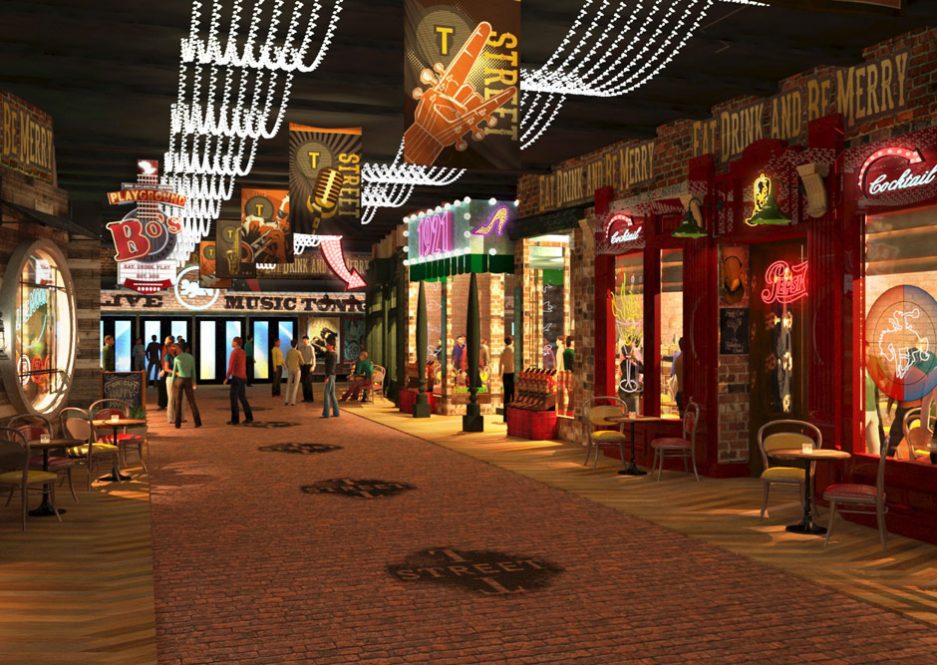 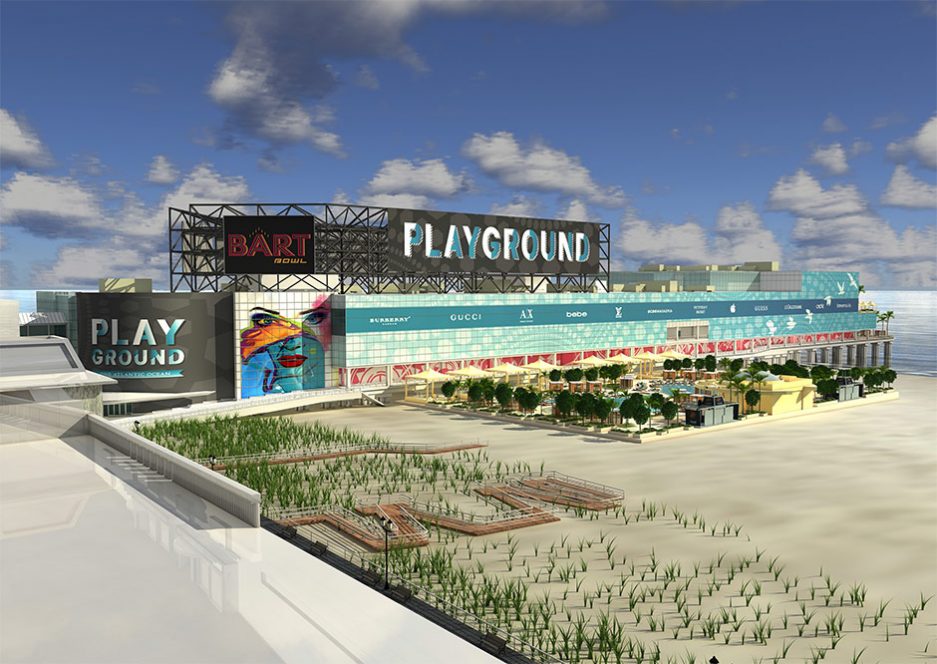 Outside rendering of The Playground

The private beach club, with pools, is seen in the foreground. (Courtesy Tower Investments and Steelman Partners) 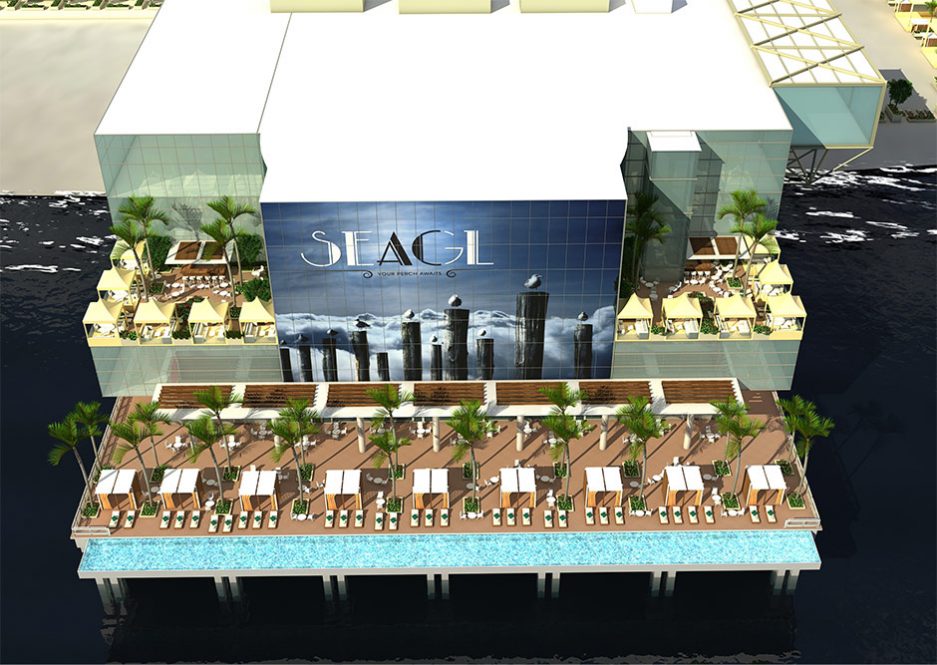 Rear view of The Playground

The end of the pier will be a private club, presumably called Seagl. (Courtesy Tower Investments and Steelman Partners) 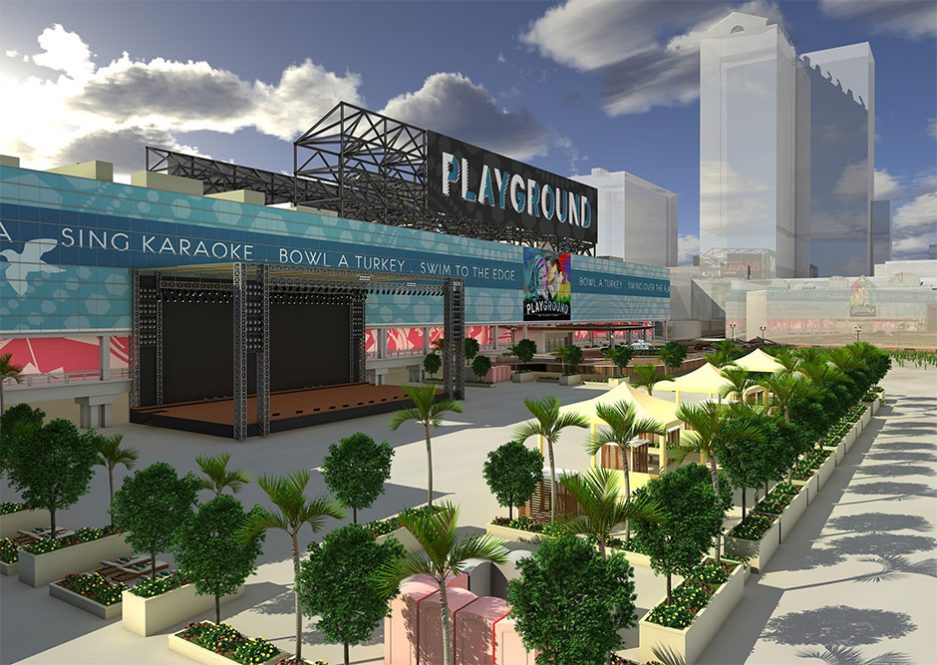 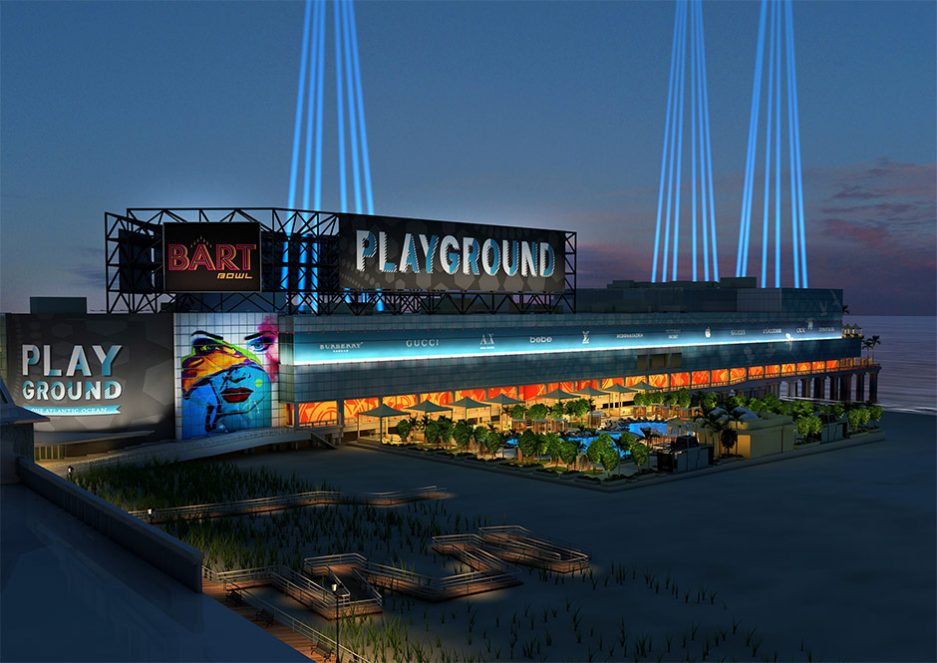 The Playground at night 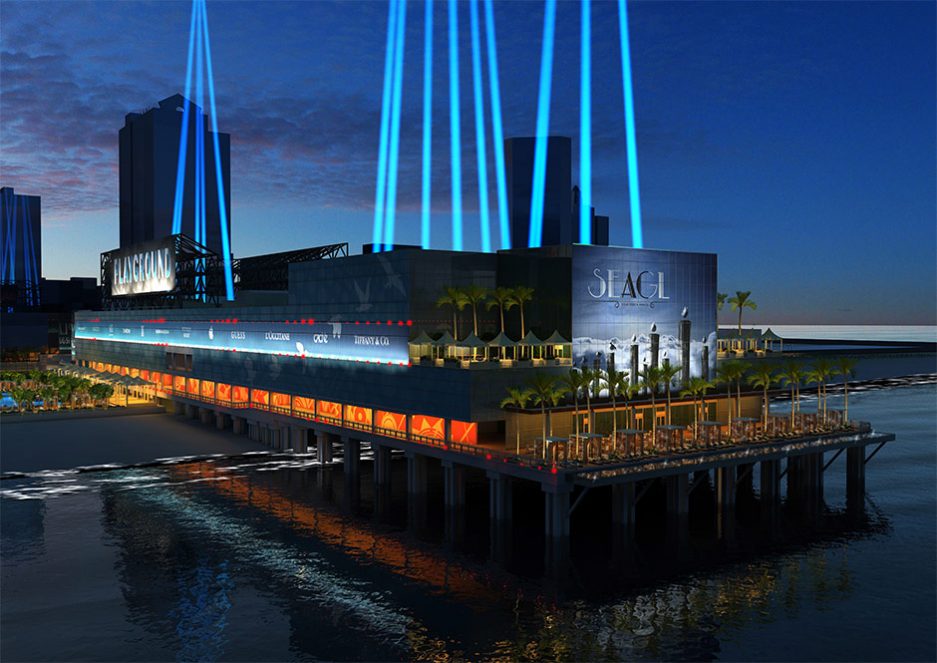 Another view of The Playground at night

Blatstein plans for a massive renovation of the building. The first floor will remain a shopping center, rechristened T Street. Six themed music clubs will be installed on the first floor. Blatstein said there will be 14 music venues in all, with local musicians groomed to play many of the Playground’s venues. “We are going to be the music capital of the east coast, I guarantee it,” Blatstein said.

A large bar, Monkey Bar, will be placed in the center atrium. (Per a press release, this is “the spot for young people to ‘pre-game’ on the first floor.”) The atrium at the pier’s end, which once contained a water fountain, will be re-christened 39 N and be re-done as a stage.

On the beach, Blatstein plans a concert venue that could hold up to 50,000 people — “name acts,” he said. There will also be a private club on the beach with a pool; according to Blatstein, it will be the only pool on a beach in the United States. A second private pool will be located high up on the pier on an upper level.

Bart Blatstein will bring bowling (and alliteration) to the boardwalk with Bart Bowl on the second floor. The third floor will have The Varsity Club, a sports bar. Per renderings, there may be a sports book element if sports gambling is ruled legal in New Jersey. The fourth floor will continue as a private events space. Restaurants still on the third floor, such as Stephen Starr’s Continental and Buddakan, will remain.

Calling the previous mall “poorly designed,” Blatstein said more windows will be installed to open up the pier to dramatic views of the ocean. Philly-based pop artist John Stango will wrap the massive columns that surround the entrance to the pier shops, and three Algar Ferrari of Philadelphia will sit at the entrance. The Ferraris were already there on Wednesday; a DJ played “This Is How We Do It” at one point in the early afternoon.

The mall that’s being rechristened the Playground was originally constructed for more than $200 million, and was expected to attract high-end shoppers. It didn’t work. “Fifty percent of the stores did great, and the other fifty percent look like this,” Atlantic City mayor Don Guardian said as he motioned to empty storefronts in the mall’s rear atrium.

Blatstein bought the mall last year for about $2.7 million. Caesars, which owns the pier but not the mall, sued to prevent Blatstein’s takeover. The two sides settled their differences last month, and Caesars Altantic City Vice President Kevin Ortzman attended Wednesday’s event. Blatstein and Ortzman went “from barely speaking to speaking four/five times a day, calling each other Kev and Bart,” Blatstein joked.

The dog and pony show offered high hopes for struggling Atlantic City. Steelman compared Blatstein to legendary casino developer Steve Wynn; Steelman worked with Wynn on the original Golden Nugget. Blatstein said the T Street and 39N renovations will be completed by July 4th. The bowling alley and sports bar would be open by the end of the year. “Hopefully we get our permits, mayor,” Blatstein said.

When asked about parking, Blatstein said valet parking for the pier would begin next week. Blatstein also said “I would fail” if the venue were going to be like Xfinity Live! Shots fired, Bart. Blatstein says his new venue will keep the 400 current jobs at the mall and add an additional 500.