We Held Our Wedding Two Years Before Getting Engaged

“Our story is unconventional, but it’s different, it’s ours, and we love it!” 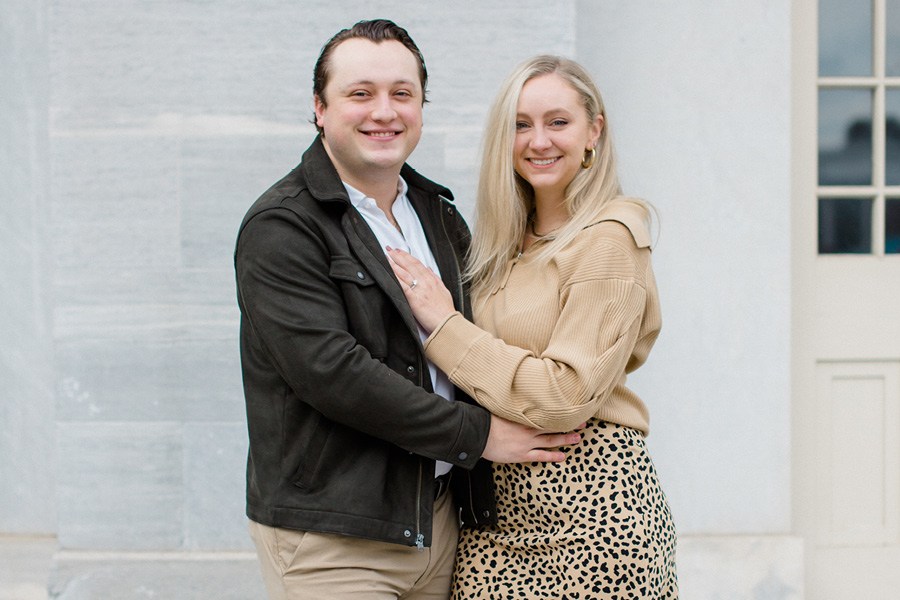 Here at Philadelphia Wedding, we celebrate clever and special takes on proposals, weddings and all of the festivities surrounding the Big Day. So when we learned about this couple, who got married on a whim two years before the engagement, we were intrigued. Below, you’ll find their story and Merchants’ Exchange Building proposal (one of our favorite spots for popping the question) with photographs from Paige Kowal. We think you’ll love it, too. 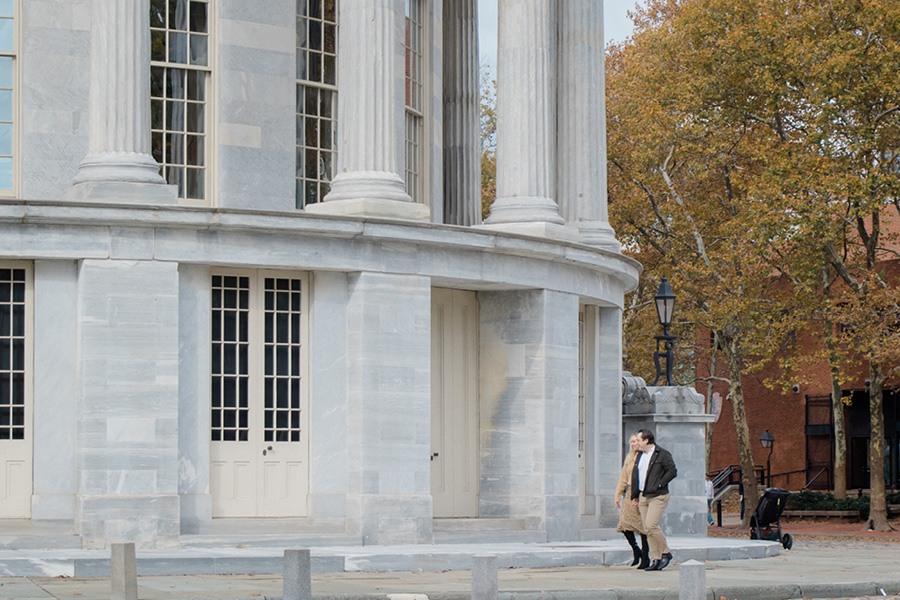 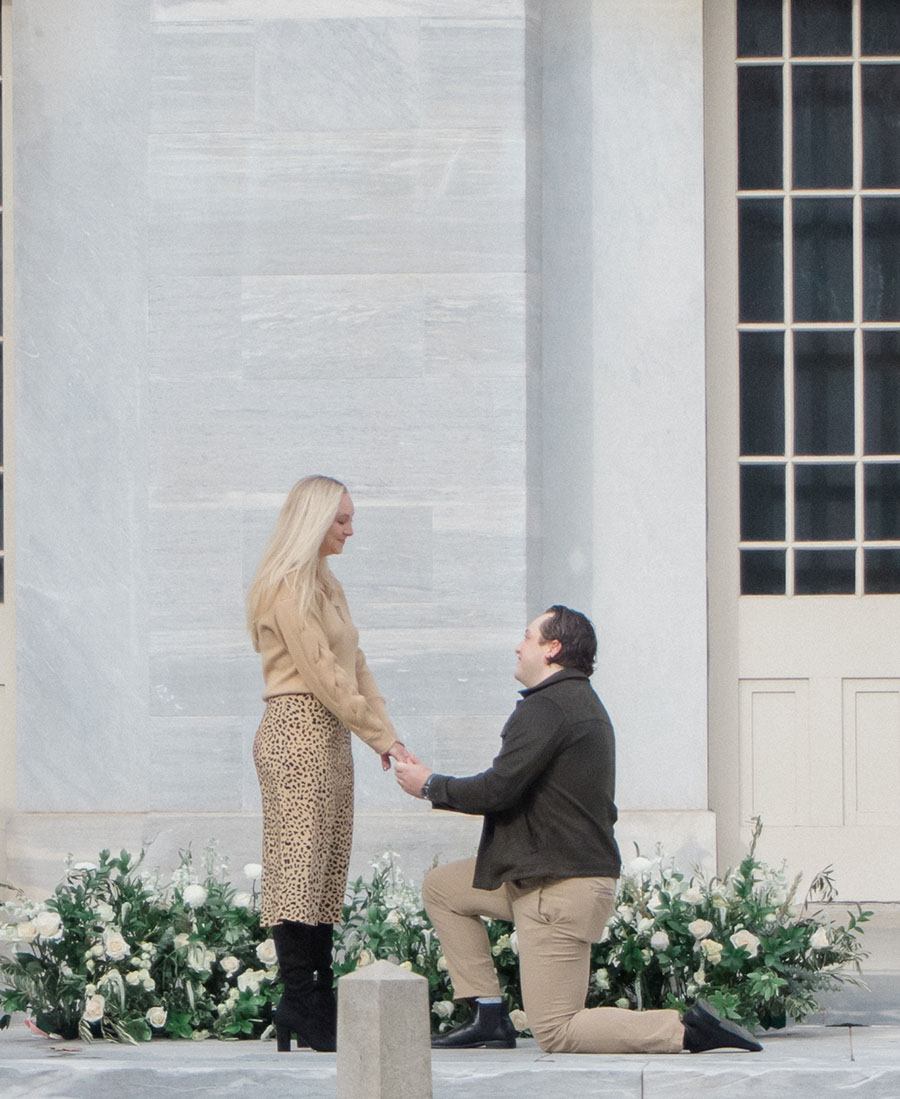 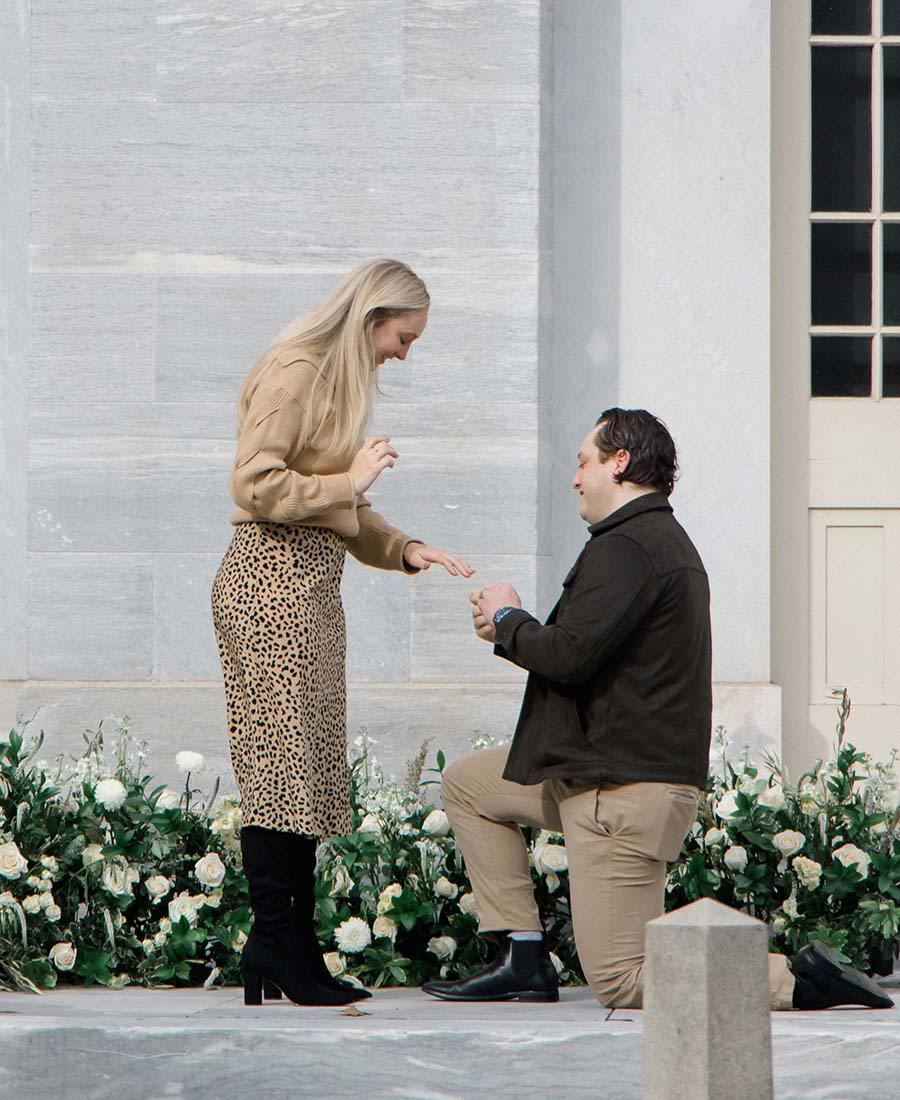 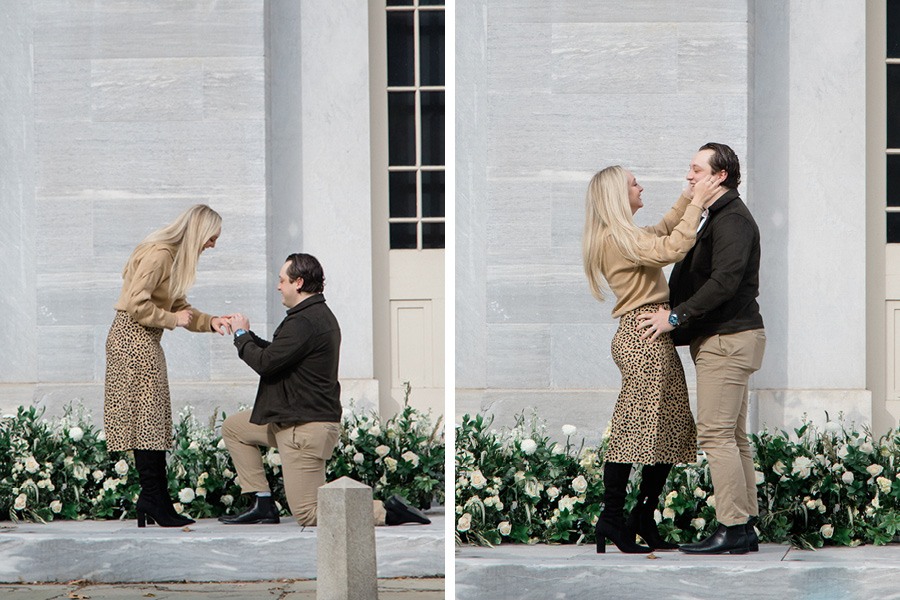 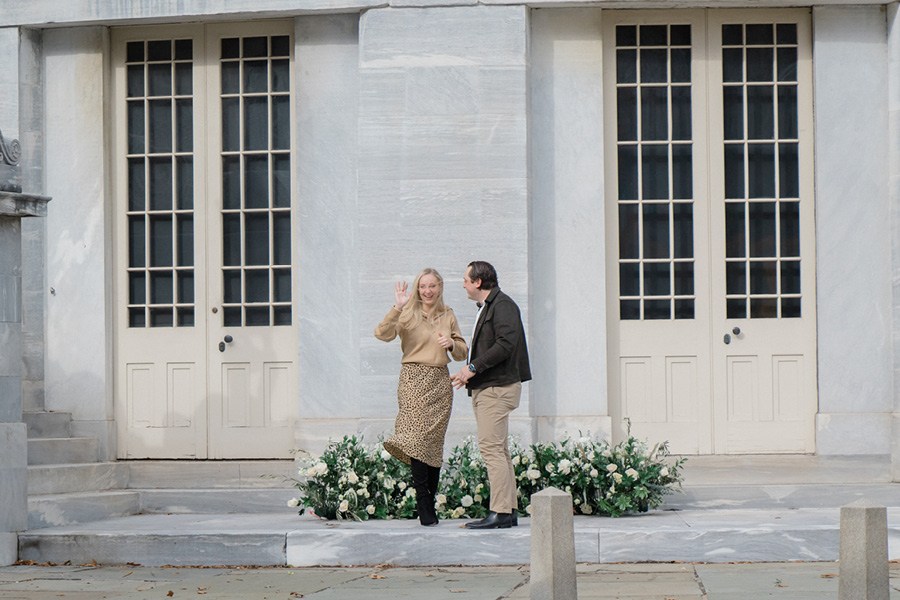 The couple: Dani and Brett Sinclair, both 28, of Brewerytown

How they met: The year was 2017, and Dani had just about enough of online dating app The League. But then she came across Brett’s profile: Not only was he a Canadian hockey player (he had just moved to Philly to earn his MBA at Temple), but he also had a cute dog in his profile picture and a shared love for Bachelor in Paradise. “Cheesy to say, but I knew this was the guy for me and my fur baby Cooper,” she says. And the fate was sealed when Brett started the conversation with: “I need to meet your dog.” Their first date was at Frankford Hall — on Halloween, which they didn’t initially realize. “We were the only two at the bar not in costume; needless to say it was easy to figure out who our date was,” says Dani.

Their one-of-a-kind wedding: They were about two years into their relationship when they decided to get married. Brett’s MBA program was coming to an end, and he had begun seeking a job. But because of his citizenship status, he kept getting turned down. “He was losing hope in the job search, and I wanted the fun part of our lives to start — where we build a foundation together through our work and commitment.” (He currently has a green card and is working on the naturalization process to become an American citizen, but it is not fully official yet.) In just two weeks — with the help of Dani’s best friend, Taylor Castonguay of wedding planning biz Taylor Emily Design Co. — they arranged their small elopement on October 4th, 2019 at the end of Race Street Pier. Only close family and friends were on hand, but Dani says it was “super-short, sweet and perfect, with a cotton-candy-colored sky during the golden hour.” Afterward, they went to Jaxon (now Ken Love’s) to celebrate. 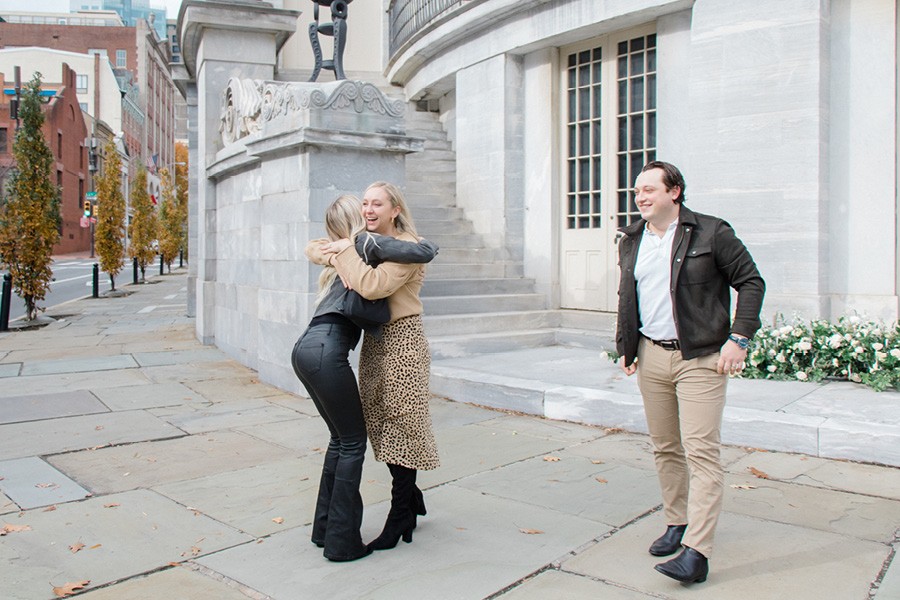 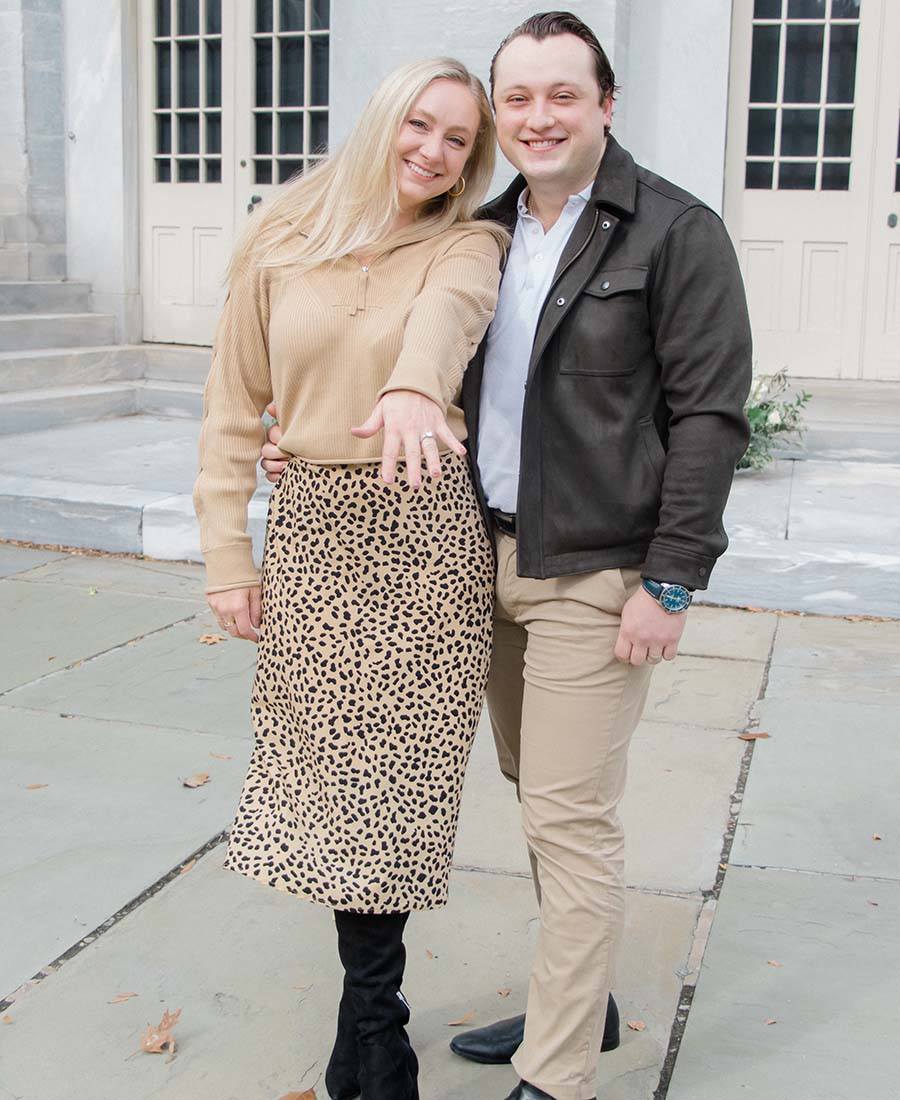 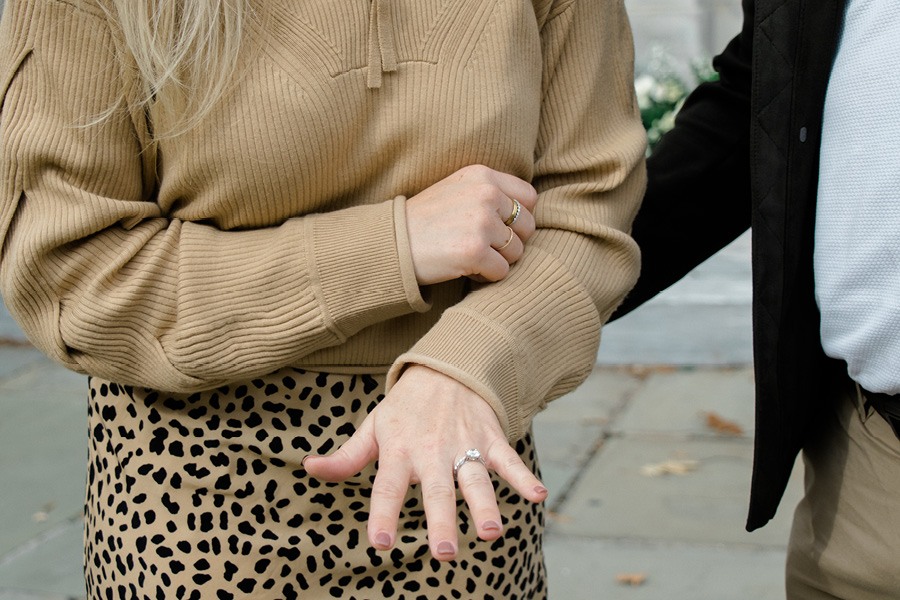 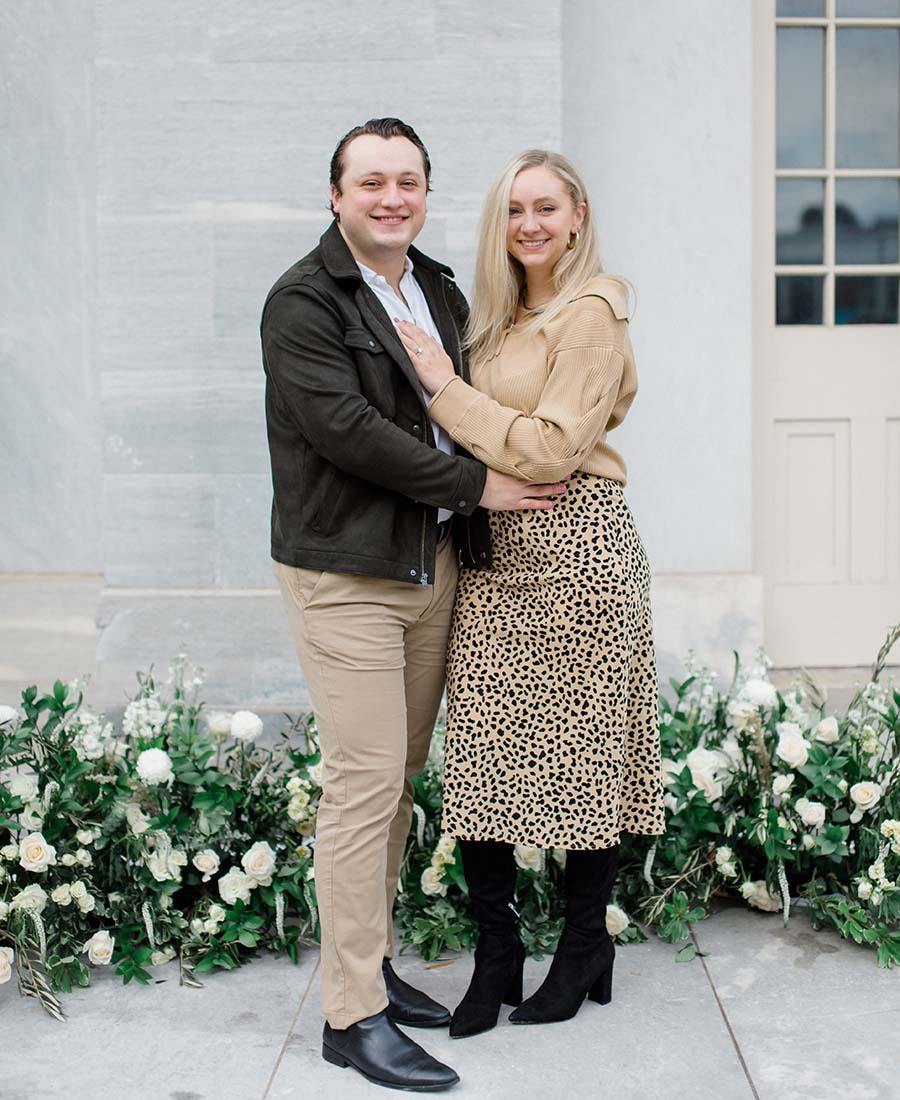 The post-wedding proposal plan: Because of their quick timeline, there wasn’t much room for a proper proposal or wedding ring, though Dani always wanted one later — when it made sense to them. Brett made it happen on November 13th, 2021, and used a friend’s “pre-wedding celebration” brunch at Positano Coast as a decoy. “We had been planning the brunch for a while, so I didn’t think anything of it,” says Dani. Brett again enlisted Castonguay to help him set the scene at the nearby Merchants’ Exchange Building as well as photographer Paige Kowal to snap the occasion.

The big moment: When their Uber dropped Brett and Dani off near Positano Coast, Brett took Dani’s hand and led her to the Merchants’ building, where a sweet floral display had been set up. He got down on one knee and (finally!) popped the question with what Dani, who started crying immediately, calls a “beautiful little speech.” Their planner and photographer then emerged from their hiding spots and treated the couple to a photo sesh around the city.

Dani’s reaction: “Even though Brett and I had just celebrated our two-year anniversary a few weeks before, I was so emotional for the engagement,” she says. “It’s been something I’ve always dreamed of, and I was just so impressed that Brett pulled all of this off without me knowing.” 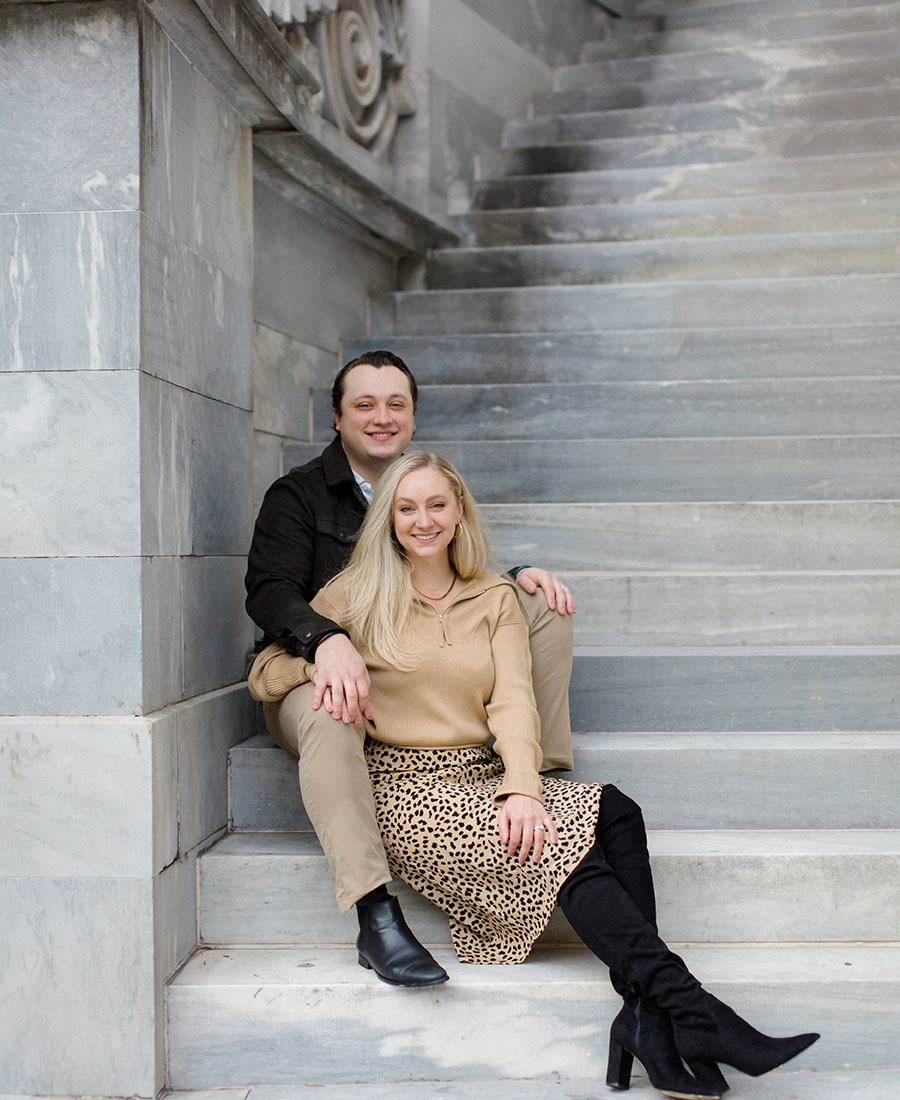 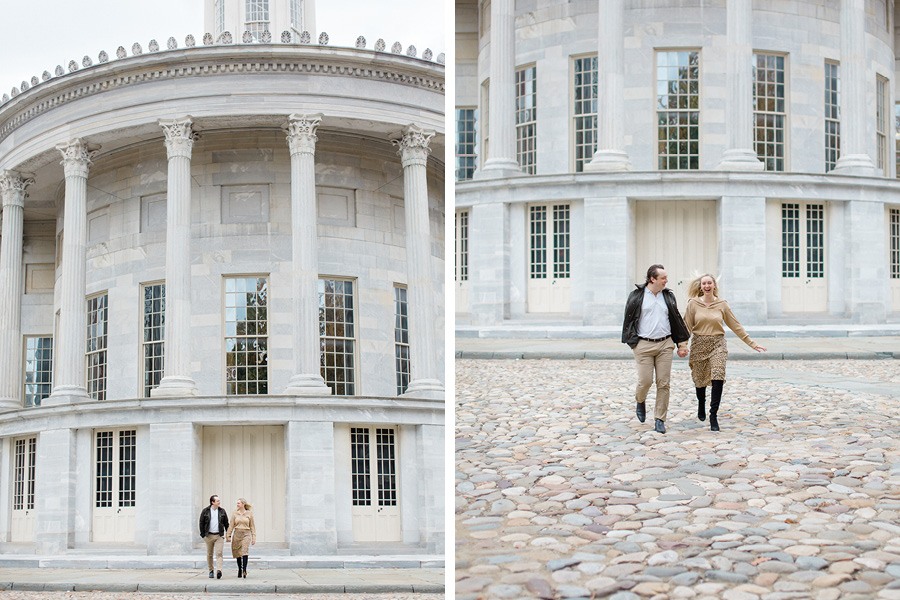 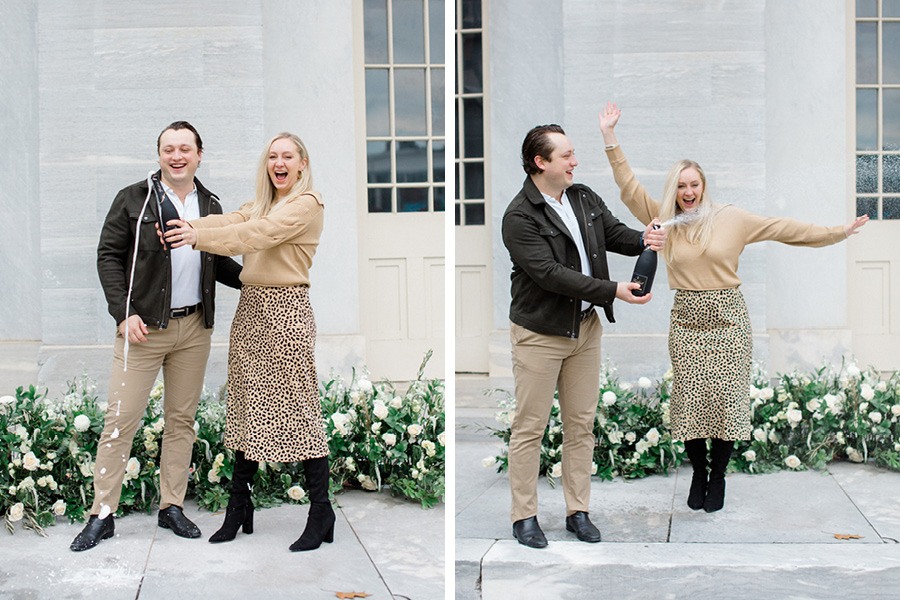 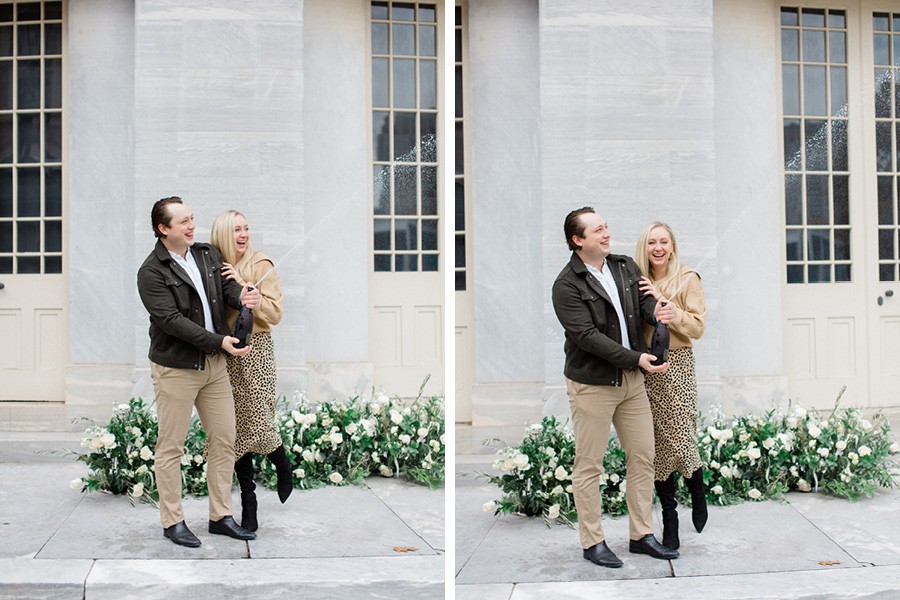 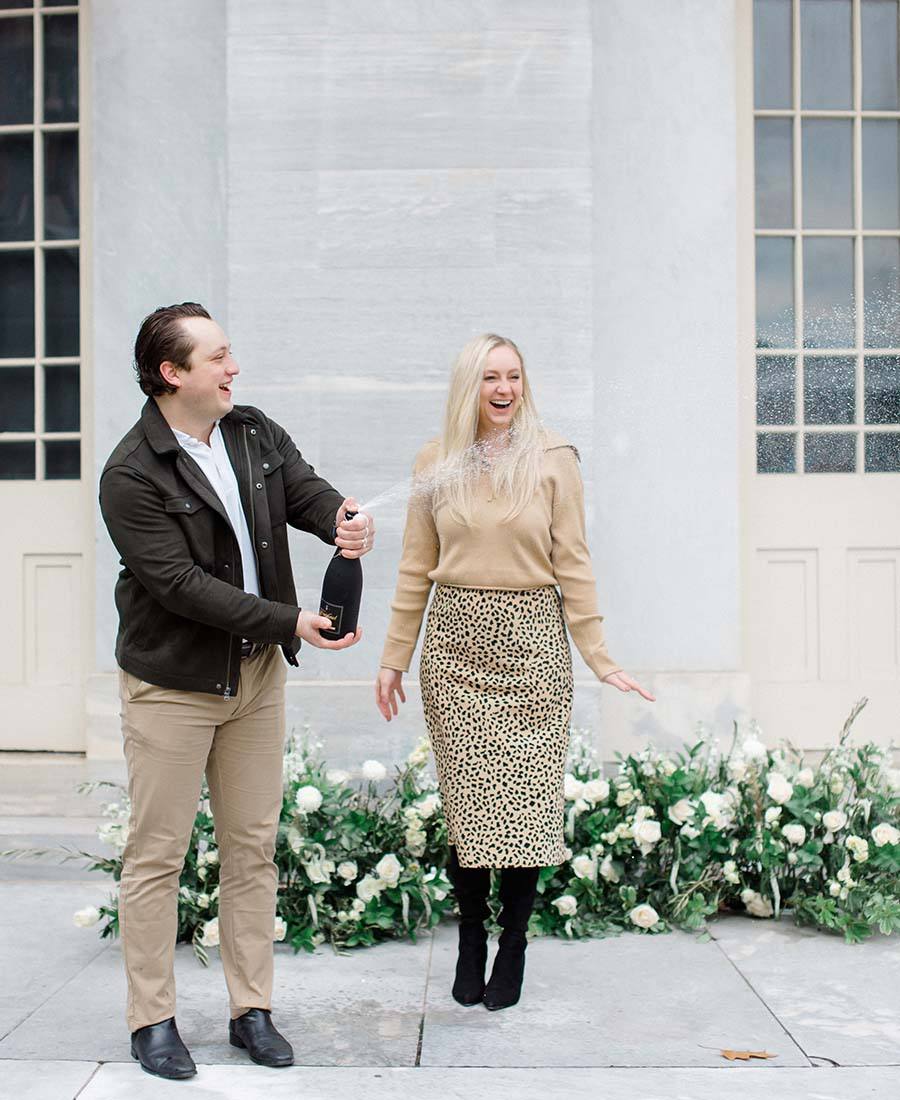 Brett’s reaction: “Even though we were already married, I was nervous,” he says. “Not so much that she wouldn’t say yes, but because Dani is very intuitive, and she usually knows when something is different. Trying to conceal this was a triumph in itself. And, as a perfectionist, I wanted to make sure everything went exactly the way we planned. As soon as I put the ring on Dani’s finger, I was overwhelmed by the applause of onlookers and friends. It was a moment we’ll remember for the rest of our lives.”

The post-proposal festivities: Remember that brunch? Well, it was actually for Dani and Brett. He had arranged for Dani’s mom and sister to fly up from Florida; her aunt and cousin came in from New Jersey, and 14 of their friends from around the Northeast gathered to celebrate. 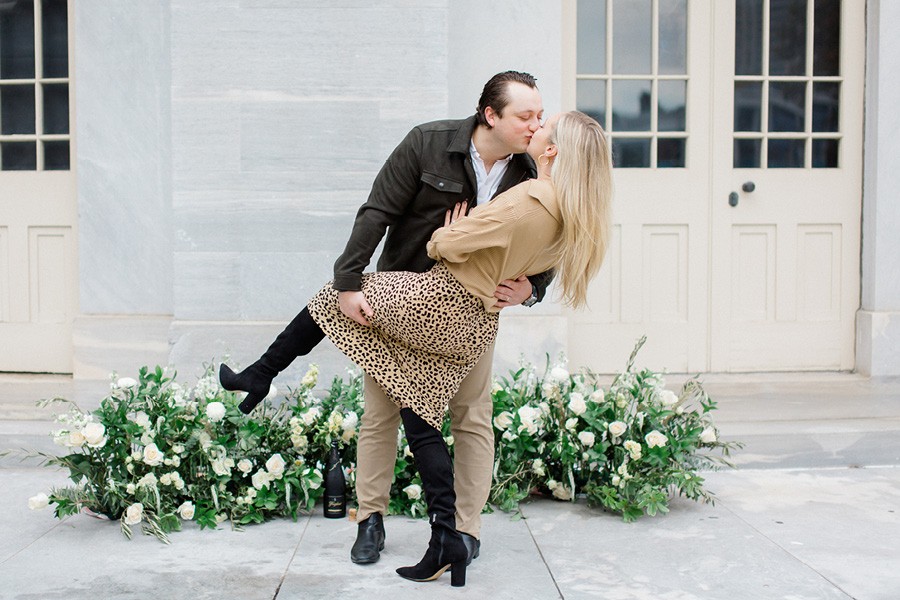 Their future plans: The couple hopes to renew their vows in Lake Como on their five-year anniversary; they are scoping out villas that can host a 70-person event. In the meantime? “Our story is unconventional, but it’s different, it’s ours, and we love it.”